“9-1-1: the three numbers that signal emergency. We dial those numbers expecting help – but what if that help can’t get there until it’s too late? It’s a situation paramedics say is happening too often. Eleven paramedics have spoken out to Global News, putting their jobs on the line to sound an alarm about the crisis facing Edmonton’s ambulance system.”

“As the mercury is dipping lower, the AMA is being flooded with calls, mostly from Edmontonians who have just heard the painful sound of their car not being able to start.”

Yes, I am well aware of that painful sound :(

I REALLY need to get on having this emergency bag in my car, lol. (And as should you!)

“Some Canadians are pledging to join Wikipedia and other prominent websites in going black on Wednesday. The self-imposed blackout is a protest against proposed anti-piracy legislation in the United States that could have far-reaching effects for Internet users and companies around the world.”

Lol, taking down my website won’t do very much but I do stand in solidarity against SOPA!

“Men, and not just women, need to be aware of the “reproductive consequences” of postponing parenthood, new national guidelines on the risks of delayed child-bearing warn. Though women especially should recognize that their “fecundity and fertility” starts to decline precipitously after 32, a man’s semen quality and fertility also worsens with age.”

“Most men don’t give much thought to their prenatal care, but, according to male-fertility experts, what guys do now could make the difference between becoming a dad or not…. Among the more common sperm-killing behaviours guys engage in are keeping cellphones in pants pockets, and working with laptops on their laps, which raises sperm temperature.”

I always warn my guy friends about working with laptops on their laps!! Always have a pillow or laptop cooler in between!!!

Including “Astasia-Abasia patients are always on the verge of falling” – “Palinopsia patients literally cannot unsee things” – “Amelodia patients can never name that tune” and more!

“Italian coastguards pleaded angrily with the captain of a stricken super-liner to return to his ship, according to recordings released on Tuesday as divers found five more bodies in the half-submerged wreck of the Costa Concordia.”

What a bad, bad, ship captain…

“The continued use of a generic, uninformative “check engine” light in cars keeps car owners in the dark about the condition of their vehicle, and ensures they stay dependent and subordinate to car dealers and mechanics. The frustrating thing is it doesn’t have to be that way.”

Lol. Perhaps more heated and passionate than necessary but it’s true – the check engine light has duped me many a time in the past.

“Some random thoughts about journalism school curricula, programmer-journalists and the future.”

A really interesting read. Especially intrigued with the “journalism minor for a computer-science major” kind of education. Will it be seen in the near future? Journo-developers do appear to be in demand lately.

“The J-Source Canadian Newsperson of the Year award will honour a Canadian who has demonstrated excellence and had a positive impact on the quality of journalism in their community or across the country, perhaps innovating the way news is gathered and told, inspiring journalists, educators, and the Canadian public.”

Global News digital leader Andrew Lundy gets a nom, locally Jana Pruden with the Edmonton Journal gets a nom, sounds like everyone on the list have been doing great things in journalism this year.

“Thus, behold, People of the Internet… the ten most important words you should learn to pronounce, if you would like to appear reasonably knowledgeable about your own language.”

Including “athlete” – “etcetera” – “candidate” and more. Though “interesting” is not on the list. I always hear people say “in-ter-esting” and I’m sure that’s the wrong way… lol. (I say it “in-tresting”)

“The Colbert Super PAC — recently renamed The Definitely Not Coordinating With Stephen Colbert Super PAC — has released a new ad appealing to voters in South Carolina… it encourages South Carolina residents to vote for another Republican in the upcoming primary — Herman Cain. ‘A vote for Herman Cain is a vote for America,’ the ad says. ‘He’s such a Washington outsider, he’s not even running for president.'”

“Do you remember that Steve Jobs action figure that was recently up for pre-order? You know, the one that looked so much like the late CEO that it creepily merged the Silicon Valley with the Uncanny Valley? It is no more. The company that was manufacturing the figures, In Icon, has announced that it is cancelling the launch of the Steve Jobs doll… Apparently the lawyers of Apple and Jobs applied immense pressure, and In Icons decided to cancel it ‘out of heartfelt sensitivity to the Jobs family.’ … The few models of the Jobs figure that are available are now hot collector items that have skyrocketed in value. ”

I can imagine people would be paying big, big bucks for the few models that are out there!

“The normally staid Google is channeling its inner I Can Has Cheezburger with a new feature that lets you create your own LOL-ish memes on Google+.”

LOL. Well done, Google. This does lure me slightly into wanting to get on Google+ more. Haha.

“Broadway shows are expensive, so just watch this dude instead.”

Lol. He is very impressive. 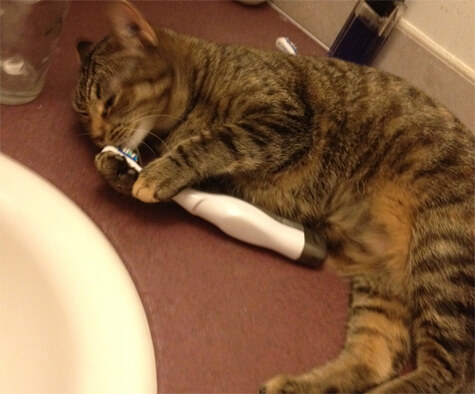 Thor brushing her teeth by herself this morning. My cat is so special.

Linda Hoang is a Canadian blogger based in Edmonton, Alberta, who writes about travel, food, lifestyle and pet topics. She's also a seasoned social media/digital strategist with a journalism background, the founder of the Edmonton International Cat Festival and co-founder of Stop Race Based Hate, an online anti-racism education tool. Linda loves exploring the world with her partner Mike, eating their way through cities, supporting local businesses, and photographing Instagrammable Walls. Linda is a fur-mom to two cats and two dogs.
PrevPreviousClicks of the Day: Monday, January 16, 2012 Edition!
NextClicks of the Day: Wednesday, January 18, 2012 Edition!Next