“The New York Times launched a new commenting system this week that has a number of features, but by far, the most significant one is that certain readers with a history of good behavior will be awarded “trusted” status, which allows them to post comments without having them moderated.”

“Your grandparents just might be right: young people are selfish and don’t volunteer enough and – brace yourself – they have the data to prove it. The Canadian Survey of Giving, Volunteering and Participating released in 2010 shows that generation Y is underrepresented in the not-for-profit sector.”

I should volunteer more.

“The politician unveiled a private member’s bill to create a universal cell phone charger for all new phones. The idea behind the move is to reduce e-waste.”

And improve convenience. Apparently Europe has a rule like this implemented already. Everyone has to be adaptable with MicroUSB and even Apple has to include a MicroUSB adapter in their box.

“Is the world’s largest social network acting unsocially? Facebook shared a list Tuesday of what it called “The Most Shared Articles of 2011,” which purports to measure the year’s most talked-about stories. But the list is missing some of the most intriguing news stories of the year as reported by some of the world’s largest news organizations — including FoxNews.com, MSNBC, AOL and others — leaving some observers scratching their heads.”

“The doctors-to-be were given seven scenarios, five of which required hand-washing: before contact with patients, before preparing IV fluids, after removing gloves, after contacting patients’ beds and after contact with vomit. (The other two scenarios did not require hand-washing.) Only 1 in 5 students correctly identified what to do in all seven situations.”

“With the seemingly endless amount of content available online, it seems that more young adults are booting up their laptops and tablets to simply wander around the digital wasteland of silly cat videos, Internet memes and Web comics.”

Lol I can relate to that finding.

“There are so many infographics on the Internet that some bloggers are lashing out against the trend, and there’s even a subset of infographics mocking the uselessness of infographics… Infographics are incredibly useful for cutting through today’s data overload, but their proliferation puts them at risk of being overused, and their impact diluted.”

Interesting read on infographics! I loved them for a time but as the article points out – there’s so many being spit out now that it’s making it seem silly. I’ve come across a lot of pointless and/or poorly-depicted ones, but there have been some really great ones too and it really can be a great way to convey points quickly and in an easy-to-digest manner. (But then there are ones that make me close out of them immediately because it looks way too complicated to digest the information). Do you love/hate infographics?

“‘The digital arena is fast moving, and from a recruitment perspective we acknowledge the need to engage with prospective candidates in new and innovative ways.'”

Hackers are a hot commodity.

“The law doesn’t stop fisherman from catching sharks entirely, but it does make it illegal to take the fish back in pieces.”

Good first step. Everyone should do it.

“Republican presidential hopeful Herman Cain told supporters Saturday that he is suspending his presidential campaign, which has become hobbled in recent weeks by allegations of sexual harassment and an Atlanta woman’s claim that they carried on a 13-year affair.”

I saw a tweet about this that said “Cain is suspending his presidential campaign because nothing happened” – which I agreed with. There is no way all of the allegations against him are lies. He should fess up.

“‘I believe these words came from the Pokémon movie… Life can be a challenge. Life can seem impossible. It’s never easy when there’s so much on the line. But you and I can make a difference. There’s a mission just for you and me.'”

“Patricia O’Byrne, 54, was locked in a custody battle with the father of their 20-month-old daughter in May 1993, when O’Byrne allegedly fled with the child. An arrest warrant was issued in June 1993.”

This is a really crazy story. I don’t understand how she was able to flee, change her identity and hide so well for 18 years. It’s crazy that the dad/the kidnapped girl’s brother never gave up hope over the years.

“The vast majority of people would sacrifice one person if it meant saving the lives of five, according to a study released on Friday.”

Seems logical. If you had to save one group or the other, obviously try and save the greater number of people.

Lame-os. Get with it, guys.

“Surveillance companies like SS8 in the U.S., Hacking Team in Italy and Vupen in France manufacture viruses (Trojans) that hijack individual computers and phones (including iPhones, Blackberries and Androids), take over the device, record its every use, movement, and even the sights and sounds of the room it is in.”

Well, we all know there’s no such thing as privacy any more, unfortunately.

“‘For the first time, we have found that a sample of randomly assigned young adults showed less activation in certain frontal brain regions following a week of playing violent video games at home’ … ‘The findings indicate that violent video game play has a long-term effect on brain functioning,” Wang said. “These effects may translate into behavioral changes over longer periods of game play.'”

News the violent gamer does not want their parents to find out about.

“Alberta health officials are retesting more than 1,700 diagnoses made by an Edmonton pathologist who allegedly misread samples taken from dozens of cancer patients.”

Such a bad situation.

“The world’s most popular online video service now sees itself as a descendent of cable TV, with millions of channels rather than hundreds — and it’s doing its darndest to encourage you to use it that way.”

Yay/Nay? Do you like the look? If Facebook has taught us anything it’s that it doesn’t matter if you do or don’t like it anyway, lol.

“Police in Vietnam have given a whole new meaning to the term “dragnet” – in a bid to end dangerous illegal motorbike street racing they are using fishing nets to catch their prey.”

“Users of smartphones and tablet computers are starting to get high-tech blues, as increasing numbers of the techsavvy are coming down with ailments from “text neck” to “text thumb” injuries.”

Lol, these are first world problems.

“Two retailers that have shown they can deliver big profits in times of economic stress will post results this week.”

“We expect RIM’s performance to deteriorate in future quarters and have little hope for a recovery from the new BBX platform.”

“Throwing a successful Christmas party means choosing the right music mix… ‘Everyone’s got a different flavour, so you have to be able to mix it,’ Harman B says. ‘Our knack is reading the crowd. We don’t really come in with a playlist. We read the crowd. If it’s not working, you have to move. You can tell when people leave the dance floor. But if they’re liking it, they’re moving. If it’s going really well in one direction, you go harder.'”

Lol, Harman B DJed at the Shaw/Global Christmas Party on Saturday and he was awesome!!! Great music.

“There were no knockout punches during the NDP’s first leadership debate Sunday in Ottawa, but those watching were left with a better impression of who could sell the party’s message.”

Pretty passive debate, lol. Who will be Jack Layton’s successor?

“Men may be helping more in the home but working women still do more multitasking in U.S. families than their partners and are finding it stressful, according to a new study.”

I am an expert multi-tasker.

“Is it helping or hurting our toddlers when we hand off our gadgets?”

Good read on a topic that seems to be popping up more and more as we all get more digital. Can’t imagine how plugged in my child is going to be.

“The idea is to celebrate the ‘fragile beauty of this short-lived unit of time’… I’m amazed by what people have managed to cram in to a single second, and what’s striking is the range of emotion and feeling you can convey in such a short space of time.”

Really cool video. It is amazing what can be conveyed in just a second of video! What a cool project.

“West Vancouver’s Park Royal shopping centre is launching a radio station that will cover just one topic: parking. The new low-wattage broadcast, due to go live Dec. 3, will direct drivers arriving at the mall to free spaces in the facility’s sprawling parking lot as part of a multifaceted attempt to clear up the maddening traffic snarls that appear around the centre during the frenzied Holiday shopping period. ” 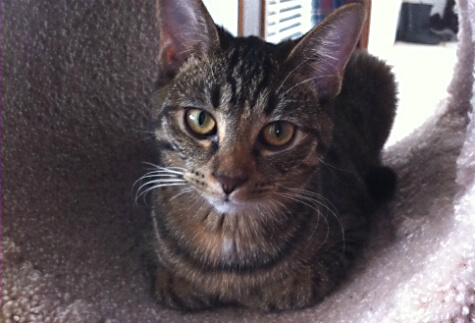 Linda Hoang is a Canadian blogger based in Edmonton, Alberta, who writes about travel, food, lifestyle and pet topics. She's also a seasoned social media/digital strategist with a journalism background, the founder of the Edmonton International Cat Festival and co-founder of Stop Race Based Hate, an online anti-racism education tool. Linda loves exploring the world with her partner Mike, eating their way through cities, supporting local businesses, and photographing Instagrammable Walls. Linda is a fur-mom to two cats and two dogs.
PrevPreviousClicks of the Day: Thursday, December 1, 2011 Edition!
NextClicks of the Day: Monday, December 5, 2011 Edition!Next