“Economic chaos: Massive unemployment, no credit, depleted savings, long lines at ATMs.” And I wonder how it will impact Canada.

Wowww. It is absolutely like Superman’s Fortress of Solitude!!!

Lol cool but I went to see the movie without any social media influence!

Well done, Captain America! (Remember to read my review of the movie!)

QR codes are changing the world! And these ones are pretty neat :) Reminds me of photos I had linked in a previous Clicks of the Day about creative bar codes! And speaking of QR codes…

“When teachers receive professional development on how to use mobile phones to enhance their regular lessons and combine that with, “changes in content, new forms of assessment, and linking people together,” we’ll start to see more adoption.” Let’s do it up, teachers!!

Squeal! How exciting. Castle is amazing, if you haven’t watched it you really should!

Lol, will the Winklevoss’ finally give it up now?

It’s all about positivity! ^_^

These are pretty sweet shirts!

Good reasons! Good thing I only shower ever other day :D (Too much information?)

So fantastic… I believe in Nessie! I definitely believe in her Alaskan counterpart! (And I know a lot of people believe in Ogopogo!) I wish they would be confirmed :( lol.

Will it happen again?? I wouldn’t doubt it given the amount of toxic gases in our atmosphere today…

Sleep, the Internet, and showers. I can see how the showers part would make sense, if I haven’t cleaned myself in more than three days I get very irritated! (It’s mostly in the feeling of greasy, dirty hair). But sleep and the Internet are definitely important to me, lol.

Would this deal enable Canadians to use Hulu? Because currently we sure can’t.

Pretty impressive. But Facebook and Twitter grew their audiences from scratch – whereas Google had a huge following prior to their Google+ launch! #Perspective

What a strange social media initiative.

It is sad but I was not surprised when I saw Twitter explode over news of her death. ALSO: I cut some viz of fans setting up a memorial outside of her London home. Fans had left flowers, photos of her, teddy bears and… SMIRNOFF VODKA. Wtf?

So great!! The video/images of two senior grandmother-like women getting married is SO cute!

How someone could do that – kill THAT many people let alone one – is beyond me. Terrible.

As he should be.

Devastating. (Though I must say I really love the slide over code or whatever program Global uses to show before and after shots!)

“Family accepts elderly couple is dead.” Such a sad story. I remember when they were first reported missing last year…

This is very impressive. And catchy. And brings back memories of the 90s, lol. So all around great time. 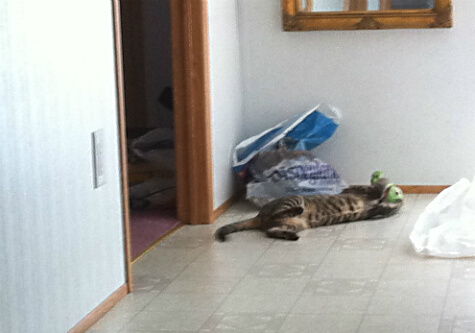 Woke up and saw Thor at the end of the hallway playing with Pascal! LOL

Linda Hoang is a Canadian blogger based in Edmonton, Alberta, who writes about travel, food, lifestyle and pet topics. She's also a seasoned social media/digital strategist with a journalism background, the founder of the Edmonton International Cat Festival and co-founder of Stop Race Based Hate, an online anti-racism education tool. Linda loves exploring the world with her partner Mike, eating their way through cities, supporting local businesses, and photographing Instagrammable Walls. Linda is a fur-mom to two cats and two dogs.
PrevPrevious(Spoiler-Free) Review: Captain America: The First Avenger
NextReview: Cora Breakfast and LunchNext