Gotta love our government. And speaking of wasteful government spending:

“The Harper government has hired a consultant to inject a little war into this year’s Canada Day bash on Parliament Hill. A Toronto theatre expert has been asked to find ways to insert a War of 1812 commemoration into the July 1st festivities that typically include pop music, dance and pyrotechnics.”

I feel like there’s enough people currently working within the government, who would be able to “find ways” to insert a War of 1812 commemoration into July 1st festivities…

Very cool! I want to see this exhibit!!

I always think I use so much data but I never even get close to my monthly limit!!

“No matter how big you think the mobile world or the Internet have gotten, neither has quite beaten the television set’s popularity, at least not in the U.S.”

That surprises me actually.

“The exploiters are hoping people hate the network’s new Timeline feature and attempt to lure users into believing they can revert back to the previously designed Facebook. The fraudsters bait with fake instructions on how to “go back to the ‘old’ Facebook,” playing on their emotions if they are adverse to the change.”

Lol. People need to get smarter.

“There is a glitch in the matrix at the University of Nevada at Reno, where two students from the 1910s have joined Facebook… The two profiles are actually the creation of Donnelyn Curtis, director of the university’s research collections… the unique project is meant “to help history come alive a little bit for students” and expose the university’s special collections to a wider audience.”

“3-D television was heralded as the breakthrough technology of the 2010 Consumer Electronics Show… One year later, at CES 2011, 3-D was back again — this time iterating. We saw bigger 3D HDTVs, 3-D displays that didn’t require special glasses, and camcorders that captured 3-D content. But where is 3-D now? It’s certainly not showing up big on our CES 2012 radar, and now looks like over-hyped technology in hindsight.”

I could have told you 3D TV was going to be a huge flop. Actually I’m pretty sure I have said that many times!!

“They sound like monsters out of science fiction: super-soldier ants that grow to double or triple normal size, with huge oblong heads and giant vicious mandibles they use to defend their colonies from attack. They are biological anomalies known to occur in a handful of ant species in nature as a result of environmental stresses, but now a McGill researcher has induced the growth of supersoldiers in his lab and shown this Incredible Hulk-like potential exists in all species – including humans.”

Of course scientists would induce the growth upon the ants. Of course. Scientists and their ‘playing God’ is going to be the end of us all. Also:

“U.S. researchers said Thursday they have created the world’s first genetically modified monkeys by merging cells from up to six different embryos, in what could be a big advance for medical research.”

STOP IT!!!!!!!!!!! ughhhh. This is just bad. We shouldn’t be trying to create lifeforms. This very much upsets me.

“Doctors are being urged to avoid using “undesirable terms” such as “fatness” or “obesity” when broaching a discussion about excess body fat with their patients. ‘Use of such terms may offend or distress some patients and prevent them from continuing to discuss their weight,’ say researchers who surveyed 390 obese patients in the Philadelphia area and asked them to rate words they found the most, and the least offensive for describing their excess size.”

Oh whatever! If it’s true it’s true, it needs to be said. You’re not going to lose weight if people use euphemisms.

“While still in the experimental stage, a new kind of battery can run off of discarded paper, producing electricity with only a little water as a by-product. Forget recycling, soon you’ll power your home with yesterday’s news.”

“London has unveiled what might be the world’s most exclusive hotel. Modeled after a river boat and perched on a roof high above the Thames, it’s a one-unit hotel that sleeps just two guests a night and will only stay open for a year. That means fewer than 800 people will ever stay there. Geez. Kinda’ makes the Ritz seem like a Motel 6.”

Interesting concept, though I’m not terribly sad about never being able to stay there, lol.

“Born out of the belief that all animals can be recycled into wearable items of high fashion, British artist Jess Eaton’s Roadkill Couture collection transforms skins, feathers and skulls into incredible fashion garments made from roadkill.”

Well. It does look nice. But the thought irks me.

“An Australian woman says it’s “a miracle” she’s alive after her bungee cord snapped and she was sent hurtling 111 metres into a crocodile-infested river in Africa.”

“Hip-hop parents Beyoncé and Jay-Z were in lullaby land with their baby girl Blue Ivy Carter Sunday, but one new dad was fuming over the velvet rope in the maternity ward that kept him away from his twins… Coulon griped that he’s been repeatedly barred from the sixth-floor neonatal intensive care unit, once for 20 minutes, by the superstar couple’s private security.”

“‘Community’ has not been canceled,’ said NBC Entertainment chief Bob Greenblatt at the Television Critics Association 2012 winter press tour. ‘It will definitely be back in the spring,'”

I hope it doesn’t get cancelled :(

“Take a look at what director Rick Meriki did last summer: a spectacular one-minute video he made with two of his pals as they traveled to 11 countries over 44 days, walking us through a dazzling variety of cultures, locations and images.”

This is fantastic… So much conveyed in just a minute. Perfect for video A.D.D-type people like myself. Really makes me want to … “move” ! I’m pretty sure I saw it last year, but always good to see again. Plus this time it comes with an “EAT” video and a “LEARN” video. Both equally as awesome. But oh man the “Eat” video makes me sooo hungry!!!!! All are must watch!

“This guy went to stay with his sister for a little while, and it turns out his sisters cat, Sashimi has a bit of an anger problem.” 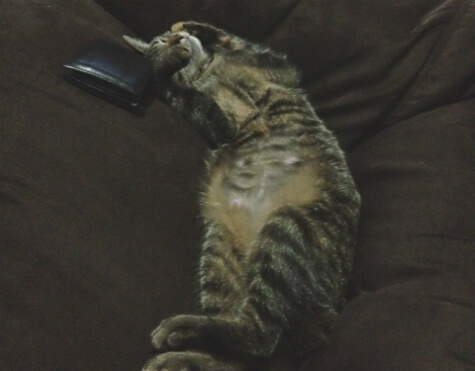 Linda Hoang is a Canadian blogger based in Edmonton, Alberta, who writes about travel, food, lifestyle and pet topics. She's also a seasoned social media/digital strategist with a journalism background, the founder of the Edmonton International Cat Festival and co-founder of Stop Race Based Hate, an online anti-racism education tool. Linda loves exploring the world with her partner Mike, eating their way through cities, supporting local businesses, and photographing Instagrammable Walls. Linda is a fur-mom to two cats and two dogs.
PrevPreviousReview: Sumo Sumo
NextClicks of the Day: Monday, January 9, 2012 Edition!Next