“A “gag order” written into the government’s proposed Internet snooping bill makes it an offence for telecommunication companies to tell customers whether their personal information has been handed over to investigators, police or government, according to one privacy lawyer.”

Wow. This bill just gets better and better each day doesn’t it?

“Hacker group Anonymous has posted a video demanding the resignation of Toews and calling for the controversial online surveillance bill C-30 to be scrapped. The video’s message targets Toews for reintroducing bill C-30 despite backlash from internet users and privacy advocates. “We know all about you Mr. Toews, and during Operation White North we will release what we have unless you scrap this bill. We told you to expect us.””

You do not want to be on Anonymous’ target list.

“For the second time in just three days, a family pet turned on a young child in our province. But unlike the tragic incident in Airdrie on Wednesday, in which a newborn died after being attacked by the family’s Husky, the most recent victim, a Fort Saskatchewan toddler, escaped with just stitches.”

This is so sad. And the worst part is that when I hear these kinds of stories I always worry about the animals involved :( Because they’re sure to be put down and that’s just very sad. There could be so many factors as to why the dogs did it… I’m sure they didn’t mean to. :(

“The Alberta minister responsible for consumer protection wants the federal government to enact national standards that force cellphone companies to be more forthright about the costs of downloading a movie in Arizona or texting from Texas, so Canadians can avoid “bill shock.” Service Alberta Minister Manmeet Bhullar said if the federal government doesn’t take action to protect consumers, the province will.”

“Russian scientists are planning to use robotic probes to reach water layers at the bottom of an ancient sub-glacial lake in Antarctica in 2013-2014… ‘There is no other place on Earth that has been in isolation for more than 20 million years. It’s a meeting with the unknown.'”

So interesting. I wonder what creatures lie in that lake?!?!

“The desire to collect information on customers is not new for Target or any other large retailer, of course. For decades, Target has collected vast amounts of data on every person who regularly walks into one of its stores. Whenever possible, Target assigns each shopper a unique code — known internally as the Guest ID number — that keeps tabs on everything they buy. Also linked to your Guest ID is demographic information like your age, whether you are married and have kids, which part of town you live in, how long it takes you to drive to the store, your estimated salary, whether you’ve moved recently, what credit cards you carry in your wallet and what Web sites you visit. Target can buy data about your ethnicity, job history, the magazines you read, if you’ve ever declared bankruptcy or got divorced, the year you bought (or lost) your house, where you went to college, what kinds of topics you talk about online, whether you prefer certain brands of coffee, paper towels, cereal or applesauce, your political leanings, reading habits, charitable giving and the number of cars you own.”

“ESPN battled Sunday to contain the furor over its tasteless “chink in the armor” Jeremy Lin headline, firing the overnight headline writer and suspending an anchor who said the phrase on air. “We will be better in the future,” the sports network promised in a statement.”

The anchor should have gotten the same treatment as the writer. Terrible, ESPN.

“The Boston Business Journal stopped using Pinterest one day after setting up its account after realizing it could be sued for images it uploaded to the site… he had pulled the content after taking a careful read of Pinterest’s user agreement and finding out the company reserves the right to sell images users upload.”

This is very interesting.

“The site lists journalists by region, beat or by publication, making it incredibly easy to find the journalist who can cover your story. Not only can you find out which journalists work at major publications and sites, you can connect with them through Twitter. You can also find out what they’re personally interested in, as Press Pass highlights the stories that they’re sharing through their Twitter feed. The site analyzes each journalist’s tweets, creating a profile based on that content – including what they’re reading, topics they’re interested in and who they’re talking to. Each journalist is ranked based on the number of followers they have and their number of tweets.”

“Now, like many of you, I am struggling hard to teach this old dog new tricks. Struggling to accept that much of what we know is no longer valid. And trying to come to grips with the fact that crappy newspaper executives are a bigger threat to journalism’s future than any changes wrought by the Internet. Today news organizations that do not embrace how news is now created and consumed – Digital First and Print Last – are ignoring not only how their customers desire to get news but how they understand it as well. We ignore this at the risk of killing our business but worse we ignore it when the solution to our future is sitting under our noses – the power of our brands – if we would only let go of the past and embrace the future.”

“If an employee writes anything vaguely negative about their employer, including saying something as anodyne as ‘I had a bad day at work’, bosses are well within their legal rights, to sack the staff member. Equally, it still remains a grey area as to what type of comment on social media constitutes “bringing a company into disrepute”. Somebody writing “I had a bad day at work”, and that person’s job being publicly available via a search on LinkedIn, could get somebody in trouble with their company, resulting in them losing their job, according to Whelan – as it could make the firm concerned look like a bad place to work.”

That warning keeps coming back … careful what you tweet everyone!

“Increasing numbers of studies of social networks point to much smaller numbers of real and active users — sharply reducing the value of the platforms, and social media marketing… In some anecdotal cases, the number of users, active and actual, could be as small as one-third. And nearly one-half of user accounts could be fake or contain no user profiles. No user profiles means very little usable data for marketing or advertising campaigns. This is a huge hole in social media platforms.”

Makes me wonder just how many of my 3,000 followers are real! lol.

“Over the past few years, many people have asked whether sex offenders should be able to use social-media sites like Facebook and MySpace. This week, a federal judge decided to throw out a Louisiana state law that prohibited sex offenders from joining or even looking at Facebook and other social-networking sites. U.S. District Judge Brian Jackson, based in Baton Rouge, said the law was unreasonable and unconstitutional.”

“There are now 4.8 million interracial marriages in the United States—about 1 in 12 marriages. That number has doubled in the past 30 years, and has risen especially sharply among black populations… but that doesn’t mean racial stereotypes and biases have ceased to exist, even among those who choose to marry outside their race. There are still well-documented prejudices about the oft-fetishized docility of Asian women, the marriageability (or lack thereof) of black women, and the virility (or lack thereof) of both black and Asian men.”

“Birds are more inclined to seek out new partners when climate conditions become unpredictable or variable. The likely reason? The researchers found that birds, regardless of whether they’re male or female, seek out diverse genes for their young when they’re uncertain of what the future may bring. Cheating improves a bird’s chances of combining their genes with other genes best suited for whatever environment their chicks may be born into. The flighty findings could provide us with more insight into what makes human beings stray.”

Fascinating! Although this doesn’t make me condone cheating in any way. I hate cheaters and I hate stories of cheaters. I can’t stand movies with cheating plot lines, lol.

“The man, who was too weak to utter more than a few words, said he had been inside since 19 December. He may have survived by drinking melted snow. The 45-year-old was discovered by snowmobilers who initially assumed the car was a wreck until they dug their way to a window and saw movement inside, reported the Vasterbotten Courier newspaper. The man was huddled in a sleeping bag on the back seat.”

“An album of photographs from his underwater dogs series that were posted to Facebook have garnered nearly 30,000 “likes” and have been shared almost 22,000 times. His website, which is typically handles around 200 visitors a day, is now overloaded with more than 100,000 daily visitors.”

“The show about the dysfunctional five’s daily musings celebrates a major milestone on Sunday with its 500th episode… To commemorate the show, Global News compiled a numbers list that chronicles the Simpsons’ lengthy history” including “$486.52 – price Maggie costs when she’s scanned at the grocery store in the show’s opening credits” and “104 – Mr. Burns’ age.”

I love The Simpsons! I’m happy for their milestone. Can’t wait to get the entire series on box set when it all wraps up, hehe. Of course the earlier years made for better episodes but I won’t ever stop watching Simpsons even if it isn’t that funny anymore, haha!! :)

“Batman hits the mean streets of Toronto, I mean Gotham, to scream at people, I mean protect people.”

“I know you’re busy, but this head ain’t gonna pet itself, sweet heart.”

LOL. Oh my gosh, sooooo funny and so cute. Hahaha!! 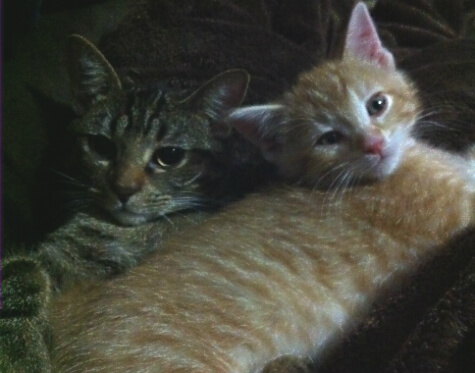 Linda Hoang is a Canadian blogger based in Edmonton, Alberta, who writes about travel, food, lifestyle and pet topics. She's also a seasoned social media/digital strategist with a journalism background, the founder of the Edmonton International Cat Festival and co-founder of Stop Race Based Hate, an online anti-racism education tool. Linda loves exploring the world with her partner Mike, eating their way through cities, supporting local businesses, and photographing Instagrammable Walls. Linda is a fur-mom to two cats and two dogs.
PrevPreviousReview: Barb & Ernie’s
NextClicks of the Day: Tuesday, Feb. 21, 2012 Edition!Next