“An Alberta senior has gone public with allegations of misery, physical abuse and substandard living conditions at a long-term care centre. Beverley Munro says staff in her ward at the Edmonton General Hospital physically manhandle her to get her to bed, and three months ago ripped her earlobe when her dressing gown got caught in her earring.”

“Edmonton has recorded its first homicide of 2012 with the death of a 22 year old man Sunday morning. An autopsy on Tuesday confirmed the death of Welid Sahle Meskel, 22, was a homicide, but a cause of death has not been released.”

It was a quiet two months at least.

“A 27 year old man has died after being hit by a train near Banff, and it appears it’s another case of headphones causing the man to not hear the train coming.”

This is bizarre. How loud are your headphones that you can’t hear the train coming? Or notice the ground rumbling? And the fact that there was one last week in Leduc and then one in Ontario…

“There will be no professional baseball played at Telus Field this summer after the Edmonton Capitals announced Tuesday the team is withdrawing from the North American League for the 2012 season. Patrick LaForge, president of the Capitals, said team owner Rexall Sports and Entertainment (RSE) is pulling out because only four teams are registered for the 2012 season.”

Very sad news, the Edmonton Capitals were doing great! And their branding/marketing was fantastic – all of the different theme nights and stuff. Perfect summer outing. And quoting @baconhound on Twitter: “I loved how you didn’t need a second mortgage to get a hot dog and a beer.”

“Two Canadian climate change scientists from the University of Victoria say the public reaction to their recently published commentary has missed their key message: that all forms of fossil fuels, including the oilsands and coal, must be regulated for the world to avoid dangerous global warming.”

We’ve got to change our actions before it’s too late. Although I feel like it may already be… (pessimistic of me?)

“Chris Brown and Rihanna are back together – musically speaking. Two songs featuring the singers hit the Internet on Monday. Brown sings on the remix of Rihanna’s explicit song ‘Birthday Cake,’ and she’s featured on the remix of his tune ‘Turn Up the Music.'”

This is very stupid. You do not work with the person who beat you. Such role models…

“A study in the journal mBio, published by the American Society for Microbiology, shows how an antibiotic-susceptible staph germ passed from humans into pigs, where it became resistant to the antibiotics tetracycline and methicillin. And then the antibiotic-resistant staph learned to jump back into humans. ‘It’s like watching the birth of a superbug.'”

“Teenagers’ drinking habits and the group’s escalating binge-drinking statistics are linked to exposure to alcohol in Hollywood movies, a large U.S. study, unprecedented in its scope, suggests. Watching scenes of celebrities drinking or buying alcohol was more effective in influencing teens’ alcohol consumption than having alcohol in the home or parents who regularly drink, the report released Tuesday says.”

Ah, young people are so impressionable.

“University of Texas researchers have found a new way to quickly repair damaged nerves in rats that might one day help people who suffer disabling injuries. The same technique might also work on people who otherwise would be paralyzed by a spinal cord injury, but that would be more challenging to fix.”

Cool – but sad because we humans were likely the ones who paralyzed those rats in the first place, all in the name of research and science for the betterment of mankind… sigh.

“Depending on circumstances, we could be headed for either an amazing future where we’re printing food or a disaster where people are barely scraping by growing a few vegetables on their roofs. Here are four different scenarios about how we will be eating in a decade.”

“The social, legal, and ethical problems posed by the coming robotics revolution.”

Soooo interesting! Questions we will definitely have to face soon. #iRobot

“Astronomers have confirmed the existence of a new class of planet: a waterworld with a thick, steamy atmosphere. The exoplanet GJ 1214b is a so-called “Super Earth” – bigger than our planet, but smaller than gas giants such as Jupiter. Observations using the Hubble telescope now seem to confirm that a large fraction of its mass is water. ‘GJ 1214b is like no planet we know of.'”

The universe is awesome.

“West Edmonton Mall and Google have teamed up to develop an indoor mobile map to help visitors find their way around North America’s largest shopping centre. Starting Tuesday, a Google Maps user zooming in on the mall on their Android device will see a detailed floor plan and be able to pinpoint their location inside the 5.3-million-square-foot mall.”

Lots of these types of questions coming up with Pinterest.

“Canada’s largest newspaper and newspaper of record — The Globe and Mail — has published details of Apple’s upcoming iTV. The Canadian paper, citing two anonymous sources, then confirms the feature set of iTV: Voice control via Siri integration; gesture recognition with a front-facing camera; and an on-screen keyboard, allowing users to surf the web, use social networks, start video chats, and so on. The Globe doesn’t confirm that the iTV will be interoperable with the iPhone or iPad, but in our opinion that’s a given.”

As if hardcore Apple fanatics don’t have enough stuff to spend their money on, lol.

“All I Really Want is an item aggregator — like a simplified Pinterest — where you can list anything from shoes, school supplies, your favorite charities, vacation packages and practically anything else.”

I signed up! :) Look forward to populating the list.

“Not that you’d know it if you’ve been waiting for an update, but I have been consuming as much Edmonton new media as usual lately. I just haven’t sat myself down to write about it. Which is a problem, because then it piles up, and the thought of catching up becomes daunting. So here I am, catching up.”

Love Karen’s new media roundups! My Feature Story on the Awesome Foundation gets a mention, woot woot! Thanks Karen!

It was bound to be created, lol. Pretty funny. A little too hockey-centric but I suppose Edmonton is big on hockey, lol.

“Nothing says endless love quite like a Decepticon on your ringfinger for all eternity. And we don’t just say that because Megatron is a warrior poet who can transform into a handgun. No, the severed icon of the Decepticons looks stunning as an engagement ring.”

Lol. It’s silly but it actually looks kind of cool.

Interspecies adorbs of the day. <3 And some more... 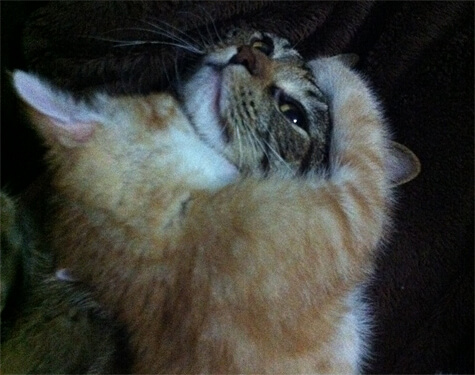 Linda Hoang is a Canadian blogger based in Edmonton, Alberta, who writes about travel, food lifestyle and pet topics. She's also a seasoned social media/digital strategist with a journalism background. Linda loves exploring the world with her husband Mike, eating their way through cities, supporting local businesses, and photographing Instagrammable Walls. She is the founder of the Edmonton International Cat Festival and a fur-mom to two cats and two dogs.
PrevPreviousClicks of the Day: Feb. 17, 18, 19 2012 Weekend Edition!
NextReview: Thai FlavoursNext