Welcome to Thursday, December 1 2011’s Clicks of the Day!

“Statistics Canada says the vast majority of Canadians feel they are safe from crime.”

For the most part I suppose.

“As the number of features grows, though, so does a corresponding problem: Most of Facebook’s 750 million users don’t know these features exist.”

“The social networking site has increased its limit in status updates to more than 60,000 characters — 63,206 characters to be exact.”

Yikes. That’s a lot of characters.

“Entanglement is a process in quantum mechanics by which two objects act like a single object even though they’re not physically connected… Now Ben Sussman of the National Research Council has entangled objects far bigger than molecules — pieces of diamond about half a millimetre thick. It’s a step toward extremely fast quantum computing.”

Cool… but what happens when we can’t go any faster? *planet implodes*

“Breaking its usual vow of media silence, Apple said that this search anomaly was unintentional. ‘Our customers want to use Siri to find out all types of information, and while it can find a lot, it doesn’t always find what you want,’ Apple representative Natalie Kerris told the NY Times Wednesday evening. ‘These are not intentional omissions meant to offend anyone. It simply means that as we bring Siri from beta to a final product, we find places where we can do better, and we will in the coming weeks.'”

“Yttrium and indium, two of the rare-earth elements that enable us to have TVs, computer monitors, and touch screens — oh, and solar panels — are on a fast track to complete depletion. At our current rate of use, we have less than 15 years’ worth left. Of course, we’ll probably become a little more efficient at deploying these resources … but at our modern levels of demand for technology, efficiency really only postpones the inevitable.”

Yikes, that’s scary. Not surprised though. Humans tend to destroy the places they inhabit. lol.

Disgusting. And now for disgusting of a different sort:

“Horses could soon be butchered in the U.S. for human consumption after Congress quietly lifted a 5-year-old ban on funding horse meat inspections, and activists say slaughterhouses could be up and running in as little as a month.”

Could be worse I suppose.

“Amidst the chaos of the Vancouver riot one photo emerged as the definitive shot.”

Great shot, glad it got the title!

“Typically, the tradeoff for being subjected to ads is that consumers get some sort of free or subsidized service. Could this business model also work for ATM transactions, thereby eliminating annoying $3 fees for consumers?”

I am all for that!

“Stephen Harper is just days away from surpassing another of his 21 predecessors — this time John Diefenbaker — to become the ninth longest-serving prime minister in the country’s history.”

“Police are on the hunt for a suspect after an armoured vehicle was robbed while parked outside the Century Casino in northeast Edmonton Thursday afternoon.”

“Yoga pants are fine, the board says, as long as long shirts or sweaters cover up the revealing bottoms.”

Hilarious. People also shouldn’t wear tights as pants if the top is a shirt.

“Details from emails published by the Toronto Star indicate the pickup was orchestrated specifically to extract the minister from his fishing trip, “under the guise” of a training exercise.”

Ah, abuse of power and resources by people in high-up positions. Gotta love it.

“In the 30 years since the scourge emerged, more than 30 million people have died and twice as many have been infected with HIV… There’s reason to hope that the deadly pandemic can be halted, Marlink said, because the last decade has seen an explosion of new scientific and medical information with which to battle the virus.”

“A new Canadian survey has found 40% of men believe there’s a stereotype that wine is more of a woman’s drink, but also found 76% like drinking it.”

I dislike wine. I don’t know why people love it so much.

“An explorer has found the biggest insect ever on record – so large it can scoff a carrot.”

Lol. Catchy. Good lyrics. Are you tired of the Occupy movement yet? How will this movement go down in history? Will any change come of it? All questions, no answers that I have. Time will tell. I believe change does need to happen but what exactly and which , how quickly, I’m not sure.

You can’t go wrong with a video of a cat massaging a dog!! :) Heehee. 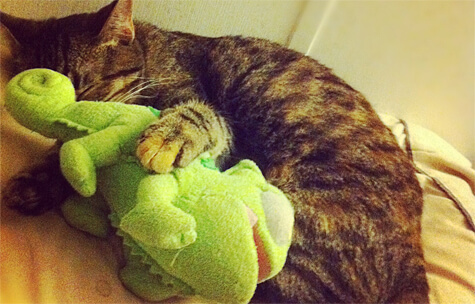 Thor and her bestie.

Linda Hoang is a Canadian blogger based in Edmonton, Alberta, who writes about travel, food, lifestyle and pet topics. She's also a seasoned social media/digital strategist with a journalism background, the founder of the Edmonton International Cat Festival and co-founder of Stop Race Based Hate, an online anti-racism education tool. Linda loves exploring the world with her partner Mike, eating their way through cities, supporting local businesses, and photographing Instagrammable Walls. Linda is a fur-mom to two cats and two dogs.
PrevPreviousClicks of the Day: Wednesday, November 30, 2011 Edition!
NextClicks of the Day: Dec. 2, 3, 4 2011 Weekend Edition!Next