Which do you believe? A touchscreen on the front and back side is a little weird…. lol – and the future of charging your iPhone is a little odd too.

Really… really awesome perks. For example – though not like this could ever be implemented in Edmonton but – “If it snows 2 feet or more, the office is closed for employees to go snowboarding” LOL

Tons of subscribers aside – how many are actually buying deals? I have bought two Groupons since it began and it’s been months since the last purchase!

Oh, the web. I can’t believe it’s only been 20 years. There has been so many advancements and the impact – the massive impact the web has had on our entire world – crazy. I couldn’t live without it and I bet you couldn’t either!

Lol, which would you choose?

What an idiotic investment.

Ah, I read this on Saturday – also known as Caturday – so it was a very happy Caturday! :)

Hard to imagine more people are smoking even though you never even see cigarettes in stores anymore (at least here in Edmonton) and I feel the dangers of smoking have been pounded into everyone’s heads so much for as long as I can remember.

Crazy differences from class to country…

Lol. Mike says men are now no longer needed in this world.

This feels like old news now since it broke on Friday but my first response was “going from AAA to AA+ really doesn’t seem that bad.” If everyone got AA+ ratings in school, everyone would be extremely happy, would they now? Lol but I suppose this is a different rating scale. Anyway, we can lead into this more detailed, related click now:

Why do people riot…

So sad. Not to sound like the weird girl from Mean Girls, who said she just wishes everyone could be like rainbow and butterflies (or however that phrase goes) – but I wish everyone could just be happy and not try and kill one another.

Always in awe of the world and its creatures.

Back to school items are such a waste of money! I can’t believe how much my mom used to spend on me when we went back to school shopping. Then as I got older I started buying less and less! As it should be.

Lol the bare feet one is really weird – who walks around at work in bare feet? But yes, these 12 are pretty annoying habits.

Weird! “An extremely rare condition known as “adermatoglyphia” dubbed the ‘immigration delay disease’ because sufferers have such a hard time entering foreign countries. In addition to smooth fingertips, they also produce less hand sweat than the average person.”

*pats my iPhone* Except Mike has a smartphone so this does slightly appear to affect me. DANG HACKERS.

So crazy. Would you offer that much for your missing pet?!

I still believe 9/11 was planned – the evidence is freaking ridiculous! I don’t care what people say! I also believe in the Japan tsunami conspiracy. I also believe in Aliens. I believe in many things… and apparently so do some Americans, lol. #NOTALONE Is it paranoia or are we just more open-minded and intelligent? HM? lol. 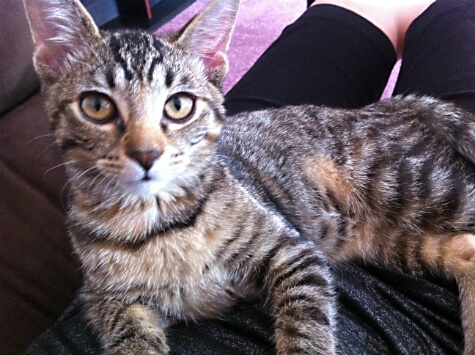 Thor is so pretty and so intelligent-looking (because she is quite intelligent!)

Linda Hoang is a Canadian blogger based in Edmonton, Alberta, who writes about travel, food lifestyle and pet topics. She's also a seasoned social media/digital strategist with a journalism background. Linda loves exploring the world with her husband Mike, eating their way through cities, supporting local businesses, and photographing Instagrammable Walls. She is the founder of the Edmonton International Cat Festival and a fur-mom to two cats and two dogs.
PrevPreviousClicks of the Day: Thursday, August 4, 2011 Edition!
NextClicks of the Day: August 12, 13, 14 2011 Weekend Edition!Next