What do you think? Are PCs dead? I don’t have one… but an iMac serves the same function as a PC. But I also have a Macbook Pro, iPad, and iPhone – which can all essentially do the same thing, lol. It’s always nice to have a stable non-portable system you can depend on though, even if you don’t use it as much, I think!

Sad day (and subsequent days) since/after the wall was built. Glad it was torn down during the year I was born though – good luck? :D

Happy International Left Handers Day to all lefties out there! I myself am a rightie.

Or people are getting dumber. “Consumers are still falling for scams where they are promised rewards to help someone transfer money.” WHY ARE PEOPLE STILL FALLING FOR THIS? Come on people.

I believe that money does contribute GREATLY to happiness. I REALLY DO. Because if I had enough money to pay off bills, to go out for dinner, to go to festivals or other special events, to purchase the video camera that I really want in order to pursue a videography/editing career on the side, ETCTERA, then my mood and therefore happiness would increase, would it not?

I’m SURE I have this syndrome. Some good tips in this infographic to help offset it…

So cool! And God-like. lol

This was such a cool social media experiment!

Such a great idea. All companies should implement, lol.

I am not sure if I like how wide the screen is! But whatever, woot woot iPhone5!

I still haven’t been using Google+ all that much, will this help?! Probably not since I don’t play any of the games on Facebook either, lol.

A sign of the times. Pretty sweet addition I’d say!

I wonder what will happen on November 5!

Bullying = Bad. But I am not surprised over this.

Would you go that far to master another language?! LOL, weird.

Lol, not going to happen.

Kind of puts Edmonton’s alarming homicide numbers in perspective though.

“As he handed her the ring, A. said “I can’t believe it” and jumped in excitement, hitting M. with her elbow – knocking the ring out of his hand. The ring, in turn, flew in the air, right over the edge of the cliff.” lol aw, so sad!

Very cool shot with Earth in the background…

Devastating… disgusting – people need to not do this to animals and dogs are NOT SOMETHING TO BE EATEN!

I used to be suuuuuch a creative child :) I hope/think I am still creative but it’s hard to bust out creativity if someone just asks you to be creative, ya know?

Very cool! Apparently his girlfriend is from the Edmonton area? I just thought he was really into theatre/acting! lol

Checked out the Global Fringe EyeCam yet? So surprised sometimes at how many people there at at the Fringe!!! That place is packed!

Wow 7 weeks is EARLY! I am someone who would want to know the gender :) 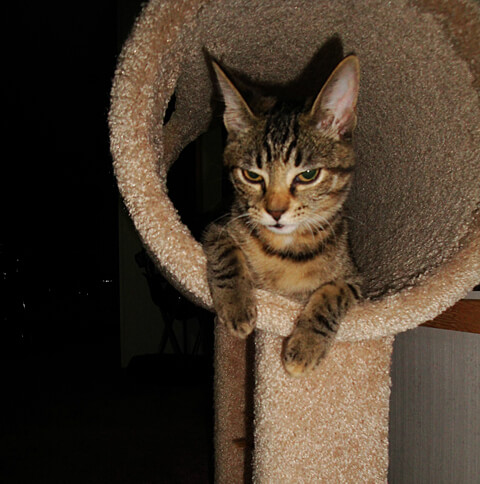 Linda Hoang is a Canadian blogger based in Edmonton, Alberta, who writes about travel, food, lifestyle and pet topics. She's also a seasoned social media/digital strategist with a journalism background, the founder of the Edmonton International Cat Festival and co-founder of Stop Race Based Hate, an online anti-racism education tool. Linda loves exploring the world with her partner Mike, eating their way through cities, supporting local businesses, and photographing Instagrammable Walls. Linda is a fur-mom to two cats and two dogs.
PrevPreviousClicks of the Day: August 5, 6, 7 2011 Weekend Edition!
NextClicks of the Day: Monday, August 15, 2011 Edition!Next