“Residents in Whitecourt – and in communities across the province – are cleaning up after extreme weather caused damage in a number of areas Saturday.”

Crazy the damage these winds caused.

“Kids and teenagers who have spent much of their lives in the hospital got a chance to get away at a special camp this weekend. Twenty five campers who have undergone brain or spinal surgeries at the Stollery Children’s Hospital took part in Camp Everest over the weekend, participating in camp activities and spending time with other kids who have gone through similar experiences.”

“The Munros were some of the thousands of people to visit William Hawrelak Park Saturday afternoon for the opening day of the 37th annual Heritage Festival. The festival drew a record 112,000 visitors on Saturday, and officials estimated a total of 344,000 people would attend over the weekend, based on last year’s numbers. With sunny skies and the temperature hitting 27 degrees, Edmontonians enjoyed beautiful weather, though thuderstorm warnings prompted organizers to shut the festival early on Saturday night. Festival-goers were also treated to the music, food and dancing of more than 80 cultures, represented at 62 different pavilions. ”

So jealous… I really think Heritage Festival should start on a Friday because some people work all August long weekend and can’t attend! :'(

“The city may seem like it’s teeming with roadside Taber corn merchants but Edmontonians should be wary of their purchase, say producers and distributors. Counterfeit corn has been a problem in the City of Champions for several years and it’s hurting legitimate Taber corn sellers, said David Jensen, a Taber corn producer and president of the Alberta Corn Growers Association. “We call it counterfeit Taber corn. They just get corn from somewhere else and call it Taber corn and that’s how it works,” explained Jensen. “And Edmonton is one of the worst places for it.””

“Thousands of people descended upon our biggest What the Truck?! yet to fill up on tasty food and the amazing view of Edmonton’s river valley… We’ve heard lots of feedback about Friday’s event already – thank you to everyone who has been in touch. We know that some of the lines were long, chaotic, and that some of the trucks ran out of food rather quickly. We always try to learn from our events, and we definitely have some ideas about how we can improve future events.”

Didn’t get to go to this because I got off work late and then had a thing to do that would run until 8 p.m. Plus it drawing massive crowds and hearing reports of trucks selling out and long line ups didn’t make me too eager to try and swing by… I’ve had pretty bad luck the last few food truck festivals I’ve tried to head to. Hoping their ideas on how to improve future events works! I do however plan on going to Eat. St. filming on Tuesday!! Woo hoo! The food truck scene here is getting so BIG.

“Wouldn’t it be great if there was a one-stop-shop for Edmonton blogs? Where you could see a list of all the blogs and maybe even see all of the latest posts too?”

Well now you CAN! Thanks for this Mack. :) And thanks for including my blog!!

“The FBI will investigate Sunday’s rampage at a Sikh temple in a Milwaukee suburb as a “domestic terrorist-type incident” that left at least six people and the gunman dead, the town’s police chief said. Another three people were wounded, including the first officer to respond to the scene, Oak Creek Police Chief John Edwards said. A second officer returned fire, killing the suspect, Edwards said.”

Sigh. What’s wrong with some people…

“Chinese government authorities have detained nearly 2,000 people as part of a nationwide crackdown on the sale of fake or counterfeit drugs and health care products, according to a report on Sunday from Xinhua, the official news agency. ”

That’s a lot of people involved…

Hooray!!! (But our medal count compared to other countries is kind of sad. Bring on the Winter Olympics! Lol).

“A weight-loss drug recently approved for use in the U.S. may be headed for Canada — a move that could mark a turning point in a controversial corner of medicine that last saw a new drug approved more than a decade ago. The makers of Belviq say they are poised to market their drug in Canada, a plan that, if approved, would double the country’s prescription diet pill market – from one drug to two.”

“No one has died from dehydration while exercising. On the other hand, 16 people have died from over-hydration while working out. Yet sports companies tell us you need to drink before you feel thirsty when you exercise. Don’t believe it, says Peter Gill, a University of Alberta medical student and a Rhodes Scholar completing his PhD in primary care at the University of Oxford in the U.K. Gill was part of a team of Oxford researchers with the Centre for Evidence Based Medicine, who looked into the evidence — 550 studies — behind some sports products that promise enhanced athletic performance or improved muscle recovery. What they found is that athletes and consumers spend millions of dollars annually on myths, products that don’t work, and that could actually do harm.”

“New food labelling rules that take effect this weekend are set to help millions of Canadians with food allergies as well as those with celiac disease. The food allergen labelling regulations put forth by Health Canada requires food makers to clearly identify the presence of ingredients that could cause allergic reactions.”

I never realized how hard grocery shopping could be for some people. Glad these new rules are in effect for them!

“Canada’s Food Guide has been setting serving size recommendations for decades and as it celebrates its 70th anniversary, a new study shows that we still are not clear on how much to eat.”

I know I eat way too much…

“As Facebook grows towards 1 billion monthly active users and beyond, maintaining and frequently improving the site is a must. The company’s hacker mentality of “move fast and break things” definitely applies here. “We’re making this change to keep our release process as quick and efficient at 1,000 engineers as it was at 100,” release engineering manager Chuck Rossi said in a statement.”

“Samsung Electronics is set to take the wraps off a sequel to its popular Galaxy Note smartphone at an event on August 29, about two weeks before the possible debut of Apple’s new iPhone.”

I’m still surprised not everyone has an iPhone, lol.

“Microsoft recently reported the first quarterly financial loss in its history. The reason was a big acquisition gone sour. Microsoft had to write off more than $6bn (£3.8bn) that it had spent to acquire Aquantive, an online advertising business. By contrast, Microsoft’s earliest acquisition, PowerPoint, has been a financial success. Microsoft bought PowerPoint 25 years ago, on 31 July 1987. The result may have been more valuable to Microsoft than any of the more than 100 acquisitions it has made since.”

“This is Now project is a visual composition which uses real-time updates from the ever popular Instagram application based on users geo-tag locations. The tool streams photos instantly as soon as they are uploaded on Instagram and captures a cities movement, in a fluid story.”

It depends for me. I love putting money to local restaurants but when it comes to buying food… I lean towards whichever store is going to give me a lower bill in the end. Finances are rough! :(

“The last time you purchased something made entirely from cardboard, chances are it was a box to pack up your belongings. While the sturdy material is perfect for moving your stuff, an inventor from Israel has figured out a way to make cardboard move you. Using nine dollars worth of materials, bicycle enthusiast Izhar Gafni has created a fully functioning, water-resistant bicycle, made, from seat to spokes, entirely of recycled cardboard. The technology makes the environmentalist’s choice mode of transportation even a bit greener and easier on the wallet.”

“After a journey of 354 million miles to the outskirts of Mars, the Curiosity rover and its spacecraft are speeding up and coming under the influence of the planet’s gravity as it prepares for a dramatic landing early Monday. NASA officials said early Sunday afternoon that the spacecraft was about 100,000 miles from Mars and remained in ideal shape. They also said its position in relation to the point selected to enter the atmosphere also is on target. The upcoming landing is one of the riskiest ever tried, with final descent that starts at 13,200 mph and ends after what NASA officials call “seven minutes of terror.””

Lol funny that there are landing parties for this!

“Western Canada’s remarkable dinosaur riches, a scientific wonder and tourism magnet for Alberta as well as parts of Saskatchewan and B.C., can be traced in large part to the birth of the Rocky Mountains and other geological forces that combined to create a multitude of isolated animal habitats in the region about 75 million years ago, according to a new U.S.-led study.”

“When Lauren Kornacki discovered her father crushed beneath his BMW 525i, which had slipped off the carjack as he was working on it, the 22-year-old wedged herself under the mid-sized vehicle — and pulled it off her father. We hear tales from time to time of people exhibiting superhuman strength in life-and-death emergencies. After experiencing amazement over such a feat, we all wonder: How can a regular person lift something that weighs more than a ton?”

“America’s latest golden boy in the pool candidly admitted to urinating in the Olympic pool while warming up for his impressive swimming feats.”

Lol. Good for him for admitting it. Come on, you can’t say you’ve never peed in a pool!

“Just as Great Britain stunned the world of athletics at the Olympic Stadium in London with three track and field golds, a full moon rising under Tower Bridge formed an image like a sixth Olympic ring. The image has gone viral on Twitter.”

It is a truly amazing photo!!!

“A news reporter is doing a story on a devastating flood from the safety of a life raft until someone comes by and shatters the dramatic illusion.” 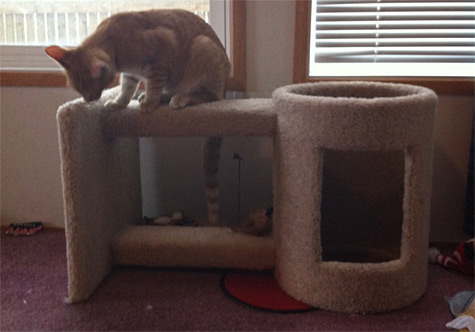 Linda Hoang is a Canadian blogger based in Edmonton, Alberta, who writes about travel, food, lifestyle and pet topics. She's also a seasoned social media/digital strategist with a journalism background, the founder of the Edmonton International Cat Festival and co-founder of Stop Race Based Hate, an online anti-racism education tool. Linda loves exploring the world with her partner Mike, eating their way through cities, supporting local businesses, and photographing Instagrammable Walls. Linda is a fur-mom to two cats and two dogs.
PrevPreviousClicks of the Day: Thursday, August 2, 2012 Edition!
NextClicks of the Day: Monday, August 6, 2012 Edition!Next