“Pairs of men and pairs of women, many wearing purple, marched to the legislature Thursday from the Garneau neighbourhood where a gay University of Alberta student was assaulted two weeks ago. About 200 people attended the no-hate rally that started with the march at 6 p.m. on 84th Avenue and 110th Street, the spot where 26-year-old Chevi Rabbit was attacked on July 19. Drivers on 109th Street honked vehicles in support as the line of people streamed past, some carrying signs that read: From hate 2 hope. Applause broke out from a small group waiting at the legislature as the marchers, led by Rabbit, arrived for the rally.”

“Health Minister Fred Horne announced Thursday the resignation of Alberta Health Services board member Sheila Weatherill, who approved the controversial expenses of AHS’s top financial executive when they both worked under Edmonton’s former health region. Weatherill’s resignation came one day after Allaudin Merali stepped down as chief financial officer of Alberta’s superboard over $346,208 in expense claims he made when he was Capital Health’s CFO between 2005 and 2008. Weatherill was CEO of Capital Health — and Merali’s boss — when the province consolidated health boards in 2008. That year, Weatherill received $1.5 million in severance pay and Merali was given $1 million. Both also received hefty retirement packages employees are no longer eligible for.”

“The Humane Society has more kittens to find homes for after six were found abandoned in a suitcase earlier this week.”

I wish people didn’t abandon animals like this :'( SIDE NOTE: The kitties are SOOO CUTE!!

“Nearly 220 counties in a dozen drought-stricken states were added Wednesday to the U.S. government’s list of natural disaster areas as the nation’s agriculture chief unveiled new help for frustrated, cash-strapped farmers and ranchers grappling with extreme dryness and heat. The U.S. Department of Agriculture’s addition of the 218 counties means that more than half of all U.S. counties – 1,584 in 32 states – have been designated primary disaster areas this growing season, the vast majority of them mired in a drought that’s considered the worst in decades.”

“Kofi Annan says he has received no support from world powers to take decisive action over the escalating violence in Syria, and has decided to resign as the United Nations special envoy to Syria as of Aug. 31.”

“Research presented Thursday at the American Psychological Association’s 120th Annual Convention, this year in Orlando, Fla. claims that even modest weight loss of 20 pounds can provide a decade of health benefits to overweight and obese persons.”

“You know those Facebook friends of yours that write posts about how much they hate “fake people?” There’s an 8.7 percent chance that they’re fake, too. In its company filings, Facebook says that it has more than 83 million fake profiles.”

That’s a lot of fakies!

“Paid advertisers on Facebook have had a range of options for targeting ads across criteria like age, gender, interests and location. Now the social network is extending more of those options to brands’ page posts to target subsets of their fan bases.”

“Ouch! Shares of Facebook dropped another four percent today, leaving the company’s stock price just above $20 a share — almost half where its shares debuted in a mid-May IPO. And let’s not even talk about the $45 a share Facebook hit on its first day of trading. That seems like a distant memory. The news hasn’t changed since Facebook’s latest wave of selling, which began when Zynga spooked investors with its lousy earnings report last Wednesday and continued with Facebook’s own unspectacular earnings. Fear of mobile. Fear of a slowdown in user growth. And, in a sense, just fear.”

“A lot of individuals feel it is necessary to text, check email or play around with their mobile phone in the middle of a movie at the local cinema. Many have complained about the annoying light, but there’s an app for that… Kyle Goomansingh may have the answer to the bright light that can distract moviegoers. It’s an app called In The Dark, which was developed to adapt to the room’s light and allow cellphone users, who cannot bare to look away from their device for two hours, to text message or email without causing a disturbance.”

I don’t think you should be checking your phone while at the “cinema” lol but this is definitely a welcome app!

“In yet another example of why you shouldn’t text and drive, an Alabama college student drove off a cliff while texting. Fortunately, he survived, but incurred some serious injuries. After six months of recovering, he’s finally able to talk about it. Right before Chance Both’s truck went over a cliff, he texted, “I need to quit texting, because I could die in a car accident.” Both suffered a broken neck, a crushed face, a fractured skull and traumatic brain injuries, a local news station reported. He was brought back to life three times by doctors.”

WOW! What a story. Don’t text and drive.

“Starting next week, jobless Canadians will be able to pocket more of their employment insurance benefits if they find temporary jobs during their search for full-time work. A new pilot program announced in the Conservative government’s spring budget gets underway Sunday.”

“Arianna Huffington and her lieutenants may have overestimated readers’ willingness to pay for content: The magazine, O’Brien announced during a companywide meeting Wednesday afternoon, has switched to an unpaid model. It’s now listed as a free download in the iTunes store.”

“NBC researchers are finding that people who know Olympic results before the network’s tape-delayed telecast are more likely to watch it.”

You gotta see it happen for yourself, even if you’ve heard about it ;)

“Research In Motion is launching its new PlayBook tablet for advanced networks that will have a faster Internet experience, giving the Canadian tech company an updated product to sell before its new smartphones come to market. RIM’s latest PlayBook will be launched next week — in Canada first — and is designed for wireless networks with speeds equivalent to high-speed home Internet services on land lines.”

Oh RIM. I don’t know if this will help ya.

“Elephants are the Barry Whites of the animal kingdom, research has shown. They produce their own version of the legendary soul singer’s seductive bass tones – only much, much deeper. An elephant’s infrasound rumble, often too low for the human ear to hear, is used to keep herds together, and by males to find mates. It allows the animals to communicate over distances of up to six miles.”

How cool!! Great lead too, haha.

“Greenland’s ice seems less vulnerable than feared to a runaway melt that would drive up world sea levels, according to a study showing that a surge of ice loss has petered out… The discovery of fluctuations casts doubt on projections that Greenland could be headed for an unstoppable meltdown, triggered by man-made global warming. Greenland contains enough ice to raise sea levels by seven metres if it all thawed.”

“Author J. K. Rowling has decided to withhold her upcoming book from a handful of foreign publishers over fears of piracy. “The Casual Vacancy” is set for a Sept. 27 release in the U.S. and U.K. but will not be sent to certain countries like Italy, Finland, and Slovenia until it is officially published in English. Publishers in Germany and in France are the exceptions.”

“Wedding Crashers duo Vince Vaughn and Owen Wilson will play Google interns who are bossed around by managers half their age in The Internship, a comedy set to premiere in 2013.”

“Immortality is a great for True Blood, but it’s not something most people take seriously — except for Dmitry Itskov, that is. The 31-year-old Russian plans on making immortality a reality by 2045. His plan, “The 2045 Initiative,” will sound familiar if you’ve seen the James Cameron blockbuster Avatar — and he just needs a few billion dollars to make it happen.””

I don’t think humans should be trying to be immortal… it’s not natural!!

“Rare, century-old baseball cards discovered in an Ohio attic have fetched more than US$566,000 at auction. The cards were from a rare series issued around 1910 and featured Hall of Famers like Ty Cobb and Honus Wagner.”

Perhaps something I can dig up will fetch me a fortune and I can pay for my wedding, lol. 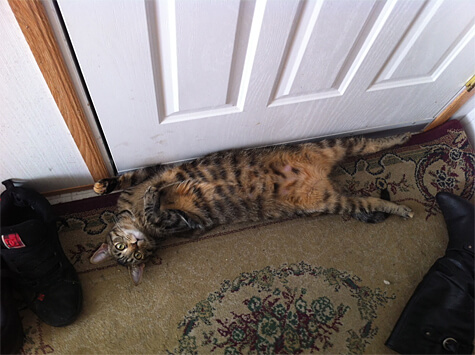 Linda Hoang is a Canadian blogger based in Edmonton, Alberta, who writes about travel, food lifestyle and pet topics. She's also a seasoned social media/digital strategist with a journalism background. Linda loves exploring the world with her husband Mike, eating their way through cities, supporting local businesses, and photographing Instagrammable Walls. She is the founder of the Edmonton International Cat Festival and a fur-mom to two cats and two dogs.
PrevPreviousClicks of the Day: Wednesday, August 1, 2012 Edition!
NextClicks of the Day: August 3, 4, 5 2012 Weekend Edition!Next