“While crews work to clean up a pipeline leak south of Edmonton, officials are raising concerns over how much damage was truly done to the area… Penn West said that as much as 300,000 litres of “produced water” escaped the system… Penn West said the leaked fluid is almost 99% water with low levels of oil… An environmental expert who spoke to CTV News said even a level of one percent is high, and can damage soil.”

“Edmonton motorists and cyclists will soon have a new tool to help them share the road. The city is preparing to install Edmonton’s first “bike box” – a large green-painted square with a white bicycle symbol – that’s meant to help make cyclists more visible at the intersection.”

Interesting idea… I personally dread driving by cyclists. One wrong move by either party and you’ve got an accident on your hands!

“City officials are projecting a surplus of nearly $11 million for the past year. Now at the end of the second fiscal quarter for 2012, city finance experts are projecting a $10.6 -million surplus by the end of 2012. Part of those cost-savings came down to lower than expected interest rates within the Capital Project Financing program — which saved the city nearly $5 million. The city also saved $4.2 million in wages after several public transit and corporate services positions went unfilled during the year.”

“Nearly one year after a distracted-driving law took effect, police, the Alberta Motor Association and the transportation minister say too many drivers are refusing to hang up their hand-held phones.”

“Despite worrying economic signs globally and near-constant warnings from financial leaders at home, Canadians are racking up higher-than-ever debt levels.
That’s according to a report released Thursday from TransUnion, showing the average Canadian’s total non-mortgage debt reached $26,221 in the second quarter of 2012 — marking the highest level since 2004 when the credit bureau first began tracking debt levels.”

Proud that Mike and I are doing very well considering. :)

Is three the new two for some families?

“Census figures from Statistics Canada released earlier this year show the number of Canadian children aged four and under jumped 11 per cent between 2006 and 2011. Although highest in the Prairies — particularly Alberta, with a 20 per cent spike — it marked the first time in 50 years that an increase was recorded in every province and territory. Statistics Canada attributed the bump to a growing number of women aged 20 to 34 — the preferred age range for child-rearing — as a result of the children of baby boomers having kids of their own.”

“Alleged Aurora, Colo, shooter James Holmes met with not one, but at least three mental health professionals at the University of Colorado prior to the massacre. How long he met with each one and the depth of their involvement is not clear, but it adds to the picture of Holmes being clearly on their radar in the time period leading up to the shootings.”

“Disgraced cyclist Lance Armstrong will receive a lifetime ban from Olympic sports early Friday and be stripped of his record seven Tour de France titles after deciding to abandon his long fight against charges he led a sophisticated doping conspiracy throughout his career.”

(Longest headline ever lol but) Wow!!!

“Yearly flu shots could be a thing of the past as researchers have embarked on the first phase of human testing of a new universal vaccine… The vaccine is not designed from a strain of the flu virus, like traditional vaccines. Rather it was developed after feeding a computer with flu strains from the past 100 years.”

“Celebrities, politicians, start-ups, aspiring rock stars, reality show hopefuls — anyone who might benefit from having a larger social media footprint — are known to have bought large blocks of Twitter followers. The practice is surprisingly easy. A Google search for “buy Twitter followers” turns up dozens of Web sites like USocial.net, InterTwitter.com, and FanMeNow.com that sell Twitter followers by the thousands (and often Facebook likes and YouTube views). At BuyTwitterFollow.com, for example, users simply enter their Twitter handle and credit card number and, with a few clicks, see the ranks of their followers swell in three to four days.”

“With more than 500 million users accessing Facebook on cellphones and tablets on a monthly basis, the company has been working hard to convince investors it has a handle on its mobile strategy. The company on Thursday took a step to address concerns of users who have long grumbled about its mobile application’s sluggish response time and released a new version of its iOS mobile app, which runs on Apple Inc.’s iPhone and iPad devices.”

It better be faster!!!

“Finally, after years of waiting, it looks like Spotify will soon launch its music streaming service in Canada, according to the Swedish company’s recently published annual account.”

Maybe finally I will get what the big deal is about Spotify!

“A robot named Nico could soon pass a landmark test – recognising itself in a mirror. Such self-awareness would represent a step towards the ultimate goal of thinking robots.”

And then they shall take over the planet~

“Some of Canada’s biggest wireless carriers finally got a glimpse of the new BlackBerry smartphones this week, as part of Research In Motion’s worldwide effort to drum up enthusiasm for the devices.”

“Canada’s largest newspaper chain has gone live with paywalls on four of its newspapers’ websites, making users to pay for content they read online when they exceed the number of free articles allotted per month.”

“If you feel like your coach seat is more cramped than it used to be, it may not be your imagination. Passengers paying the lowest fares are feeling the squeeze as airlines look for ways to boost revenue. That’s not exactly a new story, but The Boston Globe is the latest to pick up on it. The newspaper writes today that “several airlines (are) squeezing seats closer together in order to pack in more passengers, create rows with extra legroom for people willing to pay more, or both.””

We just keep on getting gouged don’t we!

“If you’re worried about picking up an infectious disease this summer, you may be fretting about catching West Nile disease from a mosquito, H3N2v influenza from a pig, or salmonella from a cantaloupe. But for those who like to dabble in pure medical horror, there’s little scarier to ponder than a brain-eating amoeba lurking in your tap water. That’s exactly what CDC investigators found when they swabbed the plumbing in the houses of two people who died of primary amoebic meningoencephalitis in 2011. The illness, which is extremely rare, strikes when the amoeba Naegleria fowleri travels into the brain through the nose and olfactory nerve, causing fever, vomiting, seizures and coma. It usually kills its victims within a week.”

“As the show’s catalog states, “some former Olympic sites are retrofitted and used in ways that belie their grand beginnings; turned into prisons, housing, malls, gyms, churches. Others sit unused for decades and become tragic time capsules.” We’re as horrified as we are fascinated by the fact that billions of dollars are spent every two years only to see such a sad — sometimes bizarre — fate.”

“An elderly parishioner has stunned Spanish cultural officials with an alarming and unauthorised attempt to restore a prized Jesus Christ fresco… Cecilia Gimenez, who is in her 80s, was reportedly upset at the way the fresco had deteriorated and took it on herself to “restore” the image.”

LOL I can’t stop laughing when I look at the restoration!! Oh dear.

“Gag reels are always fun, especially when a cast is as upbeat and charming as that of “The Avengers.” In the collection of goofs and jokes from the film, Robert Downey Jr. (Iron Man) and Gwyneth Paltrow (Pepper Potts) are seen cracking up over Iron Man’s swarmy lines and Mark Ruffalo (Hulk) is unable to place a prop on a table without dropping it. But the undeniable star of the four-minute reel is Tom Hiddleston (Loki). (OK, the stuff about Coulson is pretty good too.)”

“A collection of shots created by dropping shaped water balloons on bald man’s heads while colored lights illuminate the scene. ”

“At this point, it’s pretty clear that animals are by far the best photobombers out there (for proof, just check out our Twitter avatar). Even since we last rounded up the best of the best, the animal kingdom has been hard at work ruining people’s pictures (or making them way, way better, which is the way we prefer to look at it).” 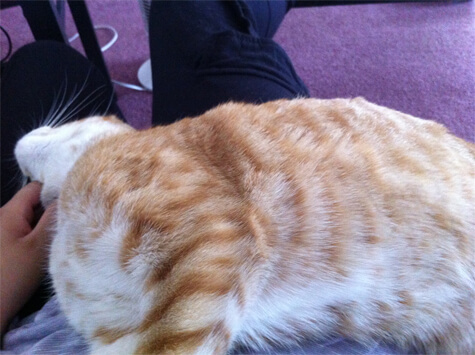 Loki is very fit – he looks like a blimp in this photo but he really is very fit! Lol.

Linda Hoang is a Canadian blogger based in Edmonton, Alberta, who writes about travel, food lifestyle and pet topics. She's also a seasoned social media/digital strategist with a journalism background. Linda loves exploring the world with her husband Mike, eating their way through cities, supporting local businesses, and photographing Instagrammable Walls. She is the founder of the Edmonton International Cat Festival and a fur-mom to two cats and two dogs.
PrevPreviousSocial Media Column: Tweet your way to a new job
NextClicks of the Day: August 24, 25, 26 2012 Weekend Edition!Next