From November 7-10, I was invited to the 26th Christmas in November as a Gastropost blogger/tweeter. It was a wonderful experience! Check out a collection of my tweets here, my Day 1 recap + recipes, Day 2 recap + recipes, and Day 4 recaps & recipes!

We kicked off Day 2 of Christmas in November with breakfast (sausages, bacon, waffles, chocolate croissants), followed by a short nature walk around Lac Beauvert to Brittney’s favourite Fairmont Jasper Park Lodge spot – a little bridge over a babbling brook. 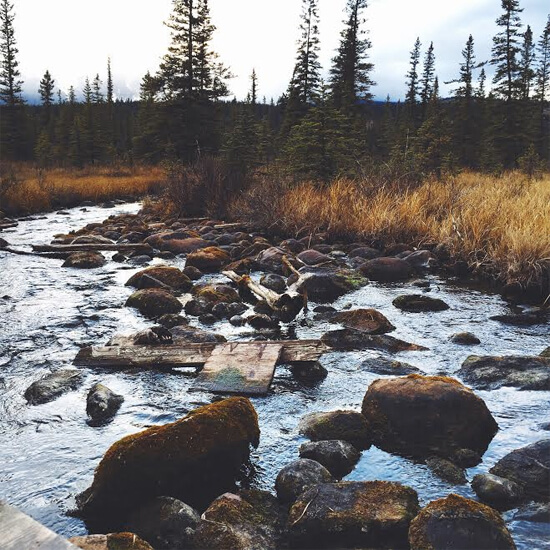 Then I rushed back for my first official #JasperCIN session featuring Alberta Passion for Pork and Anna and Michael Olson.

PRO TIP: Arrive early for your sessions, otherwise you get stuck in the back like I was for this first session. 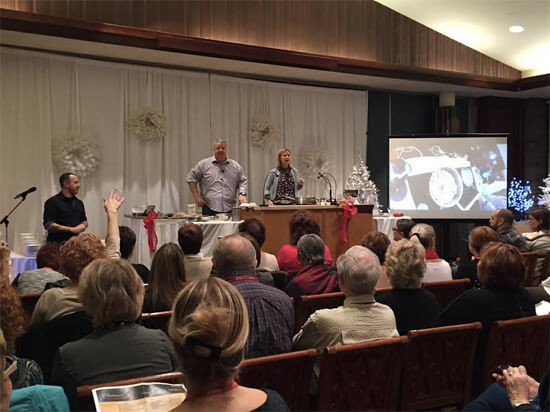 This was my first experience with Anna and Michael – I don’t watch them on TV and haven’t read their cookbooks, but I know they are a big deal in the Food Network world. There were about 80 people in that morning session and many you could tell were big fans! A lot of them were also first-timers to Christmas in November! My impressions of Anna and Michael were: cute, funny, professional. They worked very well together (I would hope so, since they’re married!) and were clear on the point of the session:

“Our goal is for you to go home and make these recipes,” Anna said.

Anna is known for baking and proved her baking chops in this session by baking savoury dishes to keep in line with the Alberta Pork theme. 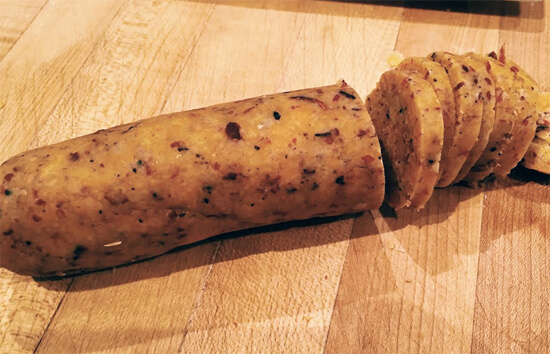 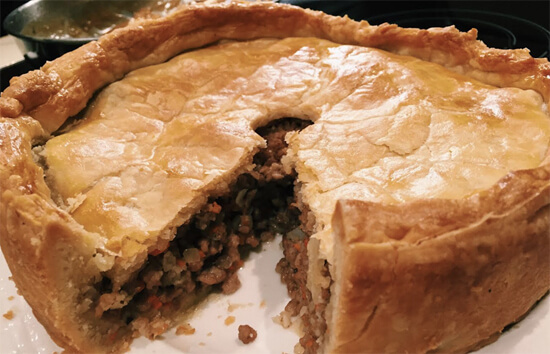 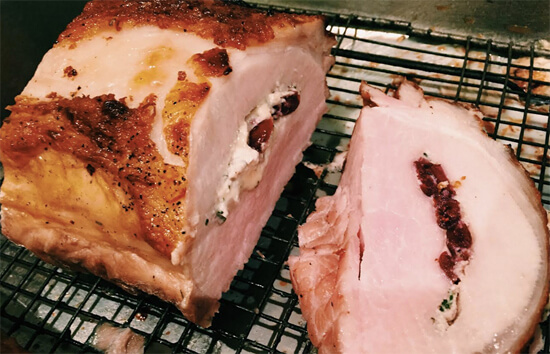 Get the Brie and Cranberry Stuffed Pork Loin Recipe.

Here are some baking tips from Anna: 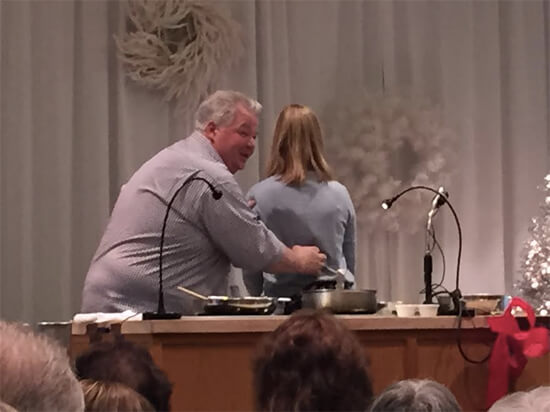 Michael demo-ed a stuffed pork tenderloin and pork sliders. He was funny in using Anna as an anatomical example of different cuts of meat. He also had quite possibly one of my favourite tips of the whole weekend:

LOL, pretty practical! Also: Using ricotta cheese in with the brie for stuffing helps bind and hold the stuffing together better than other cheese would.

Overall I thought the session was great. The Bacon Cheddar Shortbread Cookies were SO good. We didn’t get a chance to taste the stuffed loin, sliders or tourtiere because they didn’t cut out or prepare samples for everyone (at least for that first session). I also learned these fun facts:

Thanks Anna and Michael for the great kick-off session to Christmas in November! I can’t wait to try your recipes. 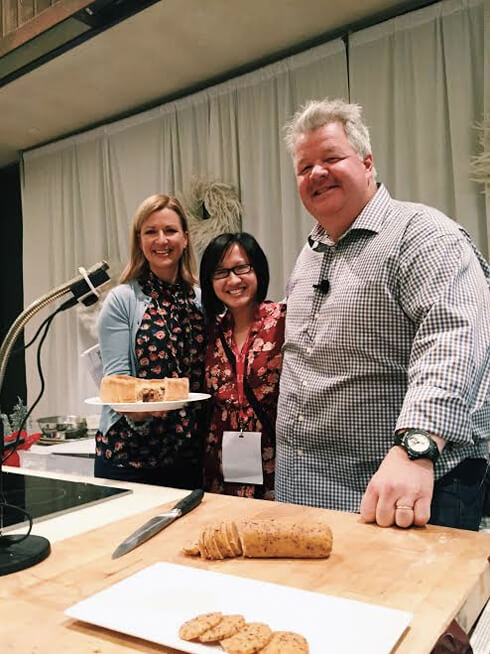 Thanks for the great session Anna and Michael!

Next up was the Merry Luncheon which featured Sun Choke Soup (very similar to potato bacon, it was hearty and delicious), Smoked Herb Crusted Sable Fish with warm quinoa salad, fennel, and citrus and radish chive emulsion (the fish was perfect), and White Chocolate & Saskatoon Berry Bread Pudding.

And then we were off to a special VIP cooking demonstration with Chef Lynn Crawford! Now I was really excited to see Chef Lynn at Christmas in November because I had spent a week with her back in March when she was NAIT’s Chef in Residence! I (and everyone else at NAIT) thought she was such a great chef with a huge, funny, friendly, personality. I thought the same thing at Christmas in November: 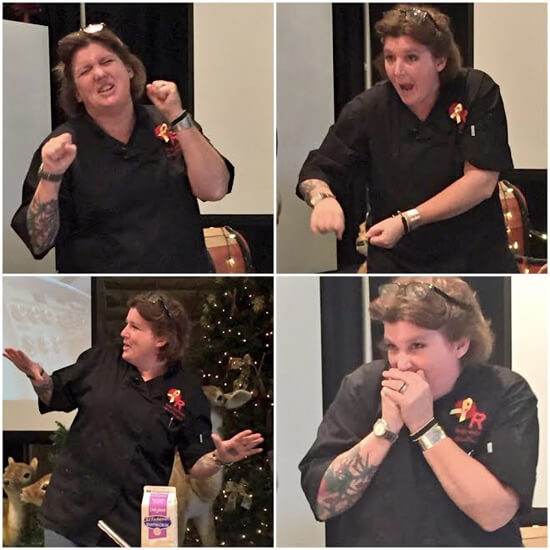 Chef Lynn was loud, funny, spontaneous, and just a pleasure to watch at Christmas in November. The session we were in with her was super interactive. We were making Rum Raisin and Apple Strudel with Sweet Vanilla Whipped Cream and she asked a bunch of people in the audience to go up to work on it. 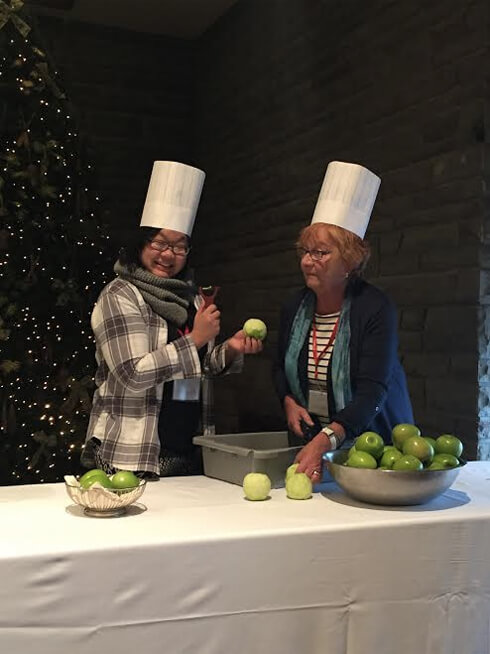 Pam gets right into the demo!

Her session wasn’t necessarily the most technical, nor did she really give tips or advice on how best to make a strudel, but the session was fun. Plain and simple. Everyone had a great time. She played music off of her iPhone and got people up on their feet to dance. She played around with a close-up camera and got in people’s faces. She joked around with Christmas in November attendees and took shots with a bunch of people – it was so fun!

We’re going for the longest apple strudel (in Jasper)!

The apple strudel came in at about 16-feet long – certainly not the longest ever but the longest strudel ever to be made in Jasper, we were certain of that! And it was delicious. 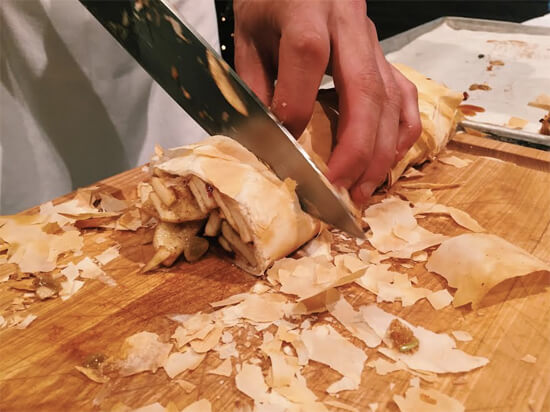 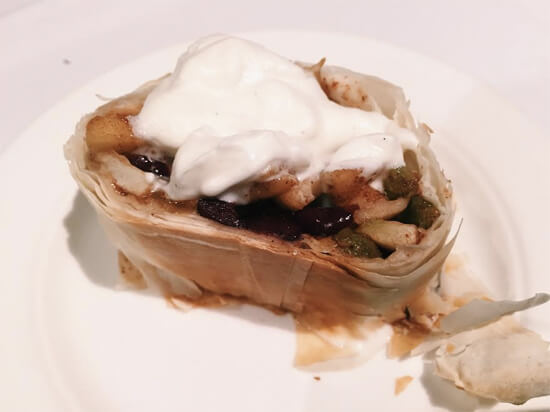 Get the Rum and Raisin Apple Strudel Recipe! 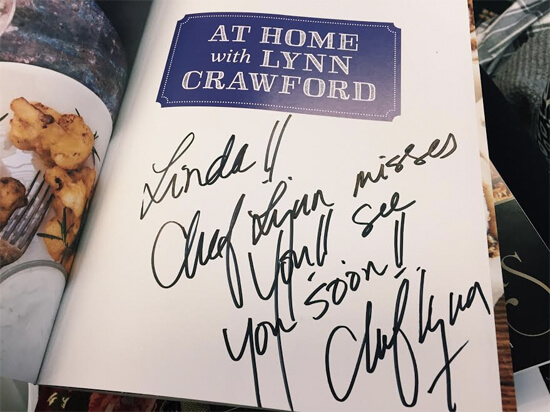 Afterwards, Chef Lynn signed copies of her cookbook and posed for photos. She remembered me from NAIT (yay!) and even brought up NAIT’s Culinary program to the rest of the crowd (to which everyone applauded! Go NAIT!) Thank you Chef Lynn for a fantastically fun session (we expected nothing less!) As the star/headliner of Christmas in November, you definitely lived up to the hype. 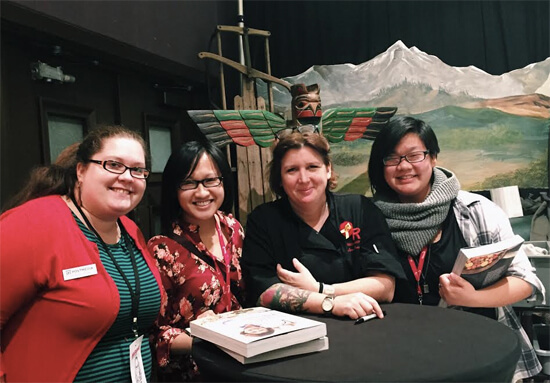 Thanks for the great session Chef Lynn!

Our last session on Day 2 of Christmas in November was with a pair of familiar faces – Connie de Sousa and Jack Johnson of CHARCUT Calgary. I’ve only been to CHARCUT once, but boy was it memorable! We were wondering what Connie and Jack would be showing us in this session (meats? cheeses?) Their session theme ended up being: Cocktail party! 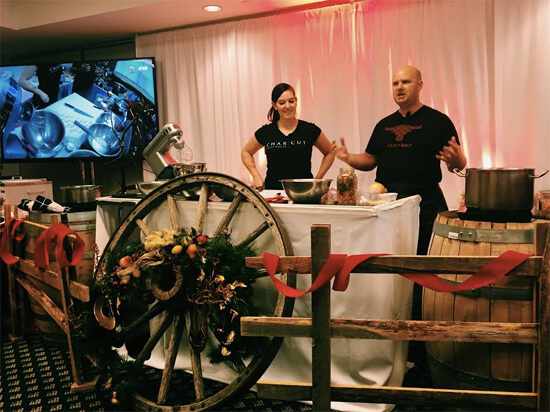 It’s time for a cocktail party with Connie & John from CHARCUT!

We would be talking about cocktail garnishes, Caesars, and quick pickling. They would also touch on some desserts – such as making a chocolate mousse and instant fudgiscle. 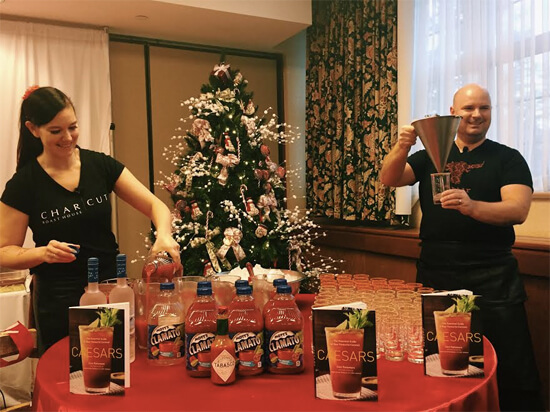 PRO TIP: When making alcohol drinks (or adding sauces to plates) use a sauce gun to get the most accurate pours. In the case of these Caesars, 7 ounces of alcohol – no more, no less. 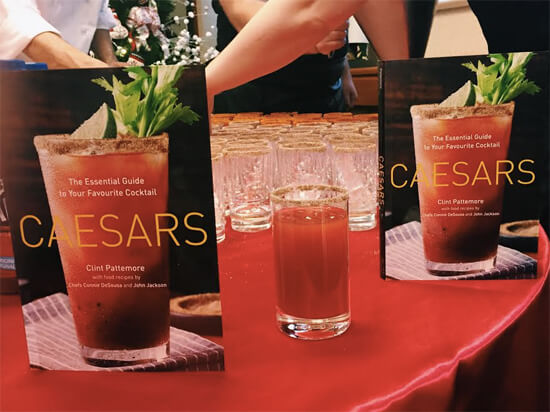 Ready for some Caesars?

Connie and John demo-ed two Caesars, one with the classic celery salt rim, and the other with a spicier togaroshi rim. You can get togaroshi at any Asian supermarket (such as TNT). I am not normally a fan of Caesars but thought the one with togaroshi rim was quite good! 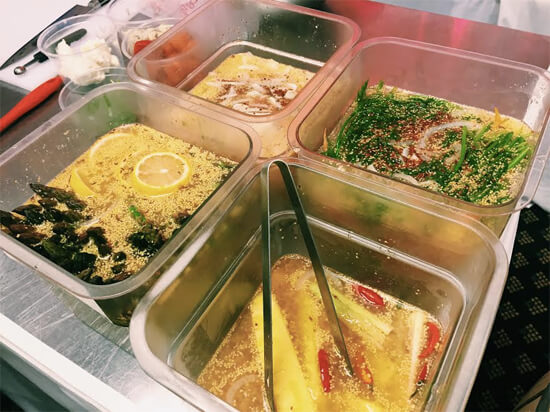 On to pickling garnishes! Did you know? Connie and John pickle about 3,000 jars worth a year at their restaurant? Crazy.

Here are some pickling tips from John: 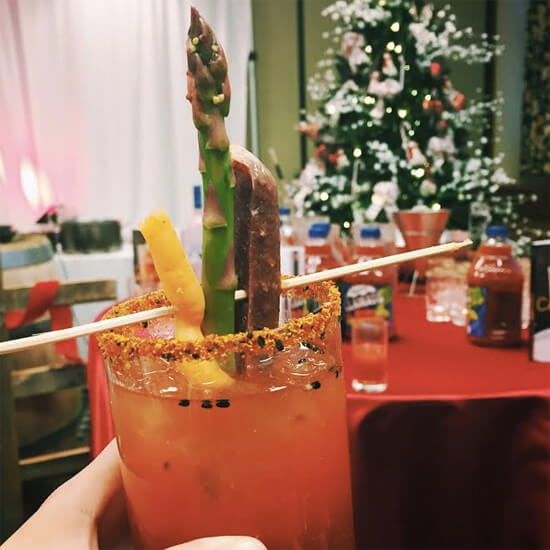 Connie and John say when it comes to pickling, think of flavours you love and then pickle with them! They were pickling asparagus, pineapples, carrots and sausages with lemongrass, chilis, lemons, and onions. John’s preferred sausage to pickle with: Kielbasa sausage!

Get the Quick Kitchen Pickling Recipe. 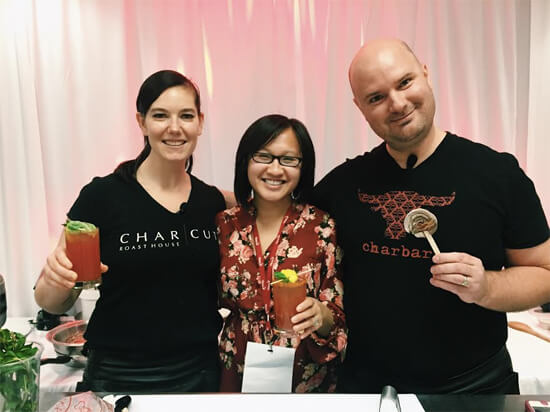 Thanks for the awesome session Connie & John!

In the session we learned more about Connie and John’s history – they started cooking together in 1999 at the Owl’s Nest in Calgary. Later they parted ways but came together again in the United States – opening hotel restaurants together. Charcuterie was starting to get really popular in San Francisco, so they wanted to bring that concept to Calgary. When they began to build in Calgary, it was during the recession and some people said they were crazy – but it worked! They’re going to be opening their newest restaurant the Charbar in 2015 and I am soooo excited!

Thank you Connie and John for a great session! They were funny, friendly (that’s becoming a theme among Christmas in November presenters) and encouraged session goers to come up to the front to get a closer look of the demo and try dishes/Caesars.

We finished the day with a Holiday Dinner of Marinated Beet and Goat Cheese Salad, Spring Creek Beef Tenderloin, and Milk Chocolate Hazelnut Bar. The beef tenderloin was fantastic and as someone who is not a big fan of chocolate desserts (or desserts in general), I thought the milk chocolate hazelnut bar was incredible!

A delicious Holiday Dinner at Christmas in November!

Whew! What a day. It is really go-go-go from morning to night! We had so much fun and were stuffed by bedtime.

Linda Hoang is a Canadian blogger based in Edmonton, Alberta, who writes about travel, food lifestyle and pet topics. She's also a seasoned social media/digital strategist with a journalism background. Linda loves exploring the world with her husband Mike, eating their way through cities, supporting local businesses, and photographing Instagrammable Walls. She is the founder of the Edmonton International Cat Festival and a fur-mom to two cats and two dogs.
PrevPreviousChristmas in November Day 1 Recap + Recipes for Holiday Cocktails!
NextChristmas in November Day 3 Recap + Recipes for Gougeres, Crackers and Chocolate Truffles!Next