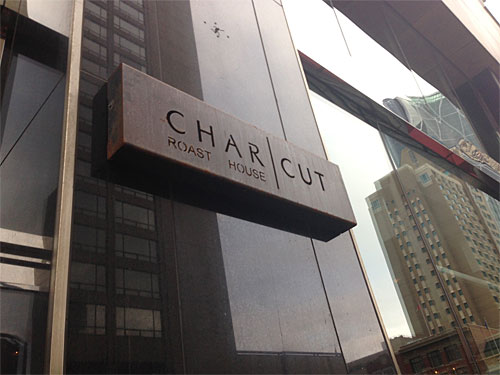 During our weekend in Calgary, there was one place I knew I had to go – CHARCUT Roast House. I follow a lot of foodies on Twitter and Instagram and one of them in particular – Carmen used to live in Edmonton but has since moved to Calgary and so going through her Instagram feed can be painful because she posts amazing photos of incredible looking food but it’s all out of Calgary! While she covers a lot of different restaurants and also her own amazing home cooking, a restaurant she often raves about is CHARCUT so I’ve been hearing about CHARCUT for…ever it feels like and was overjoyed that I finally got the chance to try it out during the Calgary trip! 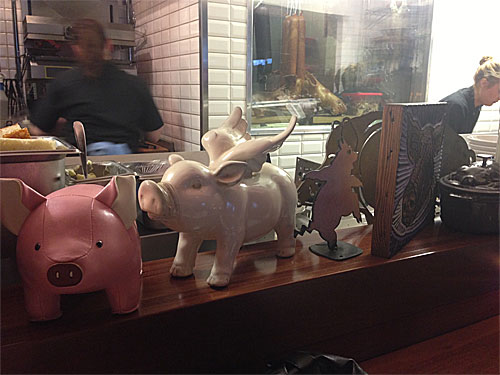 We were very lucky and thankful to Carmen because it was her who actually helped get us a reservation. (Thank you!!!) We ended up seated at the ‘VIP Eating Bar’ which was awesome because it put us right up close to where all the kitchen action was happening and up close to the amazing and so friendly CHARCUT Chef/Owner Connie DeSousa! 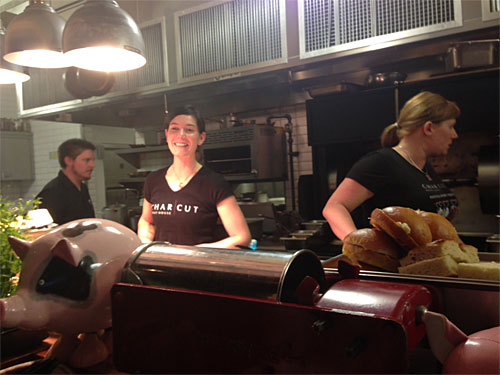 Connie was such a sweetheart. She gave us a run-down of the restaurant and listed off some of her favourite/recommended dishes. CHARCUT is all about shared food with a big focus on MEAT! 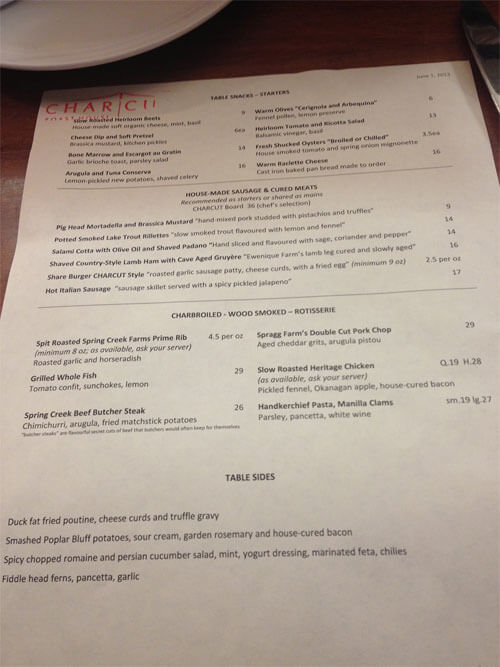 We were told the menu at CHARCUT changes daily – on the top corner of the menu page you could see the date printed for that day. We had received a few recommendations on must-try dishes off of Twitter, and many were also the same dishes that Connie suggested we get as well. Rachel wasn’t really hungry (a shame really!) so me and Kathy shared most of the food, which I will now post below: 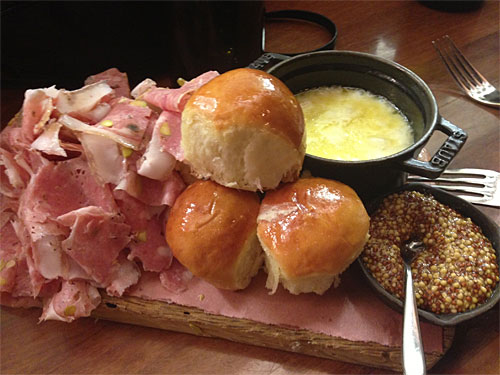 This was one of the best dishes of the night! The Pig Head Mortadella and Brassica Mustard is hand-mixed pork studded with pistachios and truffles with a hot, sour, amazing mustard. The Warm Raclette Cheese comes with cast-iron baked pan bread (made to order). It was all the perfect combination that we kept bumping hands to reach for more for! ;) 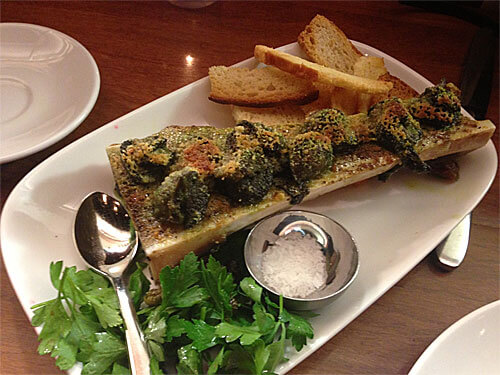 The Bone Marrow and Escargot au Gratin was another favourite of mine (not so much anyone else’s, because they didn’t really like the escargot). But I love escargot and this was just the perfect flavours. It came with garlic brioche toast and a parsley salad and salt. We were advised to put some parsley on the toast, add escargot, scrape off bone marrow and sprinkle with salt. I couldn’t get enough! There’s not a lot on the bone marrow so you really have to scrape but what you get is golden. The big salt also adds to the texture. Delicious. 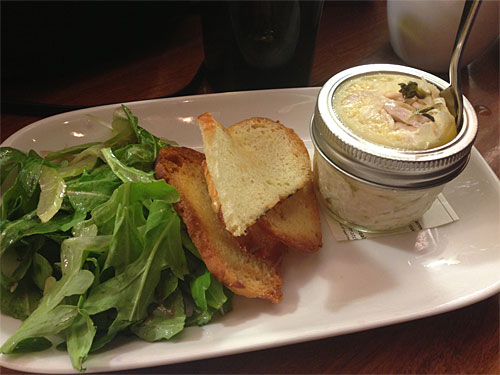 Arugula and Tuna Conserva ($16) at CHARCUT

The arugula and shaved celery in the Arugula and Tuna Conserva is amazing! So fresh. So light. So good. I’m not sure what they dressed the arugula in but it was perfect. Connie described this dish was their take on ‘canned tuna.’ The tuna comes out in a har, packed with lemon-pickled new potatoes. You’re supposed to take off the lid and pour out its contents like so: 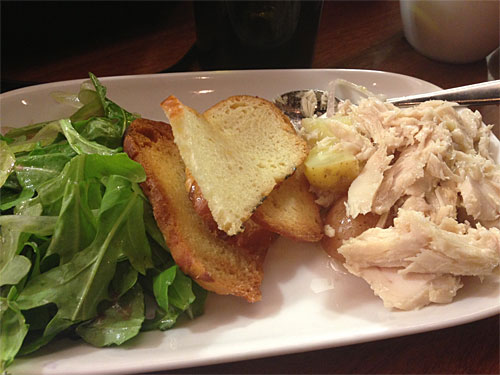 Like previous dishes, it’s all about placing some of the tuna, some of the potato, some of the arugula onto the toast and settling in for a bite full of flavour. As I said, the arugula and shaved celery was really my favourite part of this dish. Simple but so successful! 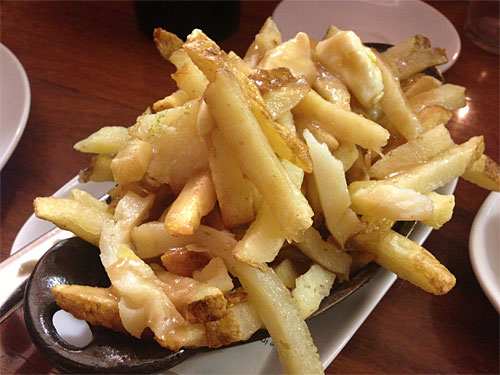 We ordered the Duck Fat Fried Poutine with Cheese Curds and Truffle Gravy and this was probably our least favourite dish of the night. I think it just didn’t really match with the light quality that all the rest of the dishes had. The poutine was good and I’ve never had a duck fat poutine before (or truffle gravy) so it was a fairly tasty new experience but it wasn’t anything too special and not my favourite cut of fries either. 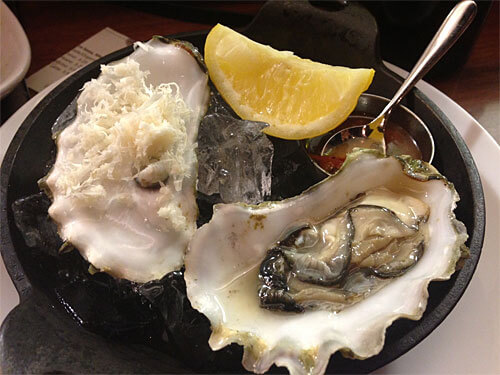 Fresh Shucked and Chilled Oyster ($3.5 each)

I ordered a Fresh Shucked and Chilled Oyster just to try and it was really good. It’s hard for me to describe what an oyster tastes like (the sea? Lol) but if you’re an oyster lover, you’ll love these. 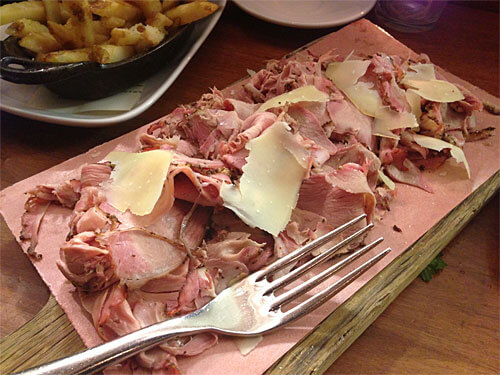 Our last meaty board was the Shaved Country-Style Lamb Ham with Cave Aged Gruyere (Ewnique Farm’s lamb leg cured and slowly aged). Without accompanying bread, eating this alone – plus the other meats we already had – can really give you the meat sweats. Lol. Meat Heaven. We were stuffed. And I’ve had a few charcuterie boards at other restaurants before that were kind of lack lustre so CHARCUT’s boards really blew me away. 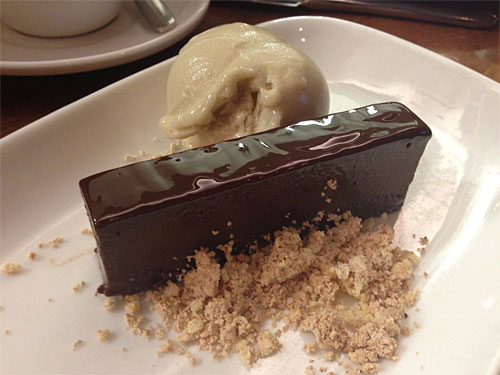 Milk Chocolate Icy Square Terrine, Hazelnut and Potato Chip Powder and Banana Sorbet (I think this was around $8?) at CHARCUT

Since Rachel wasn’t too hungry she just ordered a peppermint tea and a dessert. Her dessert was amazing – a Milk Chocolate Icy Square Terrine with Hazelnut and Potato Chip Powder and Banana Sorbet. We tried a bit of her dessert and loved it. The terrine is very, very rich. So chocolate lovers – rejoice. I am not a huge chocolate fan so my couple of small bites were enough for me but it was It was very rich, sweet, decadent. Lovely. Rachel’s favourite was the banana sorbet – she basically demolished the dessert. Delicious! 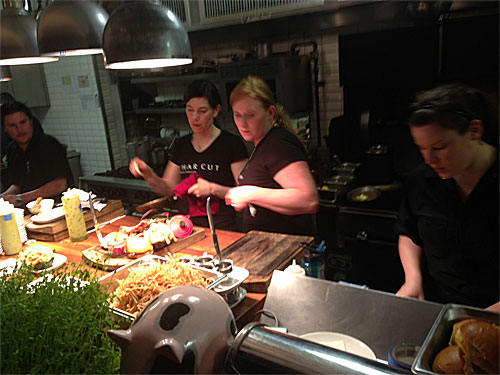 We loved sitting at the VIP Eating Bar because we really got to see all the chefs and servers in action – calling out dishes, how long it would take for the dish to come out, what table it was for, what was missing and what should be added – those little kitchen nuances that you rarely get to see in a professional restaurant. It was like watching an episode of a cooking show on the Food Network, lol. 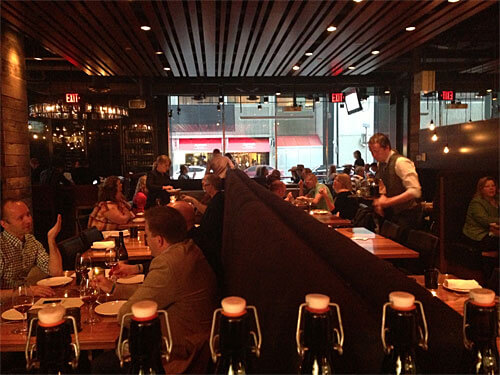 CHARCUT is classy. And the place was packed. The prices are what you’d expect at a more high end, upscale restaurant. Splitting our several shared dishes amounted to the same price we’d be paying for say one full entree at a fine dining restaurant – depending on how hungry you are or how many people you’re splitting the food with. There is a lot of hype surrounding CHARCUT but I think it’s well deserved. It’s a unique concept for a restaurant that’s executed wonderfully. The food was delicious and the service was fantastic. Would I come back many many times? Probably not – given my frugal personality, I’m not one to frequent pricier, upscale restaurants but I’m always open to trying it and I’m thrilled to have gotten a chance to try it during my brief time in Calgary. If I do come back I’d love to try more of their ‘entree’ dishes, which we didn’t (and probably a good idea, we wouldn’t have been able to walk if we had! So much food).

I love the focus on local and making everything themselves. I also like that they try to switch things up with new items and daily menu changes. And I love the fun aura surrounding Connie – Top Chef season 1 finalist. As a big Food Network fan, it was just a thrill to see her in action in the kitchen (and so close thanks to the eating bar seating!) 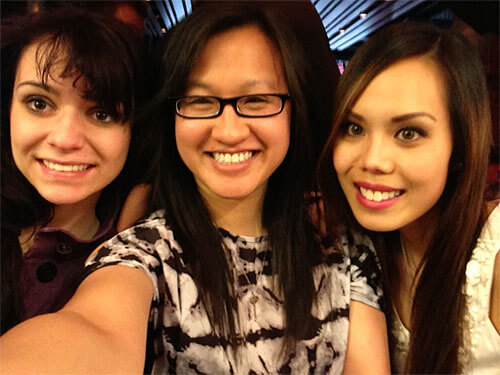 It was a truly great experience overall. The rave reviews surrounding CHARCUT are well-deserved, if you get the chance to try this restaurant, do it! You won’t be disappointed.

Linda Hoang is a Canadian blogger based in Edmonton, Alberta, who writes about travel, food, lifestyle and pet topics. She's also a seasoned social media/digital strategist with a journalism background, the founder of the Edmonton International Cat Festival and co-founder of Stop Race Based Hate, an online anti-racism education tool. Linda loves exploring the world with her partner Mike, eating their way through cities, supporting local businesses, and photographing Instagrammable Walls. Linda is a fur-mom to two cats and two dogs.
PrevPreviousSocial Media Column: TEDxEdmonton – The Future Of…
NextReview: Urban ShabuNext