I’ve now been at my new job at CTV for two weeks so I figured it’s about time I do a write-up about what exactly I’m doing there and how it’s been going!

My official title is “web reporter” but I’m only officially web reporter on weekends (for now ;) I obviously have intentions to advance to week day as soon as possible, lol). My web reporter duties includes developing, writing, updating online articles and just generally overseeing content for CTV Edmonton’s website. I work with reporters, producers and the assignment desk to gather information for the web articles. I had done a lot of web work when I was at Global (and I just feel very comfortable on a computer) so I settled into it all pretty quickly. :) 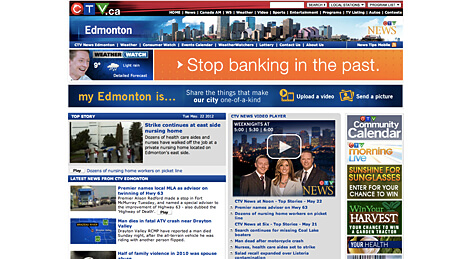 It’s a pretty interesting gig. You’re “reporting” in a sense but you don’t have to leave your desk to get all the elements for your story because there’s other people out there to do that. I’ve basically got various sources of information to take from in order to put together online articles – information from scripts, information from news releases, information from raw interview video clips ingested into the system, information from previous articles done on the topic and information straight from reporters on scene. That’s what makes it kind of interesting. I miss going out on scene and interviewing people myself and getting the all the information firsthand as I did when I did print reporting but the web reporting is interesting and fun because I’m able to tell a number of different stories in a day, as opposed to just focusing on one story that day, because I’m able to glean information from so many different sources. The job is as hard or as easy as you want to make it I suppose. I could just copy word for word what a reporter writes in their script and post that online but that’s not good enough for me personally, I’d like to try to make it as much my own work as possible. And I mean there’s no reason why you can’t make calls and do interviews from your desk as well, you just have to be careful you’re not overstepping if other people are already making calls or in my case I still don’t know what my phone number at my desk is so if someone has to call me back I don’t know what number I’m supposed to give them (ha ha!!)

Of course there are time constraints as well so sometimes you may have to just take from a script and that’s all you may be able to do if you’ve got to juggle various other web duties throughout the day but I’ve been making it a point to try and make the online articles as much my own research/reporting/writing as I can. (Of couse you still have to give credit to the reporters who are working on that individual story of the day, because they are the ones actually out there, gathering the elements and getting the bulk of the story information firsthand).

There’s also the social media aspect to it, which I’m still settling into (it’s interesting to see how different newsrooms handle social media). There’s also a video aspect to it (we select the videos we want uploaded to the site each day, have to send the requests to Toronto, Toronto uploads the video to the system but we have to add the videos to our local website). It’s actually quite a bit of work for one person (which for the most part there is only one person working the web at a given time) so it can get very busy.

I’ve both trained and filled in on week days doing web work so far in my last two weeks and I’ll likely fill in on web work in the future but I’m also being trained on different shifts and different duties (morning assignment desk, writing, and editing are all duties that I’ll be dabbling into in the coming weeks either to fill my hours in the week/fill in for people taking vacation days, etc.) I’m also told there’s room in there for some on-air reporting as well but that’s not my primary focus at the moment. It would be great, eventually, if I could get some on-air opportunities but my focus is the web and news on the digital medium. The digital aspect is the most important of all mediums in the news industry right now (I think) and that’s where I’d like to be in some capacity (at least at this point). I’m basically looking forward to learning everything and contributing as much that I can in this web role! :) 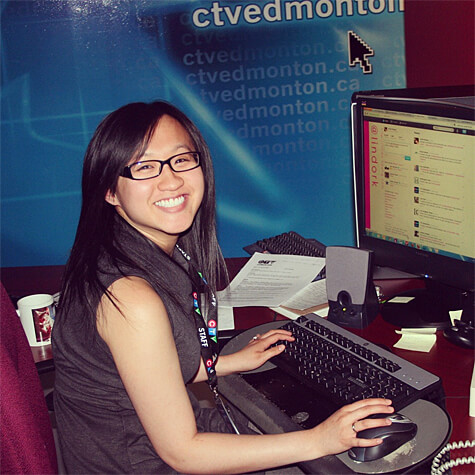 It’s overall extremely satisfying to know you’ve played a hand in producing content for a major local news website, ensuring its got fresh, new and detailed information, while linking to, informing and interacting with audiences to give them the latest news as it comes in.

I basically just wanted to write a post summing up what I’ve been up to. It’s been a great two weeks so far. I’m having a lot of fun and learning a lot. My co-workers are extremely nice, the weekend crew is great, the people who trained me are fantastic and I’m just very grateful for this opportunity and this next step in my life/career. My friend Greg gave me a piece of advice before I left Global – that the more newsrooms you can work in, the better experienced, the better person you’ll be because of it. And I feel that’s true so far! It is really interesting to see how different newsrooms work! Overall I feel that I’ve settled in well so far and I’m happy to be there!! :)

I’ve posted a bunch of online articles on my website just to have it as part of my portfolio record (I didn’t post everything because a lot of the online updates I do are also just short, small rewrites of RCMP releases which I don’t think need to be re-posted, lol). But here’s some of the stuff I’ve put online in the last two weeks:

I don’t know if I’ll end up posting everything I end up writing for CTV’s website because I think that could end up being a long list, but we’ll see how it goes.

Linda Hoang is a Canadian blogger based in Edmonton, Alberta, who writes about travel, food lifestyle and pet topics. She's also a seasoned social media/digital strategist with a journalism background. Linda loves exploring the world with her husband Mike, eating their way through cities, supporting local businesses, and photographing Instagrammable Walls. She is the founder of the Edmonton International Cat Festival and a fur-mom to two cats and two dogs.
PrevPreviousNews Online: Hardisty Care Centre nurses, health care aides set to strike
NextPhoto of the Day: Tuesday, May 22, 2012Next