I recently had the pleasure of contributing a restaurant Top 10 list to YellowPages Canada. The company has been around for more than 100 years (do you remember the YellowPages business directory books arriving on your doorstep?) and in recent years has undergone a rebrand. YellowPages Canada now has a new project called “YP Playlists” – a collection of lists on a variety of topics, helping you connect with the best places to eat, shop and play in your neighbourhood.

My Top 10 spots to eat in Chinatown originally posted on YellowPages.

My list: “More than just Chinese food: Edmonton’s top Chinatown spots” was originally published as a YP Playlist on July 31, 2015.

Here it is cross-posted on this blog (in no particular order, as much as my friend Brittney would love to have Urban Shabu be #1. lol)

Chinatown has some of the best – but often overlooked – culinary offerings in Edmonton. From a delicious bowl of Vietnamese beef noodle soup (pho) to traditional Chinese dim sum and more, Edmonton food blogger Linda Hoang shares some of her favourite spots to dine in and around the Chinatown strip.

Hot pot has surged in popularity in Edmonton in recent years. Urban Shabu and its rival down the road – 97 Hot Pot – offer some of the best hot pot in the city. What is hot pot? Think of it like Asian fondue. It’s all-you-can-eat, where you order meats and seafood (your standard ones, like sliced beef, pork and chicken, as well as your exotic ones, such as oysters, prawns, squids), vegetables and noodles, and you cook it in your own little “hot” pot (you get to pick your broth base). Don’t forget the extensive sauce bar. 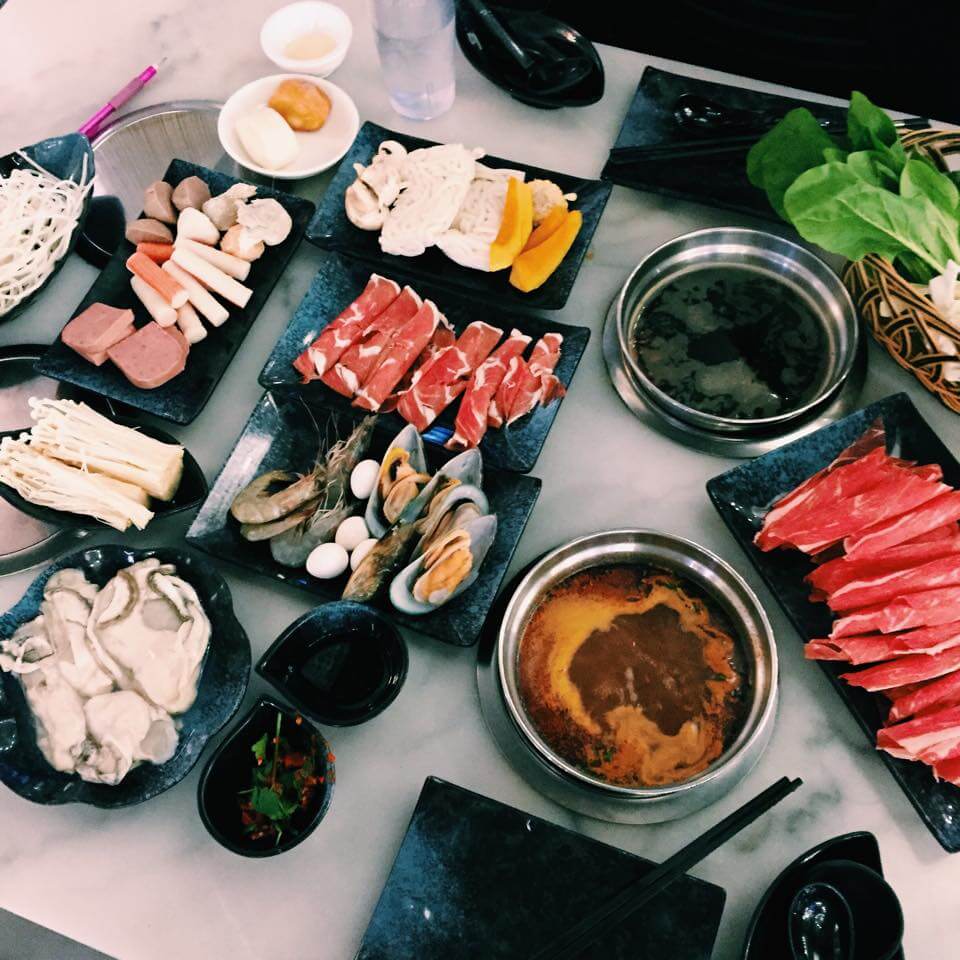 King Noodle House is home to the famed ‘Moustache Man,’ the grumpy – yet lovable – Vietnamese owner and server of this pho restaurant. For 20 years, people have been coming to King Noodle House for their pho (beef noodle soup). You won’t find much else on their menu save for a handful of appetizers and vermicilli. Challenge yourself with the #1 Extra Large, go a bit spicy with the Bun Bo Hue, or get the popular rare, thinly sliced beef that cooks in the broth.

Arguably the best Vietnamese banh mi submarines in the city – and also definitely the cheapest. This family-run shop serves simple, filling subs: Crunchy baguettes stuffed with carrots, cilantro, cucumber, hot peppers (optional – it’s really hot!) and your choice of various sliced meats. I love it with the pâté. Try some traditional Vietnamese bean and jelly desserts while you’re there, and catch an episode of Paris by Night ( a Vietnamese musical variety show) on their TV. 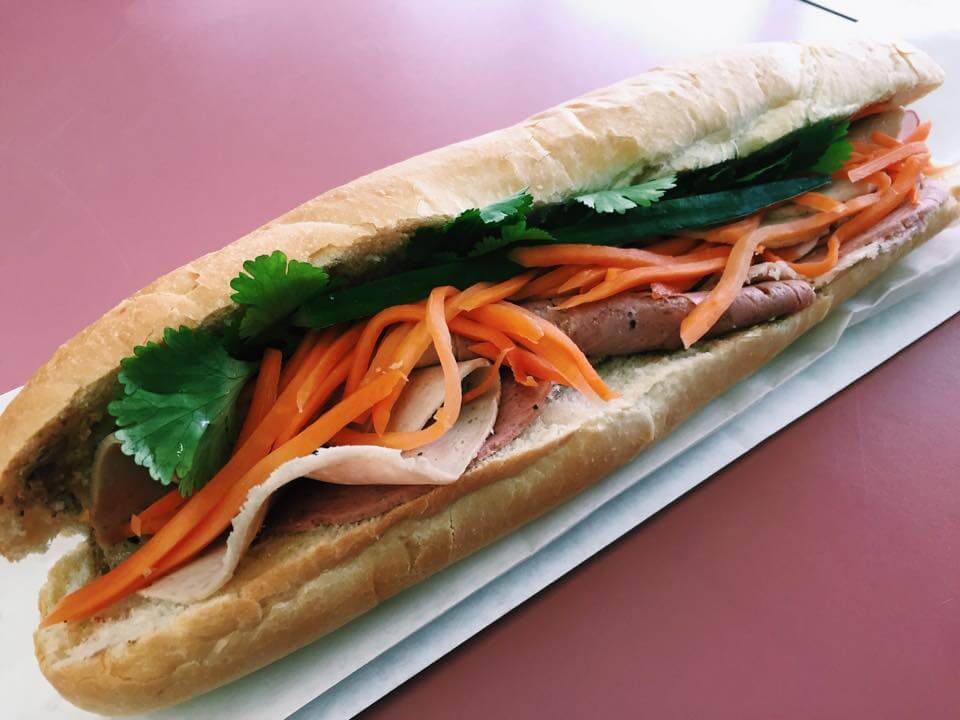 Although it’s off the Chinatown strip, Viphalay has some of the best Thai I’ve ever eaten in Edmonton. It constantly delivers on good, flavourful Thai food. The space is small, so lots of people opt to order take-out here, or give their beautiful 99 Avenue location a try. You can’t go wrong with anything here – from the Tom Yum soups to the red wine shrimp and appetizers, curries and the red wine shrimp, pad Thai and drunken noodles.

A welcome Korean addition to the Chinatown strip, head to Lee House for some Korean favourites like the ddukbokki (rice and fish cakes in a sweet red chili sauce), jap chae (Korean glass noodles), bulgogi (thinly sliced beef) and bibimbab (rice with veggies, meat, and an egg). Lee House is famed for their fried chicken, and I’m also a big fan of their soups. Try the budae jigae – a kimchi stew with pork belly, ham and veggies.

There’s a few different Chinese-style noodle restaurants in Chinatown but Tao Garden is unique because of its ‘Build Your Own Bowl’ option. Quite literally, you build your own noodle bowl by choosing your broth, noodle and toppings. Two toppings are included in the base price, then you add $1.25 per extra topping. I’m like a kid in a candy store when it comes to the toppings! Try it with spam, too – you won’t regret it. I also recommend Cui Hua Gui Lin Noodle House down the road. 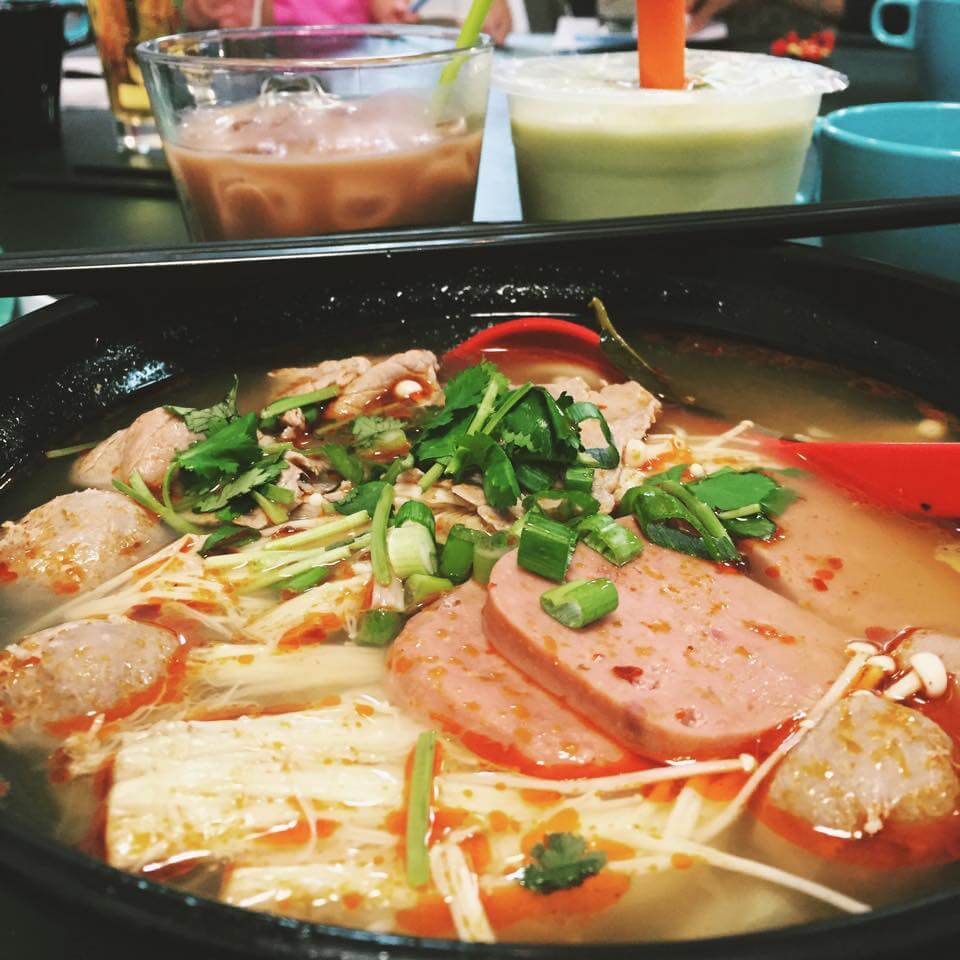 Build your own noodle bowl at Tao Garden located at 9642 107 Ave. in Chinatown.

Head to Dynasty for some quality Chinatown dim sum. Order a variety of dishes, including steamed pork dumplings (shu mai), shrimp dumplings (har gow), chicken feet and rice noodle rolls. They come served in steamer baskets or small plates, and are small portions. You’re charged by how many small baskets/plates you get (ranging from $3 to $5 each). It’s recommended to dim sum with a group!

Craving Japanese? How about all-you-can-eat Japanese? In Chinatown, Zen is the answer. Choose from a big selection of hot and cold dishes, including sashimi, sushi and maki rolls and cones, plus udon noodle soup, rice, teriyaki chicken and beef and more. The prices are on par with other all-you-can-eat spots in town.

I go to Pagolac for their famous Bo 7 Mon. Suitable for two people, the Bo 7 Mon is beef, served seven different ways. It ranges from Bo Luc Lac (cubes of perfectly seasoned beef) to Chao Bo (a beef congee rice porridge), to beef wrapped in leaves, a beef ‘fondue’ (like a hot pot) and more. Most of the portions are small but, when you combine them all – you’re leaving full. Also, be prepared to get messy – it’s very hands-on!

By day, it’s a lovely Chinese bakery where you can get traditional buns and pastries; by night, it’s a favourite for the party crowd. Garden Bakery & Restaurant is one of the few Chinatown spots open late (4 a.m. on Fridays and Saturdays). Try their Hong Kong style pasta, pan fried noodles and Chinese snacks. Feeling adventurous? I love the jellyfish and shredded pork hock or chicken.

There’s also so many more that I could list/recommend (Gui Lin Noodle House, Boualouang, Xu Hue, Padmanadi, 97 Hot Pot, Nhon Hoa, to name a few). I just wanted to make sure the YP Playlist had some representation across a few different southeast Asian countries. I’ve also been (slowly) populating an Edmonton Chinatown Restaurant review series so watch for more Chinatown restaurant reviews soon! (I am always there but am not as quick or consistent to recapping my experiences as I’d like to be, oops).

Linda Hoang is a Canadian blogger based in Edmonton, Alberta, who writes about travel, food lifestyle and pet topics. She's also a seasoned social media/digital strategist with a journalism background. Linda loves exploring the world with her husband Mike, eating their way through cities, supporting local businesses, and photographing Instagrammable Walls. She is the founder of the Edmonton International Cat Festival and a fur-mom to two cats and two dogs.
PrevPreviousRecap: #YEGFoodCrawl through Edmonton’s Chinatown
NextSocial Media Notes (#79) – Links for the Week of August 3 – 9Next