I remember when food crawls were shiny and new. Something called Dishcrawl hit our city a few years ago and got a lot of people excited. The concept was an easy one to get excited about – for a set price, “crawl” to a number of different restaurants, try their food and meet their owners. I went on maybe 4-5 different crawls and really enjoyed each experience, though with each experience, the portions got smaller and the price got bigger. When it started, I believe it was about $40 per person for 4 spots. Before it ended, it was up to $60 a person (maybe even $65?).

After while it just really didn’t feel worth the cost anymore, though my love for the concept still lived on.

That’s why when I heard about the YEG Food Crawl this spring (2015), I was really intrigued. YEG Food Crawl is presented by the City of Edmonton’s McCauley Revitalization group, where for a set price (just $35 per person), you get to visit 4-5 restaurants/shops in Chinatown, sample their food, meet the owners, and learn about the history of the area. The first couple of events were done at the end of May – some public and some private, and another event just wrapped up in mid-July. The Chinatown food crawls are organized by Freya Fu, and I have to say she’s done such a fantastic job on these events! 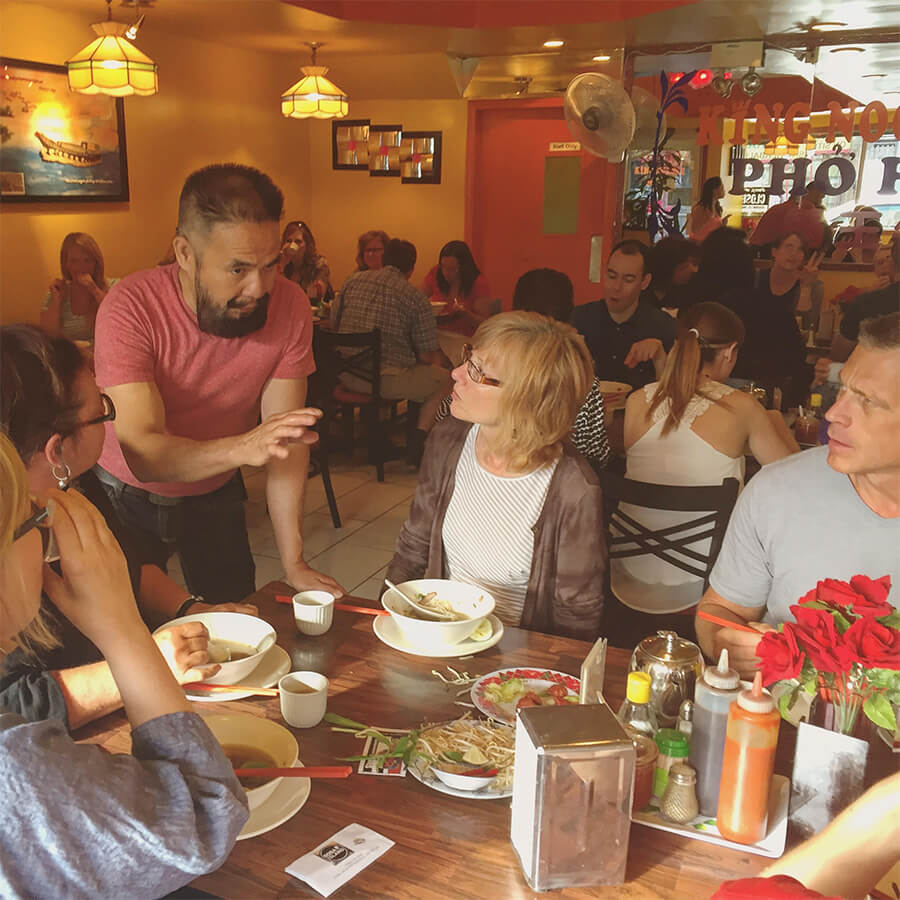 The answer to both questions was: Yes!

For the July event, 30 us kicked off the crawl at King Noodle House (10615 97 Street) – sampling our famous Vietnamese beef noodle soup (pho). Each table also got to share our grilled pork balls (nem nuong) appetizer. My dad (lovingly referred to as ‘Moustache Man’ by many regulars) came out and talked to each table, sharing with them some history about our restaurant and our pho – including that we’ve been serving Edmonton for 20 years, that the recipe itself is passed down into the third generation now (it was my dad’s grandparents’ recipe!) and that the broth itself is cooked for 12 hours. Mom, dad and I were delighted to learn that only 3 of the 30 in the group had ever been to our restaurant before. What a fantastic way to expose our soup and story to new people! 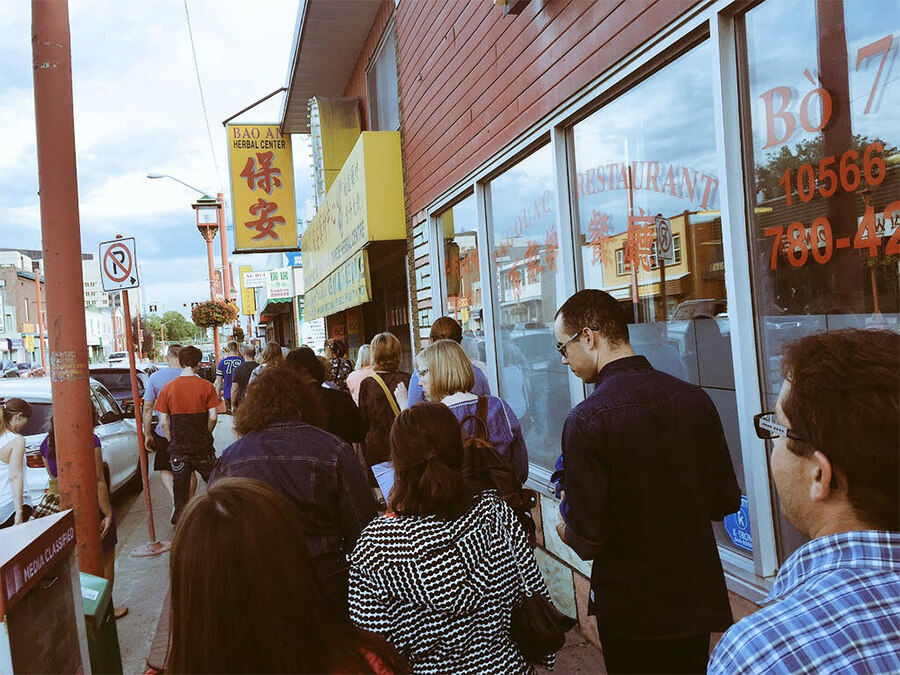 On our way! Great night to crawl around Edmonton’s Chinatown.

Next on our crawl was a quick stop at the Shan Shan Bakery (10552 97 St), where each crawler got a take-out box filled with coconut tarts, walnut cookies, and swiss rolls. We heard from the owners, who said their Asian style wedding cakes and birthday cakes are quite popular (my family is more partial to the Asian fruit-filled sponge cakes too). 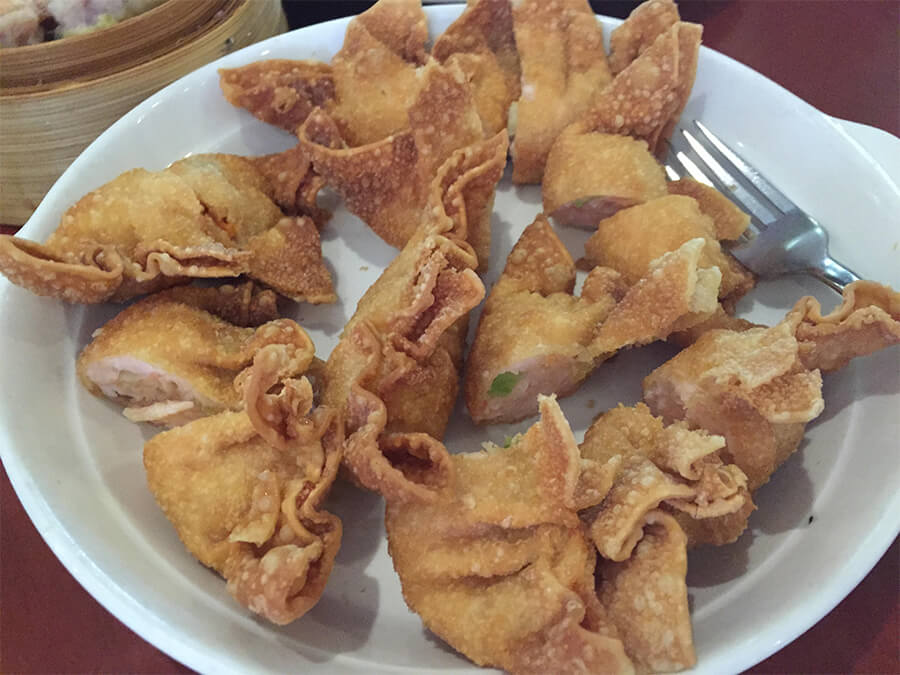 Our third stop was getting dim sum at Dynasty Restaurant (206 – 9700 105 Ave). Tom, the owner of Dynasty, told our group that the restaurant specializes in dim sum and banquets. They do a lot of 10-course Chinese meals, and during the Lunar New Year – almost every weekend is booked with celebrations. 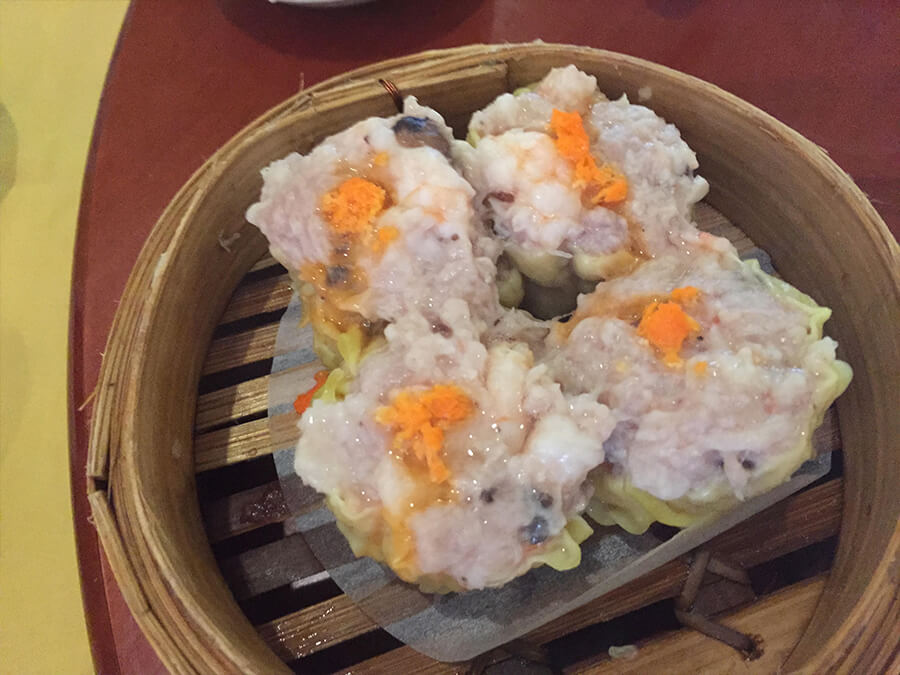 At Dynasty we shared deep fried shrimp dumplings, steamed pork dumplings (siu mai), steamed sponge rolls (dessert/sweet), and pan fried beef with rice noodles. There were a few people in our group who were actually in from Fort Saskatchewan and said they’d always wanted to try eating in Chinatown but were never really sure where to go, and now after crawling a few places, they already had some great, first-hand experience and could confidently return! 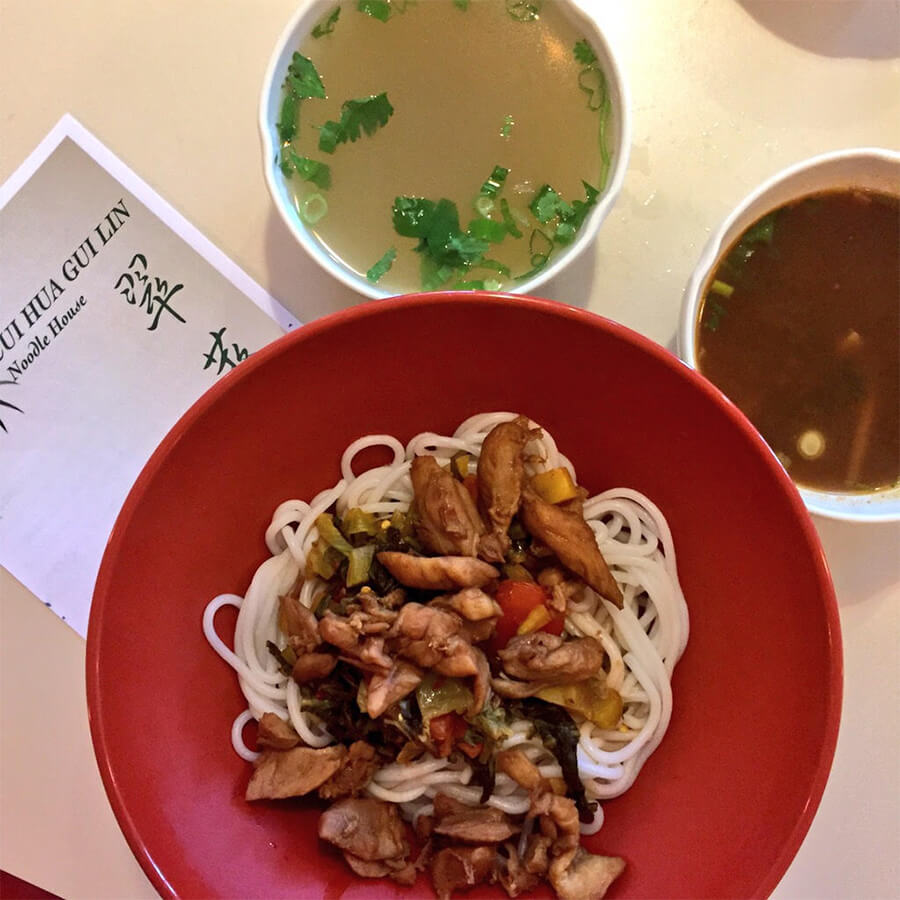 Try both types of broth at Gui Lin Noodle House!

Our fourth stop was Cui Hua Giu Lin Noodle House (10626 97 St), just across the road from King Noodle. Gui Lin specializes in Chinese-style noodles. For the crawl, they wanted to showcase their two different broths. We got a sample size bowl of chicken vermicelli that had preserved veggies and tomatoes, with either a Gui Lin Style broth of cilantro and green onions, or a House Style broth featuring bamboo shoots, cilantro, fermented black beans, and green onion (has a hot and sour taste). I love the veggies at Gui Lin so damn much! The owner Tony talked to our group about the Gui Lin region in China (they like spicy food there!) 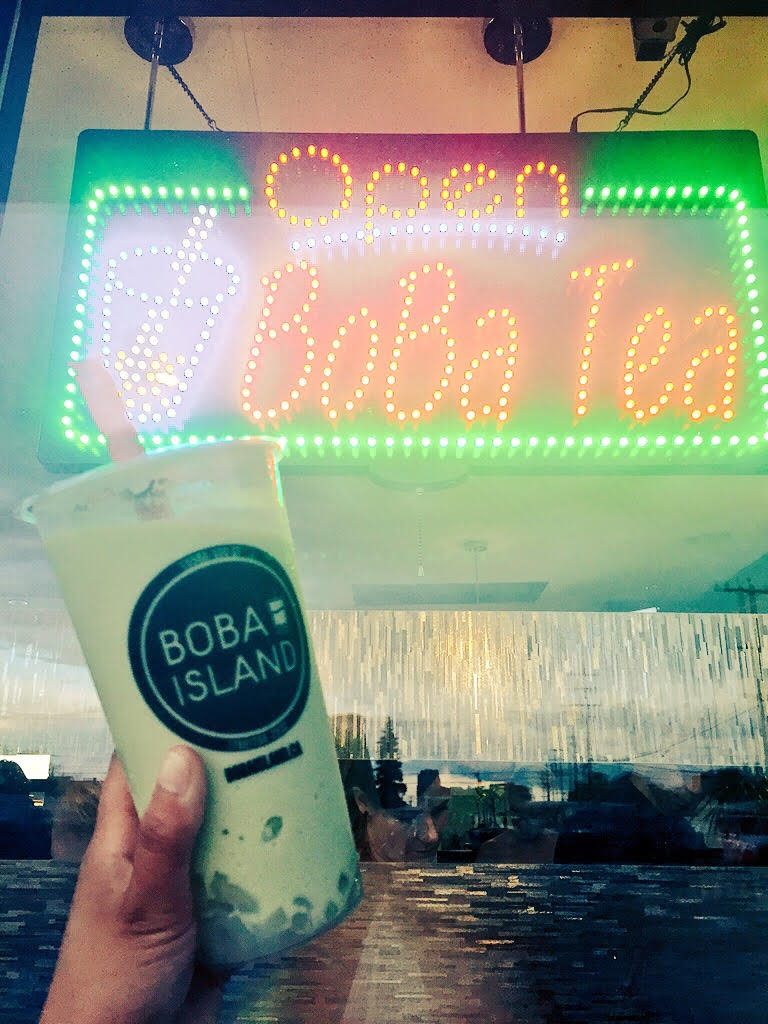 A perfect end to the evening.

Before our final food stop we took a quick detour into Lucky 97 Supermarket (10725 97 St). In Lucky 97, crawlers got to roam the aisles, buying some of their own products or just checking out what the market had to offer. Throughout all of this and during the walks between stops, Freya and I shared our own tidbits about Chinatown (which I won’t repeat in case we do another crawl and I need to reuse some of my did you knows ;)).

Our final stop was at Boba Island Bubble Tea (10588 100 St), where each of us got to select a bubble tea flavour of our choice. 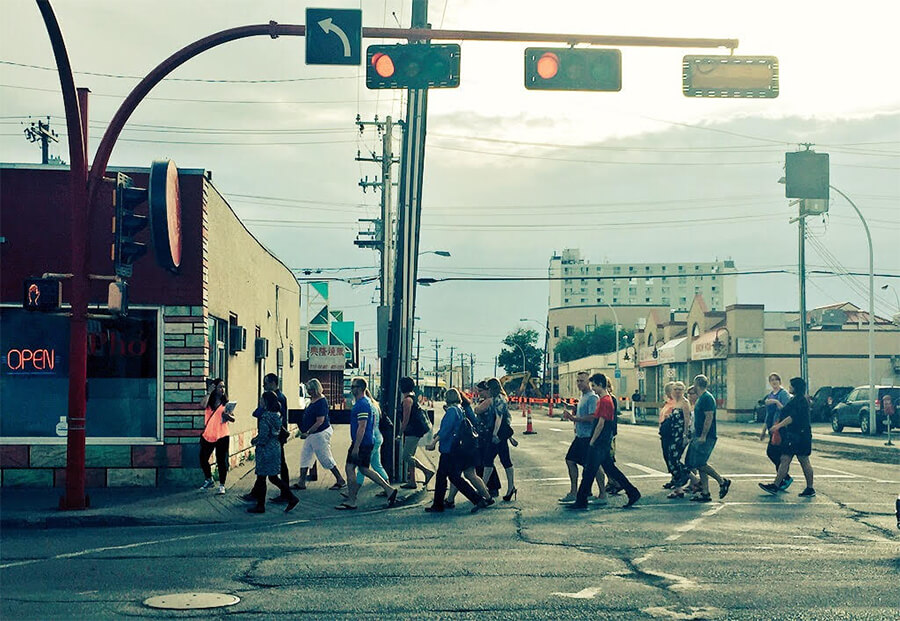 Crawling around Chinatown is so fun! I can’t wait to do it again.

It was a really amazing night! Something one of the crawlers said that stuck with me was that attending the crawl felt like she was on vacation somewhere else – she was just having so much fun and learning so much about an area that she didn’t know much about before. That was basically the sentiment throughout – very few of these crawlers had ever been to any of the stops that were on this Chinatown crawl but all of them left excited, full and wanting to return to Chinatown soon!

From the business perspective, I love this crawl because they are extremely fair in terms of pricing with the business owners. As a consumer, $35 is an absolute steal for the amount of food, fun, and information you get throughout the crawl. It’s also such a great way to put a face to the owners of these fairly hole-in-the-wall-ish spots, and actually hear them share a bit of their story. Language barrier is always something that pops up when you’re in Chinatown, so this crawl was a nice way to bypass that. It’s also such a great way to get people past any fears they may have of venturing into Chinatown – which in some areas for sure can look a bit sketchy and run-down.

I thought Freya was an excellent host (and I hope I was good too – I certainly had a lot of fun doing it!) and it was just a really lovely way to spend a Wednesday evening. I think the YEG Food Crawl is a really fun and different way for the city to try to revitalize / bring people into the neighbourhood and I hope they do it for other areas of the city too! I could definitely see a food crawl through Alberta Avenue being of interest, for example.

Check out Sharon’s recap of the May 30 Chinatown Food Crawl she went on for some more perspective. In hers, it seemed like the owners didn’t share as much information about the food or restaurants. I think Freya took this feedback and incorporated it into the crawl I was on – as all of the owners were eager to chat to participants about what they were all about.

If you’re interested in attending a YEG Food Crawl, be sure to watch their Eventbrite Page, Facebook, and Twitter account for updates! It sells out pretty quick (because it’s so fun and such a good price!) For the most part, feedback for all of the events so far has been super positive. Freya has really set the bar high for these food crawls and I hope she continues to lead more! Chinatown is one of my favourite culinary spots in the city and I’m thrilled that there are events (and people / organizations) who are trying to show Edmontonians why it’s a special place and why they should be visiting. I’m excited to see how it grows and expands in the future!