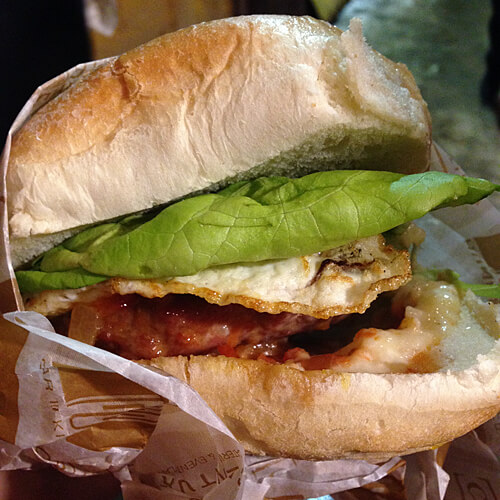 ‘Black market burgers,’ as Chef Andrew Cowan calls it, have returned to Edmonton.

The popular #yegalleyburger concept – where Edmontonians line up in the alley behind Hundred Bar & Kitchen on a random night to buy $5 gourmet burgers sold through the back door of the restaurant’s kitchen – had been on a hiatus of sorts.

“It had been a while. We didn’t know what was going on in the alley with all the construction with Woodwork and Craft. It had been blocked off and there was stuff piled everywhere, with no access,” Cowan explains.

But now construction has wrapped up and the popular back-alley burgers are back.

Along with likening it to a black market, Cowan calls it a social event.

From there, word spreads.

“It’s interesting if you look at the Twitter stats you can see the reach of where it goes,” he says. “It’s incredible.”

The stats Cowan is talking about:

The date and time for each #yegalleyburger changes. It will never always be on a Friday, or always land on the third week of the month. You wouldn’t be able to jot it into your calendar far in advance. Cowan likes to keep it random. He says that makes it more interesting.

“You have to watch and figure out when it is. It makes it more of an event, more people come out and it’s a lot more fun,” Cowan says. 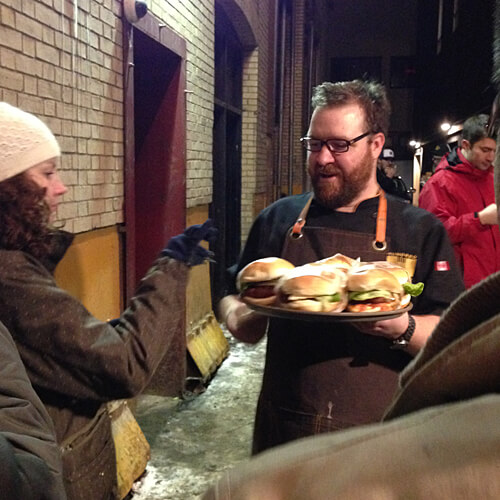 Last Friday, dozens of people lined up in the alley for Cowan’s chorizo roasted red pepper relish with mayo and fried egg burger. He prepped 51 burgers and sold 51 burgers. He says that element of first come first serve before the product sells out, also adds to the appeal.

“You get down early because you don’t want to miss out. If 52 or 53 people wanted burgers, nope. They can’t. Line up earlier next time,” Cowan says.

Tips for attending a #yegalleyburger event: 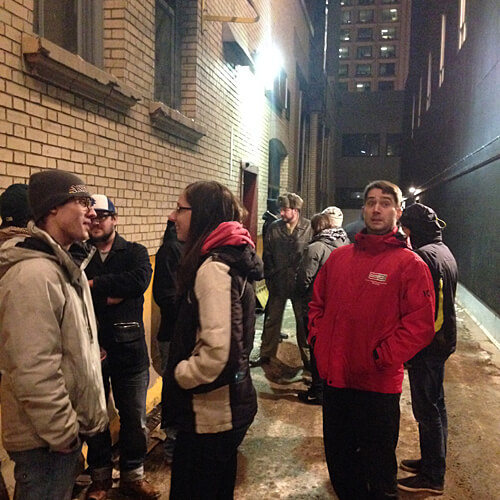 #yegalleyburger began about a year and a half ago, with some persuasion by local realtor, and popular Twitter Jerry Aulenbach (@ZoomJer). The concept is taken from CHARCUT restaurant in Calgary.

Aulenbach saw the potential this kind of event could bring to the city.

“I loved it so much that I wanted Edmonton to have it too,” he says.

“Aside from an extremely delicious gourmet burger at a ridiculously low price, it was always a great social gathering. Everyone was so happy to be there for the same purpose, and nobody was every disappointed – excluding those who didn’t come early enough to get one, as there is always a limited number of burgers.”

Cowan says the turnout on Friday was a bit above average. The most burgers he’s sold at a #yegalleyburger event was 92. Another night he sold 70 burgers.

He’s put out lamb burgers, duck burgers, bison burgers – cycling through every so often, and also using the event as a testing ground for future restaurant menu items.

The chorizo burger from Friday’s #yegalleyburger is now on Hundred’s menu.

At $5 a pop, Cowan’s not making any money off #yegalleyburger – and that’s not the point.

Like Aulenbach, Cowan saw the potential of holding a unique, social event in downtown Edmonton, that brings together food and social media lovers.

#yegalleyburger is unlike any dining experience you’ll have.

“It’s not drugs but it has that same look. It’s black market burgers,” Cowan says.

“’We’re going to go around this corner here to get a burger.’”

Watch for announcements of the next #yegalleyburger, tentatively scheduled for mid-February.

Linda Hoang is a Canadian blogger based in Edmonton, Alberta, who writes about travel, food, lifestyle and pet topics. She's also a seasoned social media/digital strategist with a journalism background, the founder of the Edmonton International Cat Festival and co-founder of Stop Race Based Hate, an online anti-racism education tool. Linda loves exploring the world with her partner Mike, eating their way through cities, supporting local businesses, and photographing Instagrammable Walls. Linda is a fur-mom to two cats and two dogs.
PrevPreviousSocial Media Notes (#13) – Links for the Week of Jan. 6-12
NextSocial media weddings – CTV Morning Live & Avenue MagazineNext