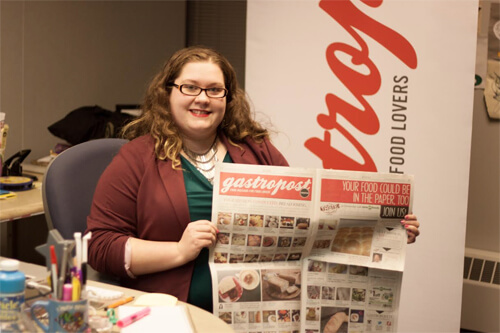 Brittney Le Blanc is community manager for Gastropost Edmonton and Calgary – a project that encourages food lovers to share photos of their meals. Photo supplied.

Gastropost Edmonton connects food lovers, cares about what you ate for dinner

“I don’t care what you had for dinner.”

This phrase is often used as a way to dismiss social media, an example of how useless and mundane posts on social networks can be. But there is a growing culture and community of those who very much care about the meal you’re having, what restaurant you tried it at, what recipe you used, and so forth.

That’s where Gastropost comes in. The Postmedia labs project takes the concept of what you had for dinner and embraces it, encourages it, and feeds into it.

Gastropost, which began in Toronto a year and a half ago, then expanded to Vancouver before recently arriving in Edmonton, sends food lovers on weekly food missions.

The missions ask people to take photos of what they’re eating, based on different themes, and share those images on Twitter or Instagram using the hashtag #gastropost, or submitting directly through the Gastropost website.

The photos are posted on the site, appear in search feeds for the hashtag, and some photos are selected and featured each week in the newspaper. Higher-quality or larger images submitted through the website have a greater chance of being featured in the paper. In Edmonton’s case, gastroposts appear in a two-page spread in the Edmonton Journal each Wednesday.

Gastropost Edmonton launched just over a month ago and Gastropost Calgary made its debut last week.

The project rebuts the argument that people don’t care about what you ate.

“I really do care what you’re eating for dinner because you might be eating at a restaurant that I haven’t tried yet and I want to know what’s good, what should I avoid, or should I try this restaurant,” says Brittney Le Blanc, Gastropost Alberta’s community manager.

“For example you might be using avocado in a way that I’ve never considered using it. It (food photos) inspires me to go on more culinary adventures and try new things.” 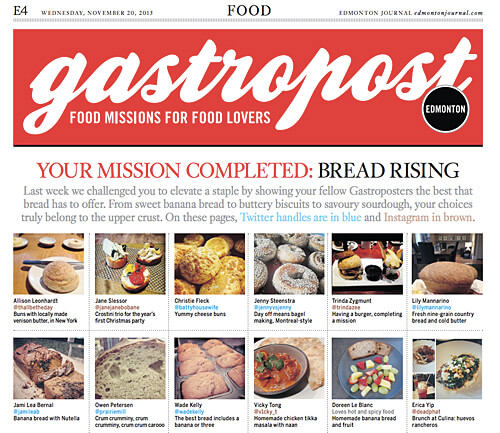 Every Wednesday, Gastropost appears as a two-page spread in the the Edmonton Journal newspaper.

She invites members, fields questions, encourages the community to take photos, moderates those photos, comes up with and puts out bi-weekly newsletters and mission announcements.

Since October, there have been six missions including something delicious, desserts, eat local, bread rising, say cheese, and this week’s theme: ‘Awaken to Bacon.’

Along with encouraging themed food photos, Gastropost also has a shop / eat local aspect, through its partnerships with Taste Alberta and Save-on-Foods.

“When we send out a mission every Monday, depending on what the mission is, Taste Alberta provides us with somebody who can act as inspiration, an Alberta producer or someone who works in the industry,” Le Blanc explains.

“After we get inspiration, Save-on-Foods provides us with a perk. That perk would be a coupon for a $1 off something or something that will help you complete that mission that week.”

Those who tie in the #tasteAB inspiration also have a greater chance of getting their photo in the paper.

The local tie-in is unique to Gastropost Alberta.

“Alberta has such a rich province in terms of producers and great food and a great community. It does make more sense to partner with Taste Alberta,” Le Blanc says.

“We’re a little bit more agriculturally-focused I would say than Toronto or Vancouver. This allows us to play within our province rather than the two hub cities,” Le Blanc says. 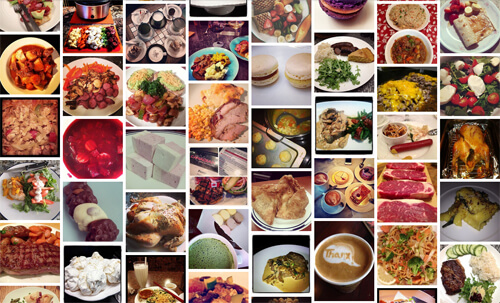 A collage of Edmonton gastroposts shared in the past few weeks. Photo supplied.

Le Blanc says so far there’s been a great response to Gastropost here in Edmonton.

There are nearly 1,000 members and hundreds of photos being shared each week.

“I absolutely do think that there is an appetite for Gastropost here in the city. I think we’ve seen in the past five or six years, our culinary landscape has changed so much. We’ve got so many amazing restaurants opening and chefs really hanging their shingles in different places and they have this following now. People are caring more and more about what they eat, where it’s from, who they’re supporting with it,” Le Blanc says.

“I think Edmonton is a great community of people who love food.”

Nationally, there are nearly 11,000 members.

Le Blanc stresses that Gastropost isn’t just for foodies or food bloggers – rather, everyone can get involved with the project because everyone finds common ground in food.

“Everybody eats,” she says. “Even if you have nothing else in common with someone, you have food in common.”

Le Blanc has high hopes for what the future of Gastropost will look like in Edmonton and across the province.

There will be Gastropost food events and advisory boards are being established in Edmonton and Calgary, so Le Blanc can get input from various food lovers on how to grow and make the project even better.

More than anything, Le Blanc says she hopes more and more people will participate.

“I would like to see everyone in the city gastroposting,” Le Blanc says. “That would mean everyone is eating something great every day and telling people about it and connecting with others.”

Linda Hoang is a Canadian blogger based in Edmonton, Alberta, who writes about travel, food, lifestyle and pet topics. She's also a seasoned social media/digital strategist with a journalism background, the founder of the Edmonton International Cat Festival and co-founder of Stop Race Based Hate, an online anti-racism education tool. Linda loves exploring the world with her partner Mike, eating their way through cities, supporting local businesses, and photographing Instagrammable Walls. Linda is a fur-mom to two cats and two dogs.
PrevPreviousReview: Japonais Bistro
NextGiveaway: Tickets to Disney’s Saving Mr. Banks!Next