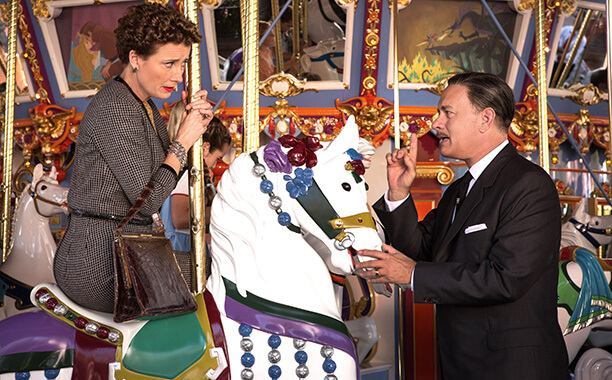 Great news everyone! I’ve been given 10 double guest passes to give away for the advanced screening of Disney’s new movie Saving Mr. Banks!

The screening is on Thursday, Dec. 5 at 7 p.m. at Cineplex Windermere.

Movie synopsis: When Walt Disney’s daughters begged him to make a movie of their favorite book, P.L. Travers’ “Mary Poppins,” he made them a promise—one that he didn’t realize would take 20 years to keep. In his quest to obtain the rights, Walt comes up against a curmudgeonly, uncompromising writer who has absolutely no intention of letting her beloved magical nanny get mauled by the Hollywood machine. But, as the books stop selling and money grows short, Travers reluctantly agrees to go to Los Angeles to hear Disney’s plans for the adaptation. For those two short weeks in 1961, Walt Disney pulls out all the stops. Armed with imaginative storyboards and chirpy songs from the talented Sherman brothers, Walt launches an all-out onslaught on P.L. Travers, but the prickly author doesn’t budge. He soon begins to watch helplessly as Travers becomes increasingly immovable and the rights begin to move further away from his grasp. It is only when he reaches into his own childhood that Walt discovers the truth about the ghosts that haunt her, and together they set Mary Poppins free to ultimately make one of the most endearing films in cinematic history.
​
How to win your way into the advanced screening of Disney’s Mr. Banks!

* note: Arrive early. Seating is first come, first served. The ticket does not guarantee you a seat.

Leave a comment below telling me what your favourite Disney movie is!

You can also get your name entered into the mix a second time (this is highly recommended) by tweeting out this sentence:

(This only gets you an additional entry IF you have left a comment answering the above question. You must comment to qualify! Note: Comments need to be moderated unless you’ve left a comment before. If you don’t see your comment show up right away, don’t fret!)

The contest will close on Monday, December 2 at 4 p.m.

Congratulations to Steph, Peggy, Alan, Heather, Matthew, Gloria, Kassie, Michelle, Sarah and Tammy for winning these tickets!! Thanks to all who entered.

Linda Hoang is a Canadian blogger based in Edmonton, Alberta, who writes about travel, food lifestyle and pet topics. She's also a seasoned social media/digital strategist with a journalism background. Linda loves exploring the world with her husband Mike, eating their way through cities, supporting local businesses, and photographing Instagrammable Walls. She is the founder of the Edmonton International Cat Festival and a fur-mom to two cats and two dogs.
PrevPreviousSocial Media Spotlight: Gastropost Edmonton connects food lovers, cares about what you ate for dinner
NextAlberta Primetime: Pop Culture Panel (Nov. 28, 2013)Next