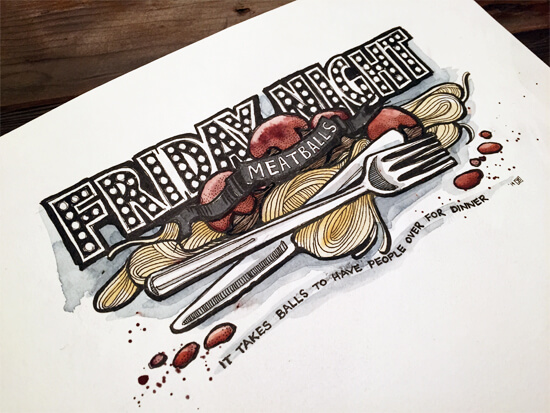 An Edmonton man is redefining the dinner party, inviting not only friends – but strangers as well into his home for what he’s calling Friday Night Meatballs.

Chris Falconer describes himself as a baker, a butcher, a yogi, a cyclist. But for dozens of Edmontonians, he’s all of that and more – he’s also a community builder.

The 34-year-old man has spent every Friday since November inviting friends – and strangers – into his home to connect over a plate of meatballs and pasta.

Falconer says the weekly dinner party is all about community.

“It allows me, and those in attendance, to get back to the basics of connecting, asking questions, challenging ideas, listening to other perspectives,” Falconer says.

“My favourite part of Friday Night Meatballs is that I get to connect with my community. With people I know really well, with people I only know in passing, or with people I’ve never met.” 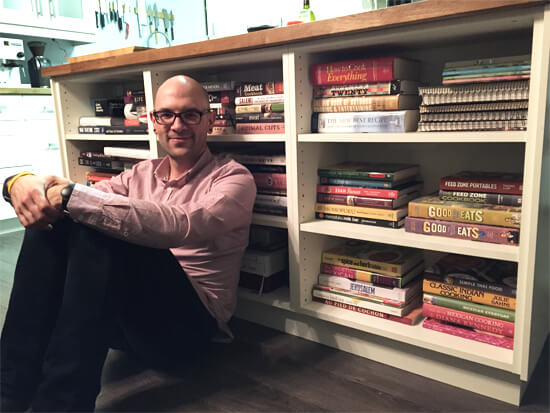 Here’s how it works:

Falconer whips up a giant bowl of hearty, homemade meatballs using a combination of beef, pine nuts, raisins, and from-scratch bread crumbs. He pairs the meatballs with a giant bowl of sometimes home-made, sometimes store-bought pasta. And he waits to see who shows up at his south Edmonton home.

There’s usually one or two people at the dinner who know Falconer directly but oftentimes the majority of the 8-10 people who can fit around his wooden table made from a reclaimed Vietnamese boat, are strangers – friends of friends. What they all have in common? Intrigue over an evening meeting new people and connecting over damn good food.

The idea is inspired by an “overworked and stressed out” couple in the U.S., who created Friday Night Meatballs as a way to reconnect with friends and neighbours. The response Sarah and Joe from Philadelphia got overwhelmed them. Their Friday Night Meatballs became a place where friends, neighbours, relatives, clients, online friends who wanted to hang out in real life, and more – could come together to eat, relax, and build community.

At Falconer’s Friday Night Meatballs last week, the dining group was made up of nurses, a plumber, a communications specialist, urban planner, entrepreneur, graphic designer and a couple in human resources. Strangers who immediately bonded. 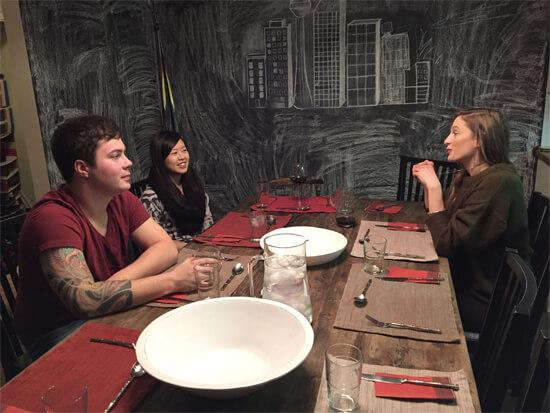 “I really felt that I was being included in the community being built around the table,” said Friday Night Meatballs attendee Andrea Chan.

“Catching up with familiar faces and connecting with complete strangers over a plate of pasta and meatballs was a fun experience and one that I will always remember. It made me realize how kind Edmontonians really are, and just how tight knit our city is.” 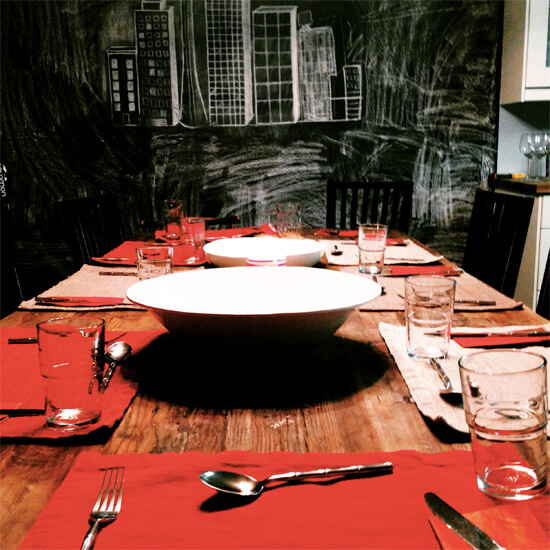 Laura Lynn Johnston had a similar experience. She was invited to attend Friday Night Meatballs – even as a Vegan who knew she couldn’t eat any of the beef meatballs. That was fine for her, because the biggest appeal of the night was being surrounded by good company.

“It was the best Friday night in long while,” Johnston said. “It exceeded all expectations.” 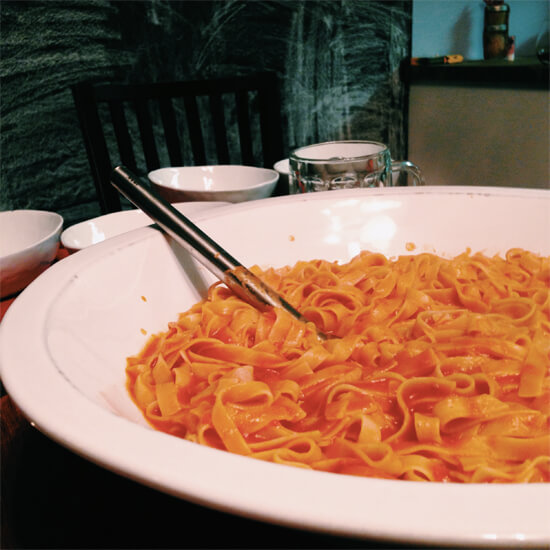 A whole lot of pasta at Friday Night Meatballs.

Each week, Falconer gets the same reviews.

“People have been enthusiastic about the evenings, with most people asking to attend again. It’s heart warming,” he says.

So where do the people come from? 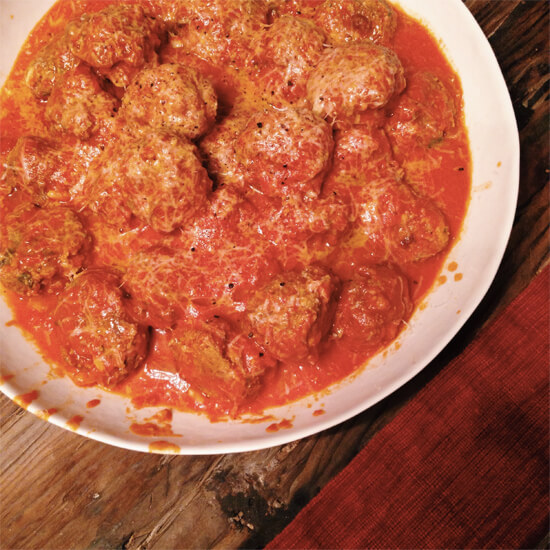 Falconer started sharing photos of the meatballs he was creating long before the dinners officially began. He made more than 100 meatballs before perfecting the recipe he currently uses. During the holidays, he switched it up by making turkey cranberry meatballs, but since the new year, he’s back to beef.

As he shared photos of his cooking efforts, and teasers about Friday Night Meatballs, more people on social media started to ask if they could come over.

“I would be remiss if I didn’t say that some people have shared a bit of nervousness about the meal; who will be there, what’s it like, is it awkward. I think it’s normal to expect a bit of that, but it’s just another reminder that as we embrace social media with an ever-growing appetite, we still need to take a chance and sit face to face with strangers,” he says. 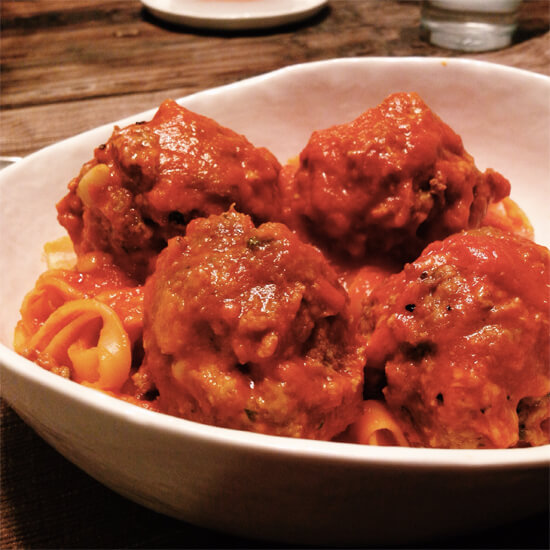 As word spreads – as it has, through various social networks – Falconer plans on capturing photos of guests, documenting what they do, creating a book and sharing it through a Friday Night Meatballs Tumblr blog, to take the connections being made at dinner even further online.

Call it a hyper-local six degrees of separation.

“I’ve had students, baristas, lawyers, media, professors, bankers, plumbers, photographers, city planners and so on, attend. Maybe someone needs a wedding photographer and two weeks before, one of the attendees was just that. Every week, the group gets updated and people are only one degree away from a new connection that can potentially help or inspire them.” 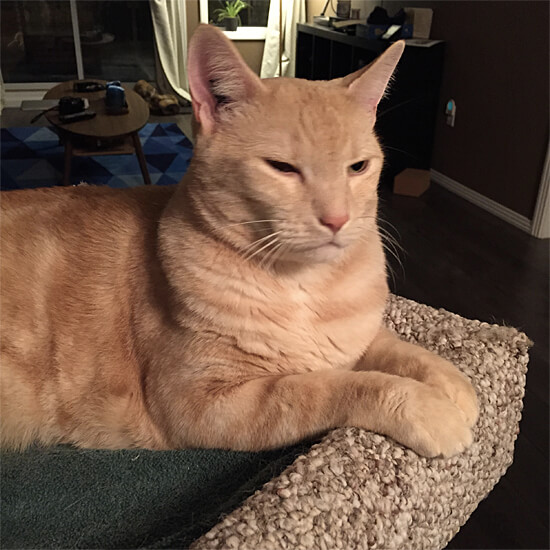 At Friday Night Meatballs you get the pleasure of meeting Peter, Falconer’s cat.

Falconer doesn’t see his weekly dinner party slowing anytime soon. He’s met and continues to meet exceptional guests, is piquing even more interest through social media, and honestly just looks forward to each Friday – hoping that soon, others will as well. 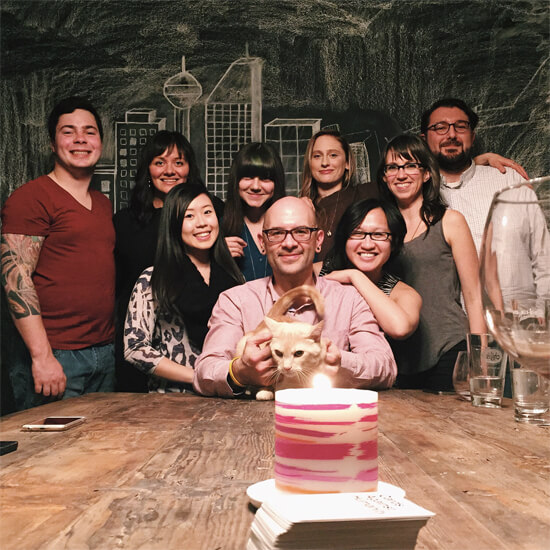 Linda Hoang is a Canadian blogger based in Edmonton, Alberta, who writes about travel, food, lifestyle and pet topics. She's also a seasoned social media/digital strategist with a journalism background, the founder of the Edmonton International Cat Festival and co-founder of Stop Race Based Hate, an online anti-racism education tool. Linda loves exploring the world with her partner Mike, eating their way through cities, supporting local businesses, and photographing Instagrammable Walls. Linda is a fur-mom to two cats and two dogs.
PrevPreviousSocial Media Notes (#56) – Links for the Week of January 4 – 11
NextReview: Gui Lin Noodle House (Edmonton Chinatown Series)Next