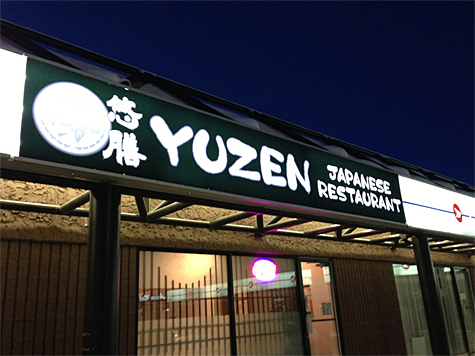 I recently had the pleasure of trying out Yuzen Japanese Restaurant at 1 Hebert Road in St. Albert! Mike’s sister Amanda and her boyfriend George live in St. Albert so we’ve driven past Yuzen a few times over the last few months. A couple Sundays ago we were in the area and wanted to go for a late lunch but found out Yuzen is only open for dinner on Sundays! After throwing out other restaurant options, we kept coming back to Yuzen so decided to suck it up and wait until 5 p.m. for it to open. 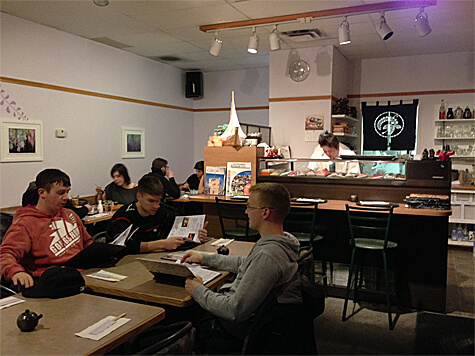 Yuzen is very small restaurant. I believe we counted less than 50 seats. But it gives off a very cozy, intimate feeling and it felt very Japanese – what with the Japanese music playing in the background and the pretty paintings on the wall depicting Japanese/Asian scenes. As far as pricing goes, it’s about what you’d expect for dinner for a Japanese restaurant (I’d be interested in trying them at lunch to see the differences in prices). 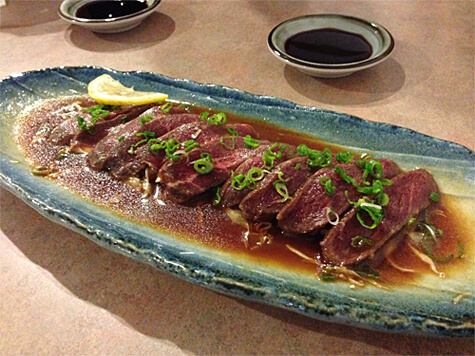 We started off with Beef (Gyu) Tataki which is seared beef sashimi with ponzu butter sauce. ($9.50) The sauce was absolutely delightful and George and Amanda had never tried beef tataki before so they looooved it. I thought it was good but I’ve definitely had better beef tataki. These pieces were a bit thicker sliced than I’m used to. 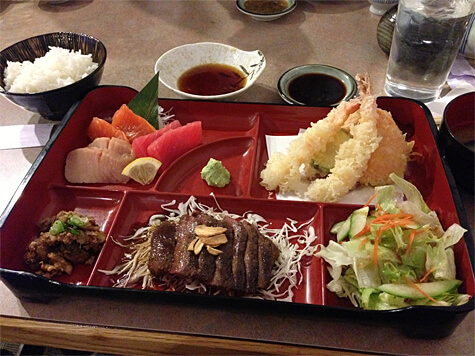 I ordered the Makunouchi Matsu Bento Box – which featured ‘Japanese-style beef steak,’ tempura, sashimi, salad, sunomono salad, rice and ‘chef’s extra’ ($25). The chef’s extra ended up being a miso eggplant and ground chicken mixture. Again, this was not the best bento I’ve had. The beef steak wasn’t too great (I would say again, it was very thick). The miso eggplant wasn’t too appealing, the salads were fine and the miso soup was okay (I’ve had better). The tempura and sashimi were very tasty! Also you can’t go wrong with rice (typically). 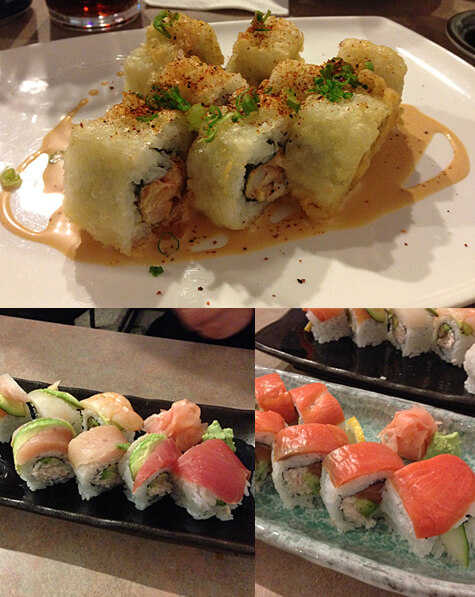 George and Amanda went with rolls for their meal (Mike and I aren’t as into rolls but we did share the Crispy Cajun rolls with them). The Crispy Cajun Rolls were Cajun shrimp maki buttered and deep fried ($9). They were reeeeallly good. Instant favourite. The sauce was delicious. We didn’t try the Rainbow Rolls ($12) or Alaskan Rolls ($11) but George and Amanda ate them all up and said they loved it! They had just had similar rolls at Mikado the night before and said they preferred Yuzen’s. 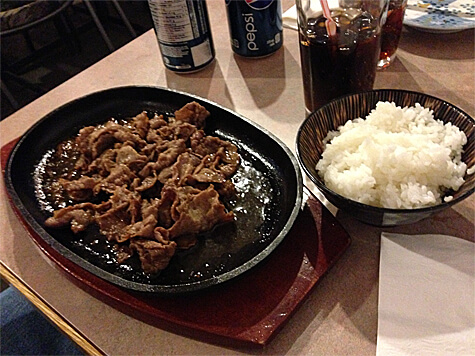 Mike ordered his usual – whatever form of beef and rice there was – which at Yuzen came in the form of a Beef Yakiniku – stir-fried beef and onions with a sweet, savoury sauce, served with pan-fried vegetables and rice ($17). (He got it sans-vegetables. He’s bad!) He ate it all up – and said it was good but not the best beef/rice dish compared to others he’s had. 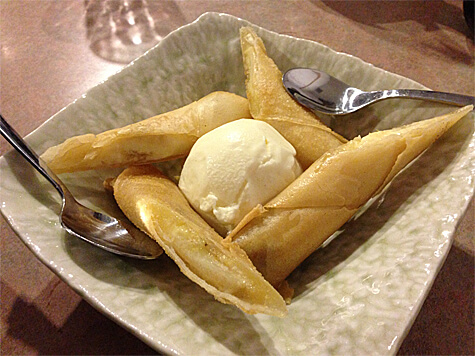 And for dessert we all shared a Banana Roll – which is basically deep-fried banans with ice cream ($13). It was REALLY good. Normally I’m not a dessert fan but Mike had to bat my spoon away to keep me from eating it all up it was so yummy. The crunch of the deep fried outer layer combined with the sweetness of the banana and the cold punch of the ice cream all worked really well together! 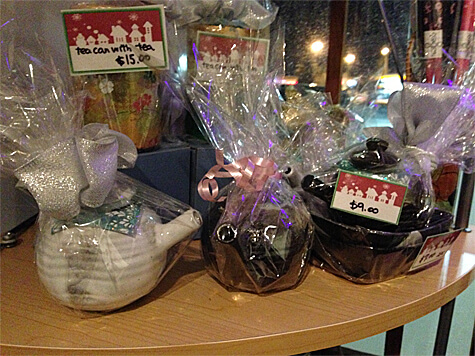 Cute little soya sauce holders and other wares for sale at Yuzen.

Yuzen is also interesting because it sells some of the plates/tea pots/wares that you’re served with! They have these really adorable miniature soya sauce holders and teapots that are actually quite affordable. I foresee purchasing some of these in the future!

Overall we quite enjoyed our meal at Yuzen – but we’ve had better. I’ll say the atmosphere was great, the service was great (and prompt), and the food was good. Mike and I both believe we’ve had better beef/rice dishes and better bento boxes at other Edmonton and area Japanese restaurants (Mikado, Kyoto, Kobe, Mt. Fuji, etc.) The prices are also on par with those other restaurants (except Mt. Fuji, Mt. Fuji is the most affordable for a really delicious meal, and I STILL haven’t blogged about it yet!) Yuzen will likely become a popular spot for George and Amanda – since it’s right in their backyard and their rolls were really good. Whether Mike and I will be back is a bit more questionable but I would recommend you try if you’re into Japanese and want a new, local place to try. I also have a friend who swears that Yuzen’s ramen is the best in the Edmonton area.

So have you been to Yuzen?? What did you think?!