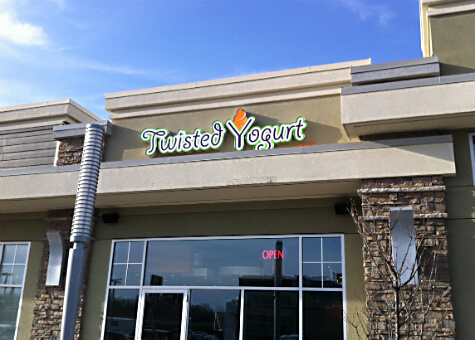 This week Mike and I went to Twisted Yogurt in Spruce Grove’s new Century Crossing outdoor shopping centre (#204, 131 Century Crossing Road). We’d been to Twisted Yogurt’s Calgary Trail Edmonton location a couple times before and I had always meant to do up a review but never got around to it. We live on the very west end of Edmonton so going to Spruce Grove takes us about the same time that it would to drive to West Edmonton mall (10 ish minutes). When I saw that Twisted Yogurt was one of the newly opened shops in Spruce Grove’s newest shopping area, I had to make a point of going! (More on all the slick new shops in this area later). 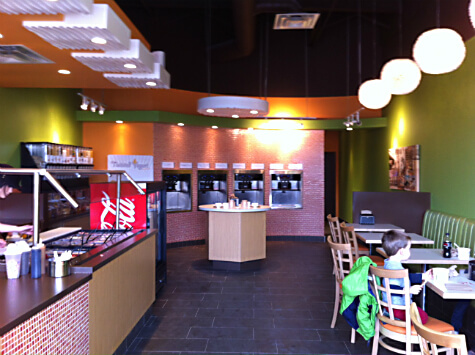 It looks basically identical to the Calgary Trail location with neat lights, colourfully-painted orange and green walls and your yogurt serving area on the back wall. 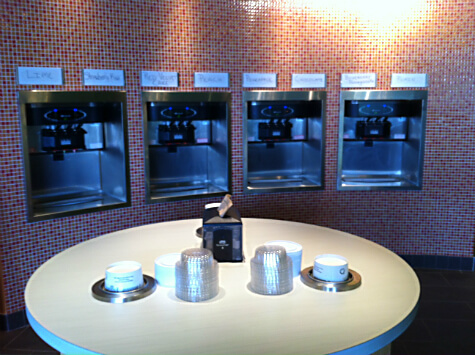 There are two cup sizes (I think there are three at the Calgary Trail location) and I think the small size is more than enough! 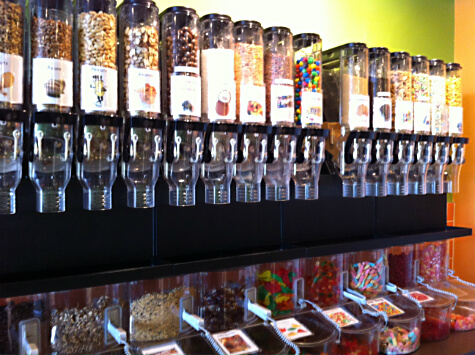 There’s a chocolate, candy, cereal toppings area which is always fun to look at. I’ve never actually added any of the coke bottles, gummy worms, crushed skores or butterfingers to my frogurt creations before (I can’t imagine the combination would taste very good but I also don’t have much of a sweet tooth). Mike always heads for that area though! 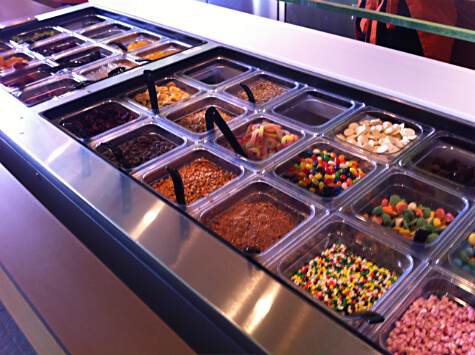 There’s even more candy toppings you can add by the till, which I also typically ignore. 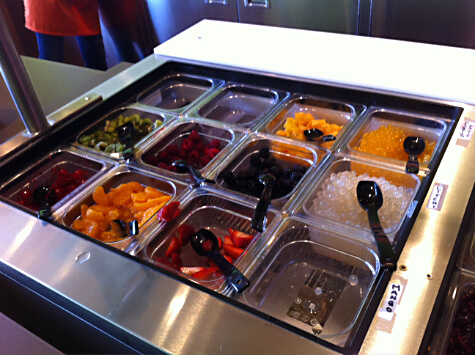 Then there’s the fruit section, my favourite! I always add kiwi and strawberry pieces to my creation. There’s also raspberries, mango, kiwi, pomegranate, blackberries, watermelon, pineapple and then whatever else depending on the season. I also LOVE their lychee (“litchi”) mini popping balls. 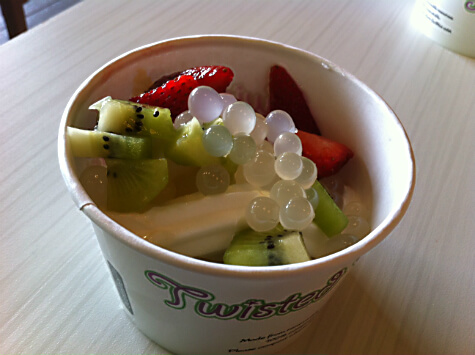 The above is my frozen yogurt creation with as I said my favourite kiwi and strawberry pieces plus the popping balls. The balls are just these tiny balls that literally burst fruit flavour in your mouth. Tastes great (I’m a huge fan of lychee flavour) and is like a party in your mouth. Seriously! 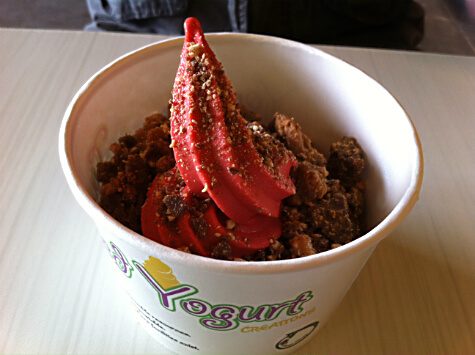 Mike’s Twisted Yogurt creations are always more unusual than mine. Last time he got a Coke flavoured yogurt base with gummies and other random candies (he didn’t like it). This time he got the Red Velvet yogurt with Snickers and peanut butter pieces. He liked it more than the Coke creation but still didn’t love it. In fact Mike’s never really liked enjoyed of the times we’ve gone to Twisted Yogurt. I blame him though – it’s about what you mix and if you’re going to be mixing things that naturally don’t belong, it’s not going to taste great. But I guess that’s also part of the fun! Mixing and adding toppings and flavours that may or may not go well together! ;) 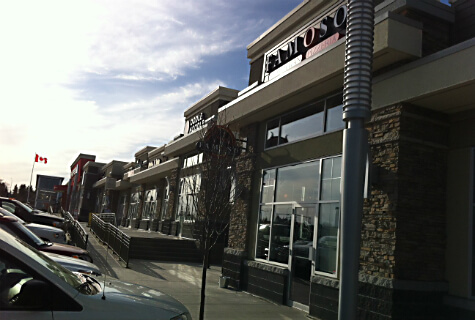 Twisted Yogurt is a great addition to Spruce Grove’s Century Crossing. They’ve also recently added a Famoso, an Oodle Noodle, and a Booster Juice. There’s a new Winners, Save-on-Foods and Shoppers Drug Mart and there’s another section of buildings that still have yet to reveal what shop it will end up being. It’s a very slick-looking area with a very clean promenade and behind all of the new stores is a cheap movie theatre! It all makes for a great new spot to spend an afternoon.

For west-end Edmontonians it should definitely be considered for date night ventures.

I always have a nice time going to Twisted Yogurt. I’ve tried a few different frogurt places in the U.S. and Twisted Yogurt’s pretty much on par. (Haven’t tried any other froyo places in Edmonton yet though so I’m not sure how it compares, although honestly I don’t see how people can really go wrong with any yogurt plus fruit combination dessert). The cost of your creation depends on how much it weighs. It costs about 49 cents an ounce. Both mine and Mike’s together came out to about $10 so it’s a pretty cheap treat.

Have you been to Twisted Yogurt? What did you think??

Linda Hoang is a Canadian blogger based in Edmonton, Alberta, who writes about travel, food lifestyle and pet topics. She's also a seasoned social media/digital strategist with a journalism background. Linda loves exploring the world with her husband Mike, eating their way through cities, supporting local businesses, and photographing Instagrammable Walls. She is the founder of the Edmonton International Cat Festival and a fur-mom to two cats and two dogs.
PrevPreviousClicks of the Day: Wednesday, April 11, 2012 Edition!
NextClicks of the Day: Thursday, April 12, 2012 Edition!Next