“Alberta’s three opposition leaders took turns piling on the premier in the only televised leaders debate of the hotly contested provincial election campaign. They challenged Progressive Conservative Leader Alison Redford on her government’s deficit budgeting, the alleged bullying of doctors and a legislature committee where members were paid for not meeting. Redford spent the night fending off the shots while trying to land a few of her own.”

“PC Leader Alison Redford, Wildrose Leader Danielle Smith, NDP Leader Brian Mason and Liberal Leader Raj Sherman faced questions and challenged each other on a variety of issues, including the no-meet committee, the Wildrose promise of an energy dividend, health care, education and much more. Edmonton-based political blogger Dave Cournoyer found it harder to declare a winner, although he agreed that first-timer Smith did well.”

Did the debate change your mind? Confirm your choice? Make you even more undecided?

“After enduring weeks of criticism over robocalls, the F-35 and the budget, the federal Conservative party is virtually tied with the NDP in public opinion, suggests a new Ipsos-Reid poll conducted exclusively for Postmedia News and Global TV. But the controversies haven’t stuck to Prime Minister Stephen Harper, who continues to enjoy strong approval ratings throughout most of the country.”

“Canadians dug themselves even deeper in debt in the first part of 2012, despite repeated warnings of the danger that carries. A consumer credit report released Thursday by Equifax Canada showed that Canadians pushed their non-mortgage debt 3.4 per cent higher in the first quarter than a year earlier.”

“Canadians reported fewer hate crimes to police in 2010, Statistics Canada reported Thursday. But while the number of reported hate crimes appears to be down, some of the the report’s findings still concern activists and academics. (But) the decline might not represent a trend.”

Sad that racism is still so real. Hope hate crimes continue to decline.

“Ontario is hanging up on “price gouging” by mobile phone companies with legislation that would cap the costs of cancelling service, provide up-front pricing details and plain-language contracts. The law from Consumer Minister Margarett Best incorporates two previous private member’s bills by Liberal MPP David Orazietti in an effort to ease “cell shock” when customers open their invoices.”

Would be nice to make this country-wide, lol.

“North Korea defied international warnings of censure and further isolation on Friday, launching a rocket that the United States and its allies called a provocative pretext for developing an intercontinental ballistic missile that might one day carry a nuclear warhead. But in what was a major embarrassment to the North and its young new leader, the rocket disintegrated moments after the launching, and American and Japanese officials said its remnants fell harmlessly into the sea.”

End of the world…

“Our population is aging, and age-related diseases such as dementia are on the rise. According to a WHO report, the worldwide incidence of dementia is expected to double by 2030 to 65.7 million and triple by 2050 to 115.4 million.

“Meet the Pinterest bride. For her, planning a fairy-tale wedding without the tool is, well, inconceivable. Indeed, Smith estimates that 90% of her rustic mountain event will be inspired by or pulled directly from Pinterest, as she wishes. With its heavily female demographic and emphasis on DIY derring-do, Pinterest and brides go together like love and marriage. But it’s not just the women in white who are touchscreen-tapping into the power of the 2-year-old site. “It’s changing the industry” for vendors, planners and magazines, says Anne Fulenwider, editor in chief of Brides.”

“‘Despite PC vendors and phone manufacturers wanting a piece of the pie and launching themselves into the media tablet market, so far, we have seen very limited success outside of Apple with its iPad,’ said Carolina Milanesi, research vice president at Gartner. ‘As vendors struggled to compete on price and differentiate enough on either the hardware or ecosystem, inventories were built and only 60 million units actually reached the hands of consumers across the world. The situation has not improved in early 2012, when the arrival of the new iPad has reset the benchmark for the product to beat.'”

“There can’t be many Internet users who haven’t heard of social network site Facebook. But worryingly, it’s not just our friends who are keeping up with what we’re doing online. Debt collectors, potential employers and even lawyers could be finding out much more than you’d want them to. Here are some of the worrying trends developing on the site and how you can take steps to avoid being spied on.”

“What if kids with special needs had their own robot to work with them every day in school, guiding them toward long-term educational goals that develop not only their cognitive and social skills but also healthy habits such as exercise? Maja Mataric, co-principal investigator who serves as the vice dean for research and professor at the USC Viterbi School of Engineering, wants to endow robots with the ability to help people with special needs. A team of 17 principal investigators from Yale, Stanford, MIT, and the University of Southern California think that with their expertise in computer science, robotics, educational theory, and development psychology, they can do just that.”

Very cool. (Sadly, until the robots become aware and turn on humans).

“A new study from BRANDfog (via eMarketer) might explain why employees are up in arms over (inflated?) reports that hiring managers are asking for Facebook credentials. It seems that it could boil down to a complete lack of trust in any company executive that doesn’t “get” social media. According to employees surveyed, 82% of them have more trust in a CEO that engages in social media.”

It’s always good when the person leading you understand what’s up.

“Welcome to the future of work: a world where everything moves faster, the hours are longer and steady jobs are harder to find. Work has always been central to our lives… but now, technology and the pressure of competing in a global economy is threatening to turn back the clock, making our toil an all-consuming affair once again. Studies show that we’re more productive than ever. But even as our careers give us a sense of purpose and belonging, research shows they’re also driving us toward some pretty self-destructive behavior, raising the question: Are our jobs killing us? By committing to a lifetime of labor, much of it sedentary, are we inadvertently exposing ourselves to a kind of stress our bodies weren’t designed for? Research suggests that in general, the more we work, the worse our bodies fare. But how far does that wisdom go?”

“After getting slapped with an antitrust lawsuit, publishing houses Simon & Schuster, Harper Collins and Hachette have agreed to compensate people who bought ebooks from Apple’s iBookstore at elevated prices. The publishers said they will “use a formula based on the number of states participating and the number of eBooks sold in each state” to determine amounts due, but did not specify how consumers will be reimbursed — by check, a discount on future purchases, or some other mechanism. Details are to be finalized in the coming weeks.”

“The average Manhattan apartment commanded $3,418 in monthly rent in March, according to a first-quarter report to be released on Thursday by brokerage Citi Habitats, That is the highest rate since the firm began tracking such data in early 2002—topping the previous record of $3,394.”

I can’t even imagine living with that rent for an apartment.

“A “news mob” of Orange County Register reporters will descend on Angels Stadium for opening day… So what exactly does an Angels news mob cover?

A real estate reporter is doing a story about how property values around Angel Stadium have gone up. A business reporter talked to the manufacturer of Angels bobbleheads. A technology reporter interviewed the person who picks the songs and video clips that run during the game. The person who usually covers celebrity gossip filed a story about the 1870s-era baseball cards that are in a Library of Congress collection. One reporter is writing a story about an Angels fan who plans to propose to his girlfriend at the opening-night game. Reporters are being encouraged to find stories that aren’t regularly on their beats, to take stylistic risks that normally wouldn’t fly, and generally to get outside of their comfort zones.”

“A new paper published in the International journal of Aeronautical and Space Sciences concluded that there is life on Mars, based on old data from the 1976 Viking Mission to Mars. Three experiments looked for life on Mars, but only one—the Label Release experiment—found evidence. The Label Release tests found signs of CO2, a gas emitted by all living organisms, in the soil. For years, scientists largely ignored the data and concluded that they were signs of geological formation, not biological. But a group of mathematicians and neurobiologists had a different idea. Since biological organisms are more mathematically complex than non-living matter, the samples that showed evidence of biological life should be more complex than a control (non-living) sample. They were right.”

We come in peace, martians!

“Today, Little Brown announced the title of JK Rowling’s upcoming adult novel: “The Casual Vacancy.” In the novel, the unexpected death of Barry Fairweather leaves Pagford, the small town he lived in, in shock. Pagford appears to be a peaceful, serene town, but underneath that, it is a town at war. Fairweather’s death leaves an empty seat on the parish council, and this causes the biggest fight Pagford has ever seen.”

I’m not utterly intrigued by the synopsis but will likely be reading and sure I’ll become attached!

“These photos was taken by Fr. Browne, an Irishman of the Jesuit order who survived the disaster. The pictures are now digitally remastered so life aboard the Titanic can be shared with the world.”

“The villages around the Indian town of Dharmapuri are in the midst of an unusual problem. Unsubstantiated reports of vampires draining cattle have frightened entire communities such that residents are staying off the streets after sunset. To quell the spread of this unmitigated bullpucky, local politicians have placed a price on these nonexistent vampires’ heads. Evidence of a re-dead vampire (or a Ratha Kaatteri) nets an amateur Van Helsing 1 lakh of rupees, or a smidge under $2000.”

Loki Photo of the Day: 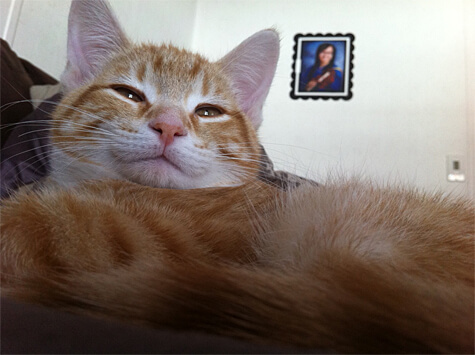 Linda Hoang is a Canadian blogger based in Edmonton, Alberta, who writes about travel, food, lifestyle and pet topics. She's also a seasoned social media/digital strategist with a journalism background, the founder of the Edmonton International Cat Festival and co-founder of Stop Race Based Hate, an online anti-racism education tool. Linda loves exploring the world with her partner Mike, eating their way through cities, supporting local businesses, and photographing Instagrammable Walls. Linda is a fur-mom to two cats and two dogs.
PrevPreviousReview: Twisted Yogurt
NextClicks of the Day: April 13, 14, 15 2012 Weekend Edition!Next