Review: Top of the World Restaurant at the Stratosphere (Las Vegas)

On our last night in Las Vegas, Mike and I went to the Top of the World restaurant at the Stratosphere hotel. Top of the World is more than 800 feet above the Las Vegas Strip. The restaurant revolves 360 degrees every hour and 20 minutes. It’s fancy, finer dining, and has a price point that Mike and I would generally avoid. But since we were on vacation and the restaurant is so unique, we put the $$$$ price point behind us (or below us, ha ha) and took the elevator up!

The elevator goes up at 20 miles an hour (clears three floors per second) and there’s an attendant in each elevator. (Their shift is literally eight hours in an elevator, greeting people coming in and out!)

The view is stunning. It really is a once-in-a-lifetime experience (well, except for people who work there I suppose! ;)) We purposely made our reservation at night so that we could see all of the twinkly Las Vegas lights. 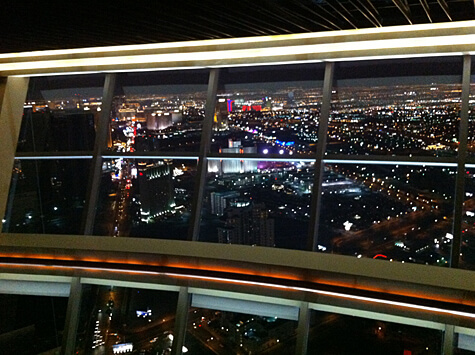 View from the Top of the World Restaurant at the Stratosphere in Las Vegas!

The average cost of a dish is around $45 and that doesn’t include a side dish. Side dishes are $10 each. We started with a complimentary bread basket that came with three different butters (plain, pesto and orange). 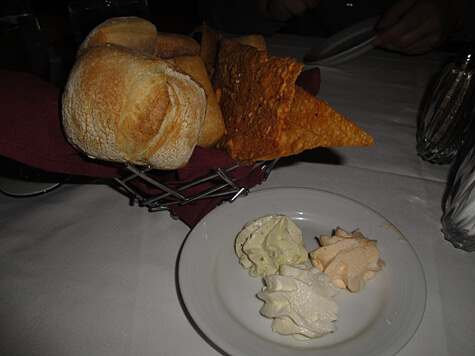 All the breads were very good as was the plain and pesto butter. The orange butter was a bit too sweet for our liking. There was also some kind of cracker/chip piece that was delicious! Of course I am partial to chip-like foods because I looooove chips, lol.

Mike ordered the “Midwestern Free Range Chicken Breast filled with Three Cheese Fondue” with balsamic essence, fingerling potatoes, oven-roasted tomatoes and natural jus. ($44). He said his chicken was really juicy but there was too much cheese in some parts. He liked it, but has definitely had better (certainly for less than $44). I tried it and it was tasty but I’m not a fan of the balsamic essence. 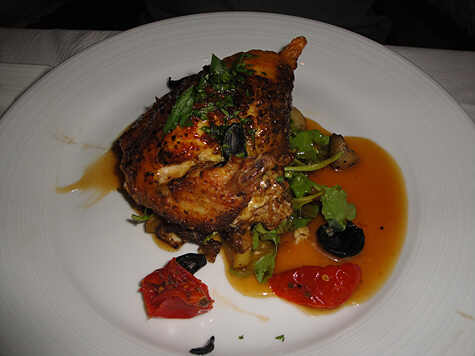 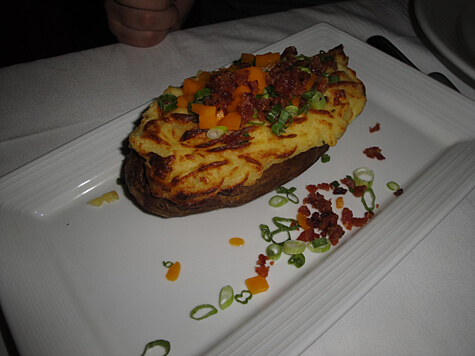 I ordered the “Roasted Iowa Pork Tenderloin with Apple and Cranberry Chutney” (bacon-wrapped tenderloin, yam puree, demi-glace with palm vinegar, $44). The “bacon-wrapped” part really caught my eye in the menu. I thought the pork itself wasn’t anything special and actually at some parts was kind of dry but the bacon and puree really helped boost the yum factor. 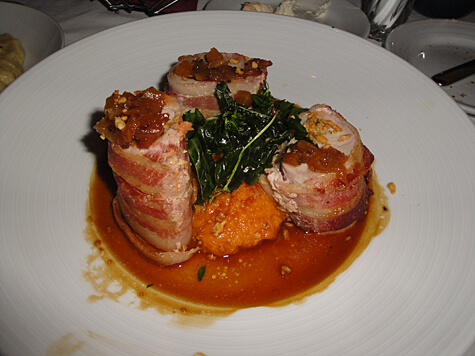 My chosen side dish was the “Yukon Gold Mashed Potatoes” ($10) and really, who has any complaints about mashed potatoes? Good as taters can be (but like Mike, I thought it should have been included with the $44 main entree). 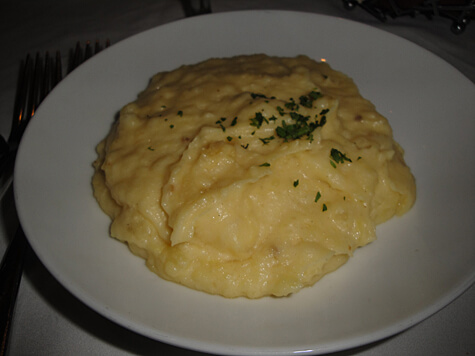 Mike is afraid of heights so he was very aware throughout the night that we were that high in the air. I didn’t think that was a problem at all but the restaurant definitely revolved at a faster, more noticeable pace than I could handle. My head got pretty dizzy throughout the night so that wasn’t too fun. Still you put that stuff aside when you think about where you are, how great the view is, and how neat it is that there are skydivers falling past our window throughout the evening! 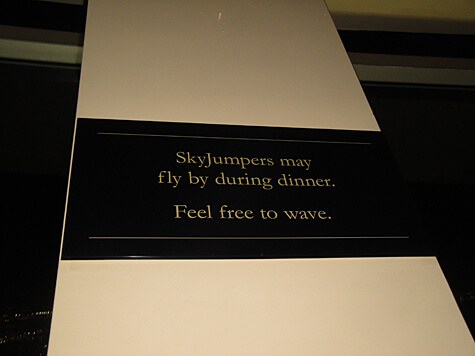 Funny sign at the Top of the World Restaurant 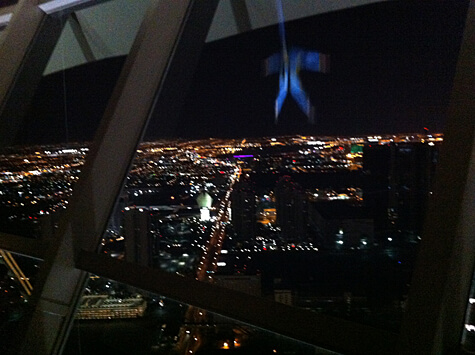 Skydiver falling out our window at the Top of the World Restaurant!

There was a professional photographer who went around the tables taking pictures and then at the end of the night offering up printed copies for us to purchase. You kind of feel obligated to buy it because they literally print out all of the photos and have some of them already put into frames. We bought two photos that comes in a frame for $44. Definitely steep and normally we’d never buy something like that because we are quite frugal but once again the fact that we were on vacation took over. 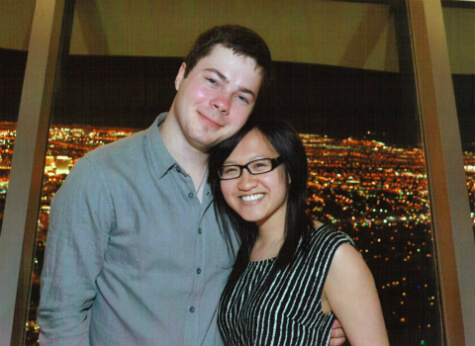 A professional photographer took our photo at the Top of the World Restaurant in Las Vegas!

It was a really nice keepsake to be able to take home with us!

Overall I would say the food is nothing special. It looks great but tastes average and is definitely pricey, but I’d absolutely recommend going to Top of the World restaurant for the experience alone. Great service, amazing view, and something we’ve been talking up to our friends and family ever since we got back. It was something different that no other friend of ours whose gone to Vegas has yet to try. Dining at the ‘top of the world’ made for a great night out. It was very romantic and I think everyone should give it a try when they’re in Vegas! :)

I will also say despite the food not being spectacular, I was very pleased that the portions were big! I love big portions and one of my biggest pet peeves about going to a restaurant (especially if it’s an expensive restaurant) is if the portions are TEENY and I’m still hungry afterwards! Pleased to announce that Top of the World’s portions left my tummy fully satisfied. 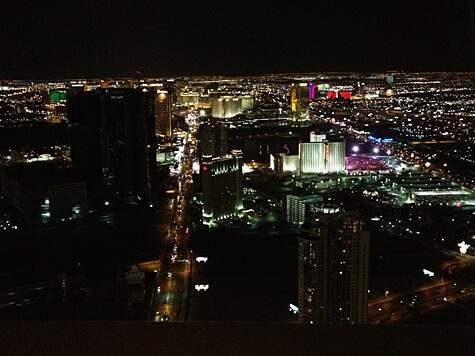 So have you been to the Top of the World Restaurant? What did you think?

Linda Hoang is a Canadian blogger based in Edmonton, Alberta, who writes about travel, food, lifestyle and pet topics. She's also a seasoned social media/digital strategist with a journalism background, the founder of the Edmonton International Cat Festival and co-founder of Stop Race Based Hate, an online anti-racism education tool. Linda loves exploring the world with her partner Mike, eating their way through cities, supporting local businesses, and photographing Instagrammable Walls. Linda is a fur-mom to two cats and two dogs.
PrevPreviousPhoto of the Day: Wednesday, May 2, 2012
NextClicks of the Day: Wednesday, May 2, 2012 Edition!Next