“Alberta’s provincial politicians should be paid $134,000 a year, plus up to $67,000 more when they take on extra responsibilities, says an independent salary review released Wednesday… Major also advised the government to scrap the gold-plated transition allowances that cost taxpayers more than $15 million this year, and said the province should discontinue the roughly $11,000 in RRSP money MLAs are given each year.”

“A five-year fight for cleaner air finally ended Wednesday when city council passed Edmonton’s first anti-idling bylaw. The new rule only bans drivers from running engines excessively outside schools and hospitals, not across the city, but Coun. Don Iveson said it will give kids a way to push adults to change their behaviour.”

“A new poll suggests the Conservatives and NDP are in a statistical tie for voter support one year after the federal election.”

Lol. Though we know how wrong polls can be.

“Prime Minister Stephen Harper and Thomas Mulcair, the Leader of the New Democrats, addressed their caucuses on Wednesday morning with speeches crafted to chart the path forward. Mr. Harper was marking the first year of his majority government and Mr. Mulcair was saluting his party’s elevation to the offices of the Official Opposition.”

“Public Safety Minister Vic Toews’ right as a parliamentarian to do his job free from intimidation and threats was violated by a series of online videos, a Commons committee has concluded, but it won’t be Parliament that seeks the identity of the minister’s antagonist. Instead, the RCMP will continue to digitally track the person or people behind the videos, posted by the online hacker community known as Anonymous in the wake of the government’s tabling of its controversial online surveillance bill.”

“Counterfeiters beware: the Bank of Canada has unveiled a new version of the $20 bill that it says is almost impossible to copy… The new paperless, plasticized bills are part of a total currency redesign announced by the country’s central bank in 2011. The new $20 bills will begin circulating in November, joining polymer versions of the redesigned $100 and $50 bills already in use. New versions of the $10 and $5 will follow by the end of 2013.”

“Quebec Finance Minister Raymond Bachand and Parti Quebecois leader Pauline Marois, who rarely agree on anything, both proposed on Wednesday that a new election is the only way to resolve Quebec’s tuition strike, now entering its fourth month.”

“The UN has imposed sanctions on three North Korean state-owned companies in response to Pyongyang’s failed rocket launch last month. The decision to freeze the assets of the firms and ban them from global trade was approved by the UN Security Council’s sanctions committee.”

“Controversial research on a hybrid strain of bird flu that could potentially spread between humans was published on Wednesday in Nature after security restrictions on the work were lifted. Scientists created the virus by merging a mutated strain of bird flu with the “swine flu” virus that sparked a human pandemic in 2009. The hybrid strain spread easily between ferrets – the best proxy that flu researchers have for people – but was not lethal and could be controlled with antiviral drugs and bird flu vaccines.”

We will be responsible for our species demise… lol. Not to be depressing or anything.

“Researchers have found the enzyme responsible for killing-off their cells including their immune system, which could also be inhibited here on Earth to help slow the aging process.”

Cool for use in space, I would question whether or not we should be trying to slow our own aging on Earth. Humans aren’t meant to live forever!

“Although the epidemic of obesity is well-known, the costs are not — and in many cases are significantly greater than estimated even a few years ago. Some examples of obesity’s economic impact: $190 billion in annual medical costs due to obesity, double earlier estimates. $1,850 more per year in medical costs for an overweight person than for someone of healthy weight, among employees at the Mayo Clinic and their adult dependents. $5 billion annually for additional jet fuel needed to fly heavier Americans, compared to fuel needed at 1960 weights.”

“Research linking weight gain and obesity finds that getting more sleep each night may help limit genetic influences on weight. The study raises the tantalizing possibility that people may be able to use sleep to change a genetic predisposition to weight gain. ‘The longer you sleep, the less important genetics become in determining what you weigh,’ explained Dr. Nathaniel Watson, co-director of the University of Washington Sleep Disorders Center. “Does this mean you can sleep yourself thin?’ Watson asked. ‘Probably not. But you can sleep yourself to a point where environmental factors, like diet and activity, are more important in determining your body weight than genetics.'”

Interesting. (I sleep a lot!)

“The rates of preterm births globally are on the rise, a new Canadian-led study has found… ‘Of the 65 countries with reliable trend data for preterm birth rates, all but three countries have shown increases in the last 20 years,’ Dr. Joy Lawn, co-editor of the report, said in a release Wednesday. ‘Preterm births account for almost half of all newborn deaths worldwide and are now the second leading cause of death in children under five, after pneumonia, and six times more than child deaths due to AIDS'”

“In recent years, the military’s top brass have funded some truly bizarre approaches — from neck injections to Reiki — in an effort to treat symptoms of post-traumatic stress afflicting today’s soldiers. Turns out, they could’ve just equipped troops with Game Boys. At least according to one research team out of Oxford University, who claim that Tetris — yes, the ubiquitous, tile-stacking videogame of your youth — can actually prevent PTSD-related flashbacks.”

“A Sophos researcher stirred up the Mac masses this week when he reported that 20 percent of Mac computers carry Windows malware. The good news is that even though Macs are capable of harboring Windows-targeting viruses and Trojans, those machines can’t be harmed by the malware in all but exceptional cases. The bad news, though, is that Mac users can still spread that malware to Windows machines in a number of ways.”

Well at least our Macs can’t be harmed, lol. #whocaresaboutWindows

“After a date, a pitch or a job interview, there’s a good chance you’re going to get Googled. Online reputation manager BrandYourself now helps you figure out who is searching for your name. The startup, which helps individuals control Google results for names through SEO, launched a new feature on Tuesday that shows users where visitors to their BrandYourself profiles work and where they’re located.”

“Amazon today announced that Amazon Studios, the company’s original content arm, will expand its focus from films to original television series. Starting today, anyone is invited to head over to the new Amazon Studios page dedicated to original TV content and submit scripts for children’s and comedy shows to Amazon.”

I didn’t even realize there was an Amazon Studios!

“Your iTunes collection really is a matter of life and death, according to a new report on estate planning by BMO Retirement Institute. Digital assets, alongside caretaking provisions for parents and pets, are named among the top “new frontiers” often overlooked by Canadians when formalizing their final wishes. The report, published Monday, cites the migration of our personal, professional and financial affairs online, the elevated place of pets in families, and longer life expectancy as reasons for the growing importance of these areas.”

How can you overlook your pets?!?!

“Canadian workers are less likely to have access to the Internet at work or have a smartphone — either their own or one provided by their employer — than workers in so-called “developing countries” such as China and India, according to survey results released Wednesday. Surveys done by international staffing firm Randstad found 76 per cent of Canadian workers polled had access to the Internet at work. While that accounts for the vast majority, it was far less than in China and India, which were both at 93 per cent.”

“‘Maybe CNN is just like an emergency room.’ That is what a longtime CNN employee theorized last year, during one of the channel’s predictable defeats in the Nielsen ratings. When elections and explosions happen, people tune in to CNN, the same way they hurry to a hospital when they think they are having a heart attack. But people tend not to linger in either place — a reality that was reaffirmed for CNN this week when Nielsen ratings showed that April was the channel’s lowest-rated month in 10 years.”

Despite low ratings, CNN is set to make $600 million in operating profits this year.

“As if impending extinction wasn’t enough, dinosaurs were also plagued by giant mega-fleas that impaled their soft underbellies and feasted on their blood. The super-fleas, which were around ten times the size of the fleas that bother dogs nowadays had an extra-painful bite because of their huge suckers.”

“Polar bears are capable of swimming vast distances, a potential survival skill needed in an Arctic environment where summer sea ice is vanishing, a study led by the U.S. Geological Survey showed on Tuesday.”

They’ll need it :'( Because we’re destroying their homes. :'(

“To say the lunches she makes are just ‘fun’ is an understatement, they’re inspired edible greatness that use popular children’s characters and a wicked imagination to make healthy vegetables and crustless bread awesome.”

“The instructions are simple: Hold up an old photo in front of the place where it was originally shot, take a picture of the picture, then write a dedication about what the photo means to you. Since the launch of DearPhotograph.com last year, an idea sparked by a snapshot in Kitchener, Ont., has ignited a global phenomenon, setting off a flurry of camera shutters and unleashing a flood of memories among thousands who’ve embraced the nostalgic concept.”

Such an interesting project.

LOL oh my. Great gift idea for my kitties, haha.

Thor & Loki Photo of the Day: 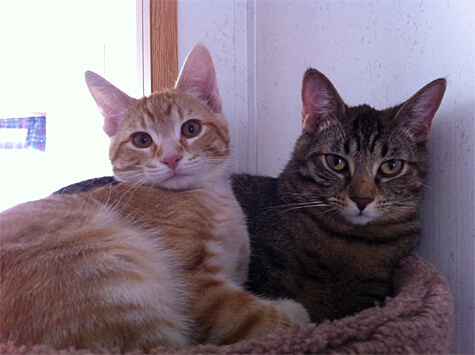 Back from vacation, home to my kitties!

Linda Hoang is a Canadian blogger based in Edmonton, Alberta, who writes about travel, food lifestyle and pet topics. She's also a seasoned social media/digital strategist with a journalism background. Linda loves exploring the world with her husband Mike, eating their way through cities, supporting local businesses, and photographing Instagrammable Walls. She is the founder of the Edmonton International Cat Festival and a fur-mom to two cats and two dogs.
PrevPreviousReview: Top of the World Restaurant at the Stratosphere (Las Vegas)
NextReview: Fogo de Chao (Las Vegas)Next