Happy New Year everyone! I was hoping my first post of 2017 would be some type of thoughtful recap of the past year and just as thoughtful look-ahead to the coming year, but I haven’t really had a chance to put together those thoughtful thoughts, so instead I’m going to blab on about some more Edmonton escape games. :)

I always love when an escape room introduces new rules or new types of gameplay. Each time you play an escape game, you’ll often get the how-the-game-works and please-don’t-look-for-clues-in-the-roof spiel from staff before you enter the room. A lot of the rules tend to be the same.

I’ve seen variations on the hint system – some places give you two hints for the 45-minute duration, some give you three, some officially give you two but wouldn’t say no if you asked for more hints, some require you to find hint chips within the rooms before you can ask for a hint, and for the first time in Edmonton at SideQuests Adventure Inc., we’ve got an escape room where you accumulate points for each puzzle you solve, and every time you take a hint, points are deducted from your final score! Pretty neat take on your typical escape game. 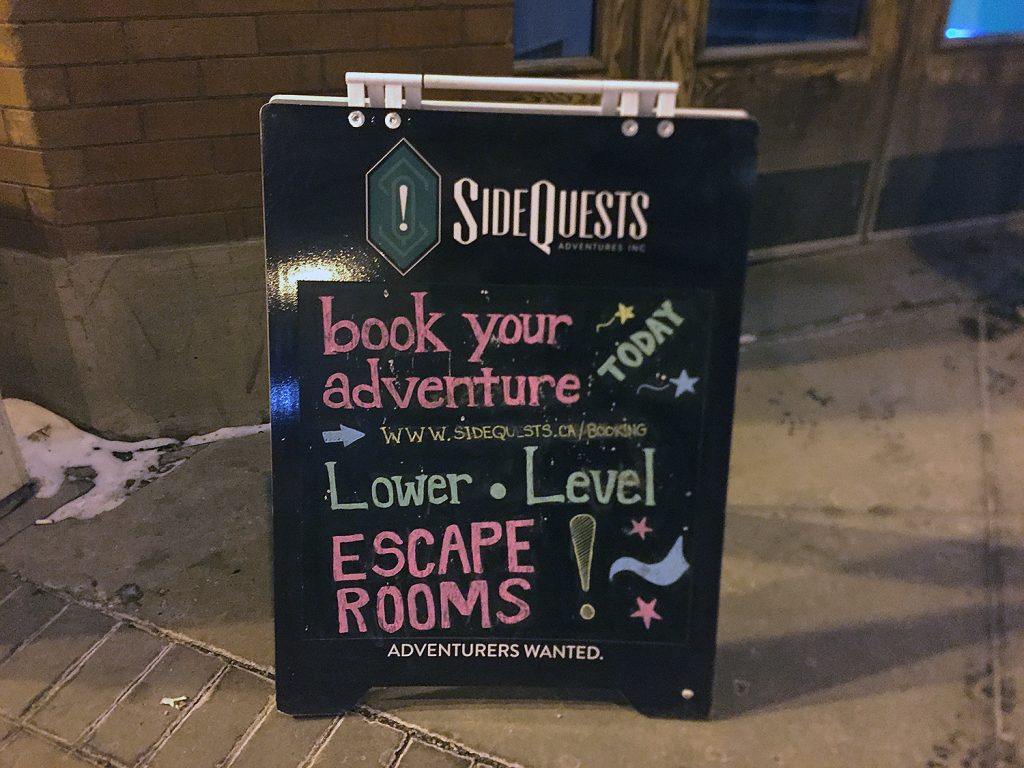 SideQuests Adventure Inc. is on 104 Street and 101 Avenue.

SideQuests is located on 104 Street and 101 Avenue (same corner as Stage 104). They opened just a few months ago and have two rooms: “The Expedition,” which is an Egyptian-themed room where you play Egyptology students exploring an ancient chamber, and “Uncle,” where you’re looking through your crazy Uncle Willard’s apartment after receiving a desperate plea for help. 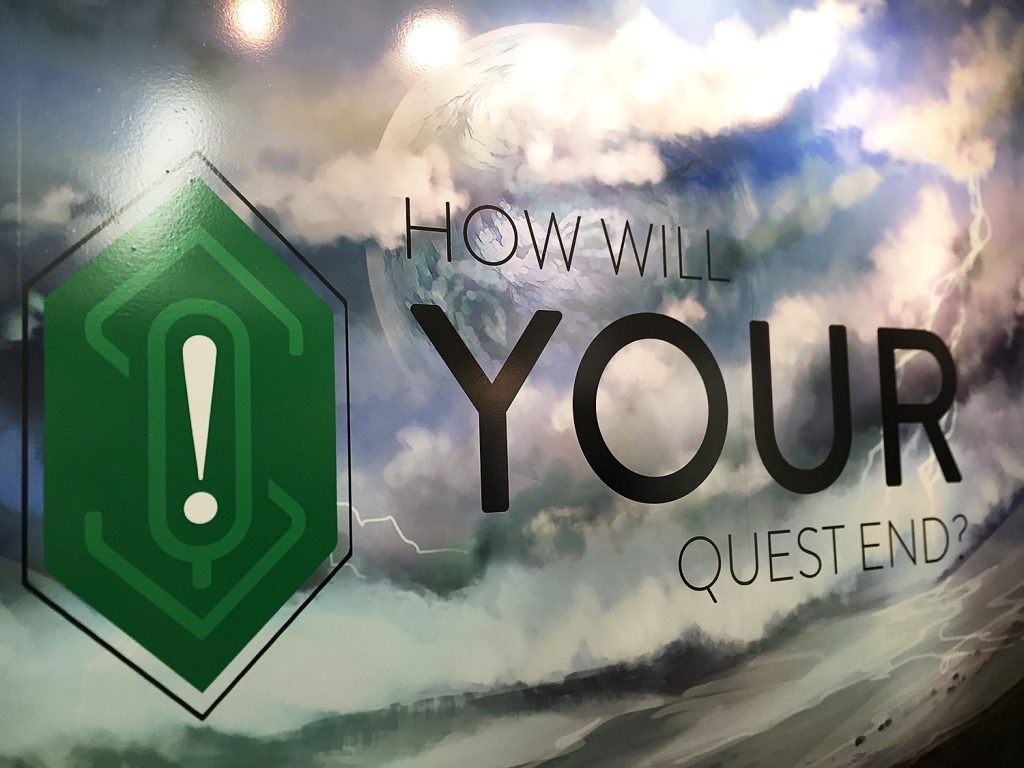 How will your quest end?!

My group was invited to come try both of SideQuests rooms! We went with our friends Tyler and Lyndsay for the first room (The Expedition) and Mike’s sister and brother-in-law Amanda and George joined us for the second room (Uncle). Tyler was brand-new to escape games (which is always fun to get someone’s first-time playing perspective)! 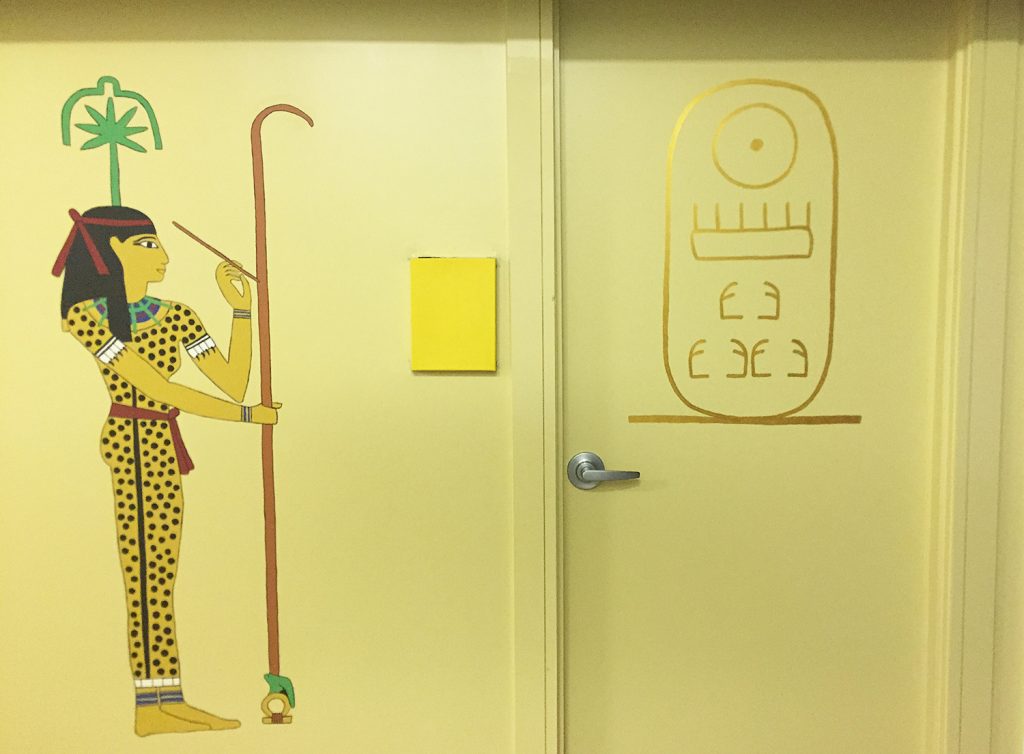 The group consensus for The Expedition was that it was fantastic! We loved the storyline and the “side quest.”

That’s another thing that’s unique about SideQuests – with each of their escape rooms, you’re going to have the main plot and puzzles to solve, along with a “side quest” or  secondary storyline where you can also solve puzzles that will lead to that ending. If you have enough time, ideally, you’d complete both the side quest and the main mission but sometimes – and depending on which ‘path’ of puzzles you choose to veer off to, you may only solve one of the goals.

With The Expedition Room, it was very clear that there were going to be two streams of puzzles you could play towards – so it made sense for us to split up and try to complete both.

Our group loved the decor and production value of this room. We were also really happy with the untraditional type of puzzles. A lot of escape rooms end up using a lot of padlocks as their primary means of opening boxes and solving puzzles but The Expedition had a lot of really interesting, different type of puzzles – involving weights, ropes, and more! (Don’t want to spoil it for you). There are some really dynamic moments. 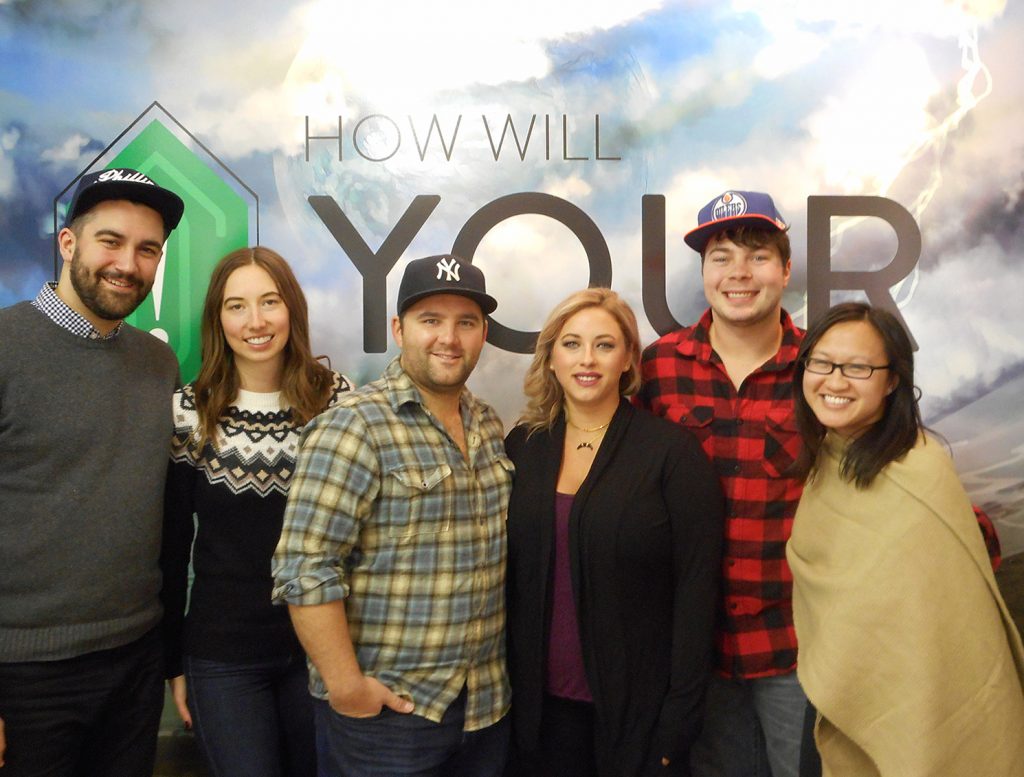 We continued to be impressed with the production value in the Uncle room. The flow of this room was also really nice. Similar to what I’ve written about some escape games in past – I really do struggle with whether 6 people is too many people for a lot of escape rooms, even though the companies themselves recommend that you can have up to 6 (for most of them).

There were moments in Uncle (which also doesn’t use as many padlock-type puzzles – yay!) where we felt a bit cramped, and perhaps that there wasn’t enough puzzles to split off to try and solve. The flow was very clear – which is nice, but perhaps so linear that it made it difficult for more than 2-3 people to do a puzzle at a time – that is until you get to the point where it veers off into a “side quest.” In the Egyptian room, you’re on that “side quest” or main quest path quite quickly so you can split off and focus, whereas you don’t necessarily get to the side quest option of Uncle until you’re deeper in.

It was still quite a fun room, though we didn’t escape. We did however, escape The Expedition (in like really record time) and ended up getting one of the highest scores (top 4) of any group who has tried the room since it opened (woo hoo!) 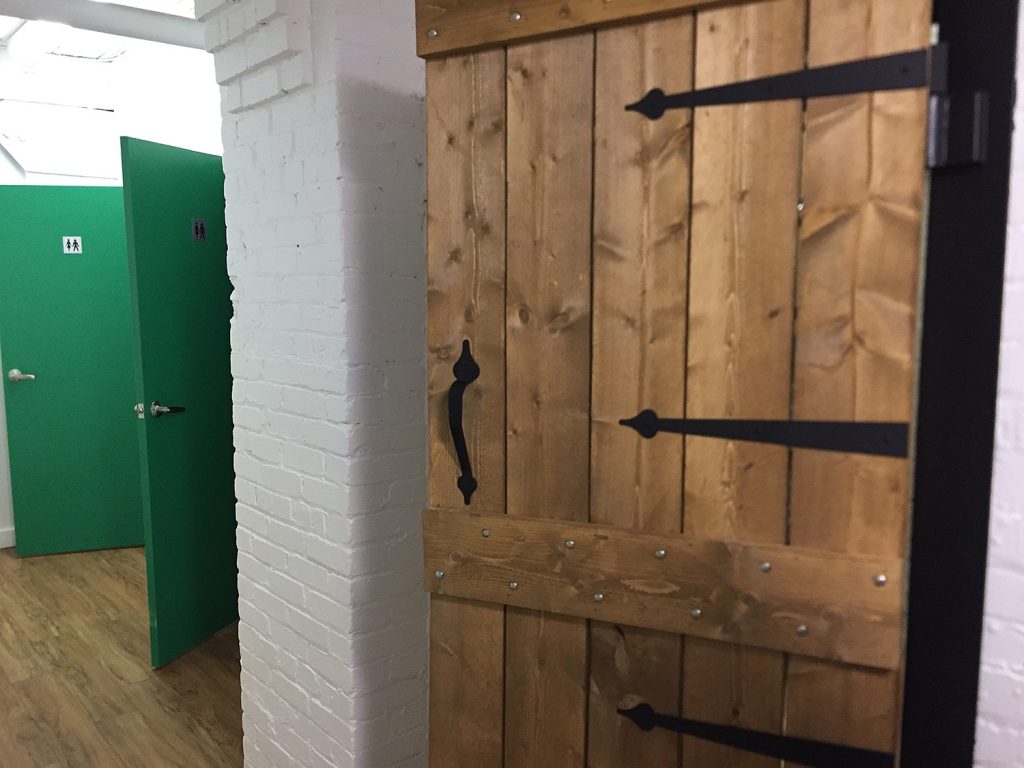 Another thing about SideQuests is that staff set the room scenario in-character, live (not using pre-recorded audio or video like most of the other escape rooms in the city). There’s another escape room in the city that also uses ‘actors’ to set up their escape rooms but we found the experience there can be kind of hit or miss because the actors are a bit too in-character and it either works really well (we had a room where it was fantastic) or comes off like they’re trying too hard (and depending on whose with you in the escape game, they might not be as willing to ‘play along’ with the acting).

They have a waiting room/lobby with board games you can play with while you wait for your game to start too – which is where we played Sushi Go! for the first time and looooved it. I had wanted to pick up this game for my personal game collection in past but never committed – after trying it out free at SideQuests, I’m totally getting it! 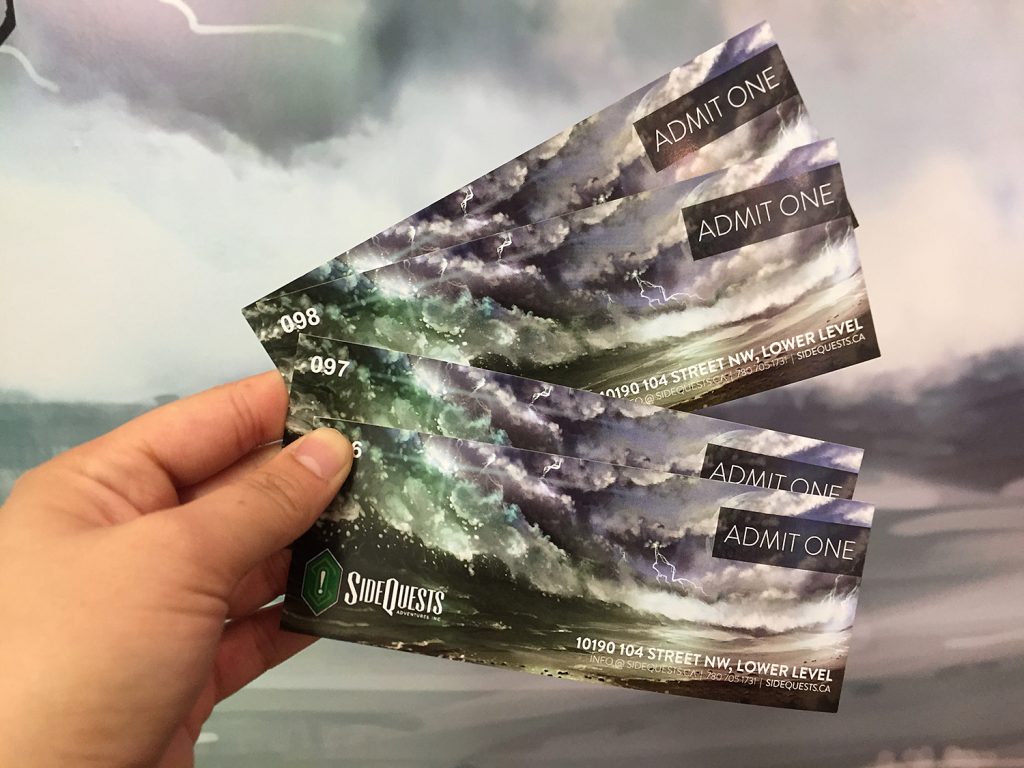 Enter to win one of two pairs of passes!

SideQuests’ rooms are a whole lot of fun and I totally recommend you try them. The puzzles are different, the production value is great, the points/scoring system is a nice new element, and The Expedition may well be one of my favourite rooms in the city!

I’m looking forward to coming back to give their new room Abduction a shot when it’s ready, and we actually got a tour of the whole SideQuests space and they actually have a ton of room to work with for even more rooms, which I’m excited about.

You can also sign up for their free membership (SideQuests Adventurer’s Guild) where you earn points for every visit you make, and eventually trade those points in for certain perks (like room admission).

If you haven’t tried SideQuests yet, I’m hoping you can go for free by entering to win one of two pairs of passes that I’m giving away!

There are a few ways you can enter for a chance to win one of two pairs of passes to SideQuests, including:

Disclaimer: I will always provide my 100% honest opinion on this blog. SideQuests partnered with me to run a giveaway and try their rooms (complimentary). This has no impact on the opinions stated in this post. (I wouldn’t say I liked it if I didn’t!)

Linda Hoang is a Canadian blogger based in Edmonton, Alberta, who writes about travel, food lifestyle and pet topics. She's also a seasoned social media/digital strategist with a journalism background. Linda loves exploring the world with her husband Mike, eating their way through cities, supporting local businesses, and photographing Instagrammable Walls. She is the founder of the Edmonton International Cat Festival and a fur-mom to two cats and two dogs.
PrevPreviousReview + Giveaway: Time Escape Edmonton
NextExplore Edmonton: Things To Do For Valentine’s Day 2017Next