Have you ever been to a dinner theatre? I hadn’t – until just recently, when the Jubilations Dinner Theatre (in West Edmonton Mall) invited me to come check out dinner and their show. 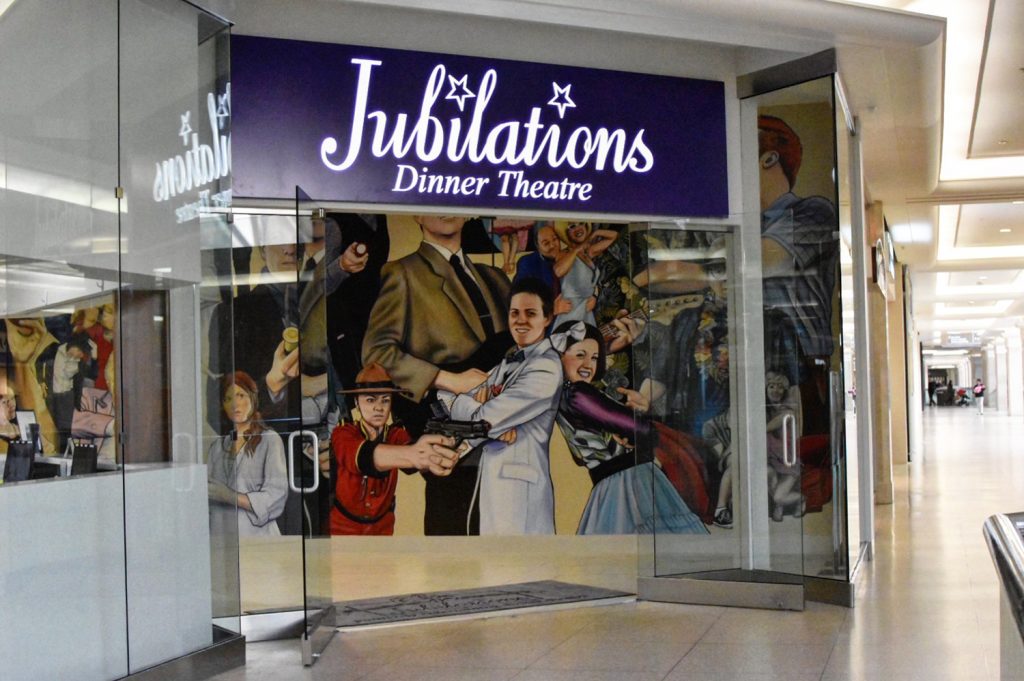 Jubilations has been part of the Edmonton theatre scene for over 18 years. The shows are meant to be hilarious parodies of popular culture, movies, music, and TV. So immediately, there’s a cheesy factor to them (which is a good – and expected thing!)

The musicals are split into three acts, with a four-course dinner served in between. Shows run Wednesdays through Sundays, and when I went with my friend Vanessa, on a Wednesday, we really weren’t sure what to expect. 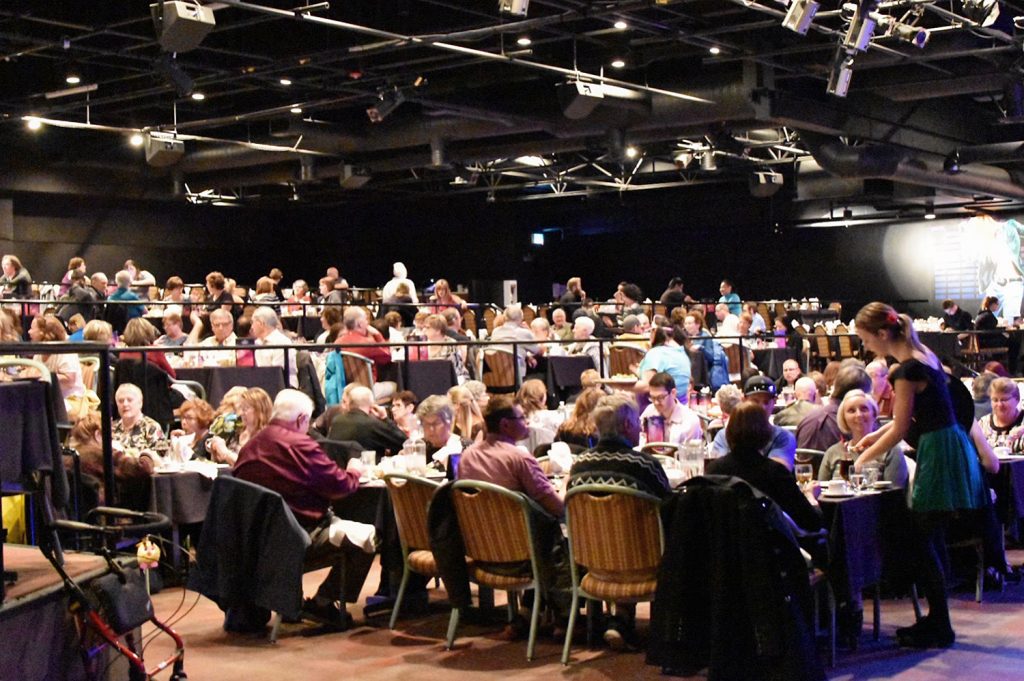 The Jubilations Dinner Theatre is PACKED on a Wednesday night!

Surprising both of us was just how incredibly packed the theatre was for a Wednesday night! Wow.

There must have been around 300 people in the audience that evening – primarily an older demographic, but with a fair bit of kids and teens sprinkled in between (the Jubilations Dinner Theatre obviously makes for a very family-friendly night out!)

Flashdance: An 80s Flashback is playing at the Jubilations Dinner Theatre from April 7-June 4.

Currently playing at Jubilations Dinner Theatre: Flashdance – An 80s Flashback, a story of a young woman working two jobs as she tries to save up money to go to dance school and fulfill her dream of becoming a professional dancer. It’s based on the 1983 movie of the same name (with similar plot line) and features tons of hit songs from the 80s. (The beauty of these dinner theatre shows is that you’ll likely recognize all the songs they sing!) 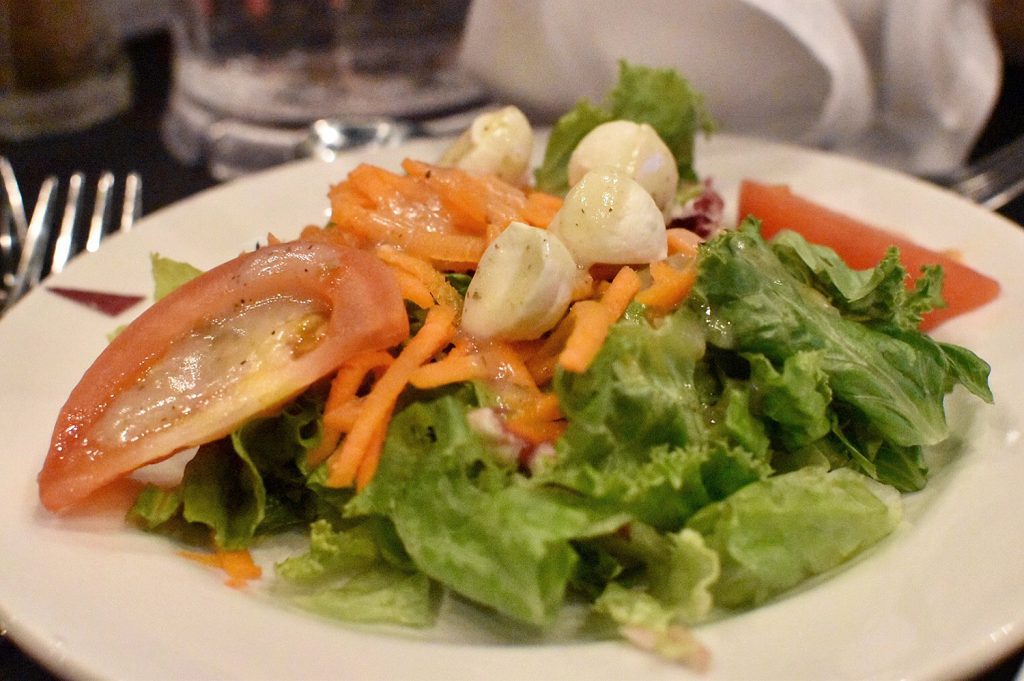 As soon as you get into the theatre, you’re greeted by servers who are in character. The four-course meal is comprised of a starter salad, soup, entree, and dessert. You get the salad and soup before Act 1, your entree before Act 2, and finally your dessert before Act 3.

The menu items are named very punnily – for example, our starter salad was called It’s Raining Greens – a simple mixed green salad with tomatoes, bocconcini and in-house herb dressing. Our soup was called Dancing in the Leeks – their take on a cream of potato and leek soup. 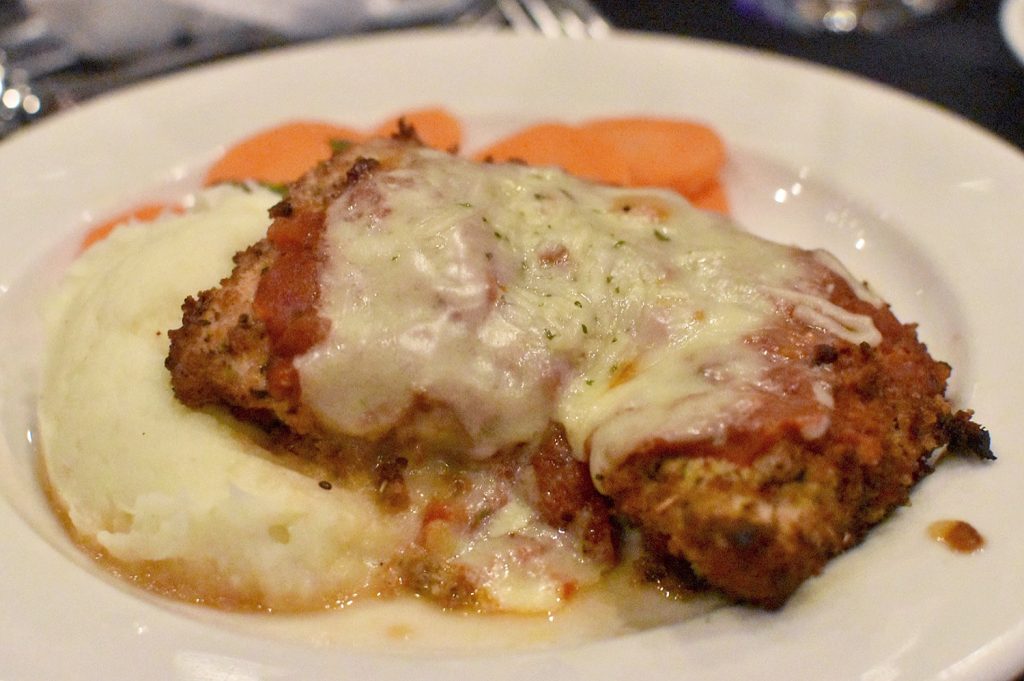 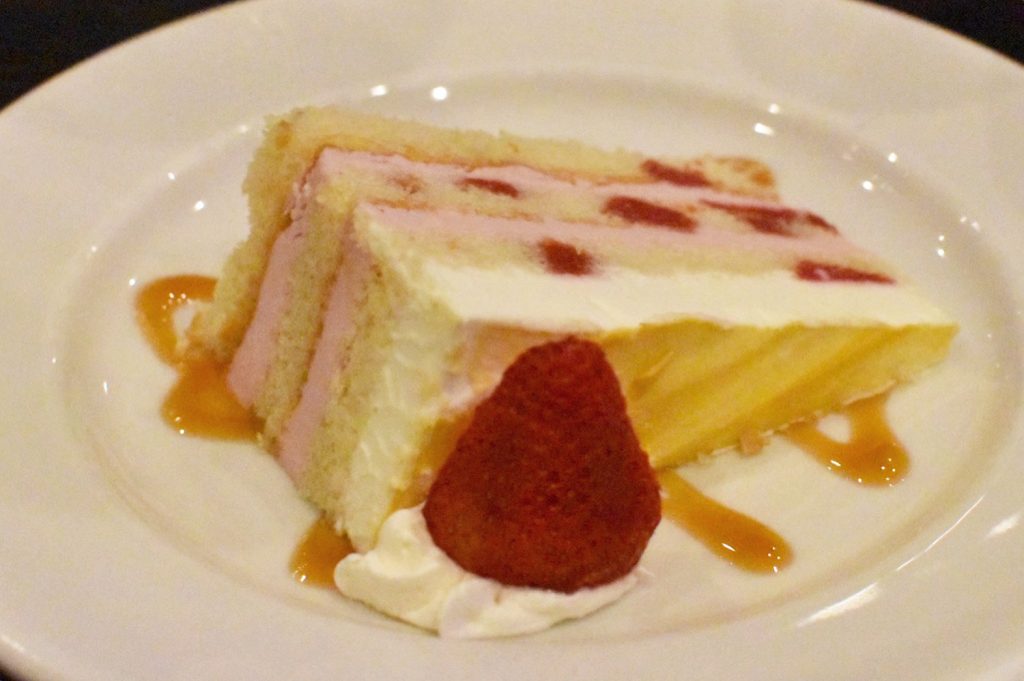 The dinner at Jubilations Dinner Theatre was good but nothing particularly spectacular. It had a ‘Sunday dinner at the in-laws’ quality to it – tasty but comfortable, regular. Which of course, is perfectly fine for Sunday dinner at the in-laws, and I would say, probably fine for this outing – where the show is really the focal point. You’re not coming for a fine dining type of meal, or a hipster type of meal even. It’s just good, regular food.

What was really impressive about dinner though was the timing and organization of getting all the food out at the same time and at the right time (between the Acts) to the hundreds of people in the audience. As soon as an act finished, food was hitting the table. I’d have been curious to see how the operation was unfolding in the kitchens – it was very impressive! 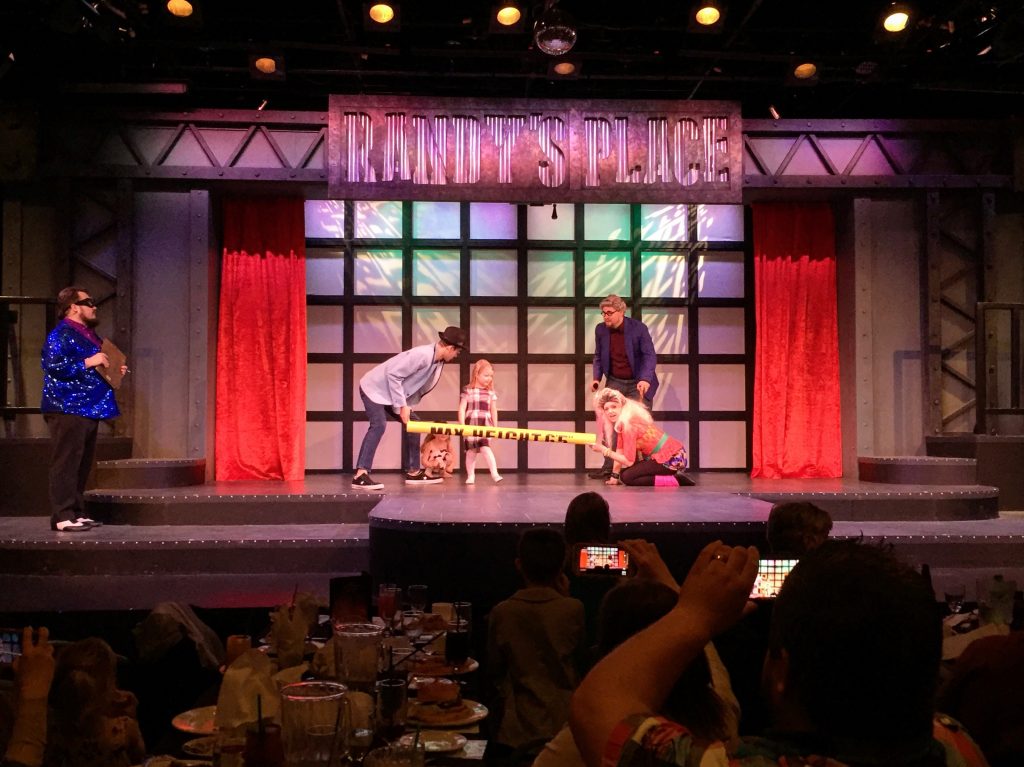 In between acts, some on-stage activities with kids at the show!

Something that stood out for me at the show was how interactive everything was. There are various points throughout the show where cast members would bring up audience members, but it all felt quite seamless and I was really surprised by how open and interested audience members were to be involved in the show. It was really cool.

In between acts, there were also on-stage activities with the cast members and the kids in the audience.

Applause for the cast! Fun show at Jubilations Dinner Theatre.

There were moments throughout the show that got a lot of laughs from the audience (myself included). Some of my favourite parts were the “slow motion” scenes where the lead character and her love interest were noticing one another in a romantic way, as well as when the lead character would “ride” her bike, and stagehands were waving shrubs and prop birds around her as she rode. (You’ll get it when you see it, lol).

There was great energy in this show. I mentioned the cheesy factor earlier on but will say again, Flashdance: An 80s Flashback is pretttttty cheesy – that includes the acting and the plot lines and everything. But I mean that in the best way possible. As these shows are meant to be funny, the cheesiness is a must and they really deliver on that. 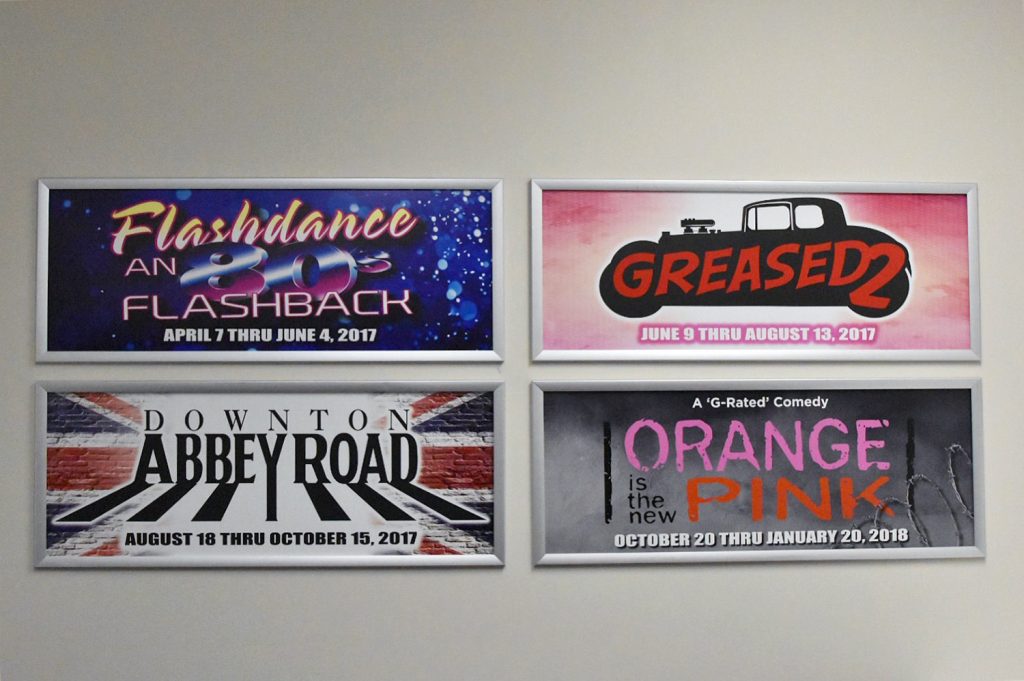 Learn more about those shows here.

Tickets for Jubilations Dinner Theatre are as follows:

Your ticket includes admission to the three-act musical comedy show, the four-course dinner (starter salad and soup, entree, and dessert), tea and coffee. They also have different packages you can buy (tickets for a certain number of shows at a discounted rate). 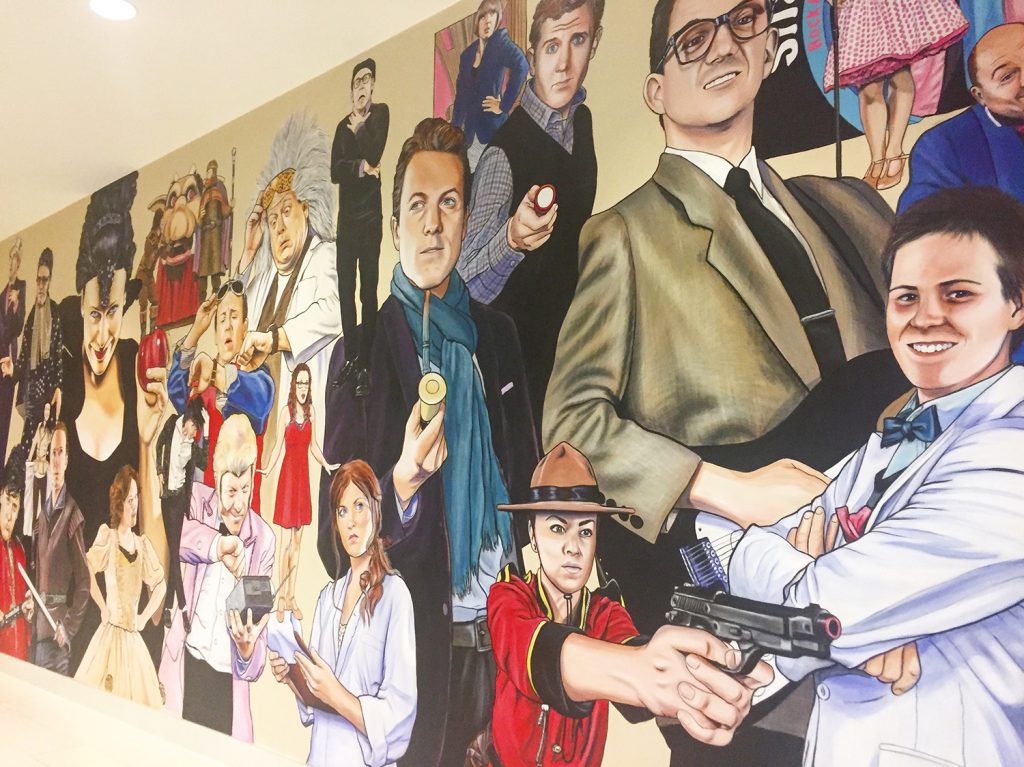 I think Jubilations Dinner Theatre is a wonderful piece of our city’s arts scene. I was genuinely surprised at how many people take in dinner and a show on a weekday and think that’s really cool. It’s a great thing to do in our city. You’re also supporting great local/Canadian talent, and you’re getting entertainment with your dinner!

I think my parents and in-laws would love to check out dinner and a show at Jubilations! I’m adding it to my list of family outings/gift ideas. In the meantime, I’m excited to give away a pair of tickets so you can check out Flashdance: An 80s Flashback at Jubilations Dinner Theatre too. Enter below:

There are a few ways you can enter for a chance to win a pair of tickets to Flashdance: An 80s Flashdance at Jubilations Dinner Theatre including:

Have you been to Jubilations Dinner Theatre? What did you think?

Disclaimer: I will always provide my 100% honest opinion on this blog. Jubilations Dinner Theatre invited me to come experience dinner and a show and share my thoughts on this blog. My tickets were complimentary. This has no impact on opinions stated in this post.

Linda Hoang is a Canadian blogger based in Edmonton, Alberta, who writes about travel, food lifestyle and pet topics. She's also a seasoned social media/digital strategist with a journalism background. Linda loves exploring the world with her husband Mike, eating their way through cities, supporting local businesses, and photographing Instagrammable Walls. She is the founder of the Edmonton International Cat Festival and a fur-mom to two cats and two dogs.
PrevPreviousReview: Calle Mexico (Restaurant)
NextReview: Uccellino EdmontonNext