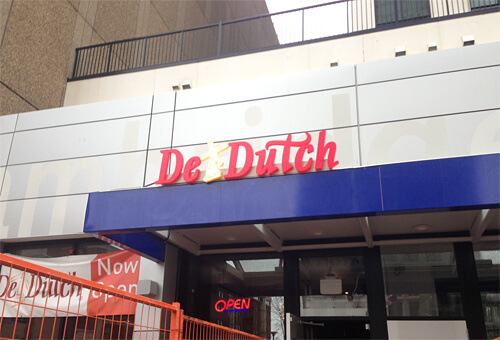 Two Sundays ago Mike and I went to try De Dutch Pannekoek House in downtown Edmonton. I had been hearing a lot of great Twitter reviews about the place and we love going for brunch so it seemed like a good opportunity to go. 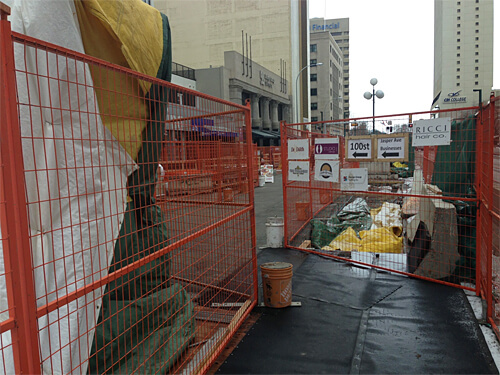 Getting to De Dutch is a bit of an adventure.

What we don’t love is finding parking downtown and weaving our way through downtown construction. Boo. We couldn’t find any metres so we ended up parking in a parkade behind de Dutch (putting us out $5) and then it took two wrong turns navigating through makeshift paths due to Jasper Avenue construction before we were able to get to De Dutch. Not their fault that construction is inconveniencing customers though! I feel for them and other businesses affected by the construction. Hopefully it’s not affecting business too badly. 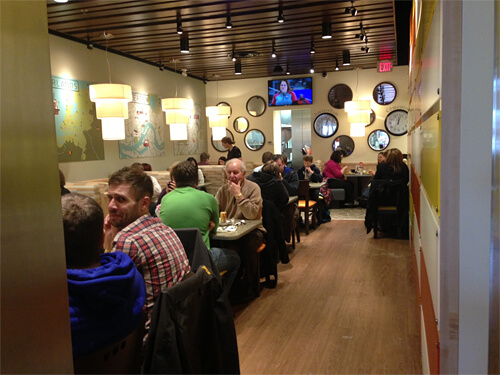 Well actually it definitely didn’t look like construction was affecting their business badly at all. When we arrived we were met by a long lineup of people waiting to get in! Much like the lineups you’d see at Cora’s, we weren’t surprised though it was a chilly morning so standing outside albeit briefly wasn’t too fun. However the lineup looked a lot worse than it was – most of the people were waiting for big tables so Mike and I actually ended up getting a two-person table in about 10 minutes. Not too shabby! 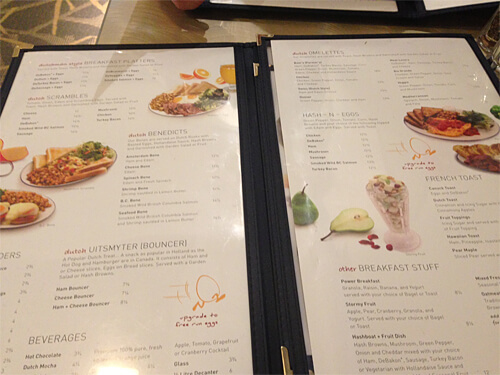 There’s quite a bit of options at De Dutch and the dishes range from about $14 to $18. The latter end of that is a bit more than I think people should be paying for breakfast/brunch but I found my $14.25 shrimp benedict to be a fair price point! (I added turkey bacon for an extra cost). 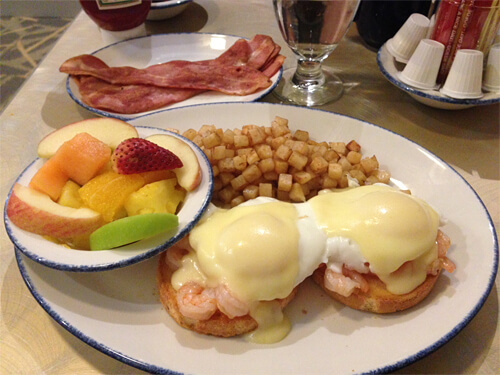 I have never had a shrimp benedict before! I love eggs bennys, it’s usually what I get for brunch no matter where we go so I was excited for this new option of shrimp instead of your typical ham or bacon. 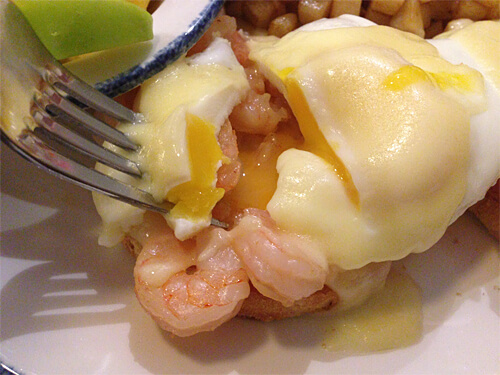 A closer look at my shrimp benedict!

There’s a closer look at my shrimp benedict. The lemon butter shrimp was delicious, Hollandaise sauce rich and creamy, and the eggs were cooked perfectly. I liked that their hash browns were small cubes as opposed to the bigger cuts you get at other places (I prefer skinny, shredded, or small hashbrowns over bigger ones!) The fruit bowl was a bit of an afterthought. The other option you can get is a garden salad but I thought a garden salad with benedict was a weird mix. 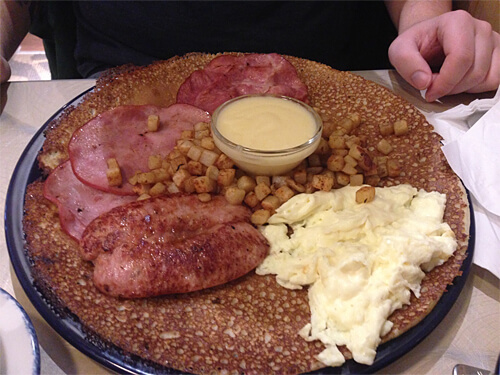 The Boar’s (Farmer’s) Pannekoek – two eggs, bratwurst, slices of DeBakon and Ham, served with hash browns and Hollandaise Sauce on top of a Dutch Pannekoek.

Mike got what De Dutch is all about – the Pannekoek. Or in this case the ‘Boar’s (Farmer’s) Pannekoek’ which came with two eggs, bratwurst, slices of DeBakon and Ham, with hashbrowns and Hollandaise Sauce on top of the pannekoek. A pannekoek is a Dutch pancake, typically laid out across your entire plate, open-faced. It’s very thin and crepe-like. Mike enjoyed his pannekoek, eating everything up except some remaining scrambled eggs. He said the scrambled eggs weren’t tasty enough on their own once he had finished off all the meat – but beyond that, good dish. Though like me, Mike isn’t a big fan of paying $18 for a breakfast/brunch dish.

Overall we really enjoyed De Dutch. The service was good despite the place being super busy – we got our food pretty quickly. The place had a very bright, warm ambience to it. I was thrilled to be able to try a different kind of benny while still being able to stick to my typical benny for brunch choice. I ate up everything on my dish except the fruit and I think the price point for it is fair. Mike liked his pannekoek but the price point there was not as great. We’ve had better brunches (our favourite spot is The Loft at Sandyview Farms) but De Dutch is definitely up there on the brunch list now. We probably won’t be back often as we live far west end so it’s quite a drive to get there. The search for parking and then out-of-the-way walking due to construction is also a deterrent. But I’m glad to see the place was literally packed to the brim when we went – because as I wrote, I do feel for the businesses affected by all the downtown construction so it’s nice to see that De Dutch, being new and in the thick of construction, appears to be doing fine! It’s certainly a lovely addition to the batch of great restaurants we’ve got here in Edmonton.

So have you been to De Dutch?! What did you think?

Linda Hoang is a Canadian blogger based in Edmonton, Alberta, who writes about travel, food, lifestyle and pet topics. She's also a seasoned social media/digital strategist with a journalism background, the founder of the Edmonton International Cat Festival and co-founder of Stop Race Based Hate, an online anti-racism education tool. Linda loves exploring the world with her partner Mike, eating their way through cities, supporting local businesses, and photographing Instagrammable Walls. Linda is a fur-mom to two cats and two dogs.
PrevPreviousNews Online: Sherwood Park woman’s soaps set to clean up at the Oscars
NextSocial Media Column: #MeettheMedia and the Yeggies nomineesNext