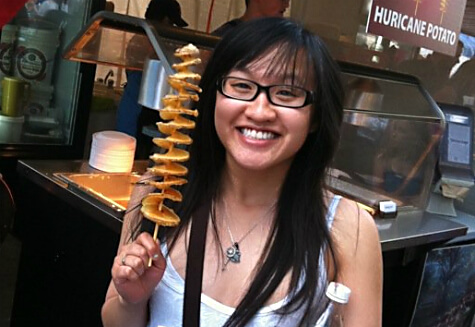 At the 2011 Taste of Edmonton - Having a "Hurricane Potato!"

On Wednesday I went to this year’s Taste of Edmonton with some of my lovely friends!

I haven’t been to a Taste of Edmonton in years (well, I might have stopped by one time during a summer while I was reporting/taking photos, but that doesn’t count!) So because of previous years’ absences, I was very excited to go this time around! I mean, it’s mostly the same thing every time, so I wasn’t expecting to be blown away by the event but it was just an overall fun, summer thing to do, you know?

As a group we tried the following (mostly) yummy items:

Mike loves the beef and sesame sauce from Mt. Fuji so he was eager to try Japanese Villages’. 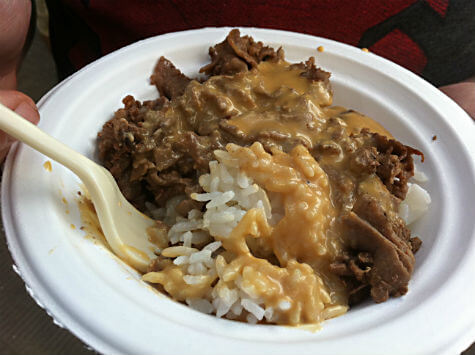 We both didn’t think it was as good as Mt. Fuji’s. The sauce was a little weird. And we <3 Mt. Fuji. My friend Rachel was super excited to head to The Lingnan booth. She puts in the Cantonese subtitles for The Lingnan family's show "Quon Dynasty" so she's a huge fan of the entire family, especially son/chef Milo, who she got to meet: [caption id="attachment_6395" align="aligncenter" width="475" caption=""The Lingnan's" Milo Quon with Rachy Lees at Taste of Edmonton!"] 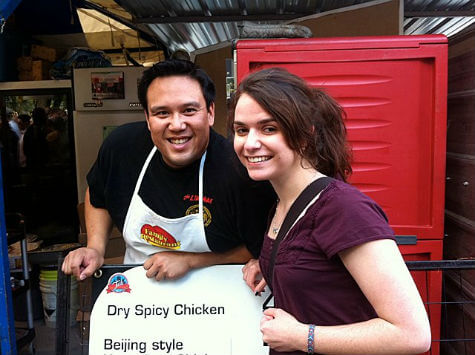 Their dry spicy chicken was delicious and very popular – the line up was so long! It also turns out my brother’s friend is dating one of the Quon’s/also appears in the television show and was helping out at the booth too! A nice surprise, I didn’t know he was a reality star, haha! ;)

I had to try the Palace Banquet’s bacon wrapped scallops. 1) Because it’s bacon. and 2) Because I saw a lot of tweets about it (both good and bad, but I wanted to be the judge!) 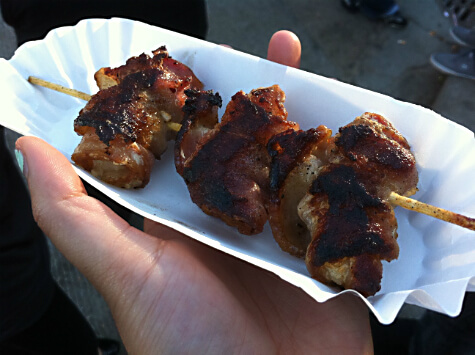 It was really salty – but I’m a pretty salty-loving person, so it was quite enjoyable! Note: The line up for the bacon wrapped scallops was SUPER long and by the time I got in line there was an extra wait because they had sold so many that they needed time to cook up a new batch of bacon! 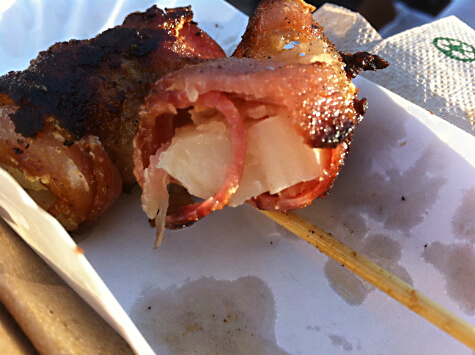 Mike and my friend Alyssa were dying to have The Hat’s deep fried mars bar. I had absolutely no interest in it, lol. Alyssa loved it, but Mike thought it was only okay. 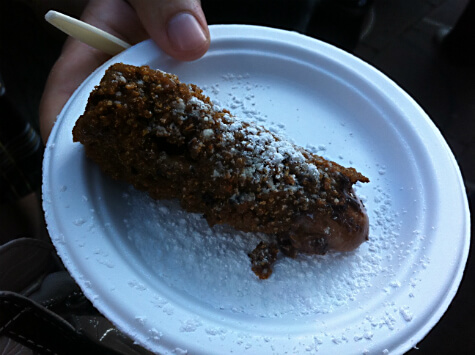 Strawberry lemonade and bubble tea were nice thirst quenchers and Mike topped off the trip with The Sutton Place Hotel’s cappuccino chocolate shooter cup because we had 1 food ticket left. The only item at the Taste of Edmonton that is 1 ticket is that… 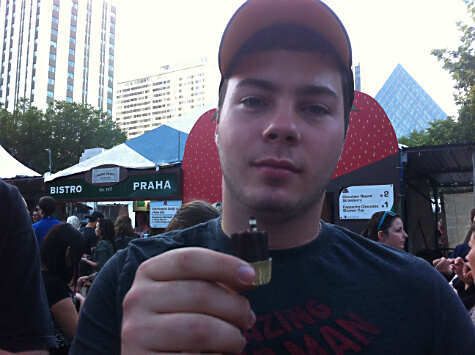 We spent almost two hours at the Taste of Edmonton and it was pretty fun times! :) We explored The Taste of Desserts in the AGA but other then that didn’t check out any of the musical acts, the beer gardens or The Taste of Wine. As I said when this post started, the Taste of Edmonton is usually always the same thing, and not the most exciting event but it filled its purpose as a fun, outdoor summer event (involving food) to attend. *crosses off my list* 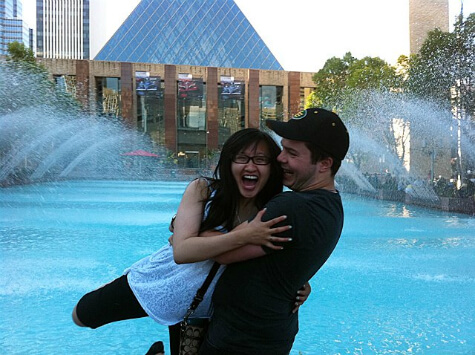 Hanging by the fountain at Taste of Edmonton!

Today was the last day so my review and recommendations kind of come at a bad time (lol), but my week was busy okay! Still, if you read this today you should have time to go and enjoy the last couple of hours if you really wanted to!

And if you have gone to this year’s Taste of Edmonton, what did you think?!

Linda Hoang is a Canadian blogger based in Edmonton, Alberta, who writes about travel, food lifestyle and pet topics. She's also a seasoned social media/digital strategist with a journalism background. Linda loves exploring the world with her husband Mike, eating their way through cities, supporting local businesses, and photographing Instagrammable Walls. She is the founder of the Edmonton International Cat Festival and a fur-mom to two cats and two dogs.
PrevPreviousClicks of the Day: Apology!
NextClicks of the Day: July 29,30,31 2011 Weekend Edition!Next