I haven’t created any new Circles than the ones that come default with Google+ when you first sign up, so that’s not really an issue for me – but then again I’m not really heavily using Google+ (yet?) either.

Interesting! I definitely am not part of that statistic, lol.

The Last Airbender is SOOOO bad. Poor Transformers made it on the list twice, lol.

So weird. I am not down with this “tiny house movement!”

I would fall under the “peope who do not care about the issue” — but if I had to choose based on how lovely Will & Kate are, I would say woo hoo monarchy!! lol :)

Hm, interesting. Will we see other phone companies jumping onto this too?

So neat! Where many Harry Potter scenes were shot.

Twitter made some huge gains in Canada since 2009! Also, it would be VERY hard for me to NOT visit a social network at least once a day. AT LEAST.

If only everyone could just have as much money as they needed and the world would be at peace! (#wishfulthinking)

Great cast!!! Should be good. I barely remember seeing the original Oz so this coming out would be a good reason to check out the classic again too.

Only 28% of the phone market? I don’t know how people can use non-smartphones!

Probably for the best, since these “parents” obviously SUCK at parenting, but geez. STUPID!

Lol, what a terrible name for a place: “Death Valley” in California. Who would want to go there? lol. No where in Canada makes this list (not surprising).

Most bad-ass video ever! I want cool cameras…

I love all of these superhero movies!! What happens after we’ve sped through every comic book hero and reboots? Maybe a new era of comic book heroes. ORIGINALITY?! What?! lol

Yet still (starting pay) than most in the media industry, I’m sure. lol

Bad news! My parents have drilled credit card debt into my brain so I’m very good with the handling of my monies. People should not be using their credit cards to pay for things when they don’t have the money to pay off the cards…

Coolest thing ever! “Around a black hole 12 billion light years away, there’s an almost unimaginable vapor cloud of water–enough to supply an entire planet’s worth of water for every person on earth, 20,000 times over.”

I definitely think making everyone use their real names to post online would reduce the amount of idiotic posts out there.

I do not think it has been rendered obselete. That’s a bold and, I feel, incorrect statement.

“I feel greatly accountable for having to make the markdown.” – what a move. How many top CEOs would do that for your their company?

Good tips! Well, not that I need it, I’m not going anywhere anytime soon.

Some of these are hilarious! 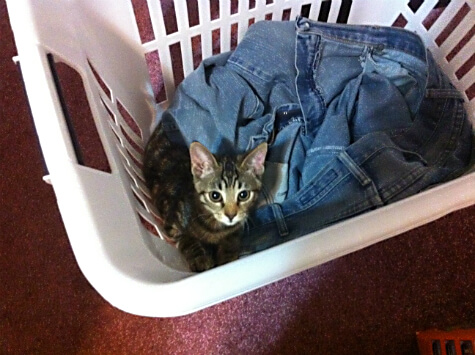 Linda Hoang is a Canadian blogger based in Edmonton, Alberta, who writes about travel, food lifestyle and pet topics. She's also a seasoned social media/digital strategist with a journalism background. Linda loves exploring the world with her husband Mike, eating their way through cities, supporting local businesses, and photographing Instagrammable Walls. She is the founder of the Edmonton International Cat Festival and a fur-mom to two cats and two dogs.
PrevPreviousRecap: Taste of Edmonton 2011
NextClicks of the Day: Monday, August 1, 2011 Edition!Next