One of my favourite restaurants in the city is Bodega! It’s run by the same duo behind the wonderful SABOR seafood restaurant – Christian Mena and Lino Oliveira, so you’re guaranteed a great experience.

(They also have a third spot on 124 Street coming soon!) 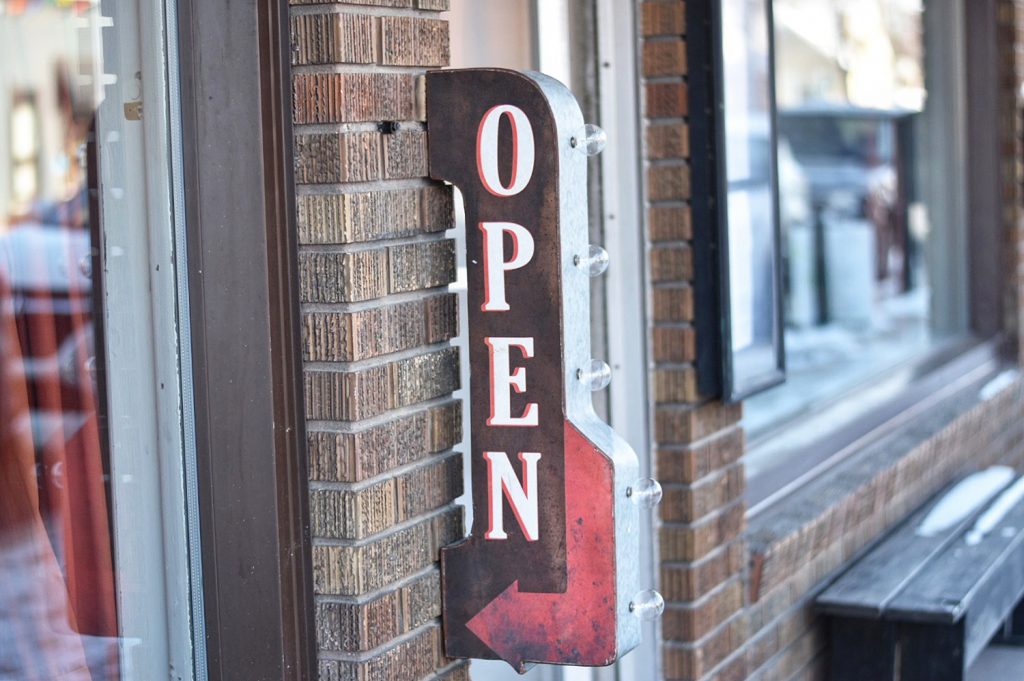 Bodega Highlands by SABOR located on 112 Ave and 65 Street.

Both Bodega locations offer the same tasty tapas, but Bodega Highlands also serves up Spanish brunch on Saturday and Sunday! (Which is an important brunch distinction- restaurants that serve brunch should serve it both days of the weekend, don’t you agree?)

I recently tried Bodega’s beautifully plated, filling and delicious brunch, then came back just a few days later for a most excellent dinner! I would highly recommend either meal. 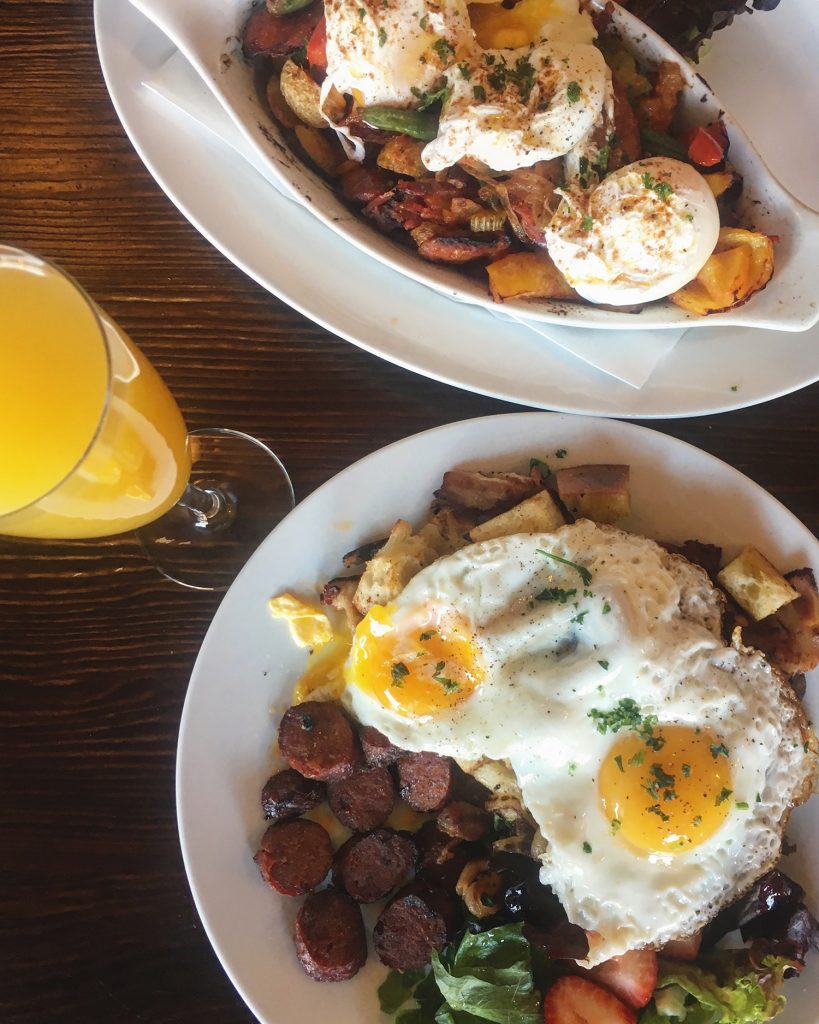 There are a ton of options for brunch in Edmonton these days – lots of new and old spots, lots of great ones (and many of which I still need to blog about!) A lot of these brunch spots, while great, generally serve up a lot of the same (because, brunch is brunch).

Bodega is a wonderful break from your typical brunch experience! 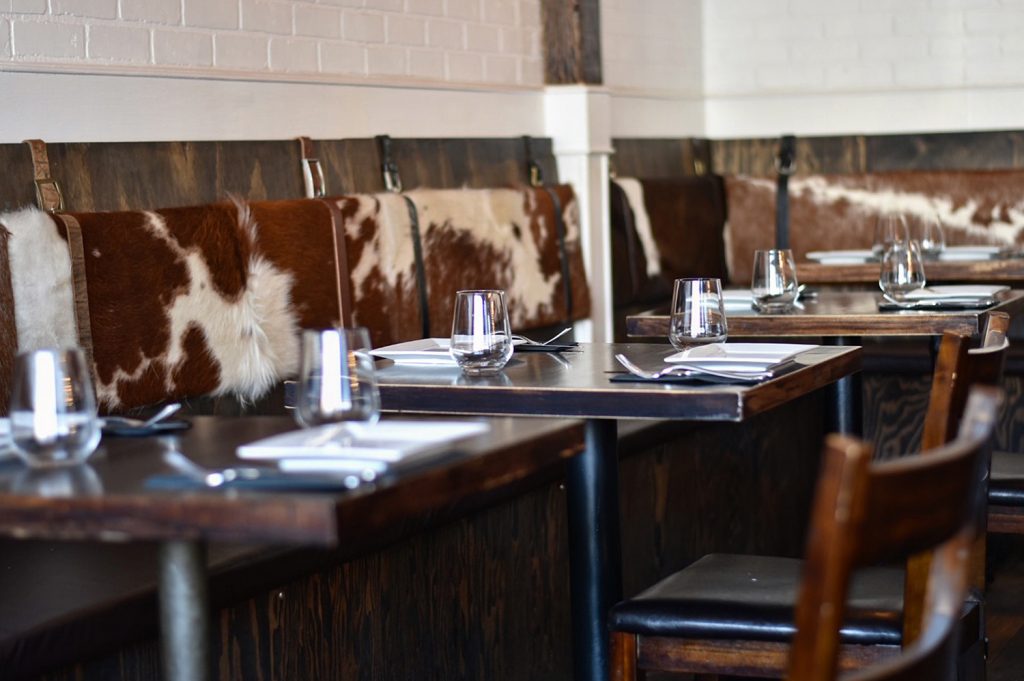 For our brunch, Mike and I were joined by our friends Vanessa and Marcel.

(Vanessa is actually well on her way to becoming the city’s brunch queen, she’s Instagramming her brunch adventures at @becausemimosas and tries a new brunch spot each weekend!) 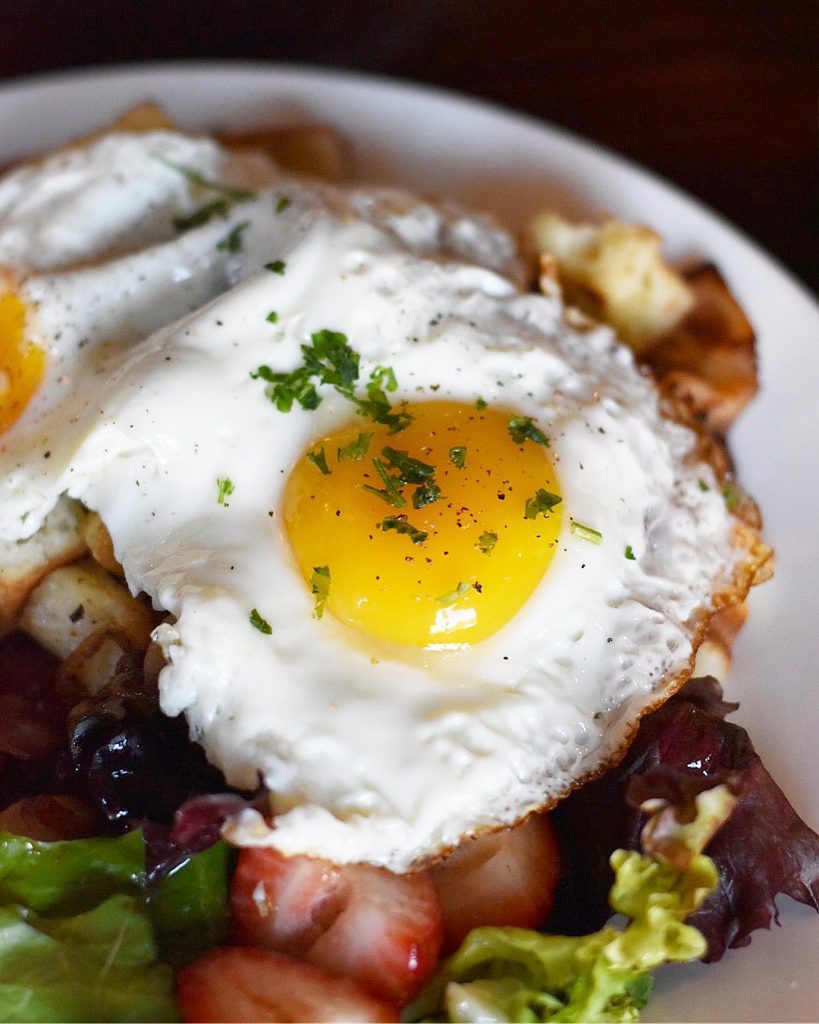 I ordered the Migas con Huevos, sautéed bread crumble and bacon with two fried eggs and beef sausage. ($15) The yolk was super runny – just the way I like it. Bread crumbs, bacon and sausage are also a combination I’ve never tried but definitely would again. And the salad was a nice touch because I don’t typically, intentionally order salads (especially for brunch) so this felt like a good health balance that I didn’t even ask for, lol. 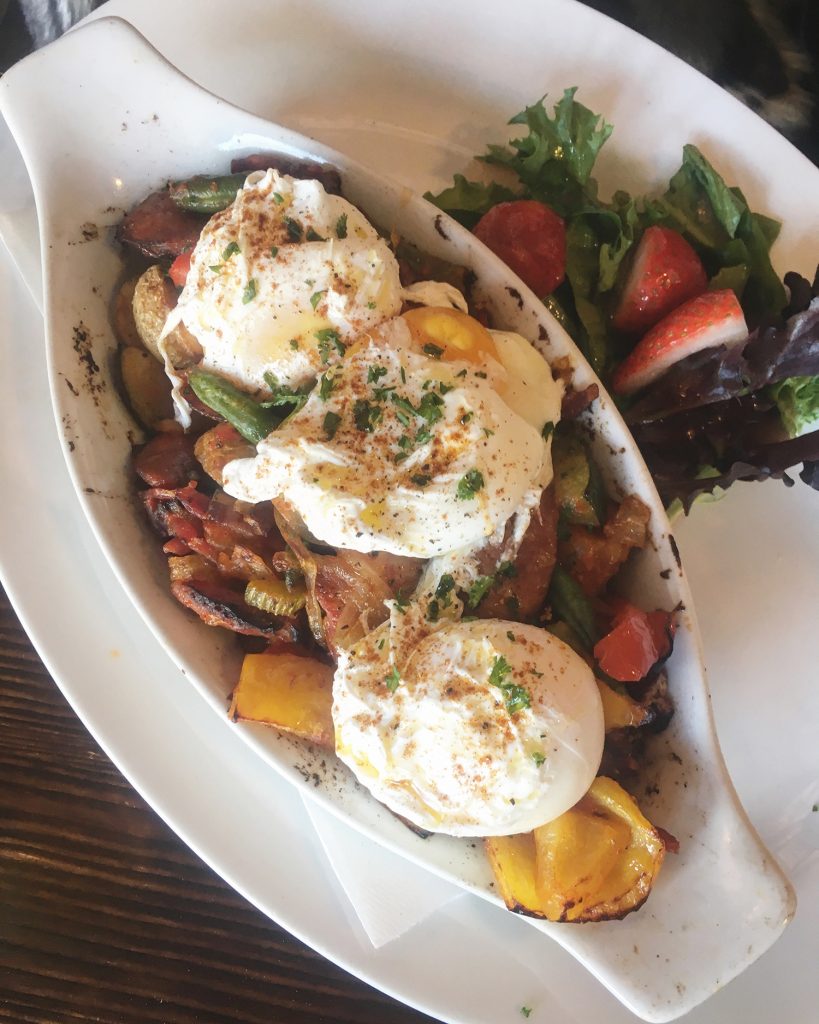 Just as tasty as it is pretty. Huevos a la Flamenca baked eggs with chorizo, serrano ham, potatoes, vegetables and tomato sauce ($15).

Vanessa had the Huevos a la Flamenca baked eggs with chorizo, serrano ham, potatoes, vegetables and tomato sauce ($15) and thought it was really good (and so, so pretty! Like its name!) 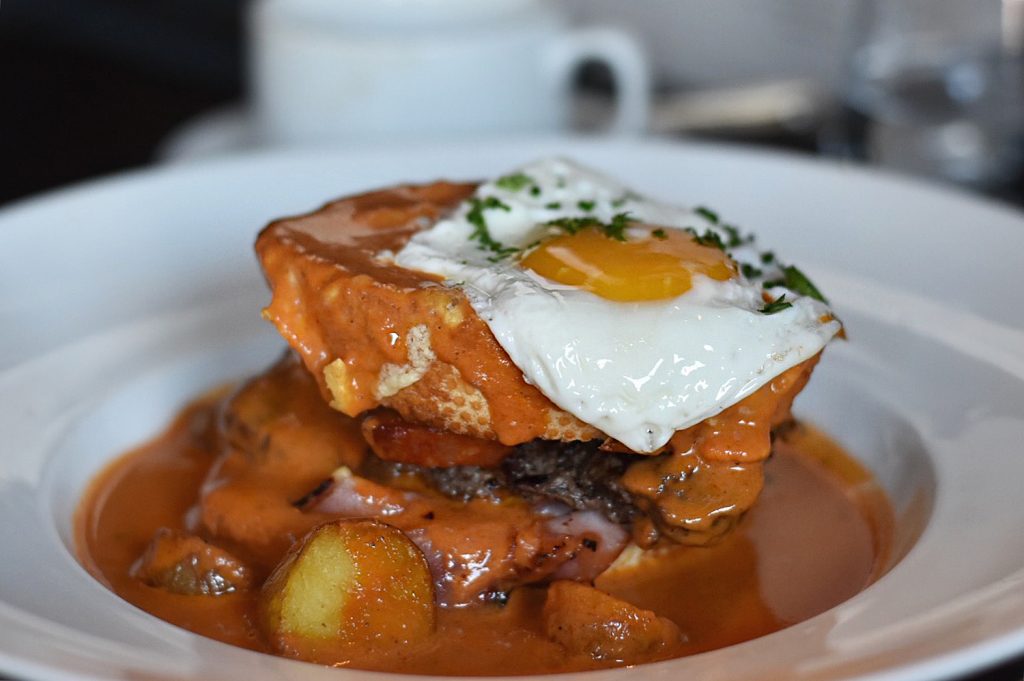 And Mike and Marcel both tried the Francesinha Portuguese baked sandwich with edam, sausage, ham, beef tenderloin, chorizo, fried egg and a special sauce ($15). The review from both of the boys was that this was a very hearty sandwich, and the beef tenderloin was an especially nice and totally satisfying touch. They basically slurped up the sauce too, which Mike said was tomato-soup like, and amazing. 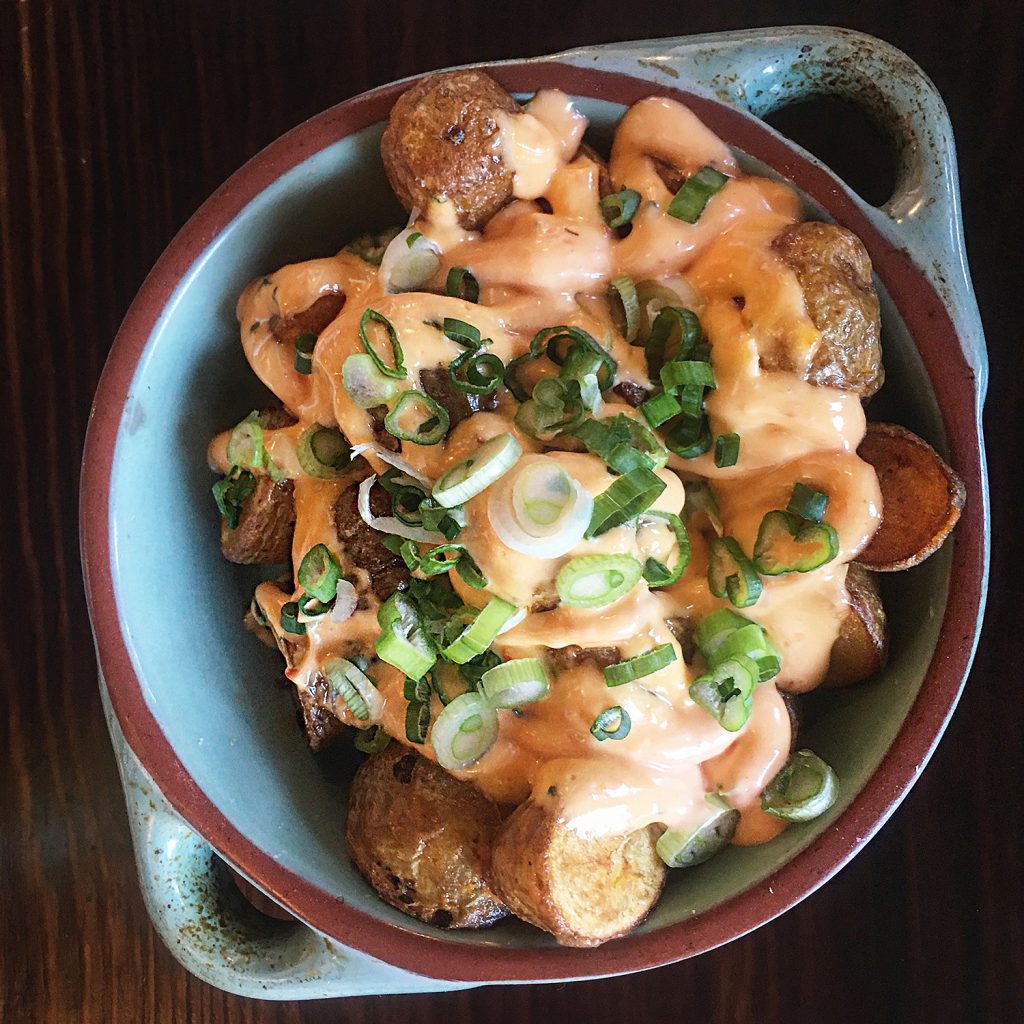 These $6 Patatas Bravas are a must order.

There’s some select tapas you can order during brunch hours too, so Mike and I obviously had to get the Patatas Bravas fried potatoes with spicy garlic aioli ($6) and Roasted Pork Belly ($9)! 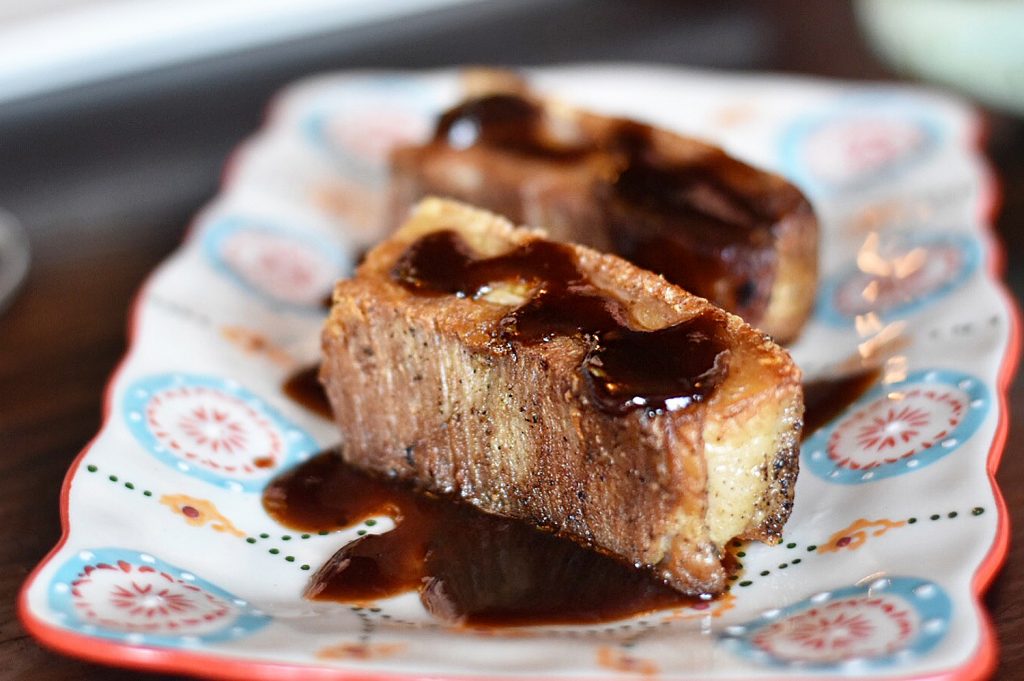 Get in my belly pork belly.

Very crispy pork belly, and flavour-packed, delicious potatoes (however there only two pieces of pork belly for the $9 price, which isn’t as good value as Bodega’s other tapas selections, which I discuss below!) 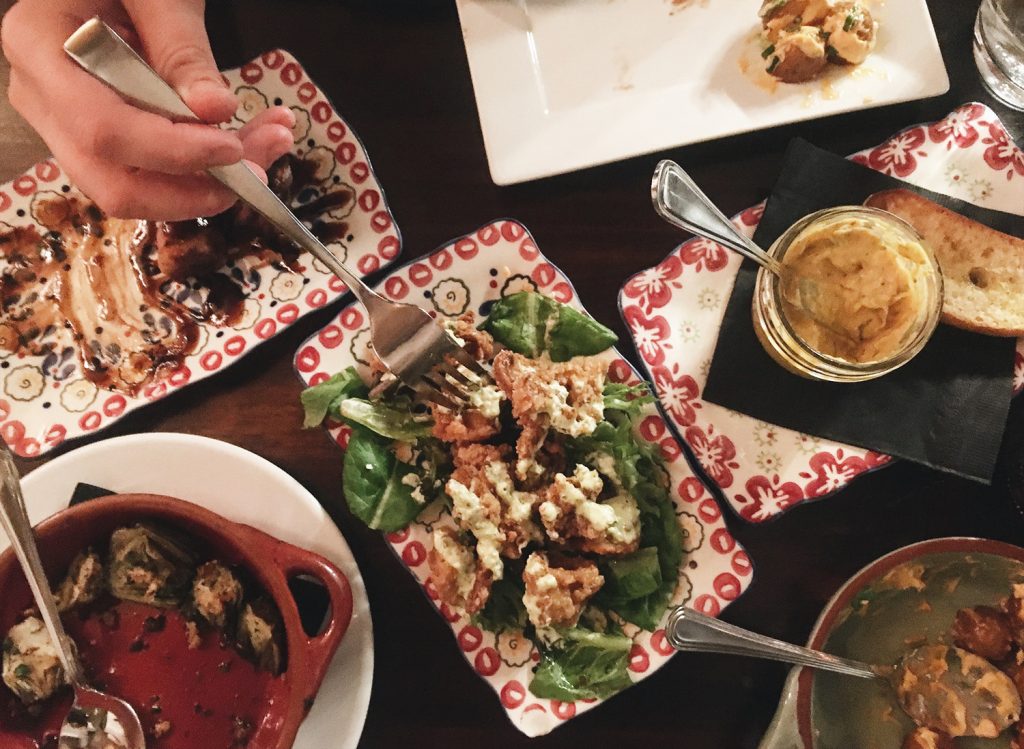 For Bodega dinner, my friend Gina and I shared a bunch of dishes!

That’s what I love about tapas, you can order so many different things, and get a great variety of food, lots of different textures and flavours. 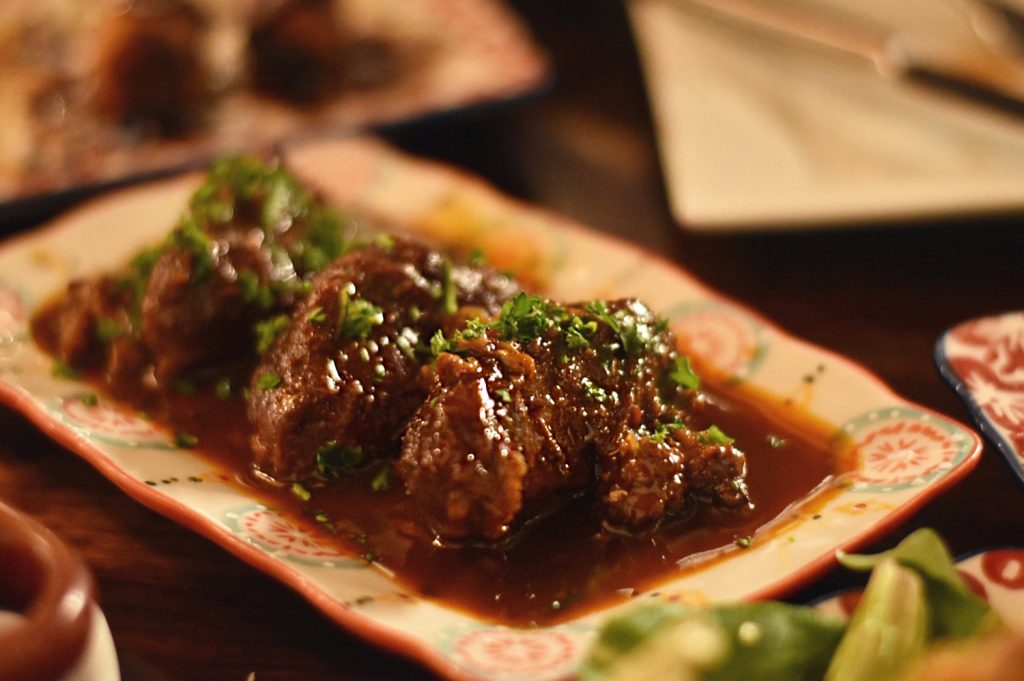 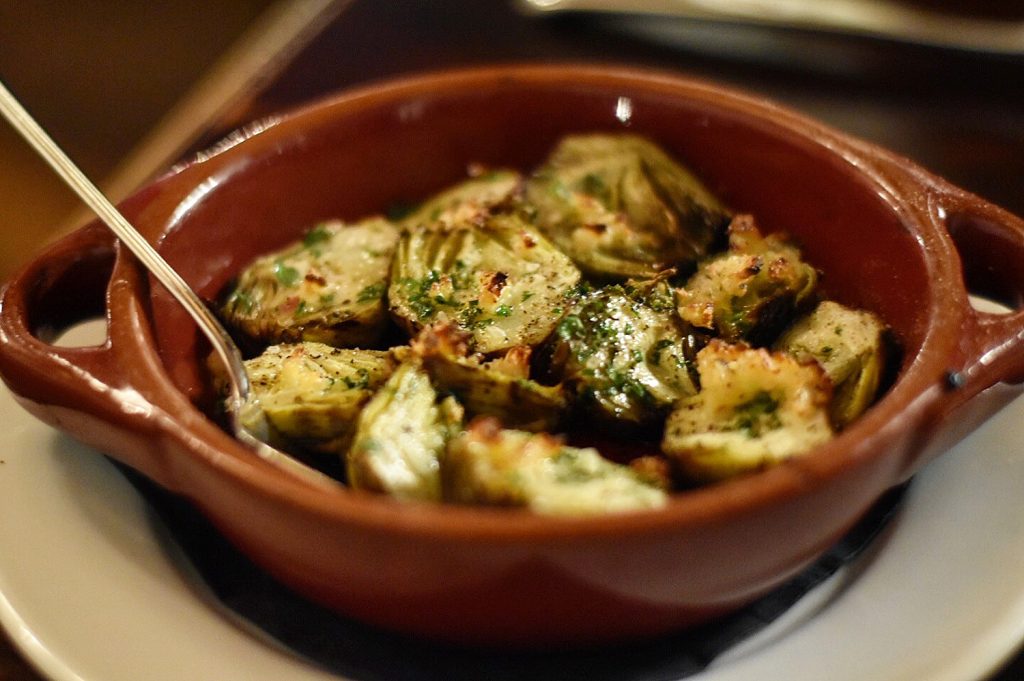 We tried Bodega’s Grilled Baby Artichokes (which are quite possibly my favourite artichokes in the city!), Patatas Bravas (again, because they were so good at brunch I couldn’t pass them up at dinner) and Eggplant Spread (we put heaps of the spread on our crostini- staff was sweet to offer us more crostini too!). 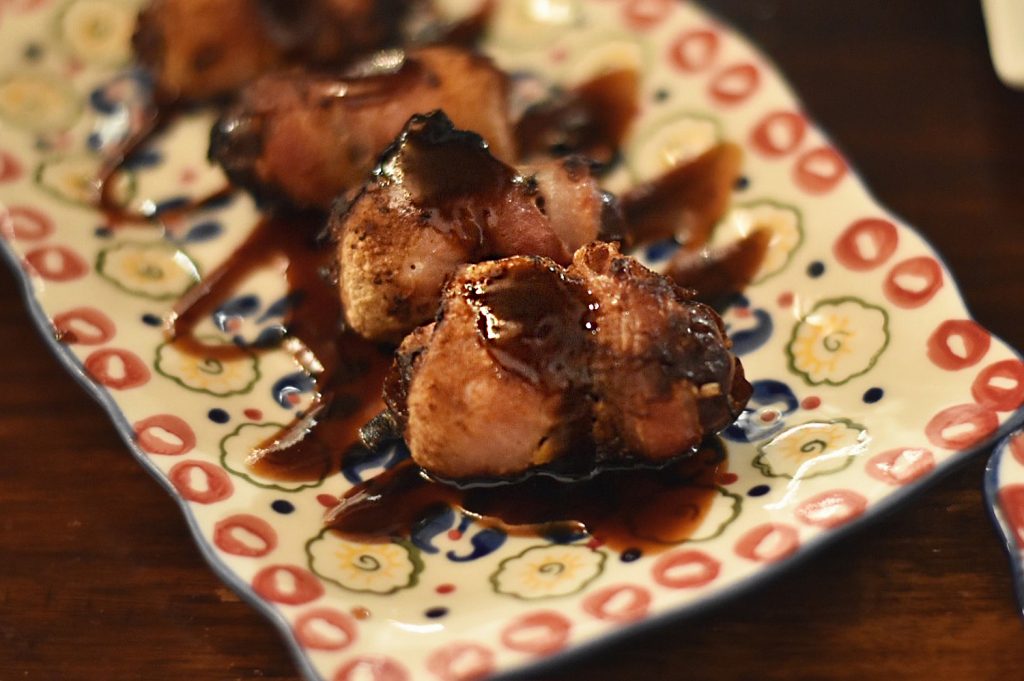 We also had the Bacon-Wrapped Dates with Manchego Cheese (a perfect blend of sweet and savoury), Braised Boar Cheeks (which were very tender and flavourful, though perhaps a touch too salty) and Fried Piri Piri Dusted Calamari (which was pretty good but actually probably my least favourite of the rest of the dishes, which I thought were all stand-out!) 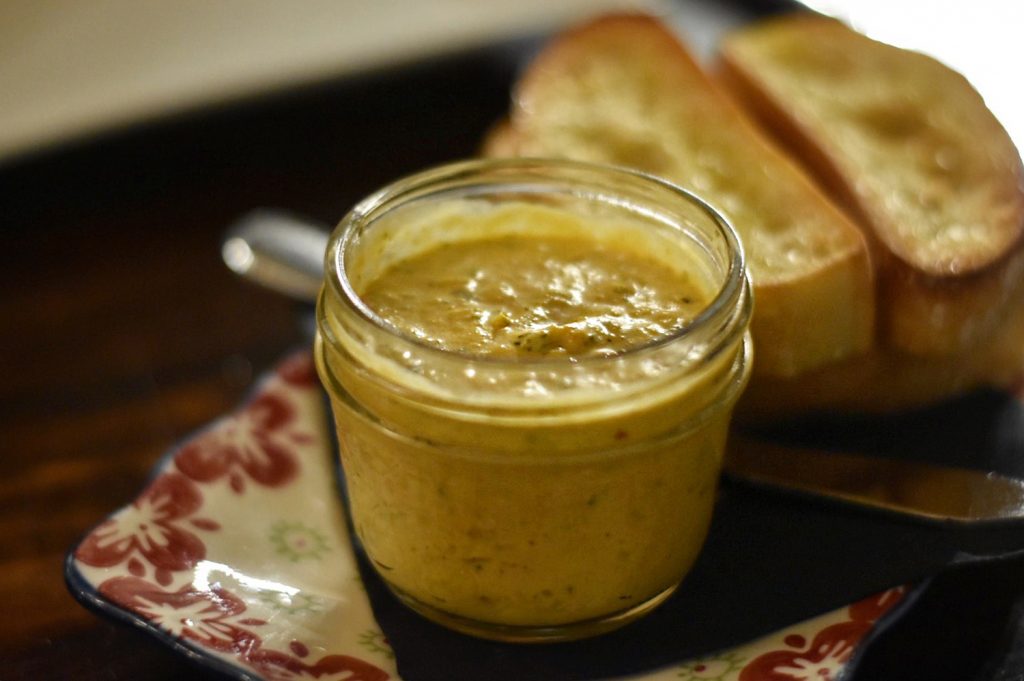 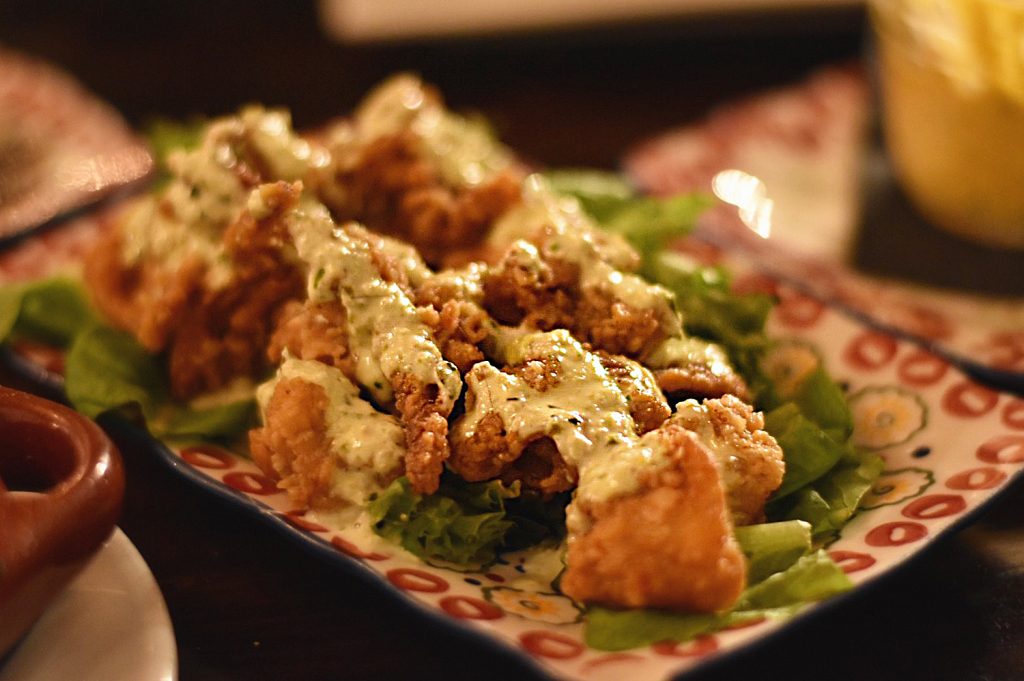 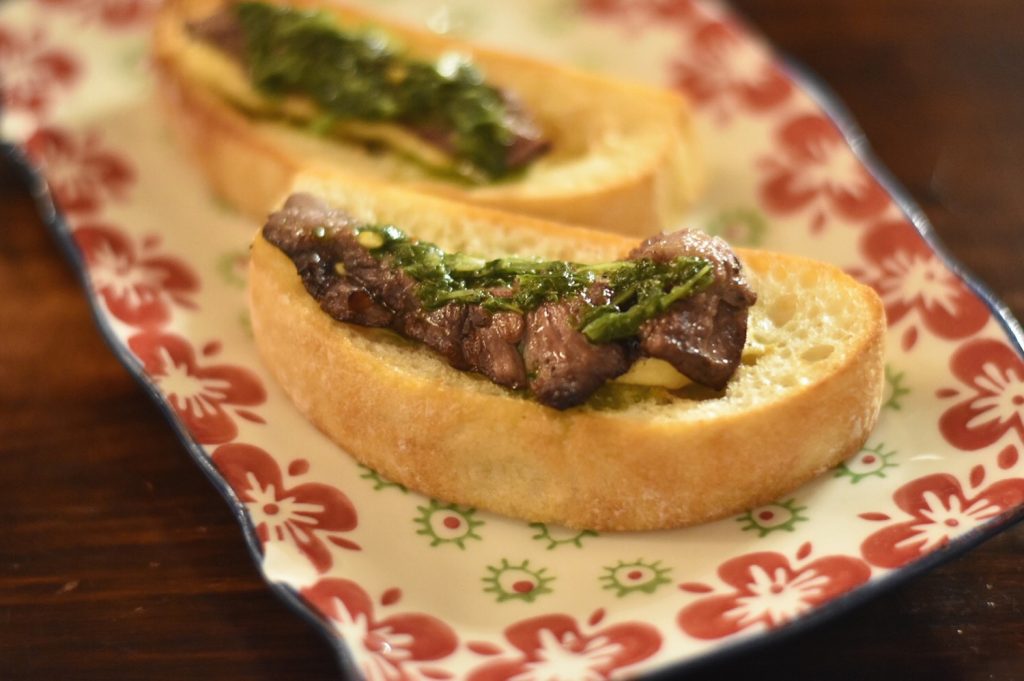 Angus Skirt Steak with Chimichurri ($12, but this was complimentary for Happy Hour!)

We absolutely loved our meal! Everything was so good, and for the most part, I thought the portion sizes were very fair. Out of all the tapas I’ve tried there, the pork belly we had at brunch seemed like the smallest portion for the price (two pieces for $9) but some of the other tapas, like the braised boar cheek (four pieces for $9), bacon-wrapped dates with cheese (four pieces for $8), and grilled artichokes (many pieces for $6) felt like great value.

We didn’t have the charcuterie board but I *love* charcuterie and have had it during previous Bodega visits so wanted to include that in this post as well as a great order if you were leaning more towards charcuterie and bigger plates (which they do offer – including paella and risottos). 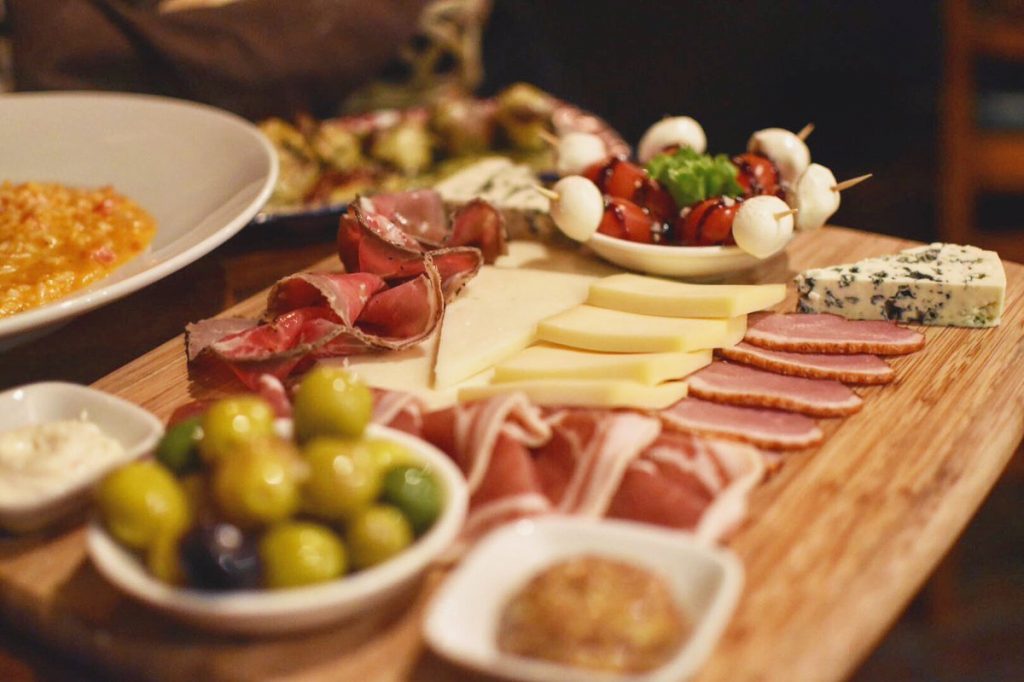 Most excellent board at Bodega.

Side story (to show just how much people love Bodega): While I was waiting for Gina at dinner, this sweet old man named Bob started talking to me about how much he loves the restaurant! Bob told me he visits Bodega Highlands 2-3 times a week and doesn’t even live in the neighbourhood! He loves it that much.

Regulars are the best.

Whereas with typical Spanish tapas you go into the meal with the expectation that you’ll be sharing small plates, with brunch, at least at Bodega, the individual portion sizes are quite hefty so no need to share those!

In terms of service, anytime I’ve been to Bodega, the service has been stellar. Both locations have great vibes, and the Highlands location in particular has a really cozy feel to it. (It’s a very cute brunch spot!)

In terms of space, both Bodega locations aren’t massive but Bodega Highlands is certainly larger, with a lovely backyard patio too.

I should also add that Bodega’s wine selection is stellar, but as I don’t drink wine – that plus is lost on me (but not for wine lovers! Gina loved the red wine she was recommended. I couldn’t tell you what it was called though lol). 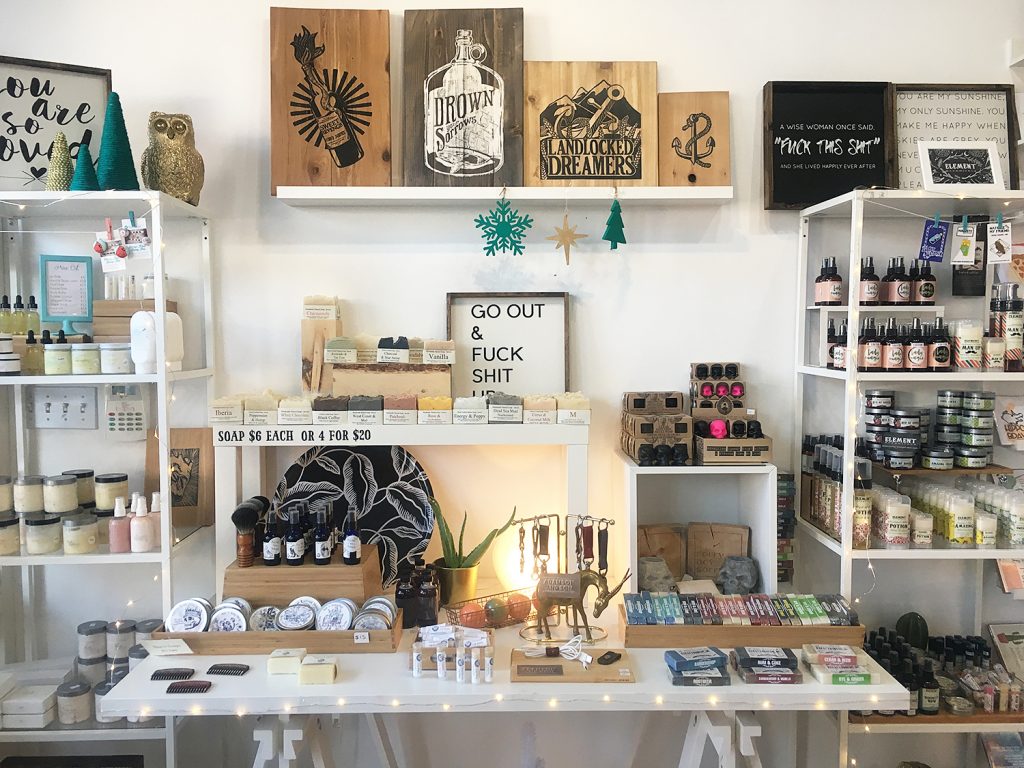 Before or after brunch – visit Majesty and Friends!

If you’re at the Highlands location, you should spend a bit more time in the lovely neighbourhood. Visit Majesty & Friends, a local boutique shop that carries a lot of awesome products like cute cards, Edmonton clothes, soaps and more, and Mandolin Books, a used book store that’s been in the neighbourhood for over 15 years (since i was a junior high school student in the area!)

There’s a lot of brunch and tapas spots in town but Bodega ranks up high in both of these categories, with awesome food, atmosphere, service, and solid price points.

I was pleased my half of my dinner with Gina was just $23 – for all those dishes we tried! If you go during Happy Hour you also get a complimentary dish from chef! And for brunch – all the mains are $15 (and as I mentioned, big portion sizes!)

So have you been to Bodega?

What did you think?

Linda Hoang is a Canadian blogger based in Edmonton, Alberta, who writes about travel, food lifestyle and pet topics. She's also a seasoned social media/digital strategist with a journalism background. Linda loves exploring the world with her husband Mike, eating their way through cities, supporting local businesses, and photographing Instagrammable Walls. She is the founder of the Edmonton International Cat Festival and a fur-mom to two cats and two dogs.
PrevPreviousSocial Media Podcast: Don’t Call Me A Guru
NextHow to Adult: 3 Investing Tips (ATB Financial)Next