* This review is part of a 2015 series of reviews on restaurants in Edmonton’s Chinatown! Check out other reviews in my Edmonton Chinatown Series here! (wanted to include this post even though I reviewed this in 2013!) also, as a family plug: do consider visiting King Noodle House Pho Hoang, my family’s restaurant, as a Chinatown option too! * 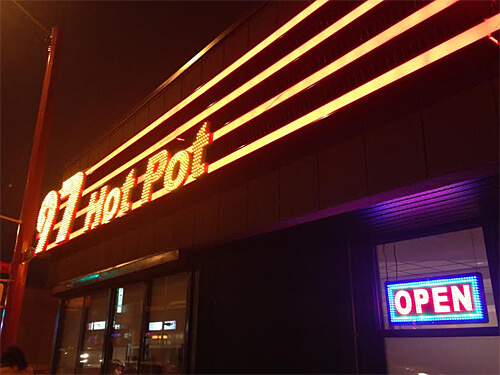 On Christmas Eve Mike and I went to an early dinner with my brother and mom at the new hot pot restaurant that just opened on 97 Street and 106 Ave (Chinatown strip). I noticed the new signage being put up a few weeks ago, finally replacing the space that had been empty (former grocery store) for quite some time. It’s right across the street from my parents’ restaurant so I was very excited to try it! 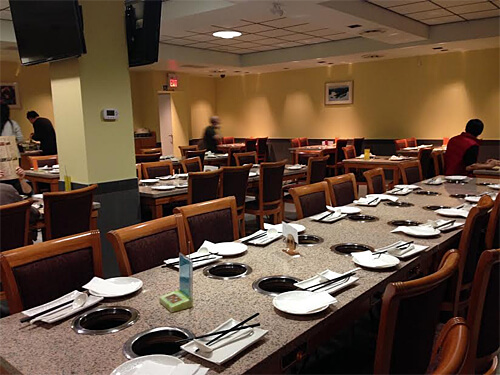 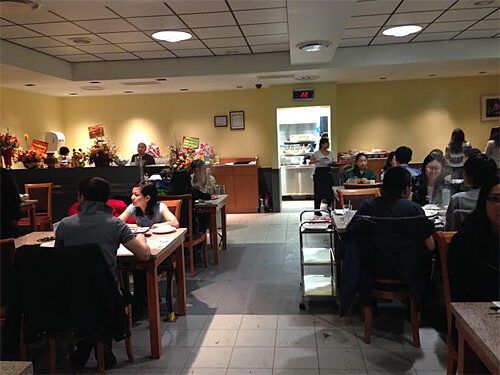 It filled up pretty quickly after that – People love their hot pot! The owner said they had just officially opened the Saturday before (Dec. 20). We found the service to start off was quite slow. We were helped by three different people and they all started by speaking to us in Chinese so we had to repeat three times we aren’t Chinese, English please lol. So while it started off a bit rocky, it definitely went up from there! 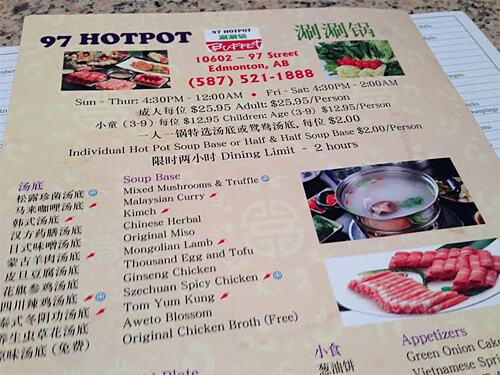 The all-you-can-eat price per adult at 97 Hot Pot is $25.95, kids $12.95. They have 12 different soup bases to choose from. Everything except the chicken broth costs an additional $2. There are about 100 items on the menu broken into categories such as cold plates, appetizers, meat, mash, seafood, noodles, and vegetables. Everything on the menu is included in the $25.95 price (unlike at Urban Shabu, the other new-ish hot pot spot on the Chinatown strip where certain items cost additional money). 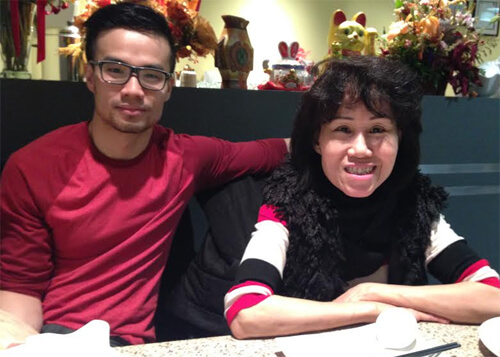 With my brother and mother (Mike not pictured) at 97 Hot Pot.

My mom and me are big hot pot fans whereas Mike and my brother Oscar are not. Mike’s main reason for not liking hot pot is that he’s always had to share a pot with me the few times we’ve eaten it together. He doesn’t like most seafood so he doesn’t like that I was “contaminating” his broth with seafood lol. Not the case at 97 Hot Pot! 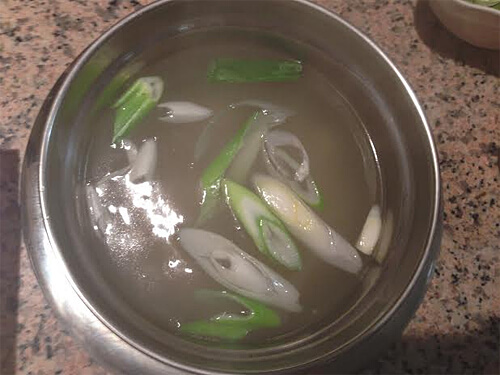 Each person gets their own individual pot. Mike got the chicken broth, I got the Tom Yum broth, my mom got the Mixed Mushroom & Truffle and Oscar got the Original Miso. I had a taste of all the broths and thought they were excellent. I’d be happy to just get a side of broth to slurp up! 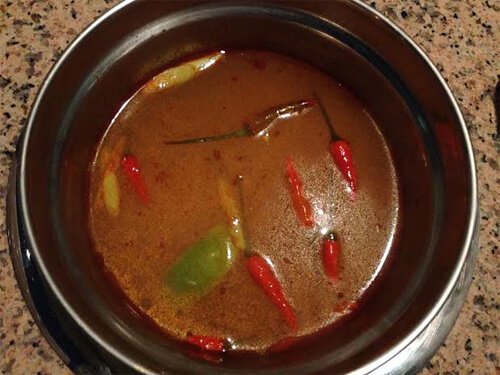 You order menu items off a sheet by marking down quantity of what you want. This is also very similar to Urban Shabu and also similarly confusing. You can put down “1” for sliced beef (of which they have several kinds) and then get a heaping plate of sliced beef but you put down 1″ for the meatball section and you will literally get one meatball, lol. 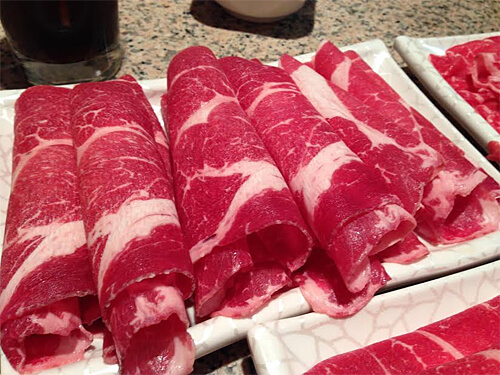 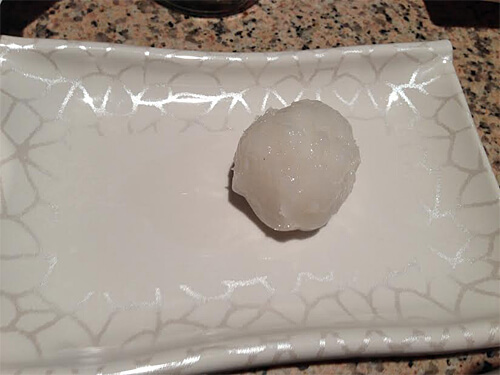 They have a separate sauce station that is typical for your hot pot place. I loaded up on sate, sriracha and soya sauce. 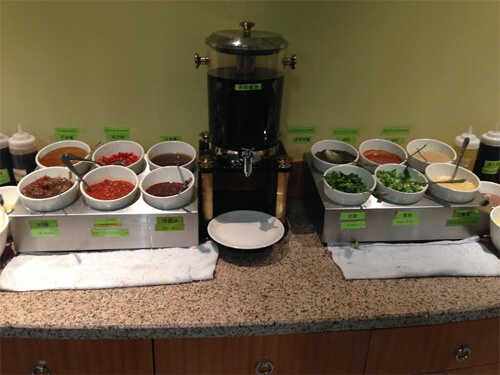 The pots got hot very quickly! There are three heat temperatures lowest 1 highest 3 and even on 1 the broth boiled quite quickly. Mike counted how fast it boiled on 3 and it only took 8 seconds. 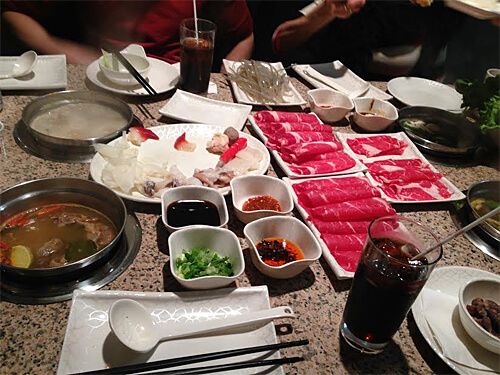 Getting our hot pot on at 97 Hot Pot.

There’s lots of variety on the menu. We ordered a ton of beef and pork, various seafoods, noodles and vegetables. You can order as many times as you want. 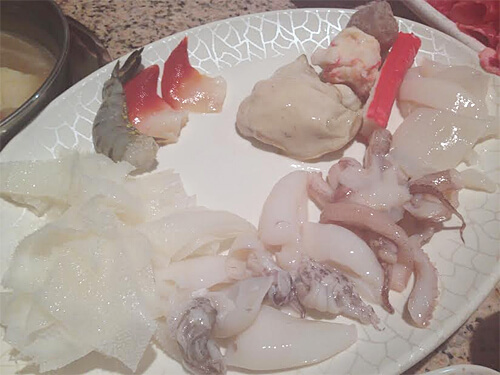 Some seafood at 97 Hot Pot.

Service was excellent after the initial slow start. We were offered water and broth refills several times and staff came around to pick up empty plates regularly. 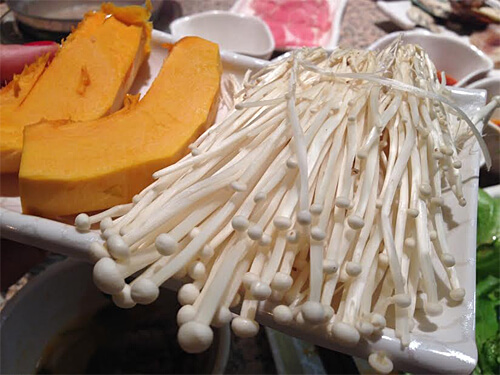 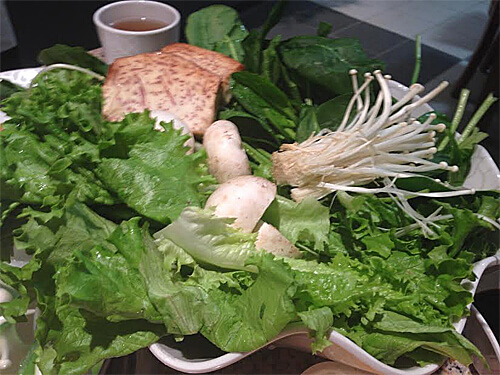 Overall I really enjoyed 97 Hot Pot! The location is excellent. I love that it’s right across from my parents’ restaurant. The price is on par with most hot pot places (and cheaper than it’s nearest competitor Urban Shabu). The service was great (slow start but after that it was fine). There’s tons of variety and the different broth bases to please everyone. Mike is a big fan of the individual pots. He only had good things to say about 97 Hot Pot and would be back, which is a pretty great review from him!

See my hot pot egg Vine!
(I had issues embedding it into this post lol)

97 Hot Pot is a welcome addition to the Chinatown strip. It’s bright signage really makes the area seem livelier which it definitely needs – and the fact that they’re open so late is also a welcome feature. Like downtown Edmonton, a lot of the times the area empties out quite quickly after dark so having this attractive bright signage/restaurant open late will be great for keeping people around.

I will be back! It was great.

So have you been to 97 Hot Pot? Will you try it! Let me know what you think.

Linda Hoang is a Canadian blogger based in Edmonton, Alberta, who writes about travel, food lifestyle and pet topics. She's also a seasoned social media/digital strategist with a journalism background. Linda loves exploring the world with her husband Mike, eating their way through cities, supporting local businesses, and photographing Instagrammable Walls. She is the founder of the Edmonton International Cat Festival and a fur-mom to two cats and two dogs.
PrevPreviousMerry Christmas!
NextSocial Media Notes (#11) – Links for the Week of Dec. 23-29Next