A few weeks ago I was invited to come try and learn more about the Westin Hotel’s Share Restaurant new – very Canadian menu and Chef’s Table.

Share is well-known, downtown Edmonton hotel restaurant that’s recently gotten a lot of attention because of their extremely talented executive Chef Ryan O’Flynn. Chef Ryan has had a whirlwind of a year – winning gold at the 2015 Canadian Culinary Championships. His winning dish was a pine-wood smoked terrine of Sturgeon and Quebec foie gras, a dish that – beginning July 16 – will be available on Share’s new menu. 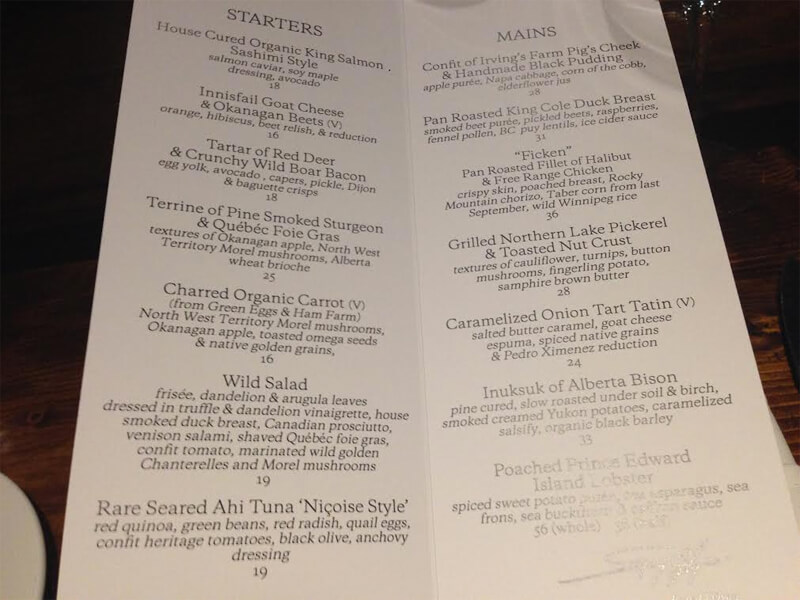 The Westin is really letting Chef Ryan run with his creative ideas on this new menu. Nasser Nammari, the Westin’s Director of Food and Beverage, says since the Westin’s got the best chef in the city (literally – he won Gold Medal Plates in Edmonton, then beat out the best chefs across the country), they wanted to do something different and let Ryan and his team have fun with their cooking. Alberta is very much beef and potatoes, and while some restaurants and some chefs choose to celebrate that (and there’s nothing wrong with that), Chef Ryan says he doesn’t want to be in that scene.

“We don’t need another steak house in Edmonton we need different, funky stuff,” Chef Ryan says. It’s a bit refreshing – that a lot of the dishes on this new menu are new even to him – and that he’s trying some really interesting cooking methods (for some preparations – ancient, Aboriginal cooking techniques). It’s also a bit refreshing that Nasser and his team are giving Ryan the freedom to experiment and try these unique, not necessarily going to sell-out food concepts and dishes, at the restaurant. 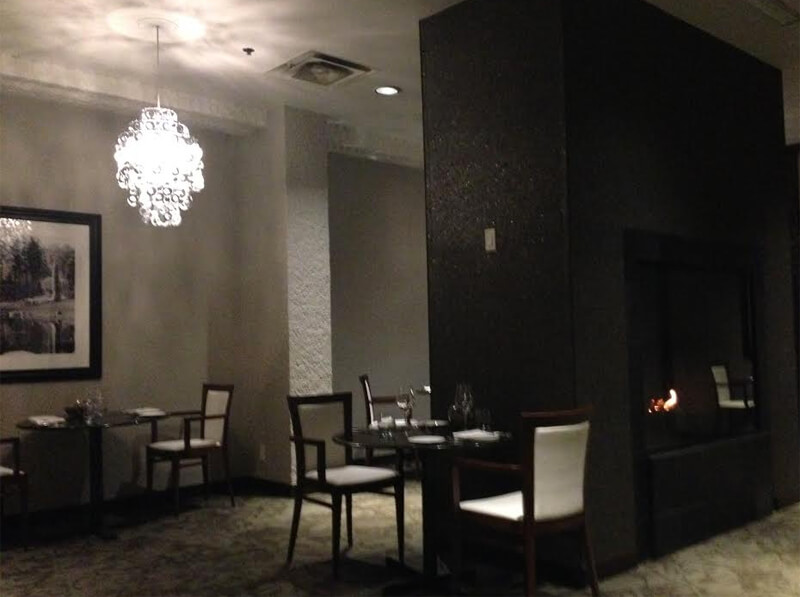 The prices are on the more expensive side, most people wouldn’t be coming here for dinner all the time. Starter prices are in the $16-$25 range while entrees are in the $25 – $36 range (up to $56 for a whole poached Prince Edward Island lobster). There’s also a new Chef’s Table offering. For those who don’t know, a chef’s table is generally a special table at restaurants where customers are served several, tasting size courses prepared and served by the restaurant’s head chef. It’s quite an experience – drawn out throughout the evening, and is meant to be very special. It’s also generally very expensive.

Westin’s Share Restaurant Chef’s Table will have a few different levels of pricing – their lowest costing $80 per person (minimum six people). Three wines would be included in the $80 price, along with a number of courses that are created by Chef Ryan in consultation with you. I think that part is really cool – Ryan says for those who book his Chef’s Table, he will consult with you to create a truly “you” / unique dinner. So I think at the very low end of the tier, you get quite a bit for what you pay (but obviously Chef’s Table isn’t something most people would be able to afford all the time. Definitely a special occasion kind of thing – anniversaries, birthdays, celebrations!). Once a month they plan to sell a Chef’s Table off for charity as well, which is great. 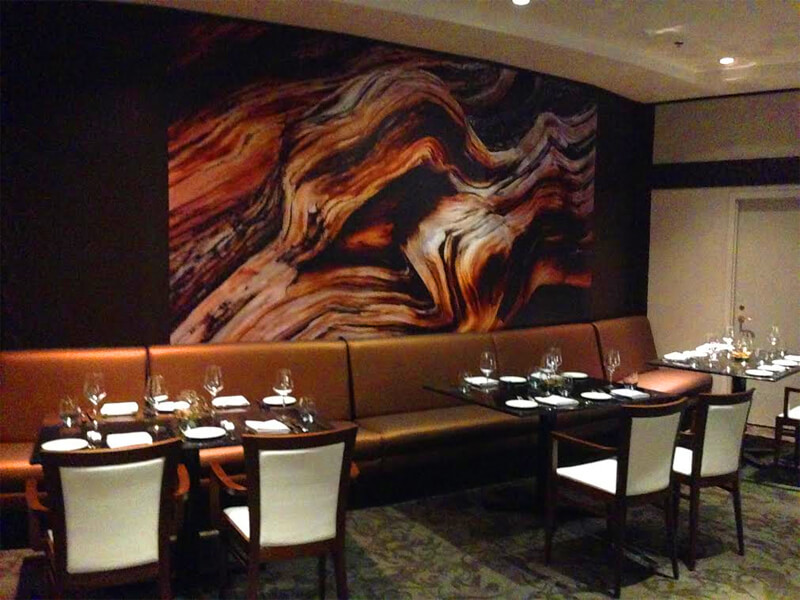 The new menu and Chef’s Table goes hand in hand with Share’s new look. The restaurant has gotten a big makeover. I regret to say that I had not been inside Share pre-renovation, but I’m told that the look and feel is a lot different than before. It’s much more slick and modern, with lots of black. 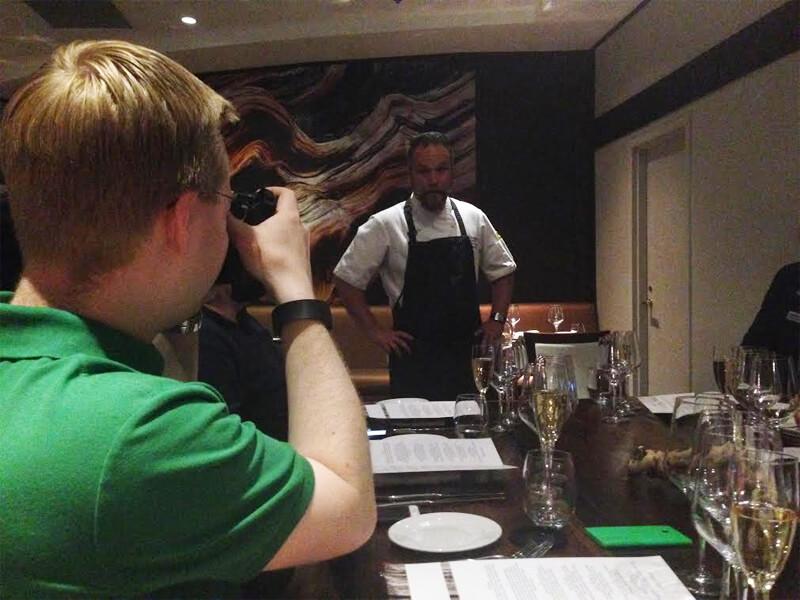 Mack taking a photo of Chef Ryan as he tells us about his new, very Canadian menu.

Everything – the new look, menu, Chef’s Table, encouraging Chef Ryan to go nuts with creating really unique, delicious dishes, are all part of the hotel’s efforts to redefine the “hotel restaurant.” Hotel restaurants are dying – Nasser and Chef Ryan both say – and they’re switching gears to revolutionize the genre: putting a lot of emphasis on presentation and experience to up Share’s reputation (and really, showcase why Chef Ryan is one of the country’s best chefs).

We started the night with bannock bread, made with purple and green corn ground into flour. It features birch syrup from the Yukon. Fun fact: the syrup costs $380 a litre – wow! We made sure we drank up all the syrup so that money didn’t go to waste. ;) 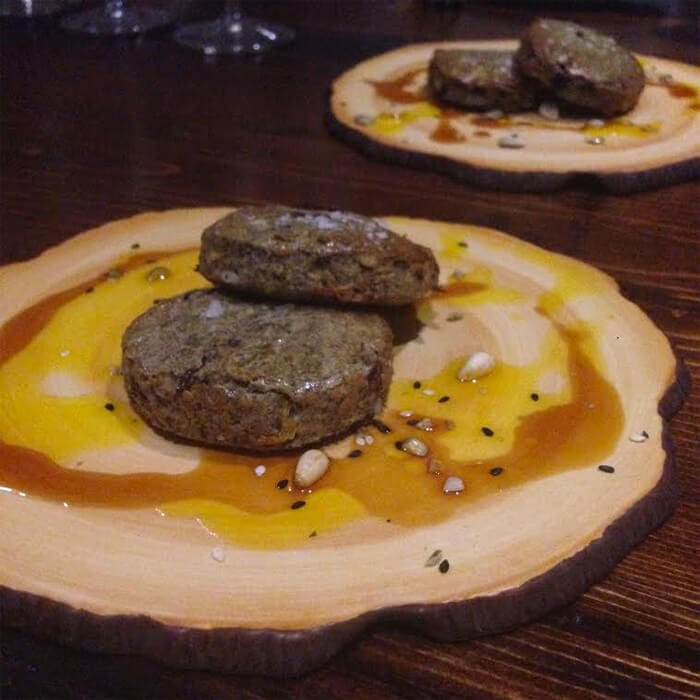 Bannock and syrup at the Westin Hotel’s Share Restaurant.

Next up was a sashimi-style slice of King Salmon with ethically farmed organic fish eggs, avocado puree, and maple soy and lime sauce. The normal portion would feature three of these tasty slices for $18. 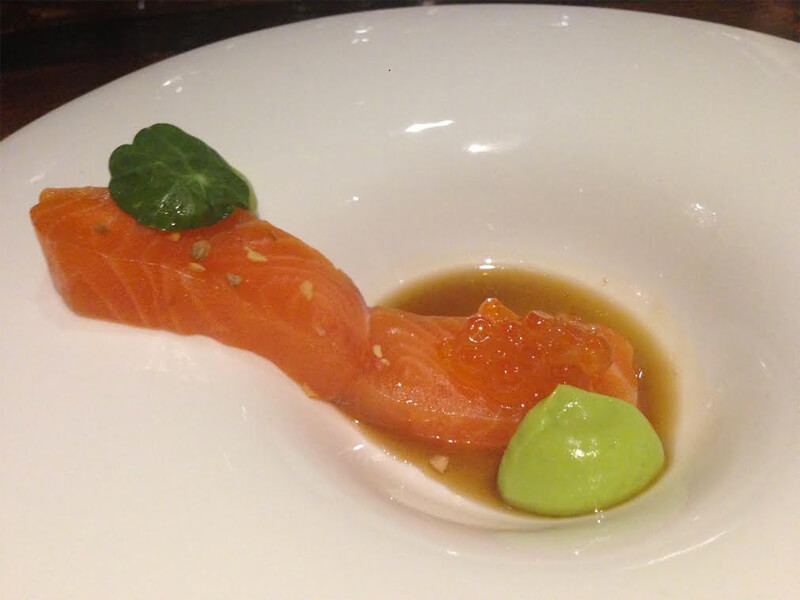 Marinated beet roots and Innisfail goat cheese is a wonderful flavour combo, though I did think the beets were cut a bit too thin. The menu version of this costs $16. 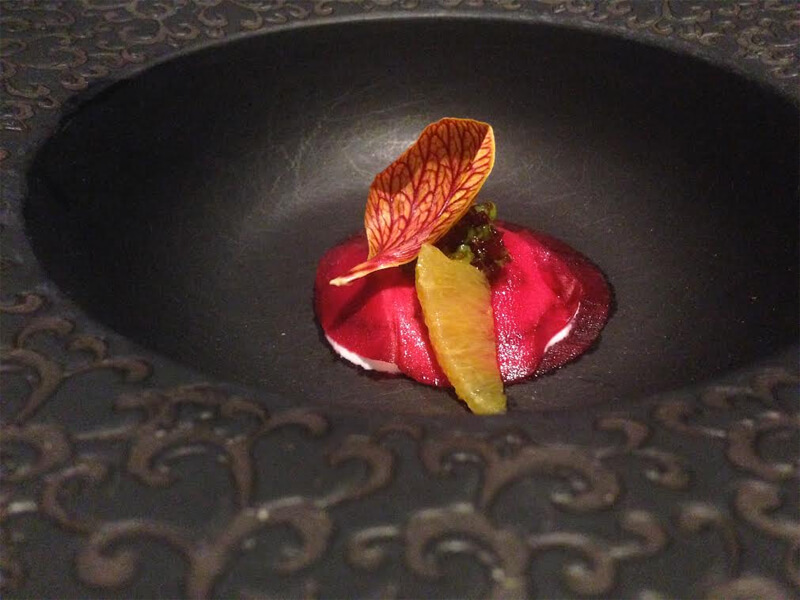 The most anticipated dish of the night was the championship winning terrine of pine-smoked Sturgeon and Quebec Foie Gras ($25 on the menu). It included Okanagan apple and North West Territories Morel mushrooms (damn, I love morels!) and the terrine was smoked from a pine tree that Chef Ryan actually cut down himself. (Honestly, he’s a bit intense. In a good but also intimidating… intense way, lol). 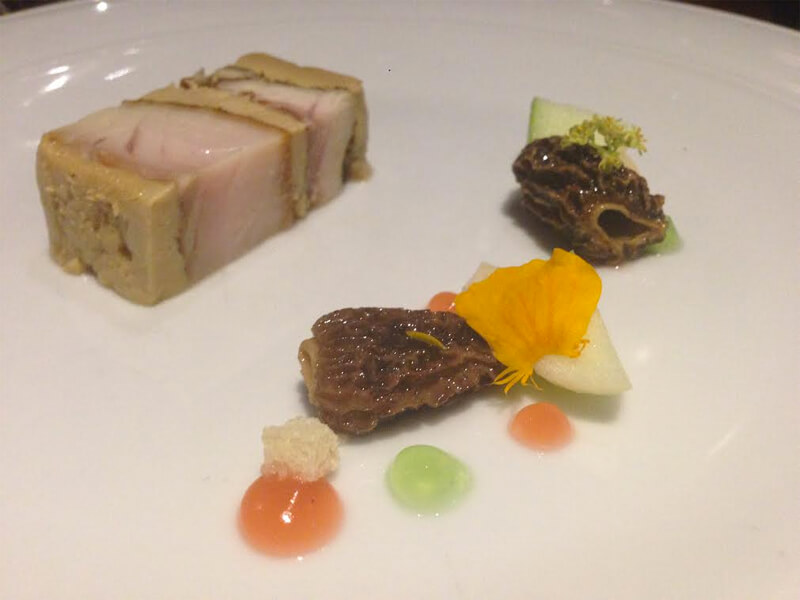 The award-winning terrine of pine-smoked Sturgeon and Quebec Foie Gras ($25) at the Westin Hotel’s Share Restaurant.

The wild salad (with frisee, dandelion and arugula with a truffle and dandelion vinaigrette, house smoked duck breast, Canadian prosciutto, venison salami, shaved Quebec foie gras, tomatoes, and marinated golden Chanterelle and Morel mushrooms – $19 on the menu) was great. I loved the vinaigrette and was also very impressed to hear that all the meats are cured in house. 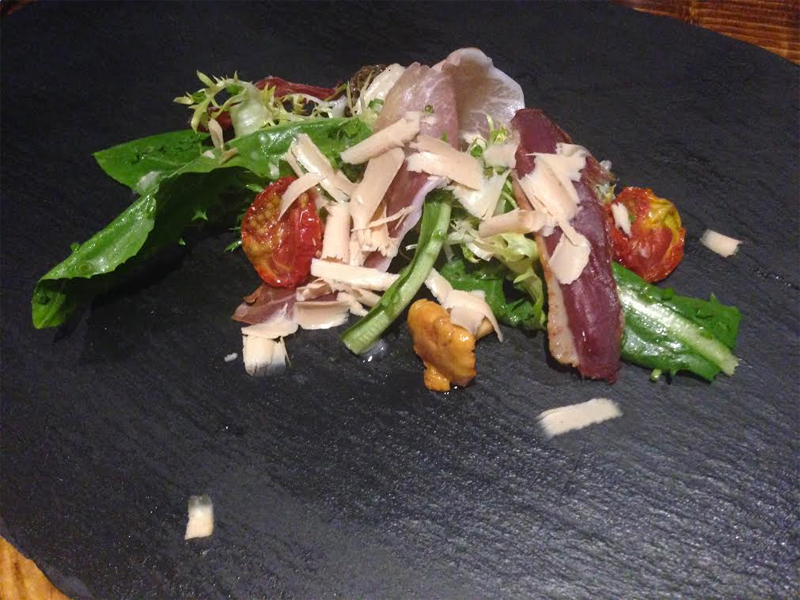 One of my favourite dishes of the night was the grilled Northern Lake pickerel with toasted nut crust, cauliflower, mushrooms, fingerling potato, and brown butter. The tasting size was quite large (or maybe my stomach was getting filled up by all the previous goodness), so I think the portion you get on the menu (which costs $28) would be quite filling. Excellent, flakey, moist. Everything you’d hope for in a fish dish! 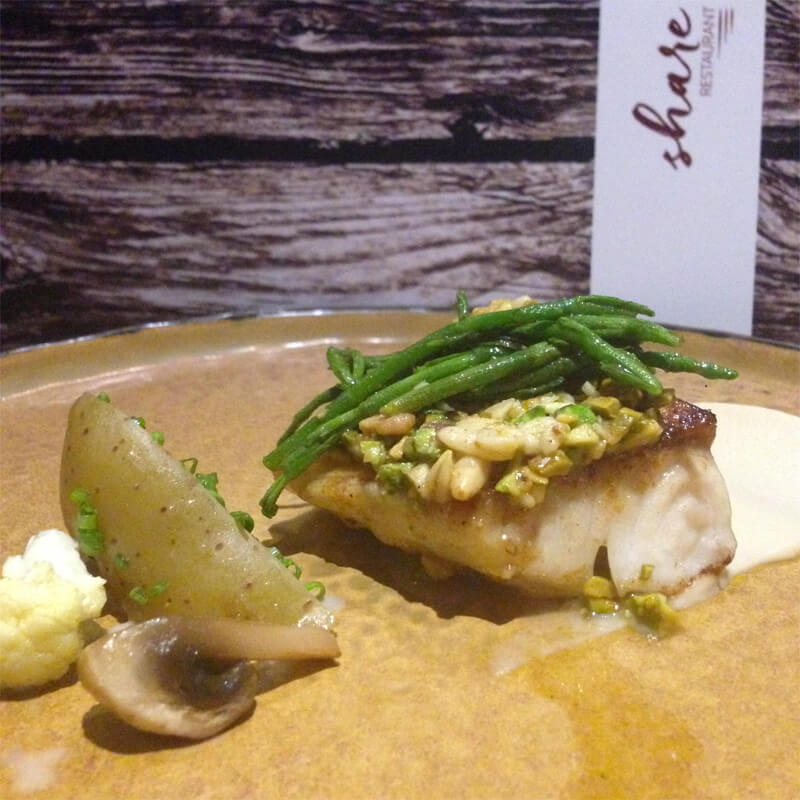 My next favourite dish was the “Ficken” – a free range chicken with a pan roasted fillet of halibut with crispy chicken skin, Rocky Mountain chorizo, Taber corn and wild Winnipeg rice. On the menu it’s $36. I think some people at the table couldn’t really get behind a crispy chicken skin cooked onto the fish but I actually quite enjoyed it – great texture when you combine the crispiness of the chicken and the flakiness of the fish. What’s not to like? (I am also the kind of eater who doesn’t mind when different types of food mix though, I know some people can get weird about that lol). 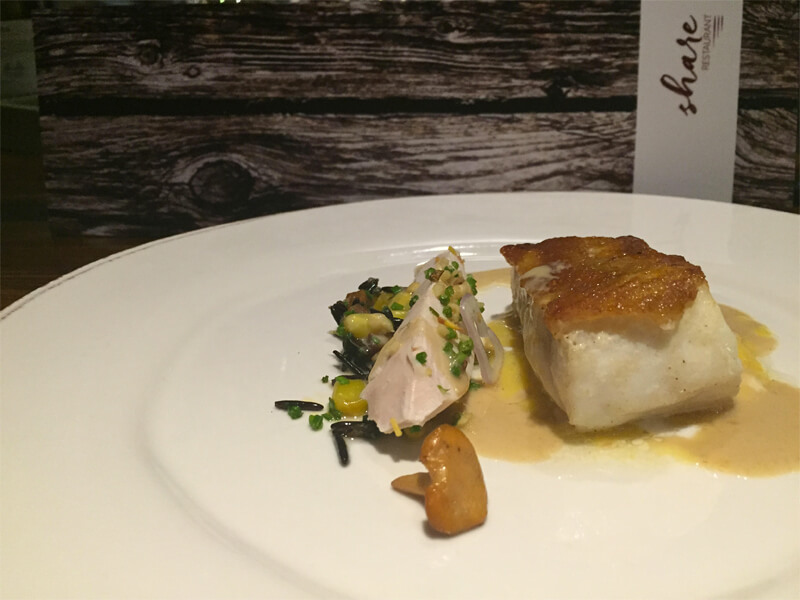 Have you ever tried a “Ficken” before? Halibut with chicken skin crust? Yum! $36 at the Westin Hotel’s Share Restaurant.

At this point we were all starting to move quite slowly – and the other guests at the table had been drinking a lot of wine too (I’m not a wine person, though I did have a sip of the ice wine which I thought was actually not bad) – there was just so much food! That is the beauty of Chef’s Tables – the food seemingly never ends. 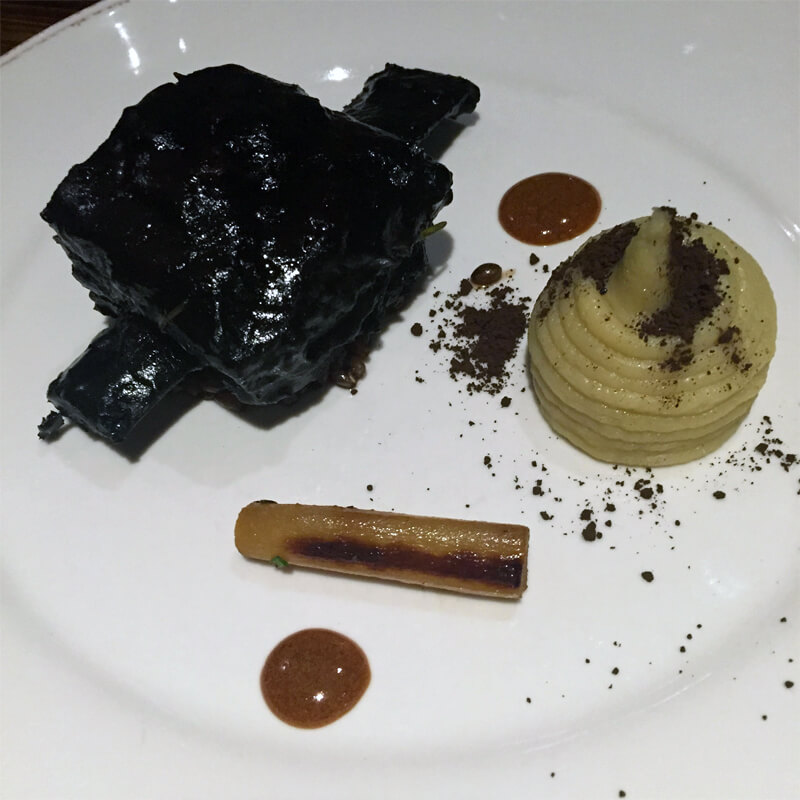 The Inuksuk of Alberta Bison and smoked creamed potatoes ($33) at the Westin Hotel’s Share Restaurant.

Our last savoury dish of the night was the inuksuk of Alberta bison – pine cured (probably with that same pine tree Chef Ryan cut down himself), slow roasted under soil and birch (really), with smoked creamed Yukon potatoes (I wasn’t a big fan of this. Too smokey for my liking), with caramelized, organic black barley. On the menu, it’s $33. 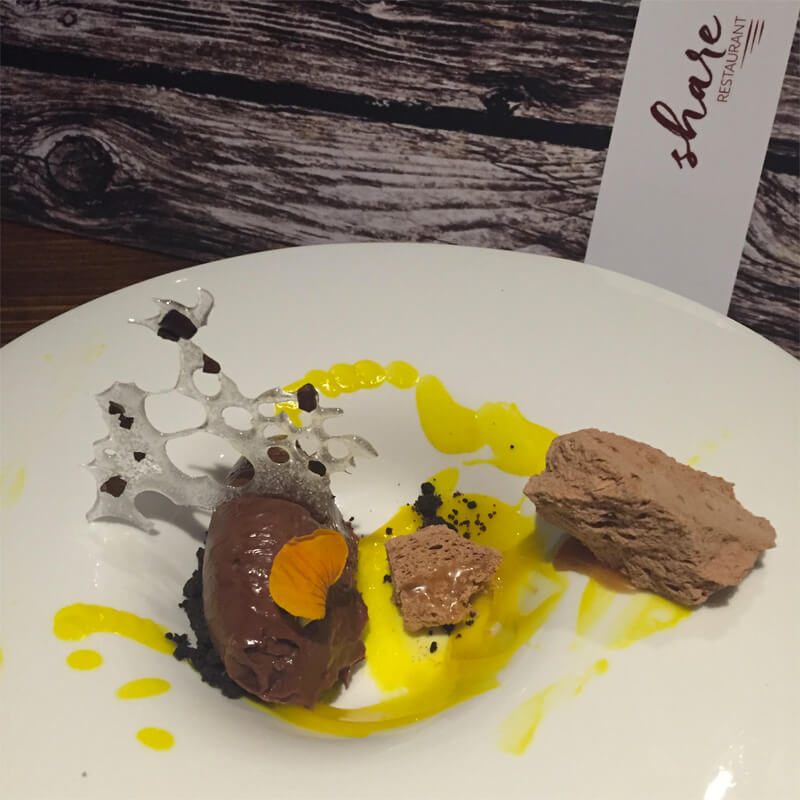 And finally – dessert! I don’t have exactly what it’s called or the price (whoops), but it was good (just a bit on the dense side).

And finally for dessert – dense chocolate “soil” with an inverted sugar crystal. It was a bit too dense for me (but I am not a fan of dense chocolate, brownies are the worst). But it was refreshing, and a great end to an unbelievably filling – and super Canadian – dinner.

For Chef Ryan, his new menu / concept is all about selling the Canadian experience.

When he talks about his food, you know, without a doubt, that he not only knows what he’s talking about, but is so insanely passionate about what he’s doing. The price points are for sure higher, and I would definitely classify Share as a “fancy” spot, but Chef Ryan assures – you won’t be getting tiny portions. A lot of work – blood, sweat, probably some tears (but probably more sweat – he really puts a whole lot of work into it), will have gone into the preparation of the dish you end up eating. It’ll be unique. It’ll be special. Something from every dish will feature a very Canadian ingredient, with as much made in-house as possible. You’ll most certainly get what you pay for.

It’s an ambitious endeavour, but it’s a risk they’re able to take with the safety net of Share being a hotel restaurant. If they’re successful – big win! If they fail – well, as they put it, hotel restaurants are dying right now anyway. He says he’s still experimenting with the dishes, and some may change (maybe even before July 16). But my money is on this whole thing being a success! The dinner was so damn good.

Good luck to Chef Ryan and the entire Westin team. I had such a wonderful dinner, I enjoyed hearing about everything that went into each and every dish, and I can’t wait to come back with Mike!

Linda Hoang is a Canadian blogger based in Edmonton, Alberta, who writes about travel, food, lifestyle and pet topics. She's also a seasoned social media/digital strategist with a journalism background, the founder of the Edmonton International Cat Festival and co-founder of Stop Race Based Hate, an online anti-racism education tool. Linda loves exploring the world with her partner Mike, eating their way through cities, supporting local businesses, and photographing Instagrammable Walls. Linda is a fur-mom to two cats and two dogs.
PrevPreviousSocial Media Notes (#74) – Links for the Week of June 28 – July 5
Next#ComingJuly13 – The New Edmonton #IceDistrictNext