Last week, I had a lot of fun checking out a bunch of new public art that was popping up all over downtown Edmonton!

There was an ice cube installation in front of the Westin Hotel, which was later moved to Beaver Hill Park. Edmonton-based Jennifer Poburan was the artist behind the ice cubes. 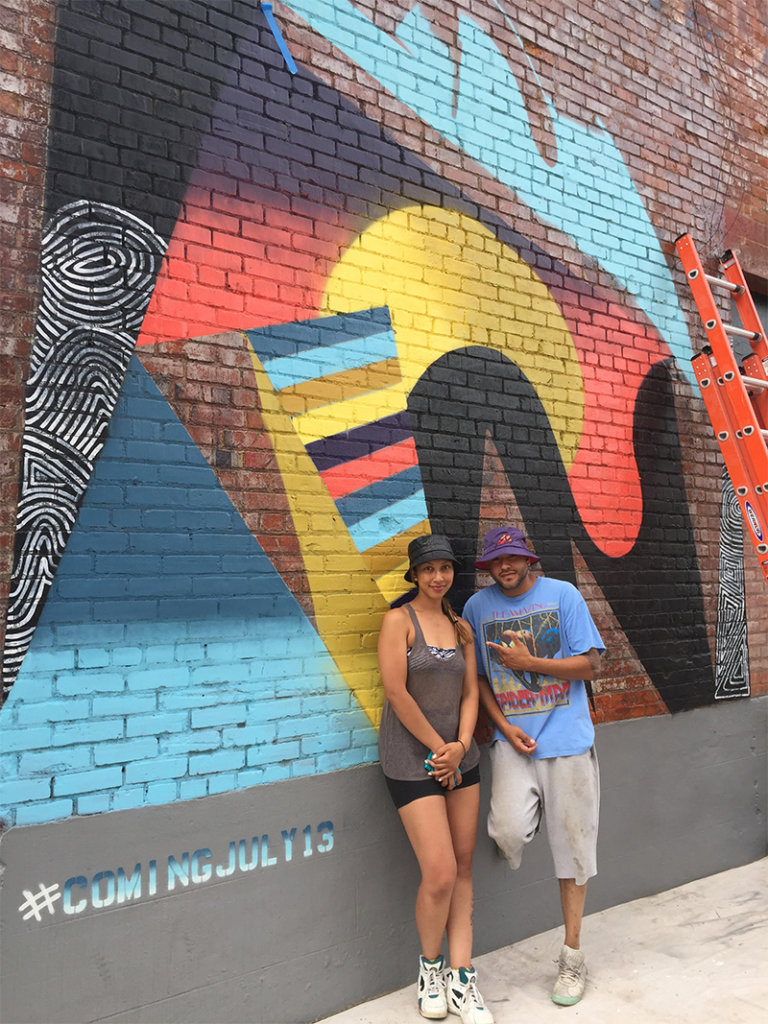 #ComingJuly13 mural on the Mercer Building, by artists Annaliza Toledo and Trevor Peters.

There was a colourful mural painted on the north facing wall of the historic Mercer Building. Edmonton-based graffiti art/muralist team Annaliza Toledo and Trevor Peters worked on that abstract piece. 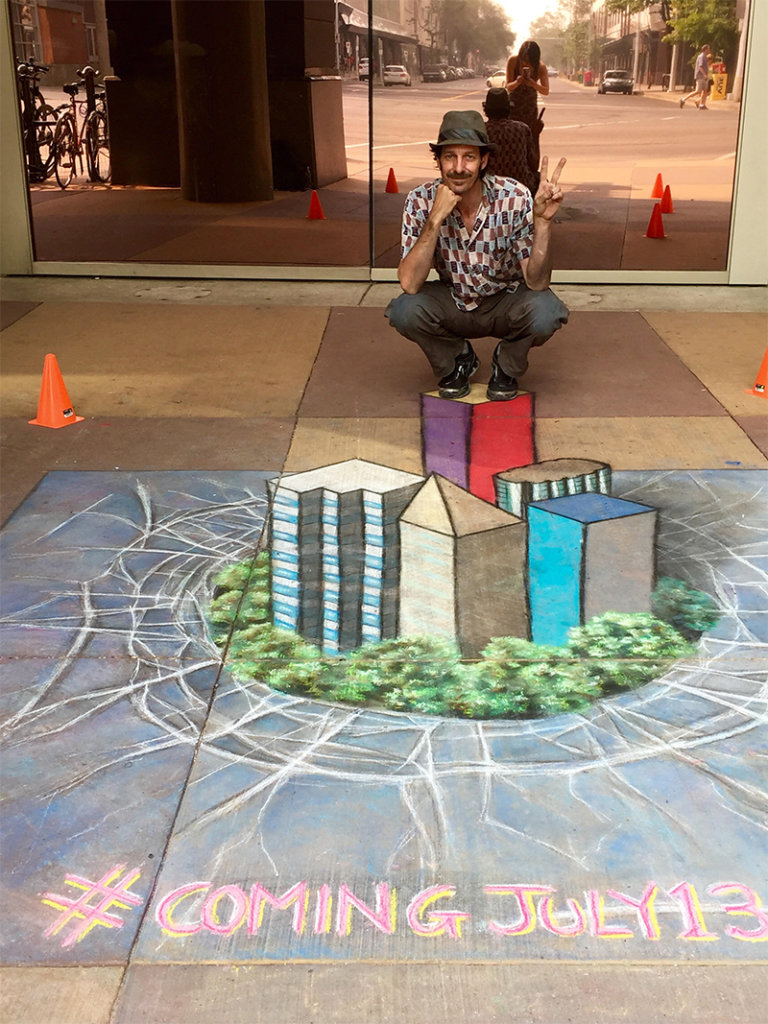 There was the coolest 3D chalk art done on the sidewalk outside of City Centre Mall (my personal favourite piece of all!) 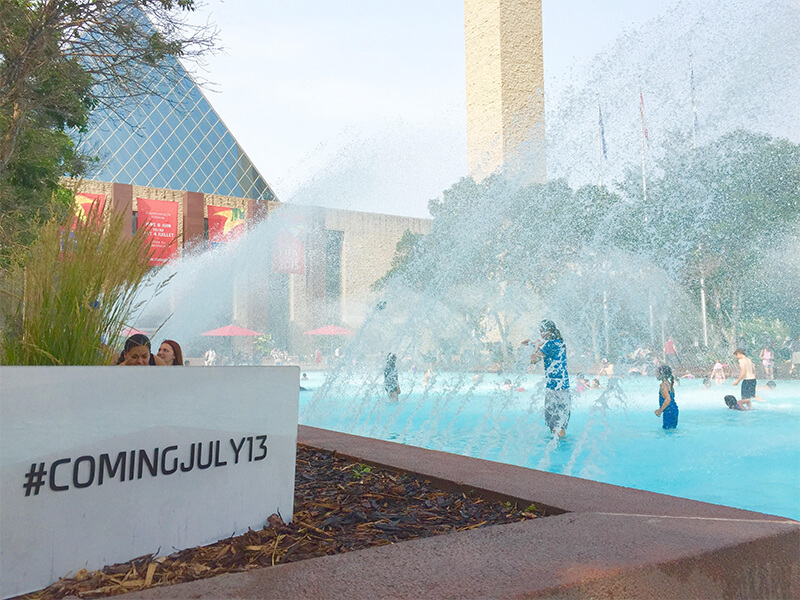 There were also some blocks of ice at Churchill Square, and lit-up text on City Hall. 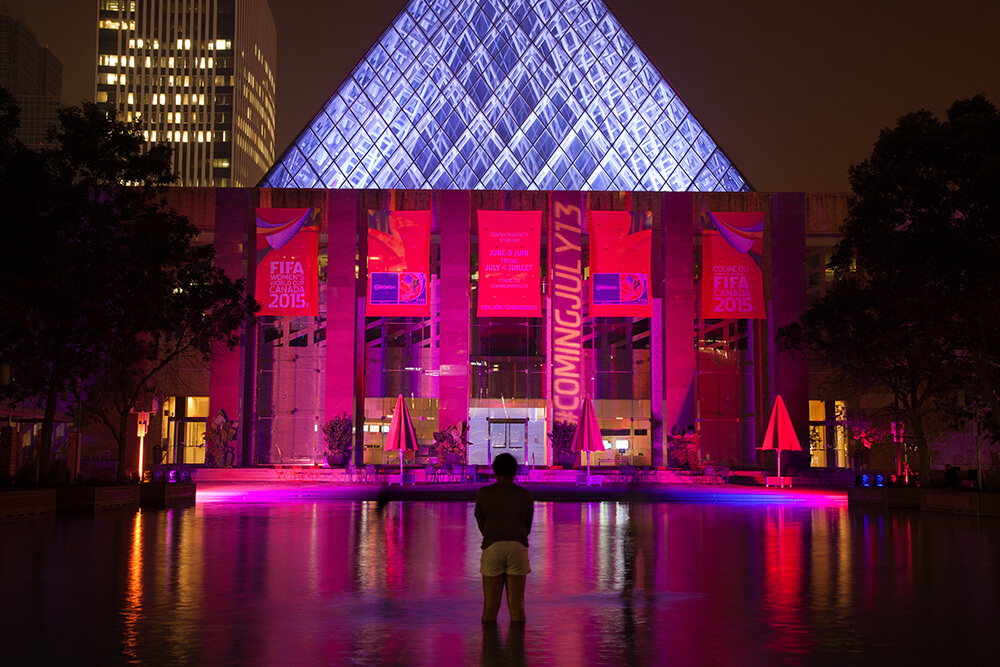 Each of the pieces were fairly different from one another, and seemed to only really be connected by one thing – the hashtag #ComingJuly13.

For a few days, Edmontonians were asking: What’s #ComingJuly13?

Well, on July 13, it was revealed that all of the mystique was related to the Edmonton Arena District! The Edmonton Arena District unveiled its new name – Ice District: Canada’s largest mixed-use sports and entertainment district in downtown Edmonton featuring 25 acres (from 101 to 104 Street and 103 to 106 Avenue) of public space (the Winter Garden), community arena, office towers, condos, shops and more.

Ice District is unveiled in Edmonton.

All of the #ComingJuly13 art installations/activations were part of a teaser campaign building up to the Ice District announcement!

Now, disclosure: the team behind the teaser campaign reached out to me prior to the art installations and asked if I would be interested in partnering with them to help build buzz ahead of the big reveal. I was happy to do so!

Although the actual announcement (mostly the name) has been met with lukewarm (pun intended) reactions, I honestly thought the teaser, with all of the pop-up public art was fantastic. It was fun to visit, fun to photograph, and fun to see people coming across the installations, stopping, glancing curiously, taking their own photos of it (and with it), and asking those around them – do you know what’s #ComingJuly13? 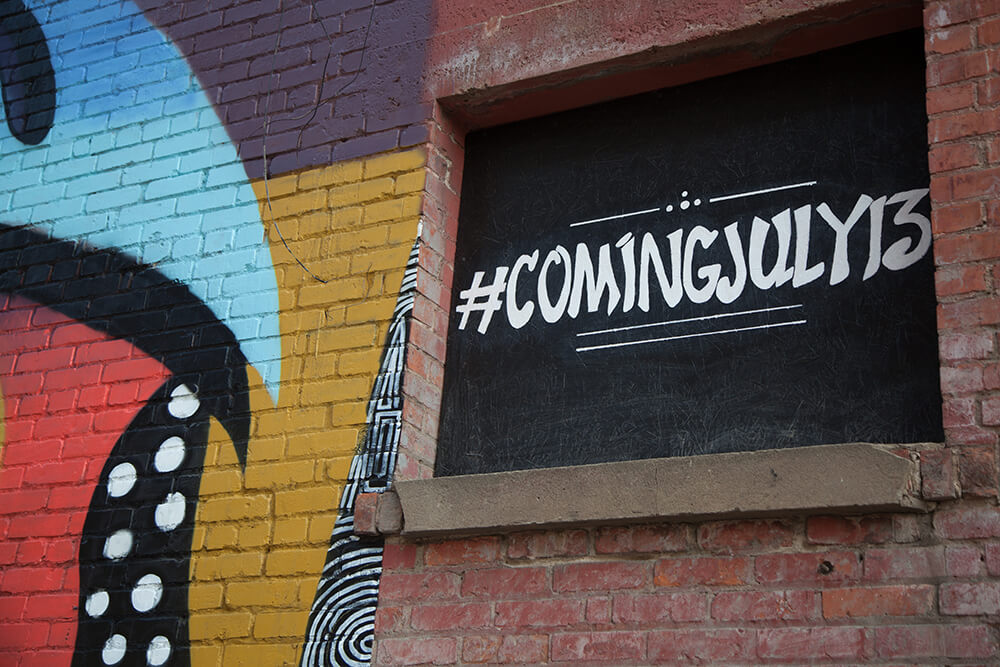 I think teaser-type social/marketing campaigns always run the risk of having the actual reveal be underwhelming, but I do truly commend the team who put this together.

I think it’s great they involved local/Canadian artists. I think anytime there’s something vibrant, interesting, and new to see or do in the city- that’s a plus.

And I think – even if the name doesn’t excite you – what it signals should: that a gigantic (the largest in Canada) new downtown development is coming that promises to bring Edmontonians together for year-round fun and festivities.

Edmonton has been trying to embrace its Winter City identity. This celebrates that!

“We’re going to make sure we have festivities when it’s 30 below.” “We need to honour and exploit being a winter city.” #IceDistrict #yeg

I’ve already been in awe at how quickly the downtown arena has taken shape (104 Avenue from 101 – 104 Street looks so different). 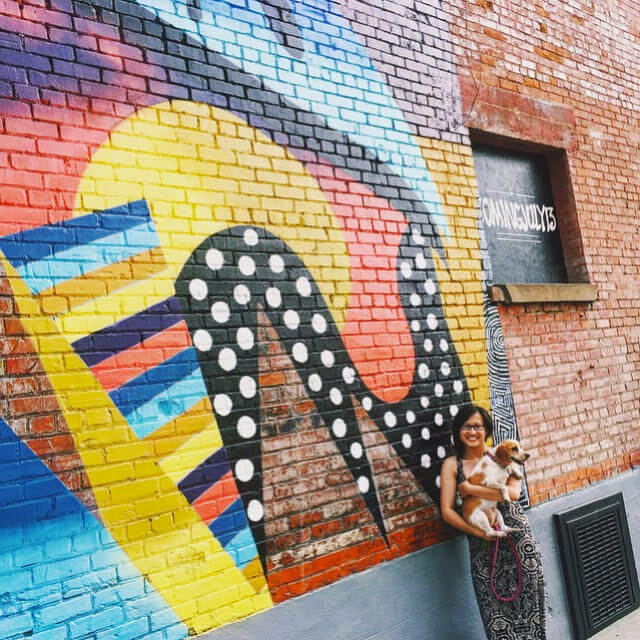 I can’t wait to see what’s next, and how this new district will add to our great city and I am excited I got a chance to take part in the buzz leading up to it.

Linda Hoang is a Canadian blogger based in Edmonton, Alberta, who writes about travel, food lifestyle and pet topics. She's also a seasoned social media/digital strategist with a journalism background. Linda loves exploring the world with her husband Mike, eating their way through cities, supporting local businesses, and photographing Instagrammable Walls. She is the founder of the Edmonton International Cat Festival and a fur-mom to two cats and two dogs.
PrevPreviousRecap: New Look, Menu, Chef’s Table, at Westin Edmonton Hotel’s Share Restaurant
NextSocial Media Notes (#75) – Links for the Week of July 6 – 12Next