This year I was invited to attend the 27th Annual FEASTival of Fine Chefs food extravaganza at the Shaw Conference Centre as a food blogging guest of the Alberta Food Processors Association – which puts on FEASTival. Check out my recap + photos below, but also at the end, read up on some FEASTival of Fine Chefs facts (and tips on how to ‘do it’ best) from committee chair Chef Chris Short! 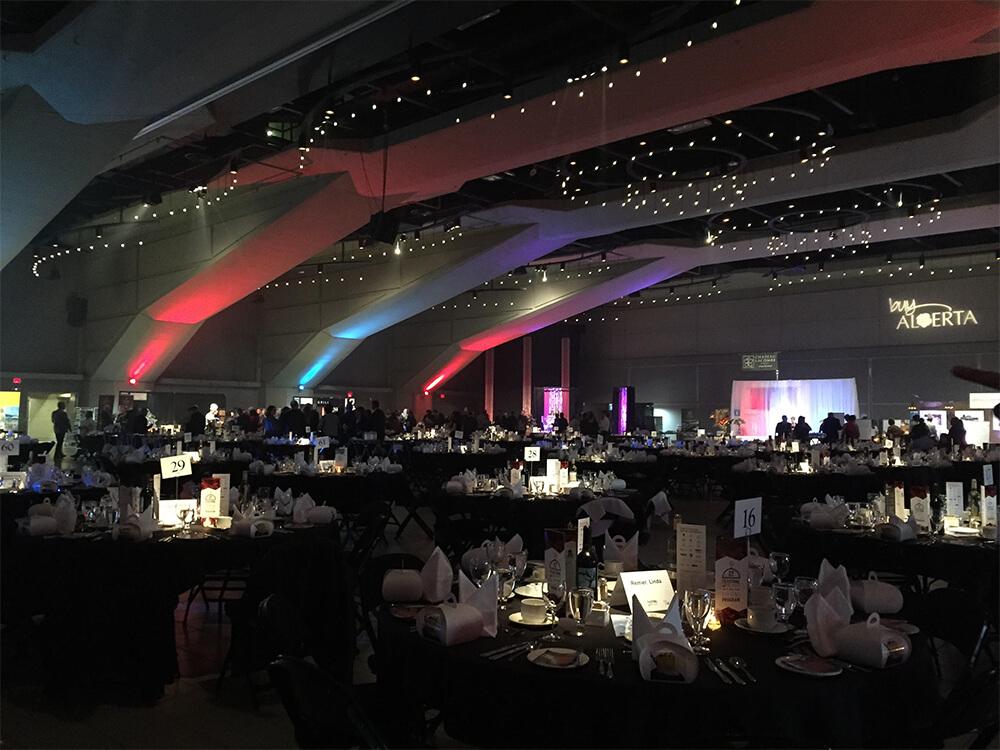 The 27th Annual FEASTival of Fine Chefs at the Shaw Conference Centre.

The Alberta Food Processors Association is a non-profit organization that represents food processors, retailers, growers, service buyers and suppliers. FEASTival is a gourmet dining experience where for $125, attendees get to feast on a four-course (appetizer, soup, entree, and dessert) dinner prepared using ingredients grown or processed in Alberta. 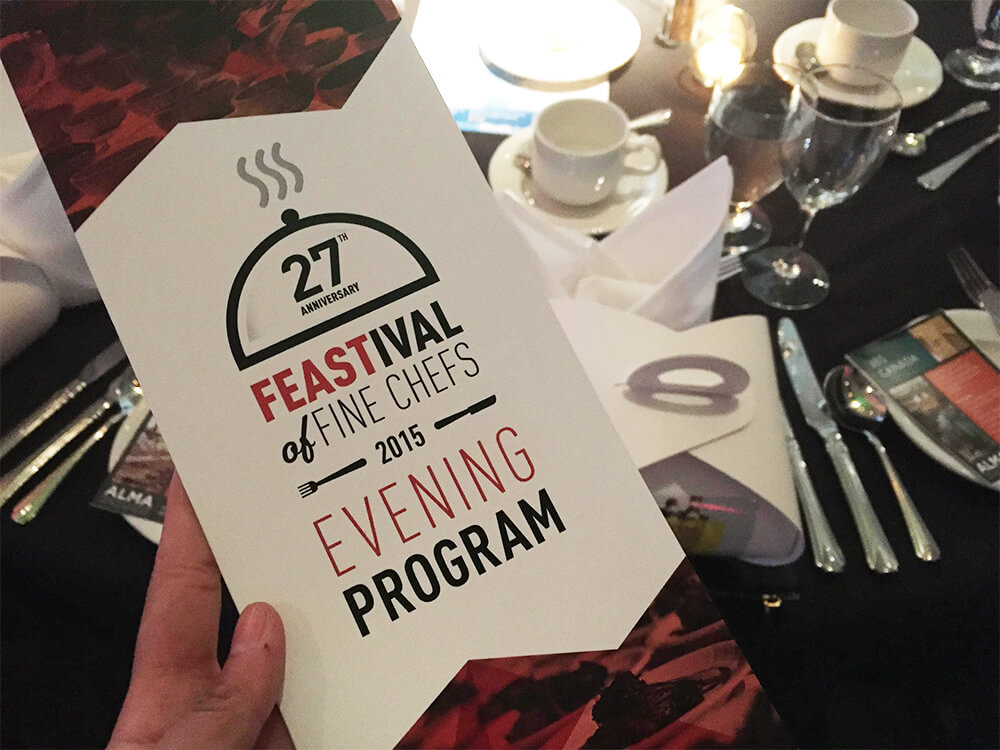 Program for the 2015 FEASTival of Fine Chefs!

FEASTival is a very unique food event – unlike any other in Edmonton. Your traditional event would have you come, seated, and then ideally you know which restaurant or chef is providing the food that you’re dining on that evening, and most likely it would be the same restaurant or chef who is preparing all of your courses for that dinner. FEASTival kind of throws all of that certainty out. 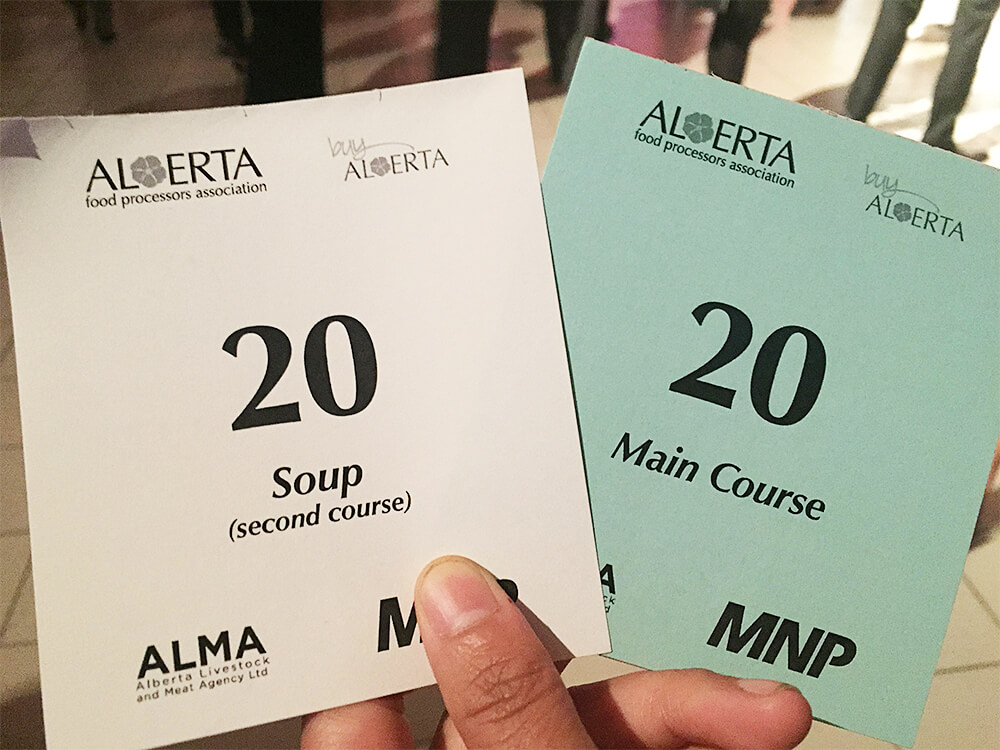 When you arrive at FEASTival you get to choose a number. In the hall, there are 21 different restaurants/organizations whose areas all have a designated number. If your number is like mine – 20 – then I can take a glance around and see that for my starting appetizer, I will be getting my food from Delta South 4404 Restaurant. However, after that course, all of the restaurants/organizations switch numbers. So now for my next course – the restaurant that is 20 is no longer the Delta. And that process repeats itself for all four courses throughout the evening so you will be eating from a different restaurant for each course of the night. You don’t know which restaurant you’ll get next – so there’s this added element of mystery/excitement to the evening!

The mystery element extends to the chefs/restaurants as well. They’re only told their main protein a few days in advance, and then they get a mystery box of ingredients that they need to use for their FEASTival dishes just the day before. 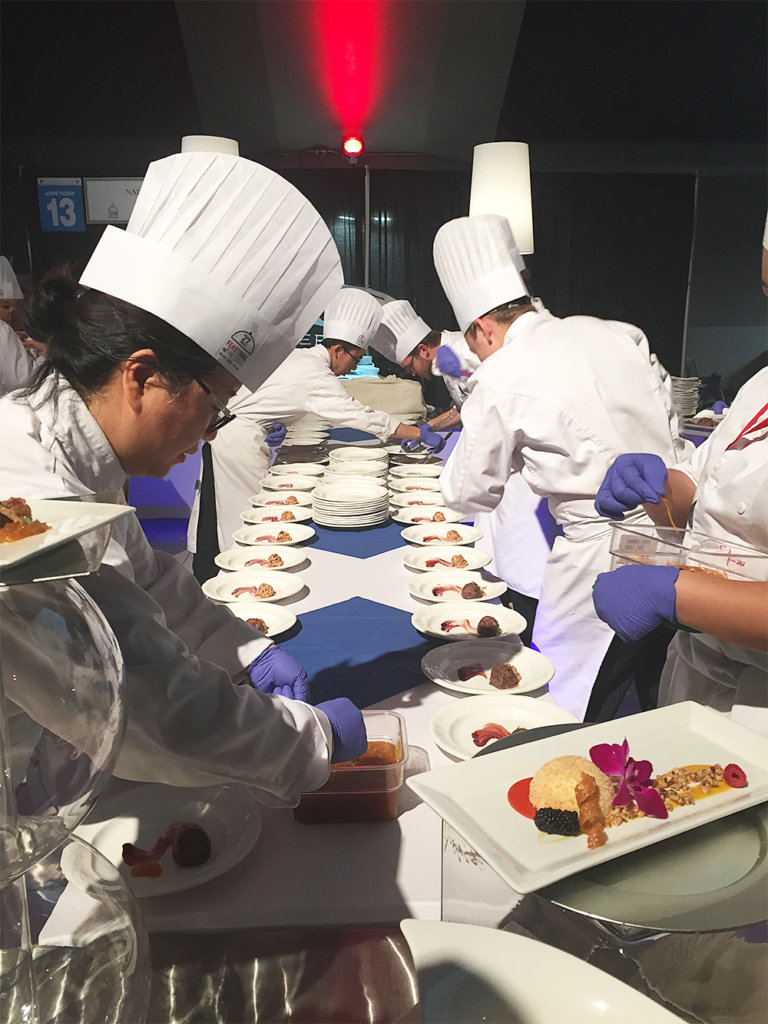 Lots of busy chefs at FEASTival of Fine Chefs.

This year’s event was sold out – with 2,000 attendees!! Before the evening even really begins, you’re encouraged to go check out all the booths and the amazing displays they have set up. Lots of them put a ton of effort into theme-ing their areas, creating incredible ice sculptures and food/fruit/vegetable art. You will also find lots of them serving hors d’oeuvres. Here’s a few shots of the cool food/display art at some restaurants at FEASTival: 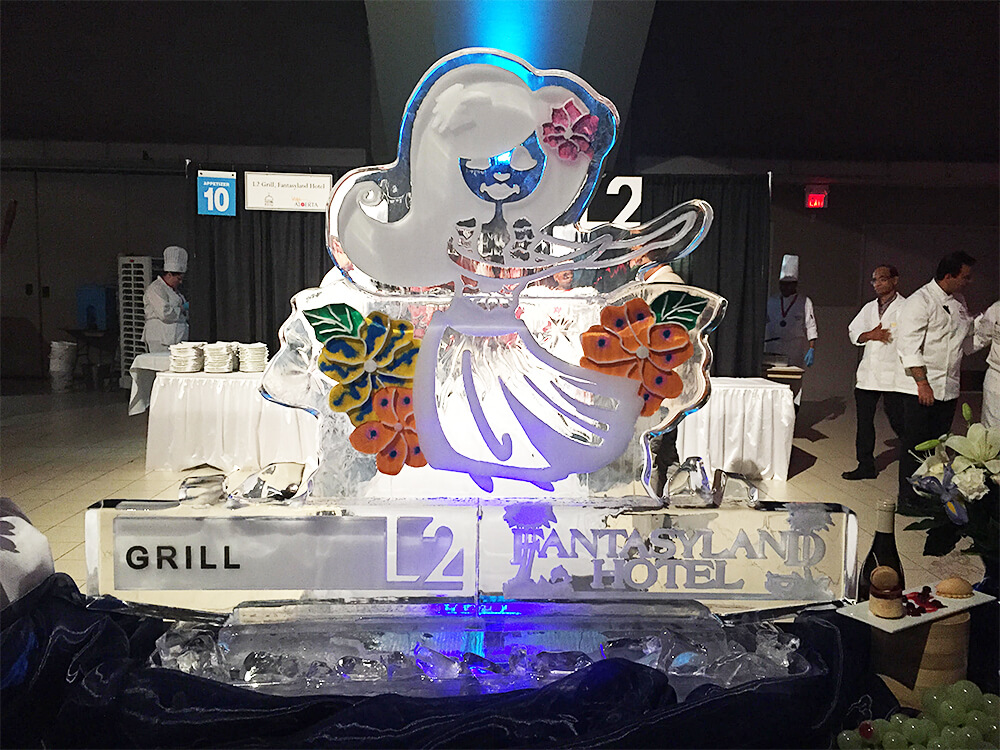 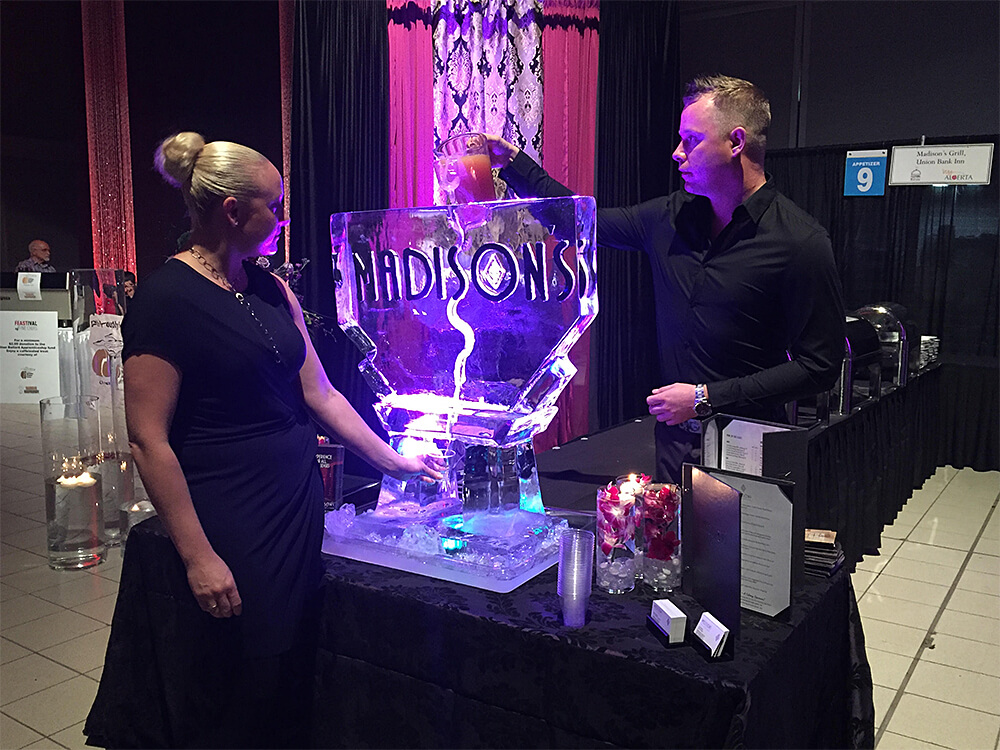 Ice bar! From Madison’s Grill at FEASTival of Fine Chefs. 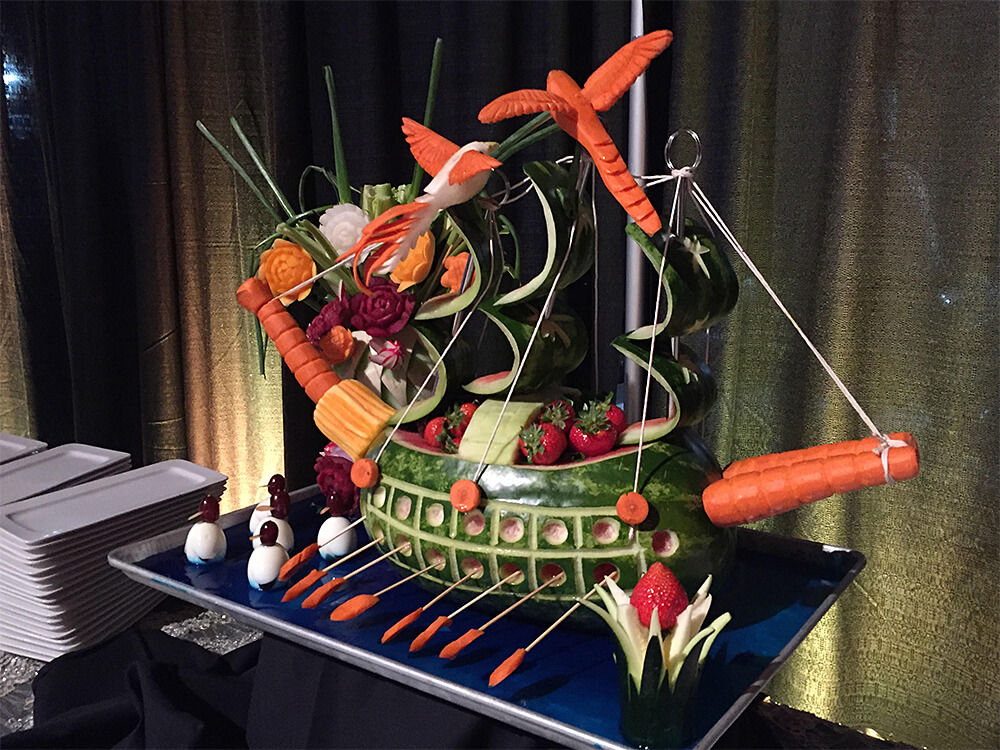 Impressive food art from the Fairmont MacDonald at FEASTival of Fine Chefs. 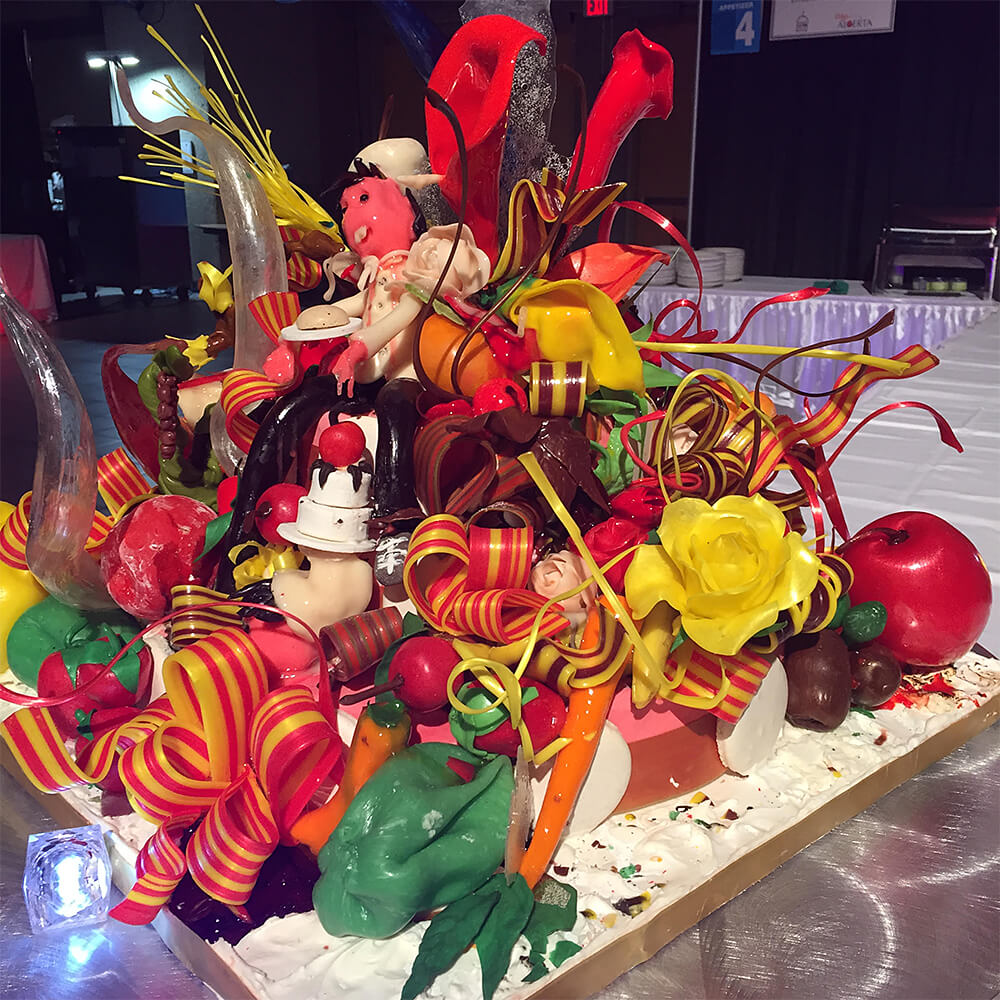 FEASTival is a charitable event as well! Throughout the night, there is a silent auction that runs, with money raised going to the Stan Ballard Apprenticeship Fund – which supports post-secondary education for Alberta apprentice chefs. Each year SAIT, NAIT and Lethbridge College award the Stan Ballard Apprenticeship scholarships to 2nd year students enrolled in the Culinary Arts program. 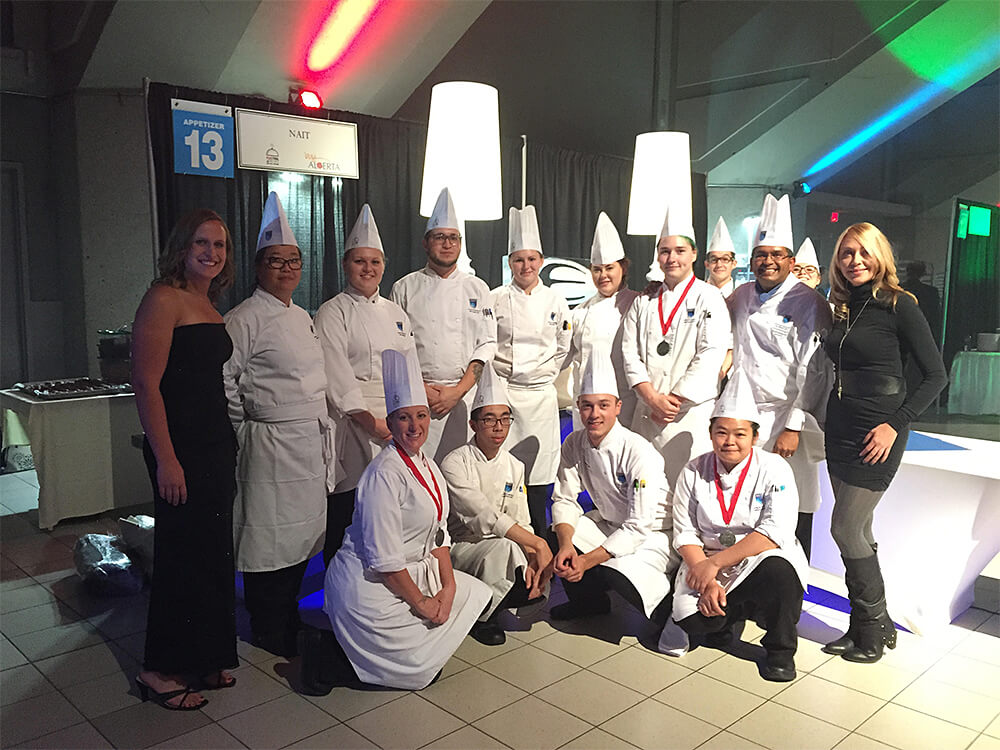 And we got to sit with the delightful FEASTival committee chair Chef Chris Short, who is also a culinary instructor at NAIT! Our friends Sharman and Chris were also at FEASTival (at a different table) – shout-out to them. 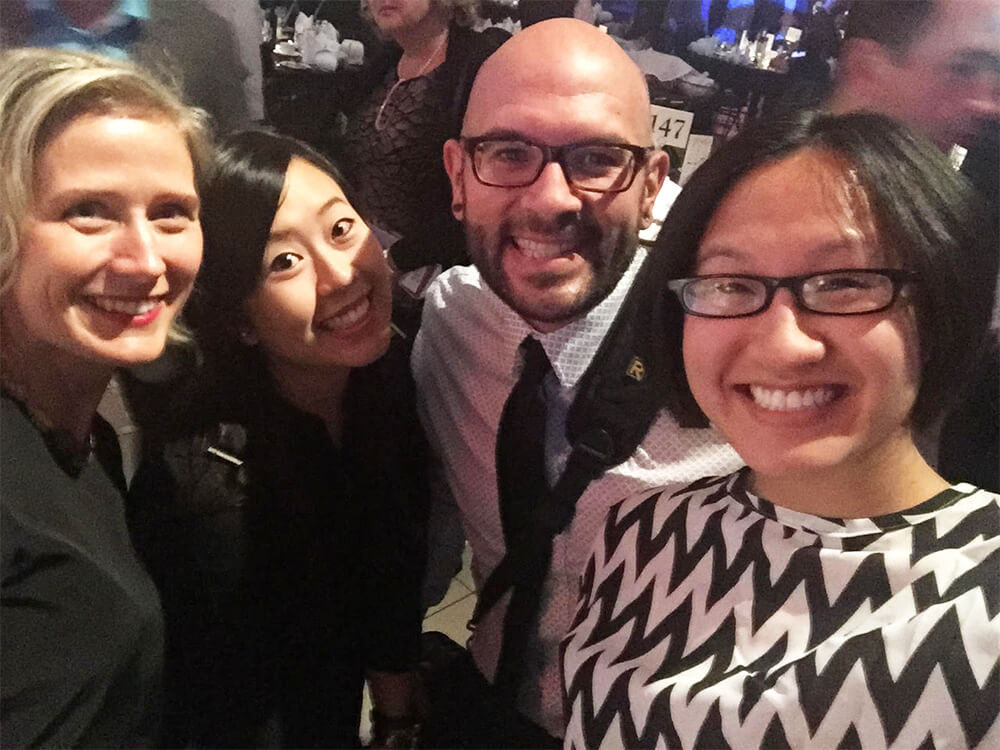 My first course of the evening was the fennel roasted pork belly with apple and pear chutney from Delta Edmonton South’s 4404 Restaurant. Delicious!

For soup, I got the Westin Edmonton’s poached egg soup, but really throughout the night our group was passing around dishes to be sipped and shared among the group. The apple celeriac soup from Ernest’s at NAIT was very good, and our table also got the lobster and corn soup from Graze Restaurant. It was interesting sitting with Chef Chris Short because he could give us the ins and outs of the event. There is a panel of judges tasting and scoring restaurants’ throughout the night and it’s noted if their dishes include ingredients that would not be local to the province. 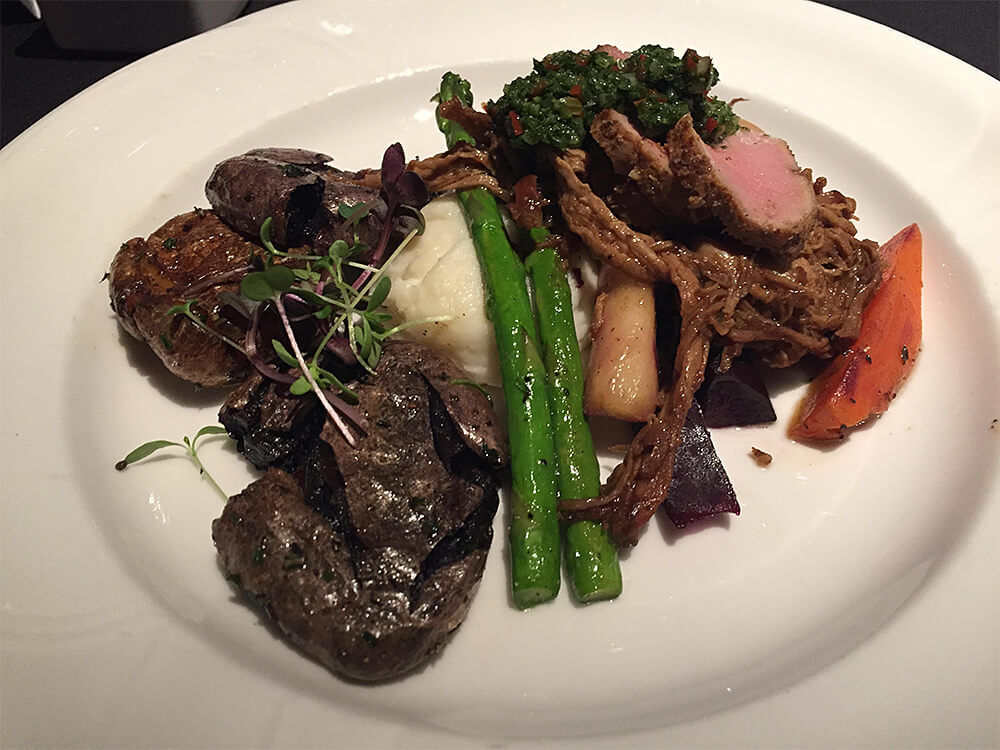 But here is some more #foodporn from other dishes passed around our table (pro tip: share with your tablemates! Well, that’s easier done if you know your tablemates lol). 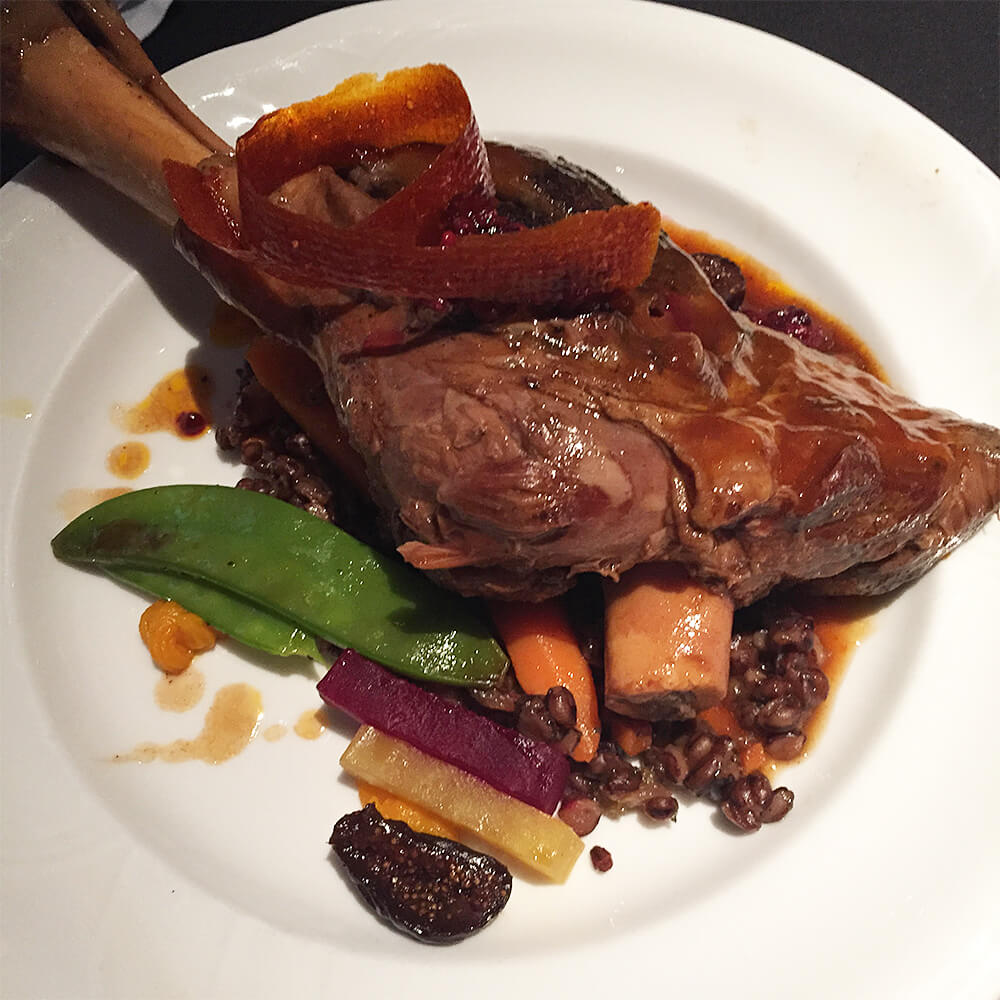 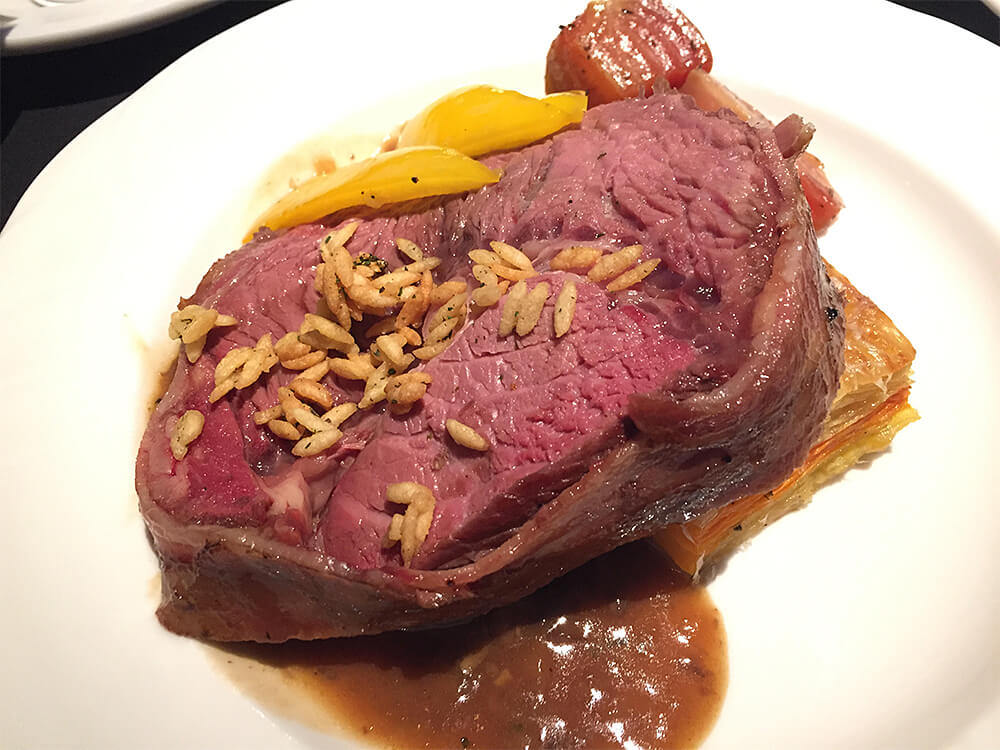 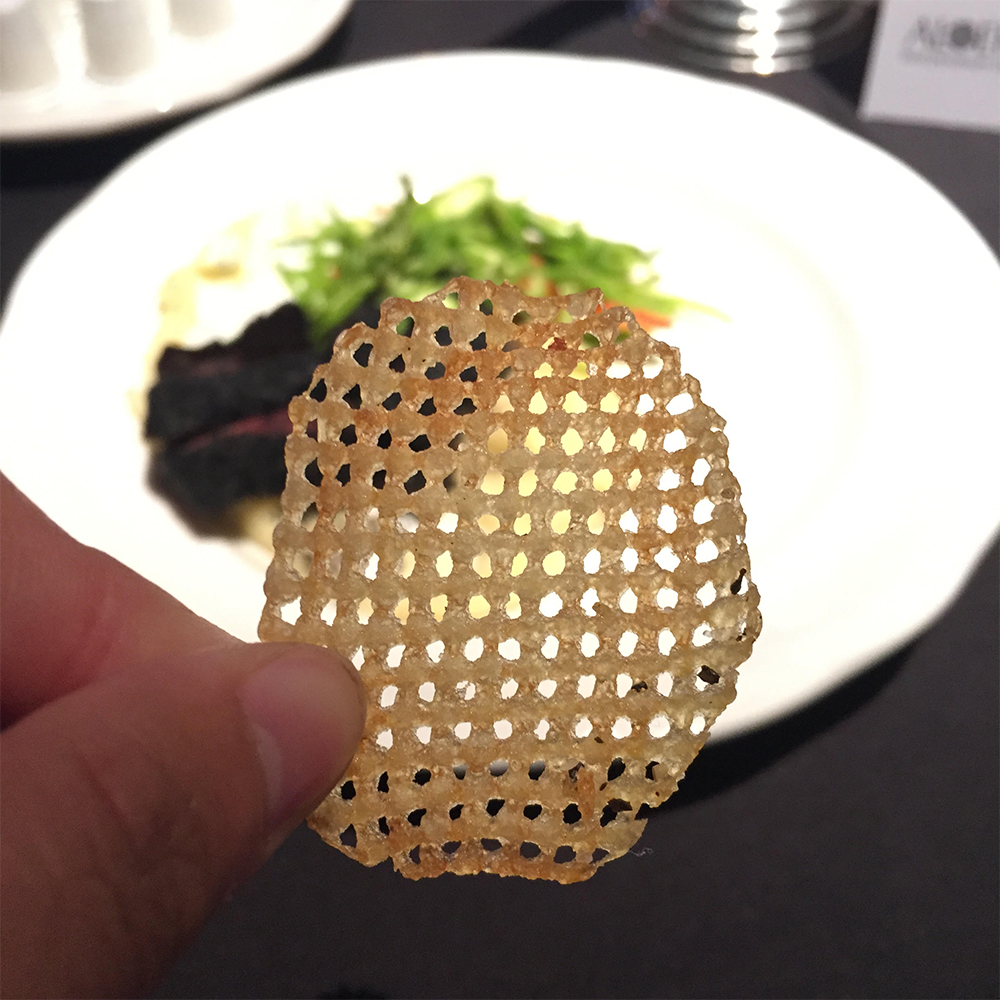 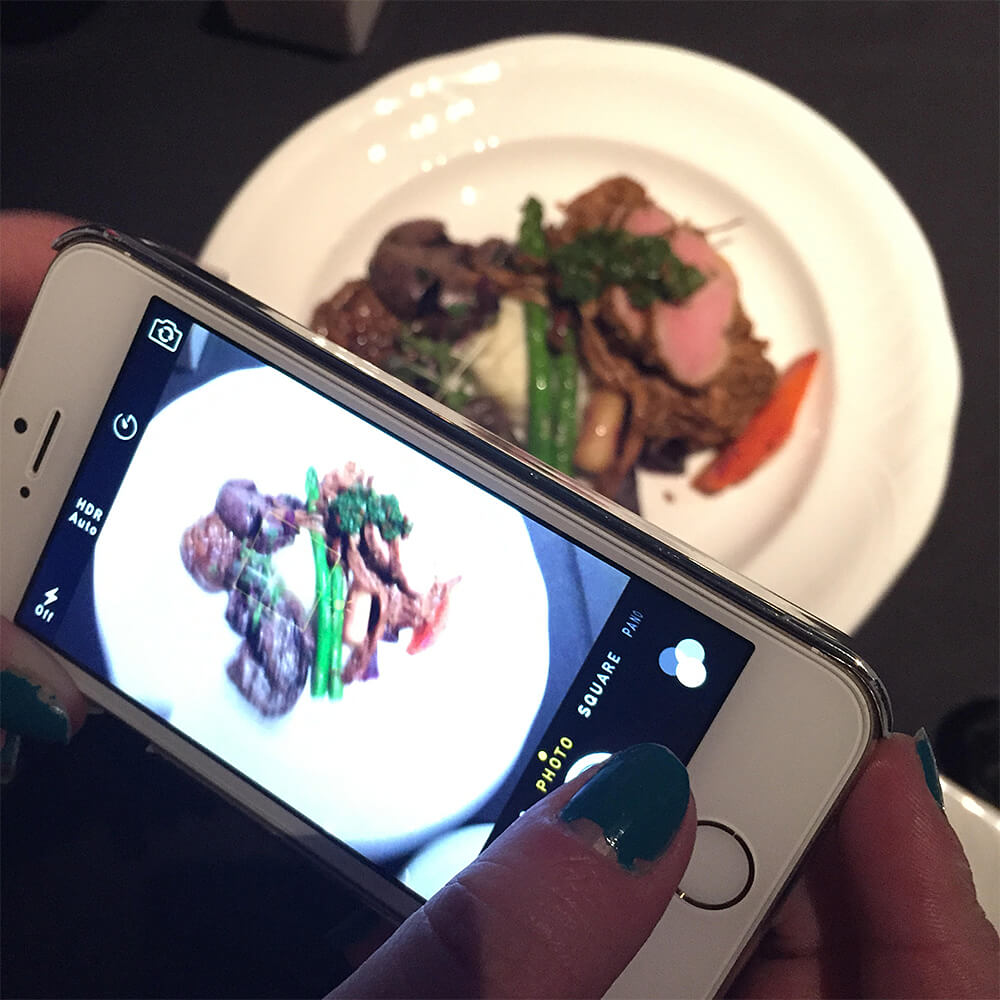 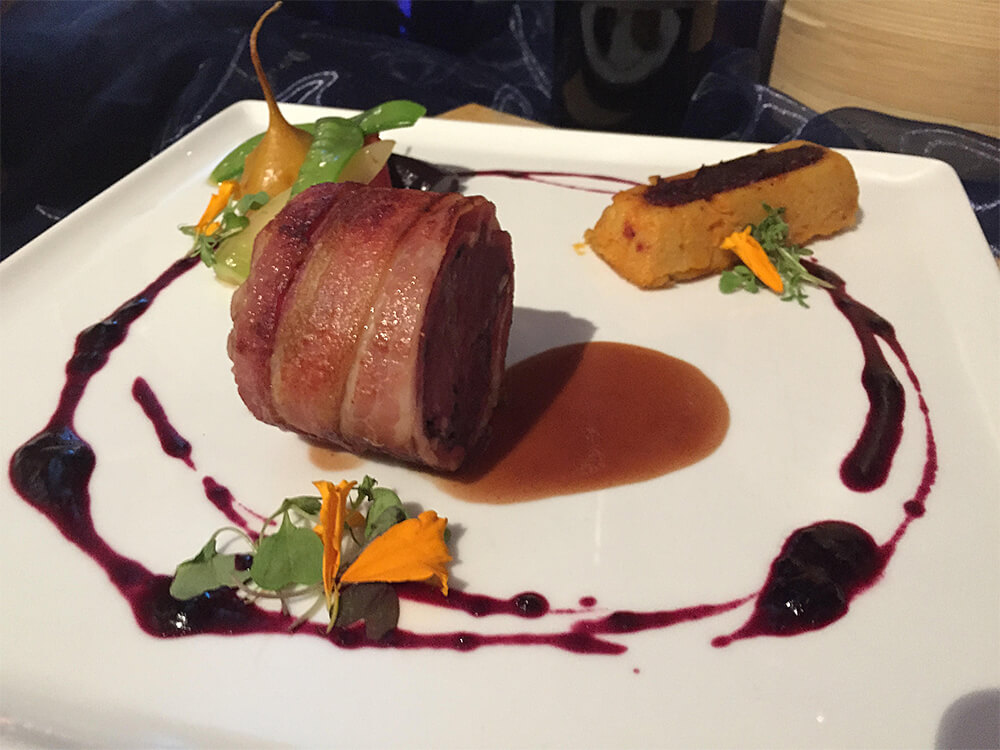 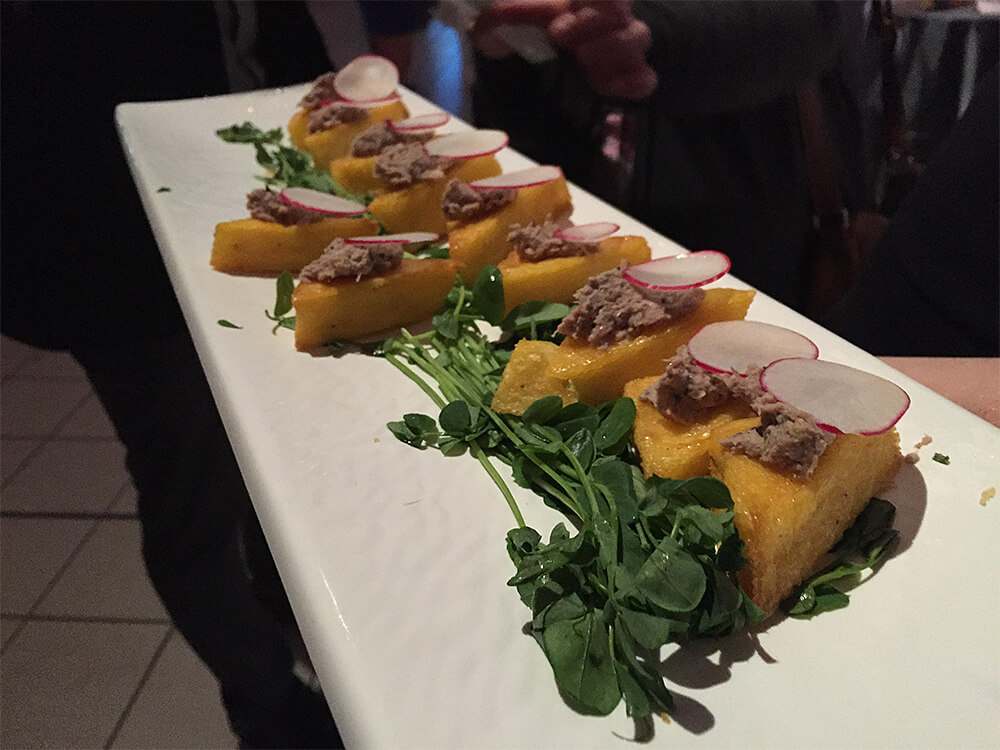 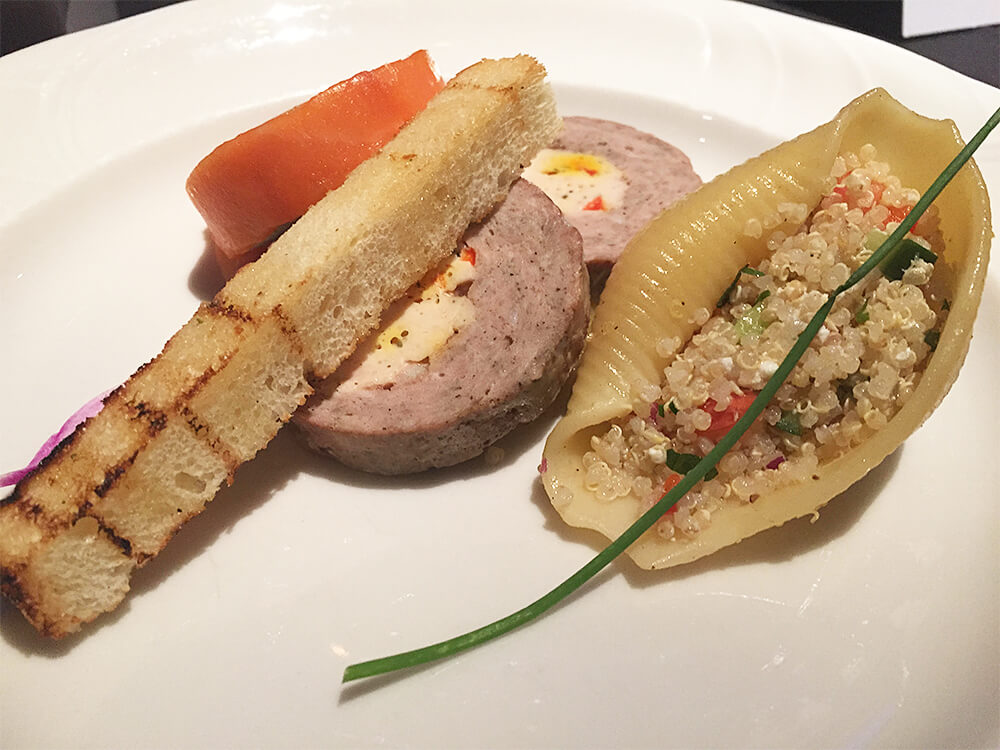 Because of its unique, lottery-like format, I find FEASTival can be a bit of a hectic environment. You don’t want to wait in line for a long time to get your food, so you’ll find it beneficial (but hectic) to dart around and make sure you get a good place in the line. You also need to be on the look-out for when the numbers change between courses, so you have an idea of what direction you should be going in so I wouldn’t really call it a relaxing night out, lol. I know some people also can be disappointed if they maybe had some restaurants in mind that they were hoping to try, but then the fate of the FEASTival numbers do not work in their favour.

You will definitely leave FEASTival feeling stuffed but it’s really a luck of the draw with both what restaurant you get, and also quality of the dishes. Sometimes the dishes can be amazing -a big hit. Or it can be a bit of a miss. You just don’t know, so for that reason, it can be a bit risky to put out the money to attend this kind of event, and then maybe not get the guarantee that you’ll like either the restaurants you get or the dishes that you eat. But you are supporting local food, it goes towards a scholarship to help young chefs, and it really is a fun night out that, like I said, is unlike any other culinary event in the city. The idea as well is that the apprentices from these restaurants are the ones who are leading the way – so it’s great experience for them.

Part of the price and the fun I think is the go-go-go, lottery-type environment/experience that I think you are in part paying for with your ticket price. It’s definitely more of a fancier, upscale kind of event and atmosphere – really just a great night out. People will get dressed up to go to FEASTival and that’s awesome, but then be prepared to scurry about in your long dress and suit to make sure you get your food in a good time frame (I jokingly ‘elbowed’ a few people on my way to get food, lol). 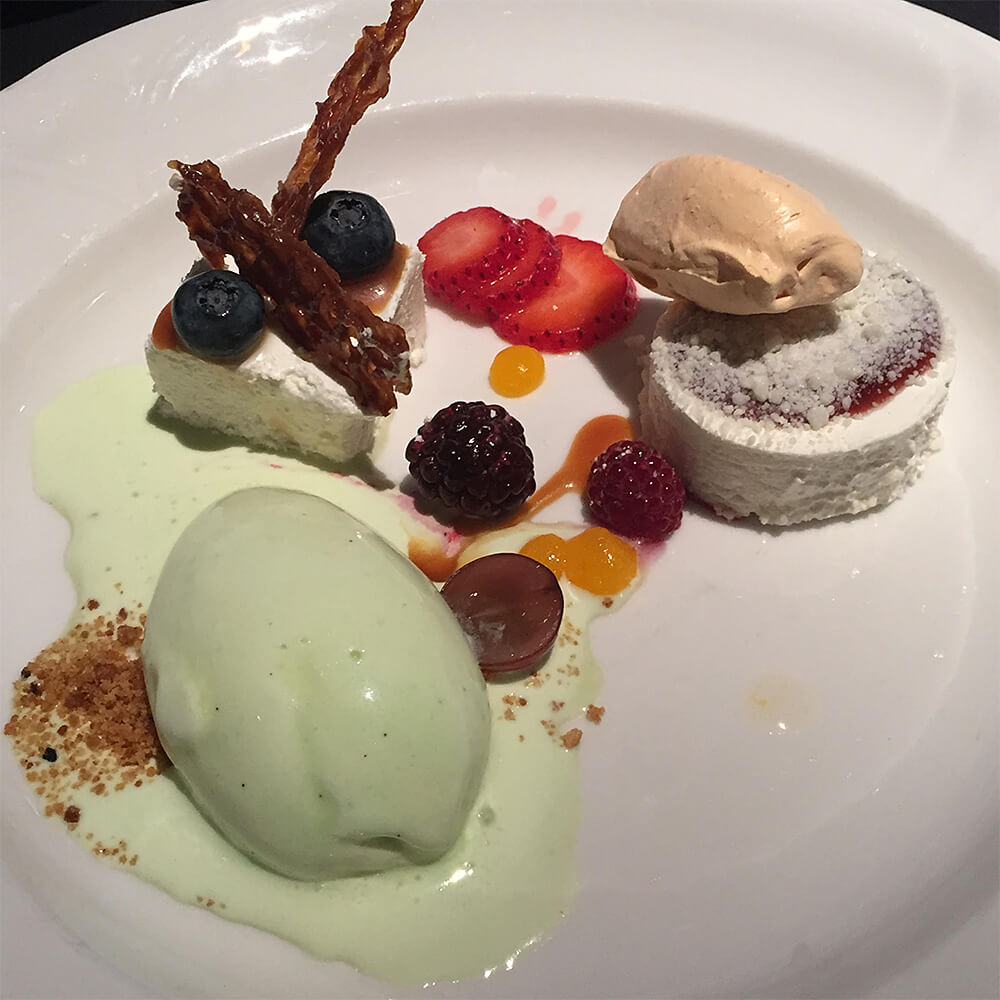 See a bit more of the FEASTival vibe in this video that was created by user waughwaugh on Vimeo, for FEASTival’s 25th anniversary back in 2013:

And scroll on to read about five facts about FEASTival of Fine Chefs from Event Committee Chair Chef Christopher Short! 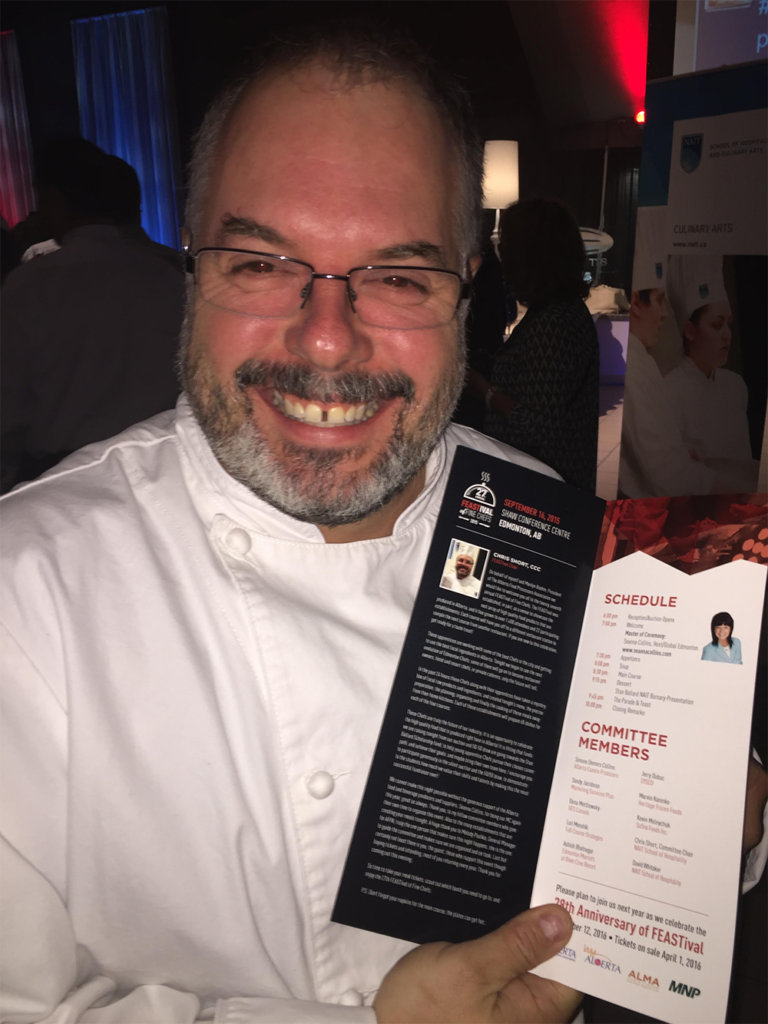 Five Facts about the FEASTival of Fine Chefs

1. It’s unlike any other culinary event in Edmonton – why this particular format?

To my knowledge, this is the largest “local food” event in Alberta, and it isn’t new. We have been doing local, Alberta-made food for 27 years now. Our yearly average number of people is approximately 1,500 and we had 21 different establishments participate this year. The process comes from an age old traditional amongst chefs: the Black Box Challenge. This is where a Chef would receive a box full of ingredients they have no prior knowledge of and in a specified amount of time create one or more dishes. In our case, we give the chefs a bit of a head start by informing what their proteins will be the week before the event, however they have no idea what else they are getting. e.g. vegetables, dairy etc. These items they receive in the afternoon the day before the event, thus only allowing them about 24 hrs to create 4 courses to serve approximately 65 people.

2. What are the charitable aspects of it and why is that important?

The Stan Ballard Endowment Funds supports educational scholarships for Alberta Apprentice Chefs at NAIT, SAIT, Lethbridge College as well as with apprenticeship and industry training, and other related activities.

3. Insider tips to get the best experience?

4. How has it changed and seen growth/success in the last 27 years?

In the past years we have seen many establishments come and go, and ingredients moving from common cuts to less common cuts. For example, there’s no more beef tenderloin but we now have venison sirloin. This creates more of a challenge for the chefs, as well as the evolving dining habits as our guest become more educated on food.

5. From chef or restaurant perspective, why do they want to get involved?

The whole point of this event when I was a chef of one of the establishments was that it was the one time throughout the year that there were no restrictions on what you could do on the menu – no corporate rules, no thoughts on whether or not a dish would sell on the menu, it was a chance to experiment. It’s also a great experience for the apprentices as they are heavily involved with the planning of the menu, and of course gain valuable experience preparing dishes they are unfamiliar with or wouldn’t get a chance to make. Also the apprentices have time once they get there to meet other chefs and make contacts, see the displays, and learn!

Check out some of the other FEASTival recaps from my blogging friends over at Kitchen Frau and Beyond Umami!

Linda Hoang is a Canadian blogger based in Edmonton, Alberta, who writes about travel, food lifestyle and pet topics. She's also a seasoned social media/digital strategist with a journalism background. Linda loves exploring the world with her husband Mike, eating their way through cities, supporting local businesses, and photographing Instagrammable Walls. She is the founder of the Edmonton International Cat Festival and a fur-mom to two cats and two dogs.
PrevPreviousPreview: 2015 Nuit Blanche Edmonton (and the Dance of the Cranes!)
NextPreview: Haunted Halloween Gala at the Fairmont Banff Springs HotelNext