Preview: 2015 Nuit Blanche Edmonton (and the Dance of the Cranes!)

For the first time, Nuit Blanche, an all-night contemporary art festival is coming to downtown Edmonton!

On the evening of September 26 (and into the early morning of September 27), 30+ different art installations/events will be taking place simultaneously in the downtown core/Ice District. Nuit Blanche – which translates into ‘a sleepless night’ – began in Paris in 2002 and now takes place in cities around the world.

Edmonton’s event starts at 7 p.m. on Saturday the 26th and goes until 4 a.m. the morning of Sunday the 27th. Some of the art/events include light installations, sound installations, video installations, interactive installations, and extravagant, special commissions like the Dance of the Cranes. 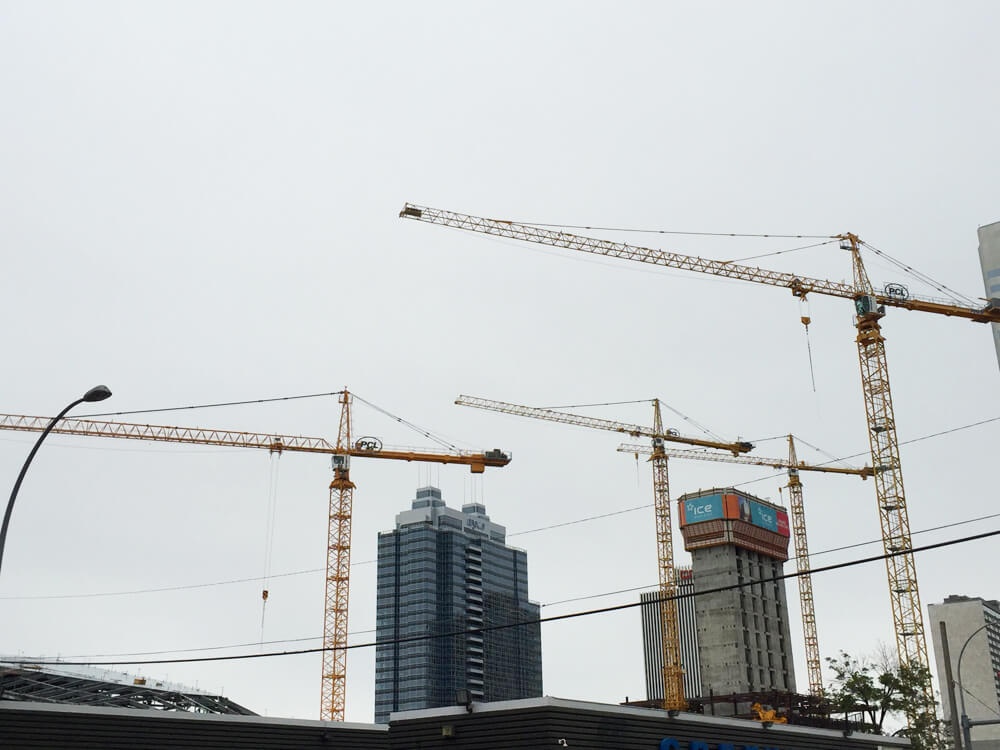 Dance of the Cranes will begin at 11 p.m. on September 26 as part of Nuit Blanche Edmonton.

The Dance of the Cranes, presented by Ice District, is a choreographed dance performed by four high-rise construction cranes at the site of the new downtown Rogers Place arena. Crane operators will pivot, rotate, and sway the cranes in harmonized gestures set to music and lights. It’s directed by Brandon Vickerd, a Toronto-based artist, who recently did a Dance of the Cranes performance in Washington. There, nearly 5,000 people came to see the massive, 900-tonne structures ‘dancing’ in the skies above.

Over the weekend, I got a chance to preview Edmonton’s Dance of the Cranes during a rehearsal ahead of the big day – and it was… really, really cool! Vickerd came up with the concept when he was walking down the street, listening to this iPod and the music happened to sync up with the cranes movement above him. “It struck me as a beautiful experience,” he said to media (and me!) on Sunday. He developed the Dance of the Cranes as a way to change the way people think of the construction industry and how it builds the city around us. It’s also meant to be a celebration of the work of the construction industry. 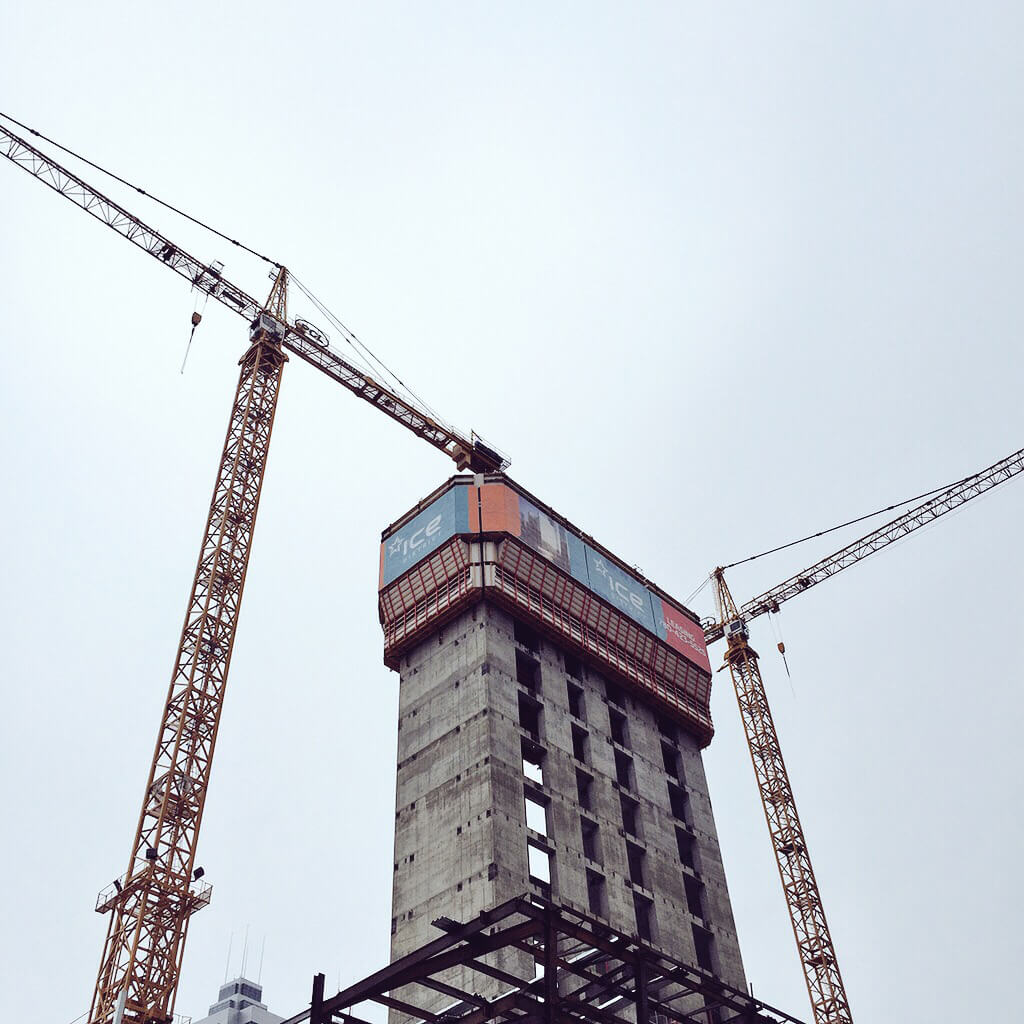 Watch the Dance of the Cranes from the top floor of the City Centre West Parkade (103 Street and 103 Avenue) on Sept. 26!

It’s pretty insane how the choreography is done. There are four crane operators and four riggers (plus back-ups) who are all communicating, with very specific down to the second instructions on how fast to move, at what degree, and when. I got a sneak peek at their choreography sheet and it’s incredible – Crane D1 needs to move 1/4 rotation right at first gear (slow), stop facing north while Crane D2 needs to do a 3/4 rotation at full speed (fast) when the lights come on, etc.

It’s going to make crane operators feel like rockstars! In fact, Kevin Bell, one of the crane operators for this performance, did tell media he thought the whole process was pretty awesome, and that his spot up in the crane is the best seat in the house. 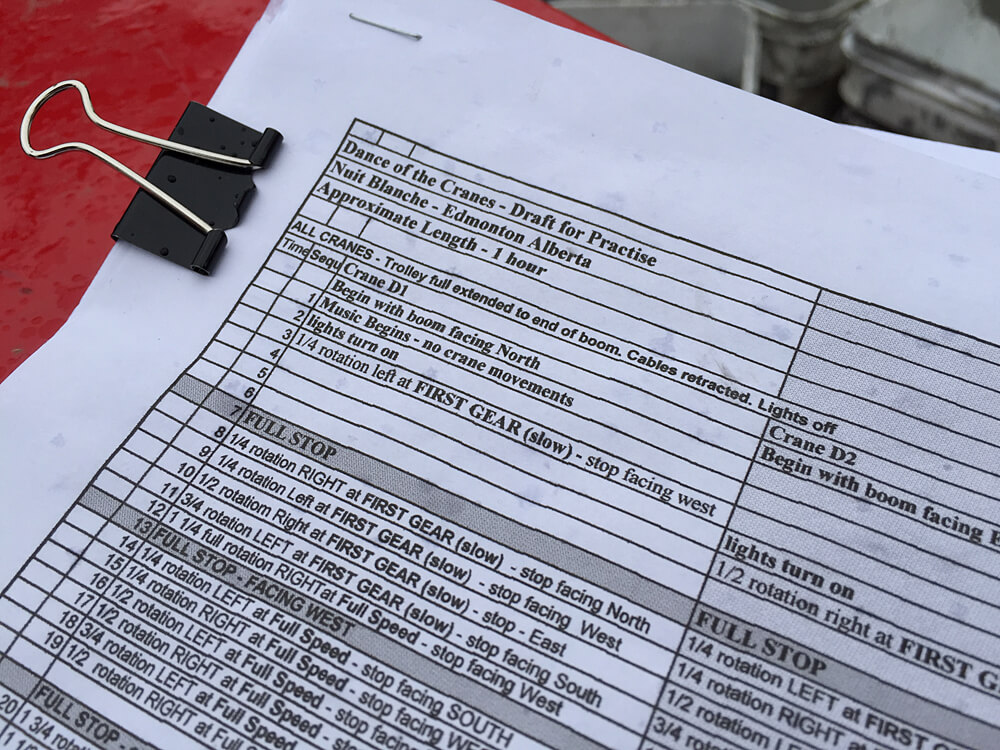 Intense planning going into Dance of the Cranes.

Edmonton’s Dance of the Cranes is the third one from Vickerd. The first was in Toronto back in 2009 and the second was that one in Washington, just this summer (July 2015). Vickerd hopes to see thousands of Edmontonians come out to see this hour-long performance beginning at 11 p.m. on September 26. This Edmonton Dance of the Cranes is the largest one yet. “It’s going to be a massive spectacle,” Vickerd says. “The cranes will start off all dark, all the lights will be dim. When the music kicks in it will echo through the street… it really turns the whole city into a stage for dance.” 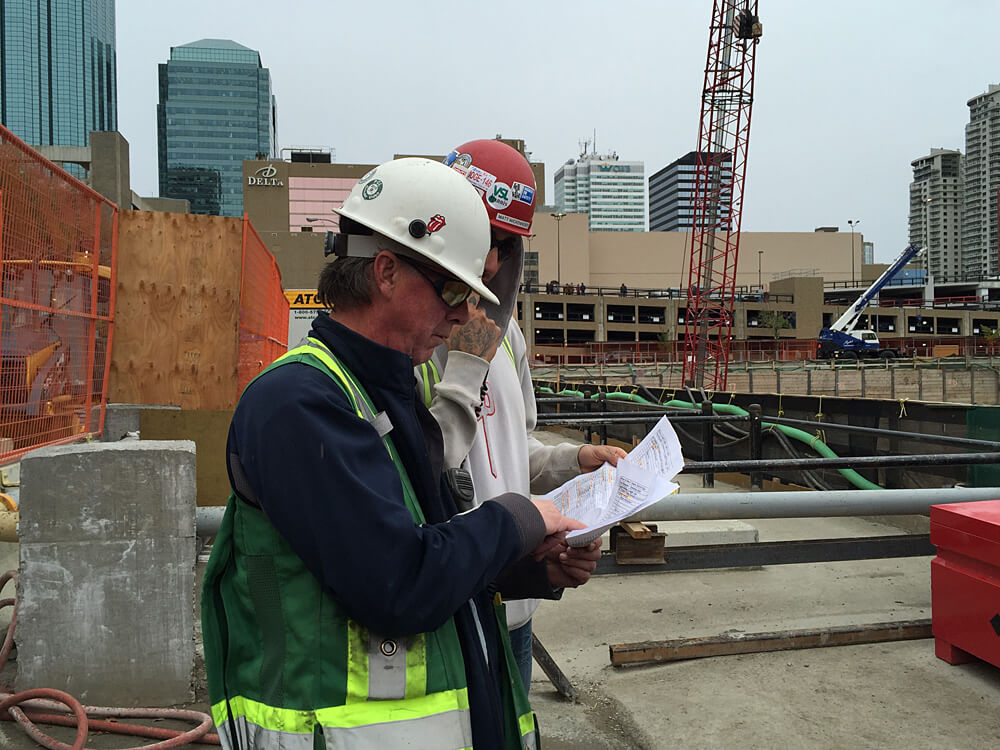 Figuring out choreography and next moves for the cranes down on the ground.

The best place to view Dance of the Cranes is on the top floor of the City Centre West Parkade at 103 Street and 103 Avenue. The Ice District has rented the entire parkade so that people can view it from any floor though (no parking allowed that evening). Also, obviously people who live in the highrises downtown should be getting a pretty sweet view too. ;)

Check out my friend Chad’s footage of the dancing cranes rehearsal on CTV below:

Along with the Dance of the Cranes, I’d also be interested in checking out Nuit Blanche’s Pothole Possibilities – located at 100 Street west of Churchill Square. That one will address “a local irritant and obsession: the persistent pothole.” Throughout the night, artists will decorate the cracked roads – turning them into art! Attendees will get a chance to write letters, poems, drawings, or other pot-hole related musings around it too.

The Yoko Ono Wish Tree / Imagine Peace installation, located outside on the south end of City Hall, will see 121 trees line the square – where participants are invited to write a wish on special tags and tie it to a branch of the Wish Trees. Afterwards, the wishes will be sent to the Image Peace Tower in Iceland, and the trees will be planted in communities throughout Edmonton. What will you write?

The Make it Flat installation (located at 104A Avenue and 100 Street west of the CN Tower) is where a steamroller will flatten items in its path including lightbulbs, yoga balls, air mattresses, toothpaste tubes, and bubble wrap. That should look pretty cool! (Kind of like a fancier Monster Trucks event lol).

Overall, Nuit Blanche should be an awesome (free and family friendly!) night.

Plan ahead and decide which installations you’d like to see!

The Dance of the Cranes does start a bit late (but early if you consider the actual end of the festival isn’t until 4 a.m.) but also look at it as if you’re going to see the fireworks show downtown. It’ll be a spectacle like that (and run for an hour long!)

I think it’s really cool how Nuit Blanche goes so late / early into the next morning. We’re always talking about revitalizing/rejuvenating downtown Edmonton, and getting more people staying out in the streets later into the night – this is kind of the perfect event for doing just that.

So, which art installations are you most looking forward to seeing at Nuit Blanche?

Disclaimer: I will always provide my 100% honest opinion on this blog. I was invited to Dance of the Cranes media preview as a guest and blogging partner. This has no impact on opinions stated in this post.

Linda Hoang is a Canadian blogger based in Edmonton, Alberta, who writes about travel, food, lifestyle and pet topics. She's also a seasoned social media/digital strategist with a journalism background, the founder of the Edmonton International Cat Festival and co-founder of Stop Race Based Hate, an online anti-racism education tool. Linda loves exploring the world with her partner Mike, eating their way through cities, supporting local businesses, and photographing Instagrammable Walls. Linda is a fur-mom to two cats and two dogs.
PrevPreviousSocial Media Notes (#85) – Links for the Week of September 14 – 20
NextRecap: 2015 FEASTival of Fine Chefs (and tips on how to do it best!)Next