The 4th annual Edmonton Expo returns at the end of the month – bigger and better than ever before!

I’m ashamed (bolding that for emphasis on how much shame) to say that I’ve never been to Edmonton’s Comic & Entertainment Expo. I like to think that generally I’m pretty geeky (hence the lindork nickname) and certainly I’m passionate about lots of popular culture topics and fandoms, but I’ve never been able to make it out to this annual expo. That changes this year!

I am so excited to attend the 2015 event running September 25 – 27 at Northlands Expo Centre! Initially I was excited to just finally go for the very first time and take in all of the booths and buzz, cosplay and panels.

THEN THEY ANNOUNCED JENNA COLEMAN FROM DOCTOR WHO WAS COMING.

Clara Oswald (Jenna Coleman) from Doctor Who will be at the 2015 Edmonton Expo! Photo supplied by Edmonton Expo.

Mike and I only recently became Doctor Who fans in the last two years. In a very short span of time, we watched all eight seasons of NuWho (The Doctor Who revival that began in 2005) and became obsessed with so many of the characters. While my all-time favourite companion + Doctor duo is still Rose and the Doctor, and even Amy grew on me as a companion for Matt Smith, Clara (played by Jenna Coleman) quickly became a favourite for both Mike and I. So smart, so sassy, so pretty!

Up until about the last week of August, my excitement for the Edmonton Expo was at pretty controllable levels – they had even announced Stan Lee was coming, which, seriously – the Stan Lee – that’s really cool but still – controllable levels of excitement. Then they announced Clara/Jenna Coleman – and that excitement level shot through the roof! We cannot wait to see her (we are going to purchase a Photo Op package if I’m unable to chat with her as media)!!

There are going to be so many big names in pop culture/comic/geekery – Eliza Dushku is coming (that was a recent announcement! So exciting!) Along with members from Guardians of the Galaxy, Buffy the Vampire Slayer, The Flash, Once Upon a Time, Orange is the New Black, and more! (Lots of blast from the past stars too – Power Rangers actors for example).

You can check out all the creator/voice actor/special guest list here!

There’s really something for everyone. It’s a totally all ages, family-friendly event. In fact, their mandate is to “provide a world-class gathering for fans of all ages to come together and celebrate what they’re geeky about in a safe, family-friendly, and welcoming environment.” From comics to superheroes, hit TV shows and sci-fi. There will be hundreds of vendors in the exhibition halls, tons of artists and creators in Artist Alley, panels and workshops, and of course the autograph and photo-op sessions. Just seeing people dressed up in various cosplay alone is fun (last year Mike went without me and saw a ton of great costumes!) 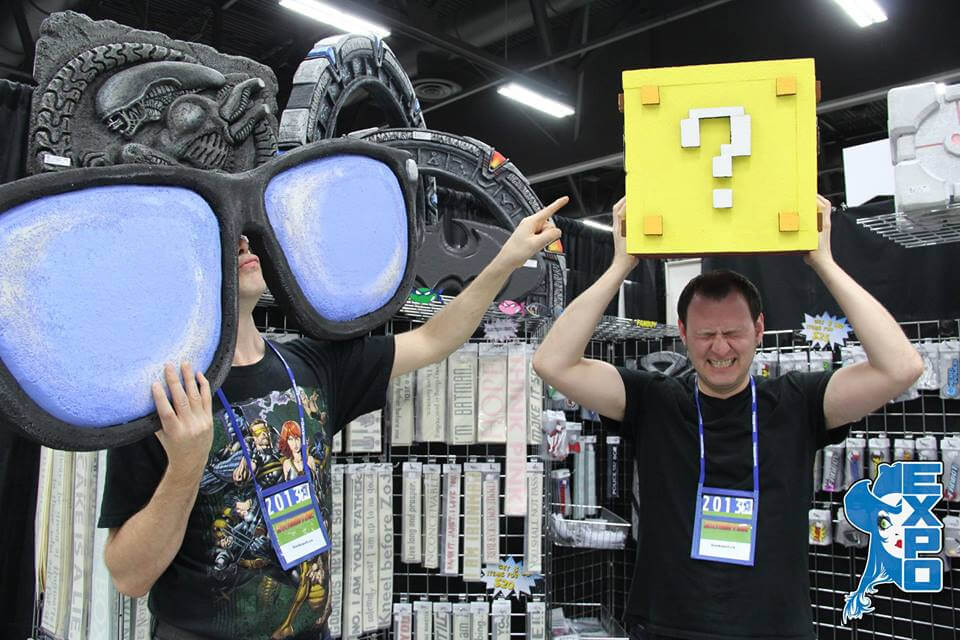 The closest to a ‘Con’ I’ve been to is the eek! Comic & Pop Culture in St. Albert, which was fun though much smaller scale. Attending the Edmonton Expo I feel like should be related closer to your big Comic Con type of shows in the States. It’s been one of my backburner goals the last couple of years to attend a Con where the cast of Doctor Who would be in attendance (particularly David Tennant) – so attending Edmonton Expo and seeing/meeting (hopefully) Jenna Coleman will be the closest thing to that! (Is my geekery slowly seeping out? I am so excited! Mike and I are trying to see if we have enough time to scrounge together a Doctor Who-themed cosplay outfits).

So excited to take photos with cosplayers! We are Groot! Photo supplied by Edmonton Expo.

I’m excited to give away a pair of Weekend Passes (full access to the shows – all three days for two people – valued at $130) so you can bask in all the comic/pop culture/geeky glory too!

ENTER TO WIN A PAIR OF WEEKEND PASSES TO THE 2015 EDMONTON EXPO!

Enter my giveaway by leaving a comment in this blog, telling me who or what you are most excited to see/do at this year’s Edmonton Expo. This is mandatory in order to win. When you’ve done that, check it off through the Rafflecopter system below. You can also access additional entries as listed through Rafflecopter!

Good luck and I hope to see you at the 2015 Edmonton Expo!

Linda Hoang is a Canadian blogger based in Edmonton, Alberta, who writes about travel, food lifestyle and pet topics. She's also a seasoned social media/digital strategist with a journalism background. Linda loves exploring the world with her husband Mike, eating their way through cities, supporting local businesses, and photographing Instagrammable Walls. She is the founder of the Edmonton International Cat Festival and a fur-mom to two cats and two dogs.
PrevPreviousSocial Media Notes (#83) – Links for the Week of August 31 – September 6
Next#ExploreEdmonton: Staycation at the West Edmonton Mall World Water ParkNext