Each year, Mike and I go on an annual water park adventure with our friends Rachel and Taylor. There really isn’t a lot of water park options in the Edmonton area – I mean, really there’s only one: at the indoor World Water Park in West Edmonton Mall! Over the years we’ve had some new friends join us but our core four remained the same. This year, Rachel’s cousin Sam came with us!

I love Edmonton and all it has to offer, and wanted to showcase the water park as an #ExploreEdmonton staycation, fun in your backyard kind of activity. I think we (as Edmontonians) probably take for granted how cool it actually is to have a gigantic indoor water park inside of a shopping mall. It’s fairly unheard of but even when I told my officemate my plans for the weekend, he said “Really? People actually go there?” Yes! It’s an awesome outing. 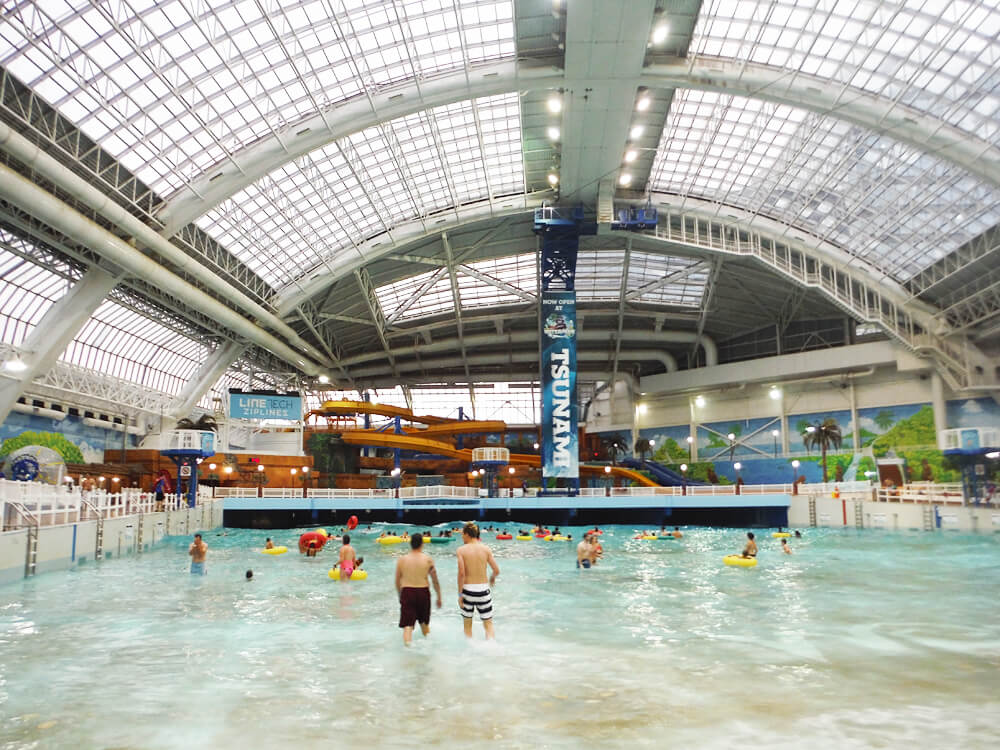 A trip to the World Water Park can be pretty pricy though. It’s certainly not something you could do all the time (that’s why for our case, it’s a really nice annual outing). But there are some ways to save money on admission: 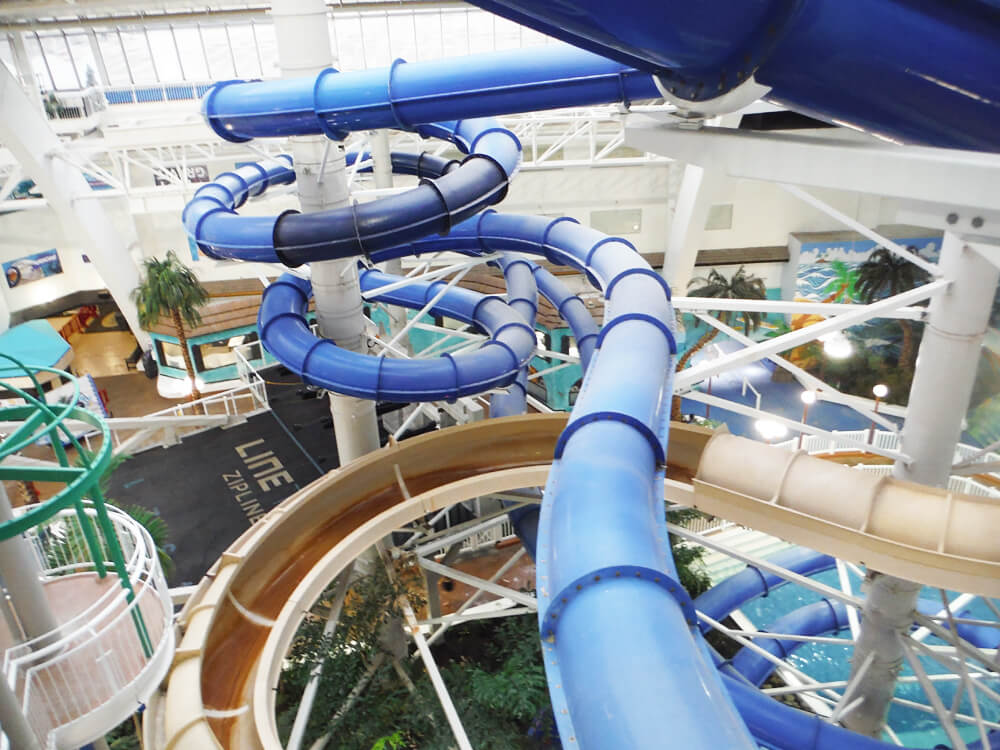 Once you get into the water park, there’s really something for everyone. You’ve got your beginner slides (5 of them), intermediate slides (3 of them), advanced slides (2 of them), and extreme slides/attractions (5 of them). Between the five of us, we’ve tried them all and love them all. There’s also quite simply the really cool wave pool and “beach” area that you could spend a lot of time in – bopping around or laying around, sitting in the hot tubs, eating at the tropical/beach-themed concession stands, and even ziplining across the length of the water park.

(You can see the whole layout and list of slides here). 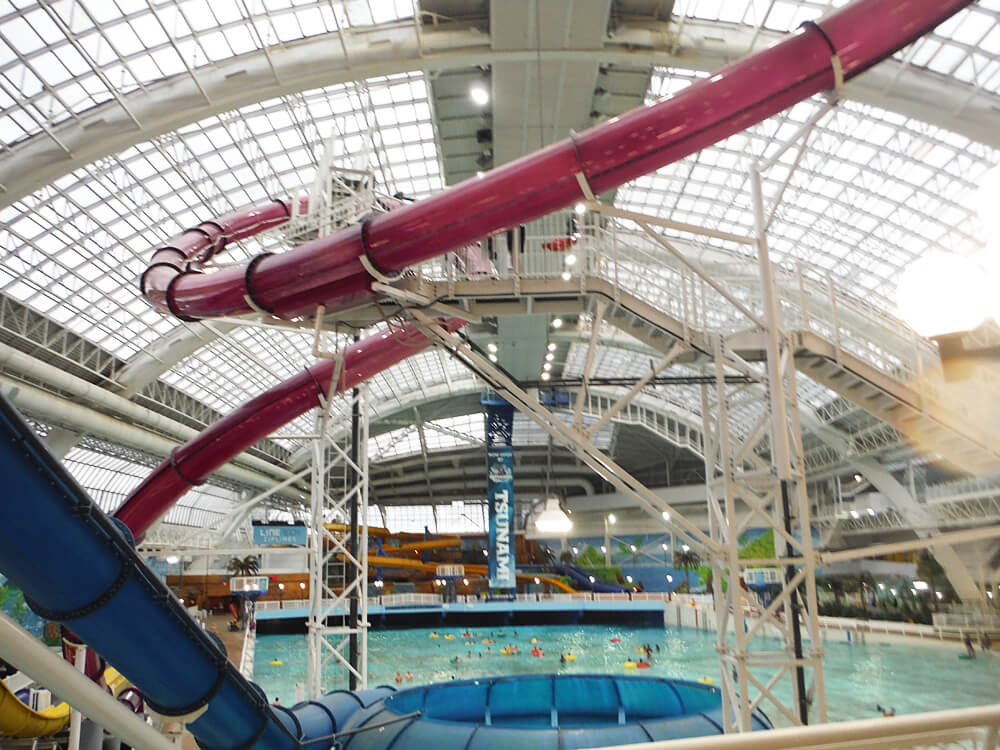 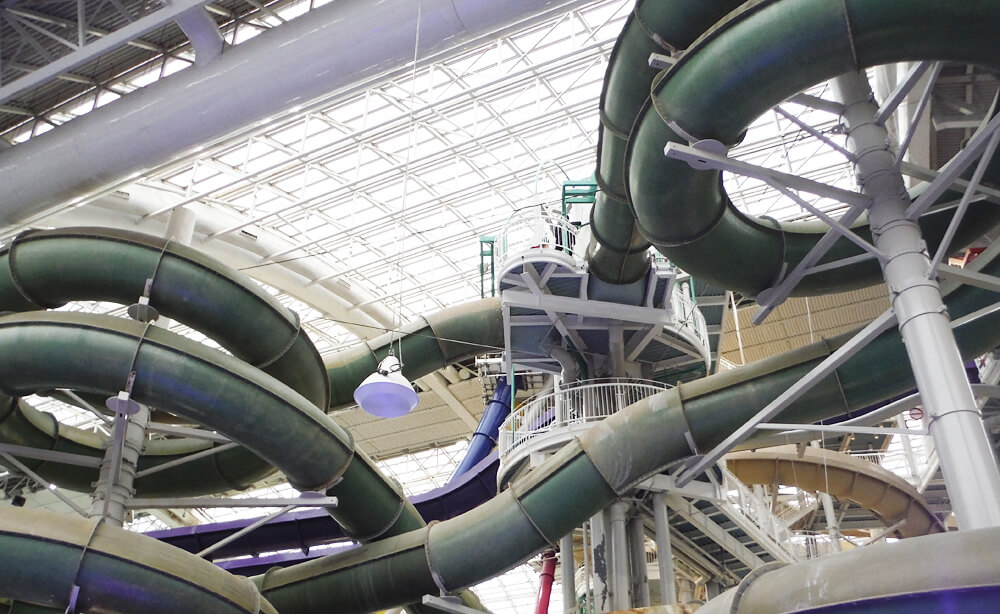 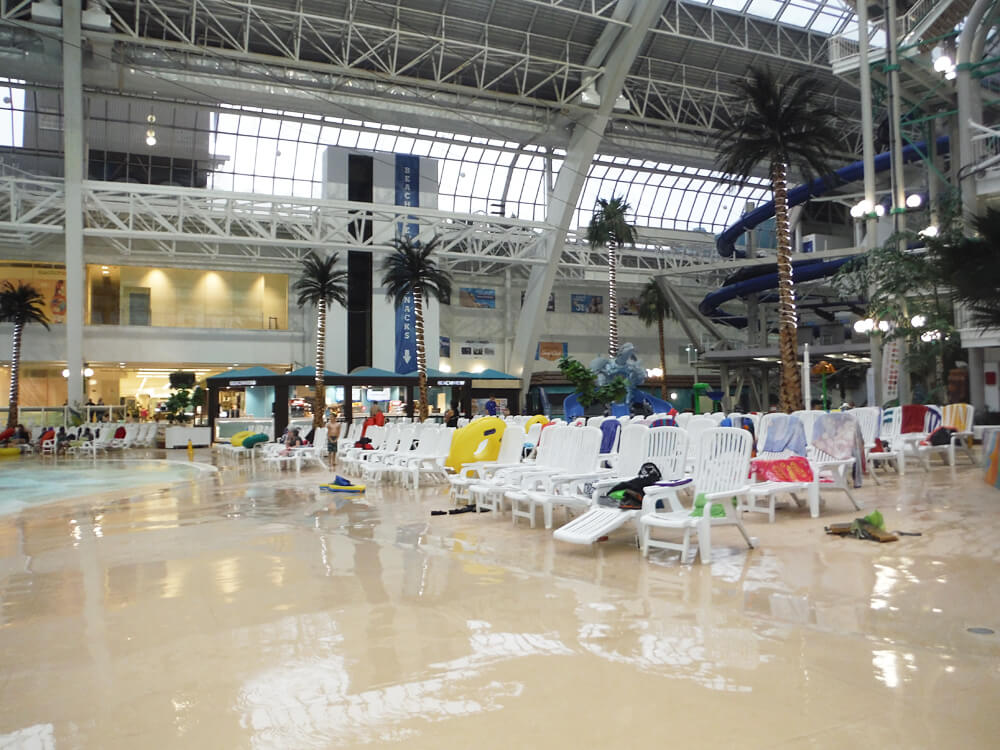 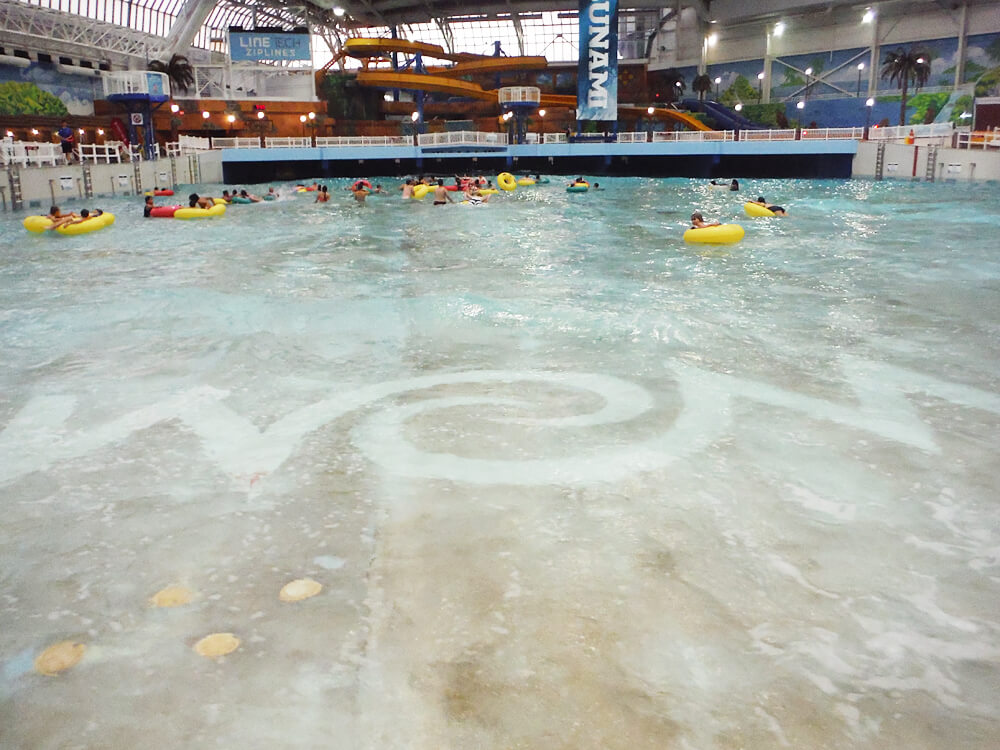 The newest feature at the World Water Park is the Tsunami. It’s a simulated surf ride that opened back in January 2015. It costs additional $$$ on top of your admission, so depending on whether or not you’re able to get a discounted price in, you may or may not be interested (or able) to shell out more money for this attraction, but I think it’s worth trying the half hour for $15 pass at the very least – it really is a LOT of fun. You basically get on a mini surf board and try to stay balanced while water shoots at you. If you ride in the evening, they turn on this awesome lighting too – really cool atmosphere! 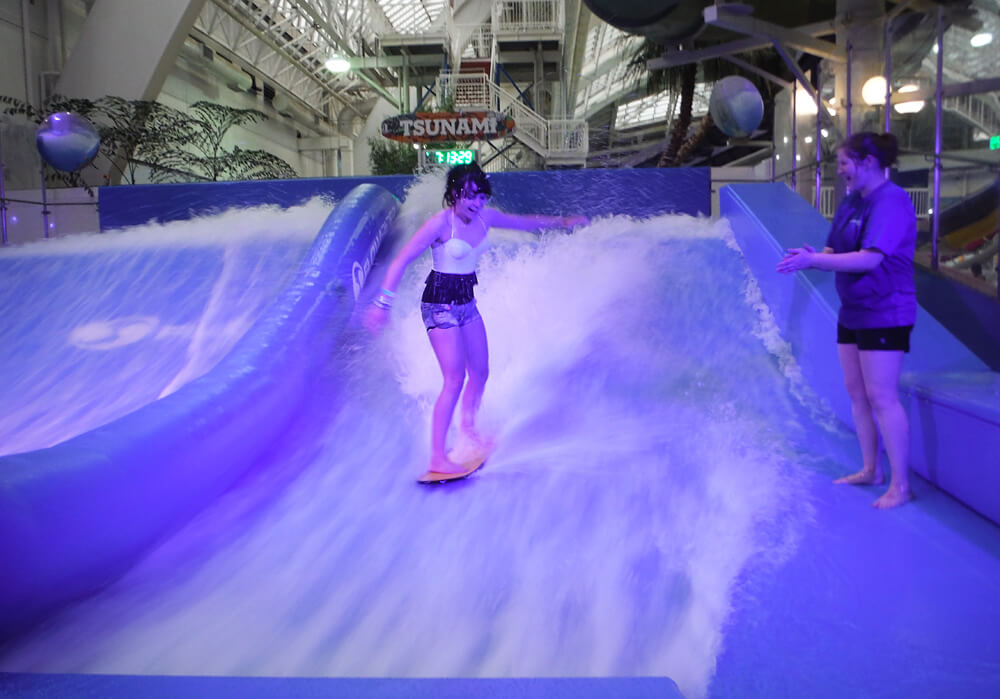 It’s not too hard, and the attendants there are really helpful with getting you out to the middle of the water. You can also use a rope to help with balance to get you started! It’s really a lot of fun but can be a bit painful when (because you will) fall and get shot back and up to the top of the platform. They actually make you sign a waiver because the way you fall and get shot around with the water could actually hurt you (fair warning). Mike and I went surfing for the first time in Oregon this summer and this was a cool way to sort of get back on the board in a more controlled environment. You can also try it with a boogie board lying on your stomach which makes falling and being smacked around by the water less painful, haha. 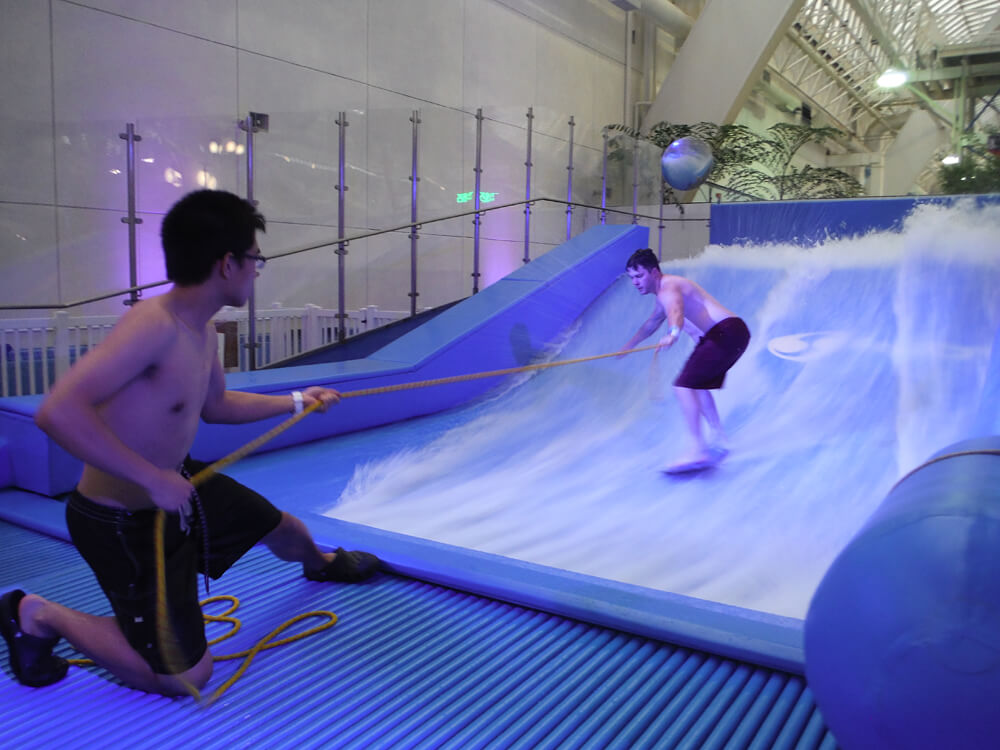 I think $15 for a half hour at the Tsunami is the best value when you look at $10 for just 3 consecutive rides, or $40 for an “all day” pass. Unless you’re planning on literally spending morning to night at the water park, I don’t think $40 (basically the price of admission into the water park) would be worth the Tsunami attraction. You could however also drop $19 for one hour, which might be beneficial if you’re there during a busy time. When we went thankfully, there was no one using the Tsunami! I can’t even count how many times we went on in just a half hour. Even after we left to do a few slides – Sam, Mike, and Taylor all wanted to go back and do more Tsunami surfing. Definitely an awesome new attraction. 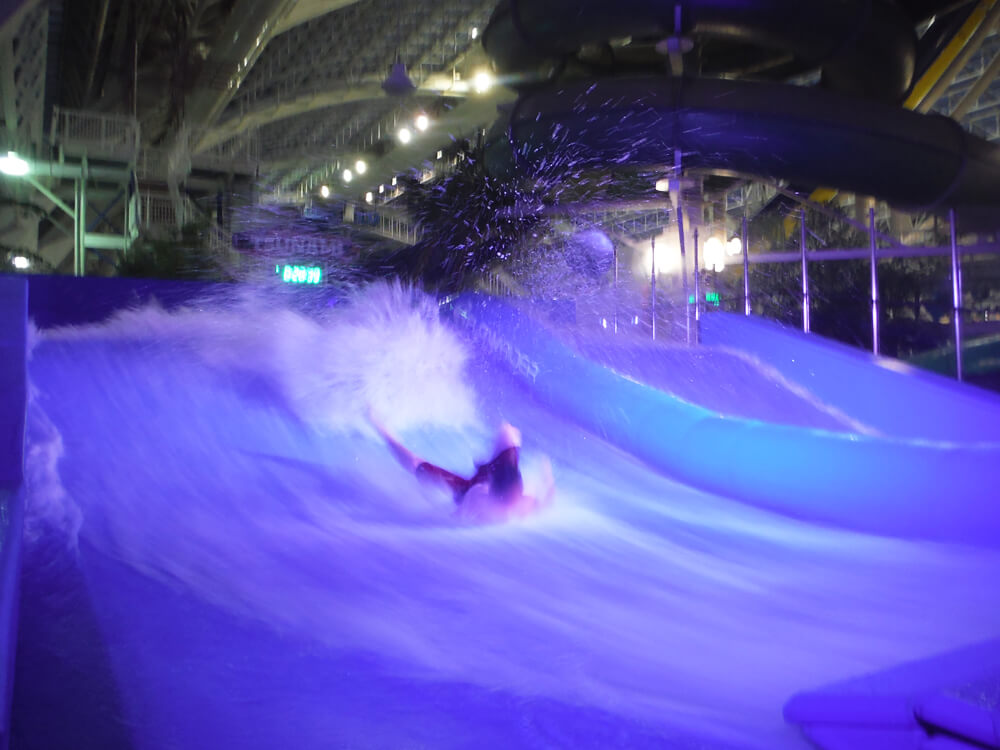 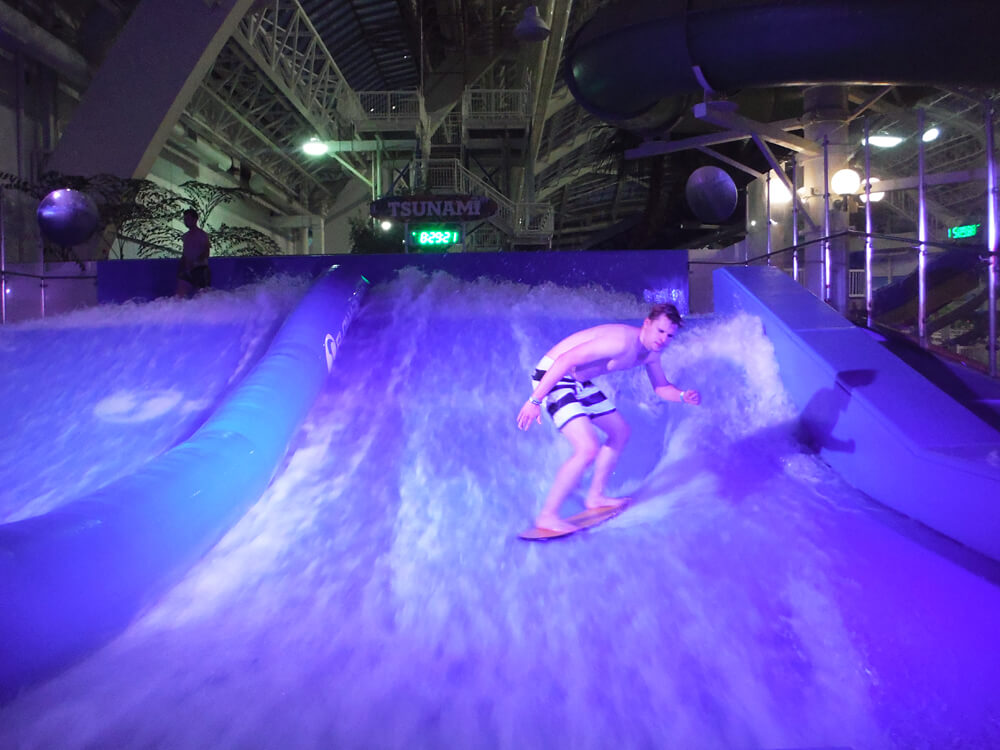 Admission into the water park now includes life jackets, towels ($3 deposit required), swim diapers (for the kiddies), and definitely the most exciting and valuable of all: unlimited refills of the Coca-Cola Freestyle self-service drink machine. 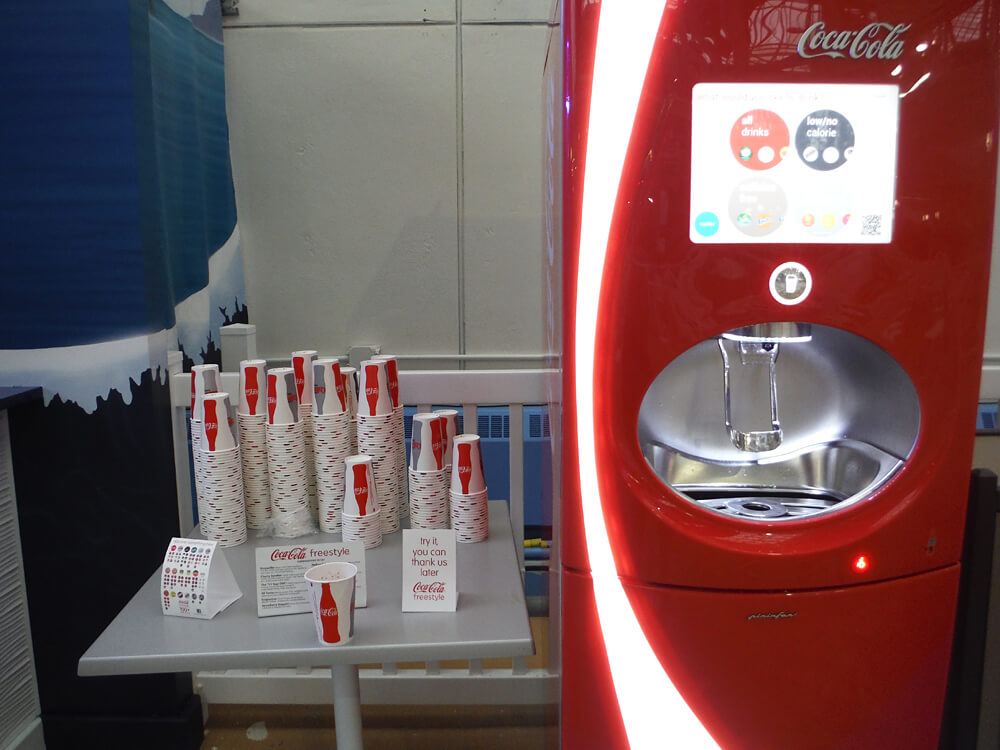 This was our very first experience with Coca-Cola Freestyle. The World Water Park was actually the first location in Alberta to feature the magical machine. These touch screen pop machines basically dish out more than 100 brands of Coke – almost every flavour imaginable and a bunch you’ve probably never even heard of (and can’t find anywhere else – vanilla ginger ale anyone?) 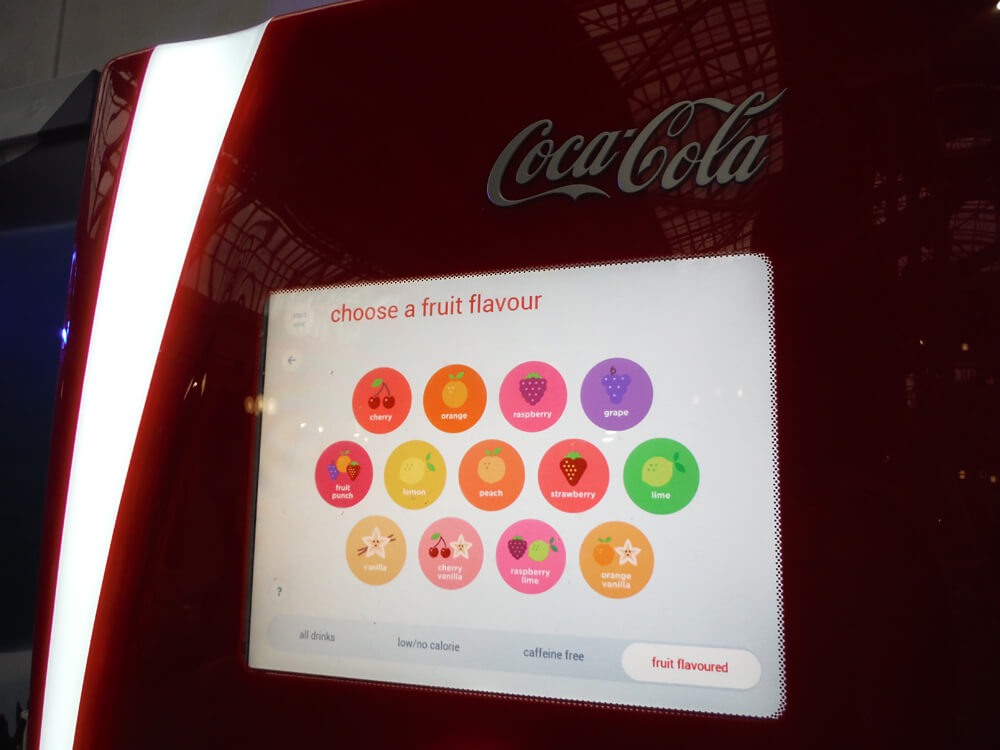 After we hit up a slide we’d hit up a Coca-Cola Freestyle machine for a drink. We did this a number of times throughout the night! It was very convenient, very refreshing, and kind of an attraction of its own (which flavour would we try next?) 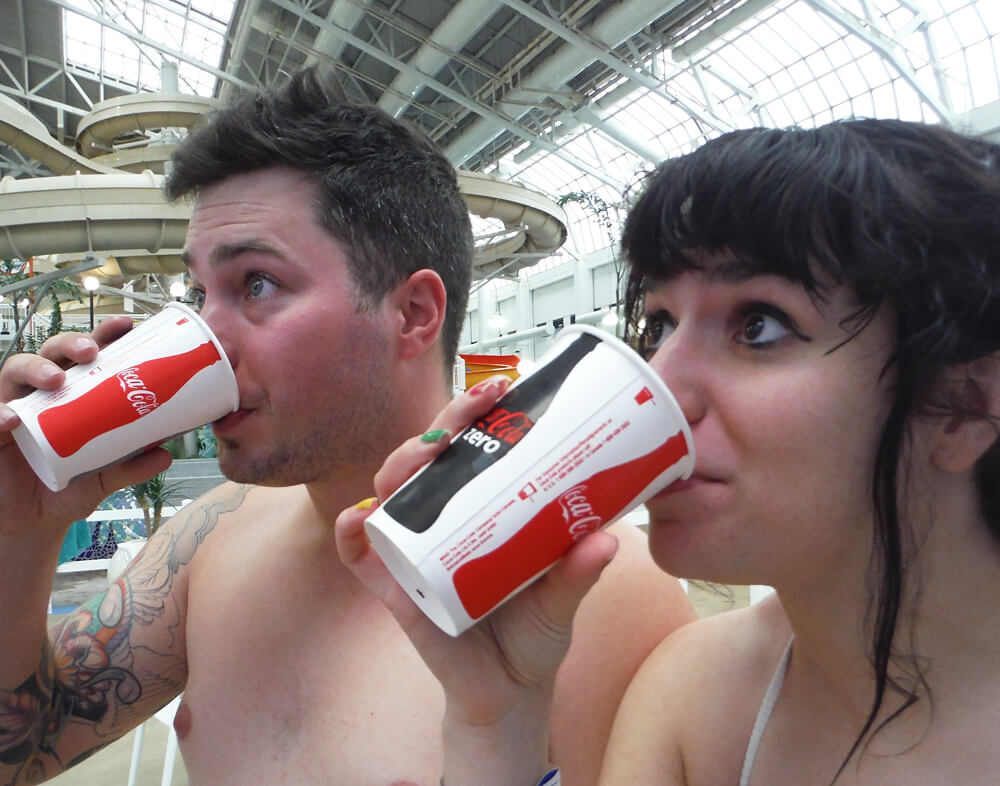 I mentioned the water park zip line – we actually did it last year, not during this trip, but we really enjoyed that attraction too. It’s $15 for one ride or $20 for two rides so might end up being a Tsunami vs. Zip line decision. I think we agreed that Tsunami gives you a bit more fun/value for your $15 (and you’re doing more, it’s way more interactive) than the zip line but on a second trip I’d recommend trying it :-) Who else can say they’ve ziplined over a water park inside a shopping mall? 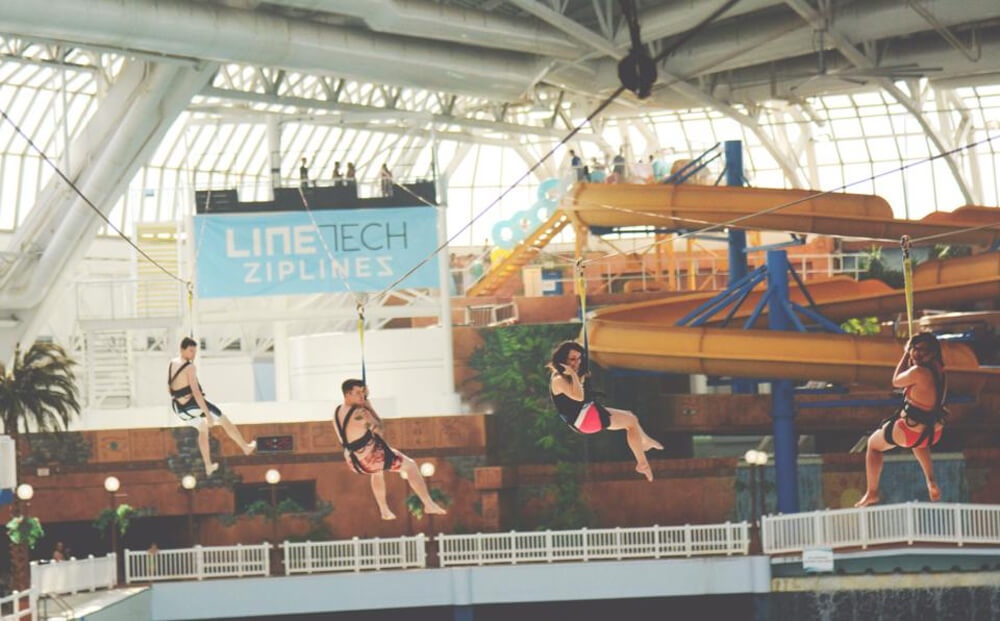 Ziplining over the World Water Park (back in 2014).

Each year, I’ve come to really look forward to our visit to the water park. Because it’s just once a year, I really don’t mind the cost. Plus you do get solid value for your buck – it’s a fun, unique outing – indoors – in your own backyard. The next closest water park outside of Edmonton would be at Sylvan Lake (but that doesn’t run year-round). During one of our past annual water park trips, we visited Edmonton’s outdoor water park Wild Waters on Winterburn Road, which was great but that place shut down permanently a few years ago. 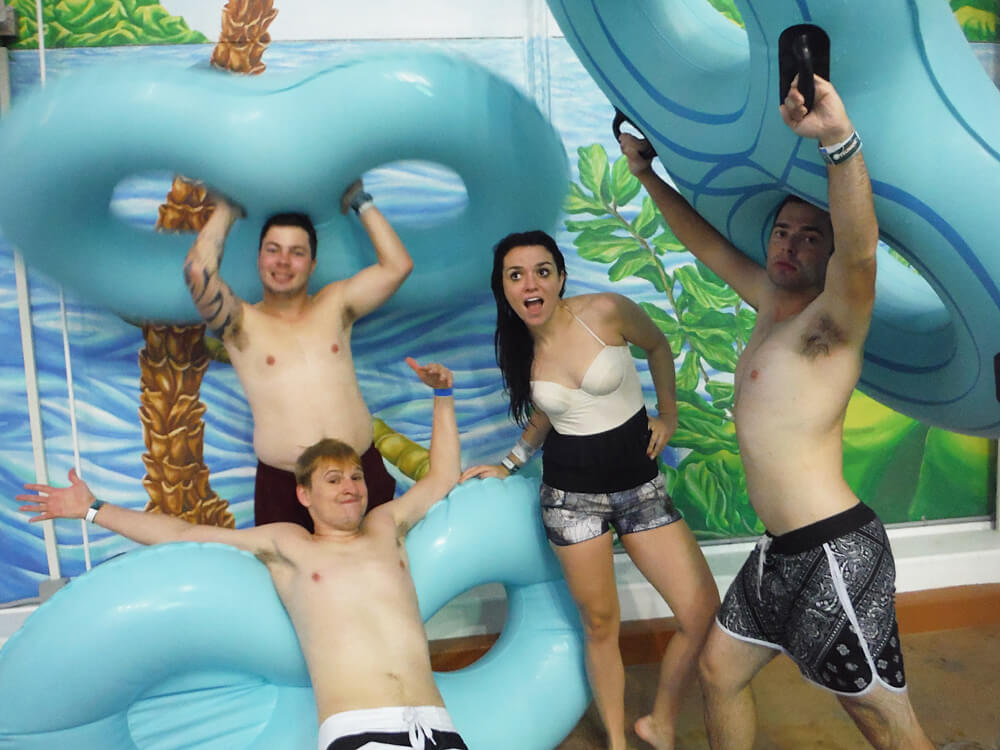 This year we actually spent the most time at the water park than we have in past years – normally we are exhausted after an hour and a half. But because we decided to add the Tsunami into our evening, we were in the water park for nearly a full three hours this time around. A truly solid Friday night to wrap up the summer. 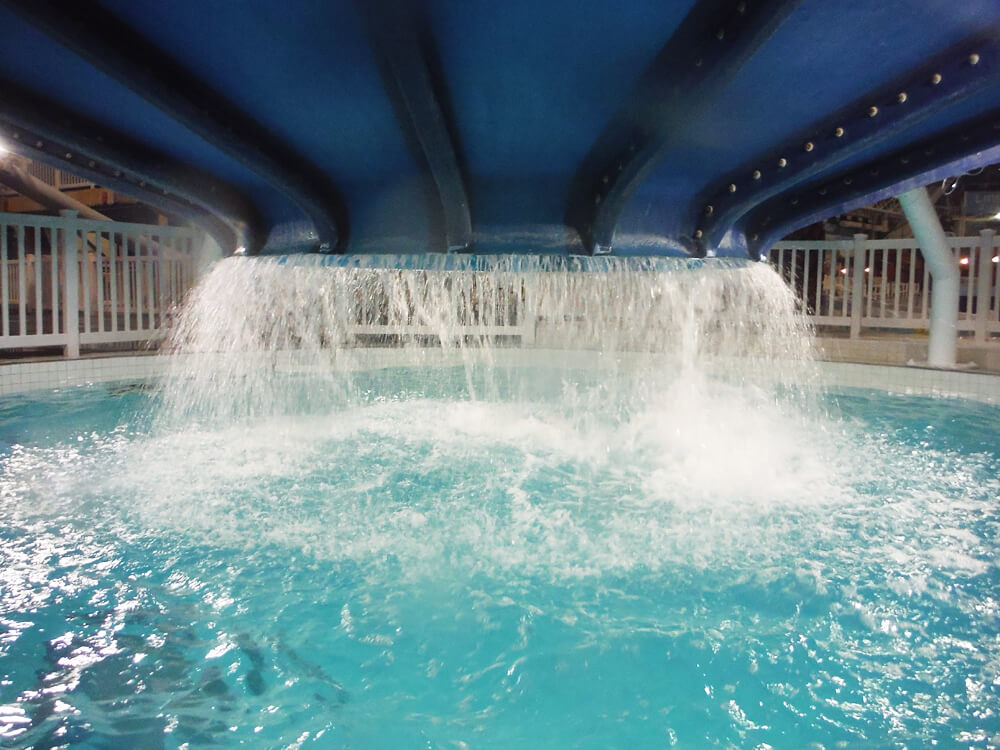 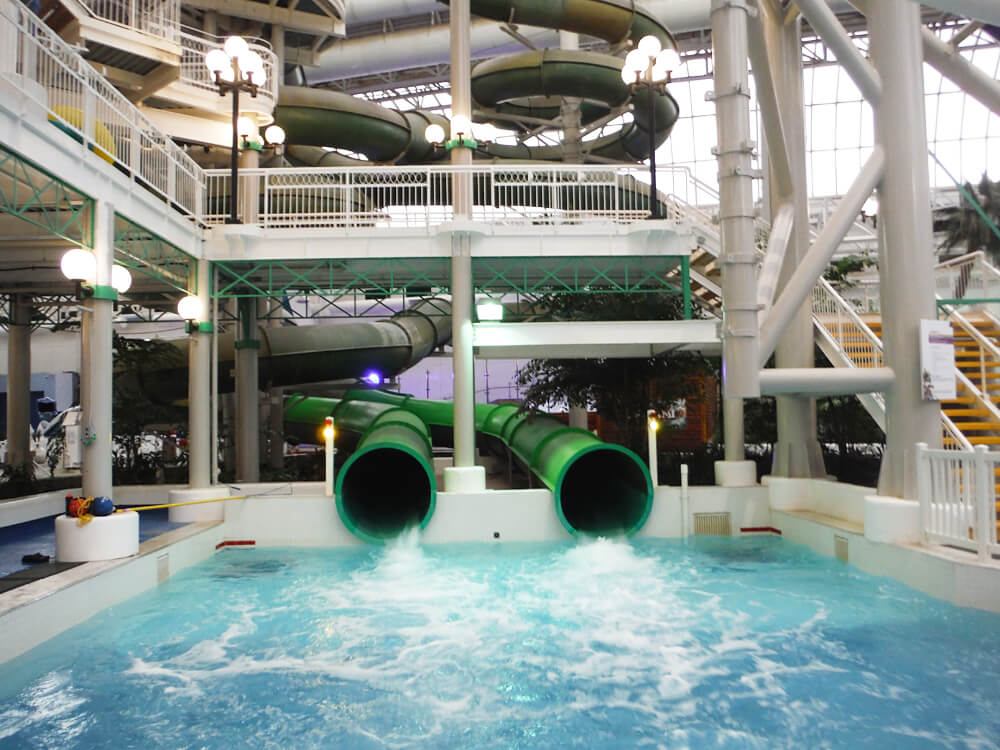 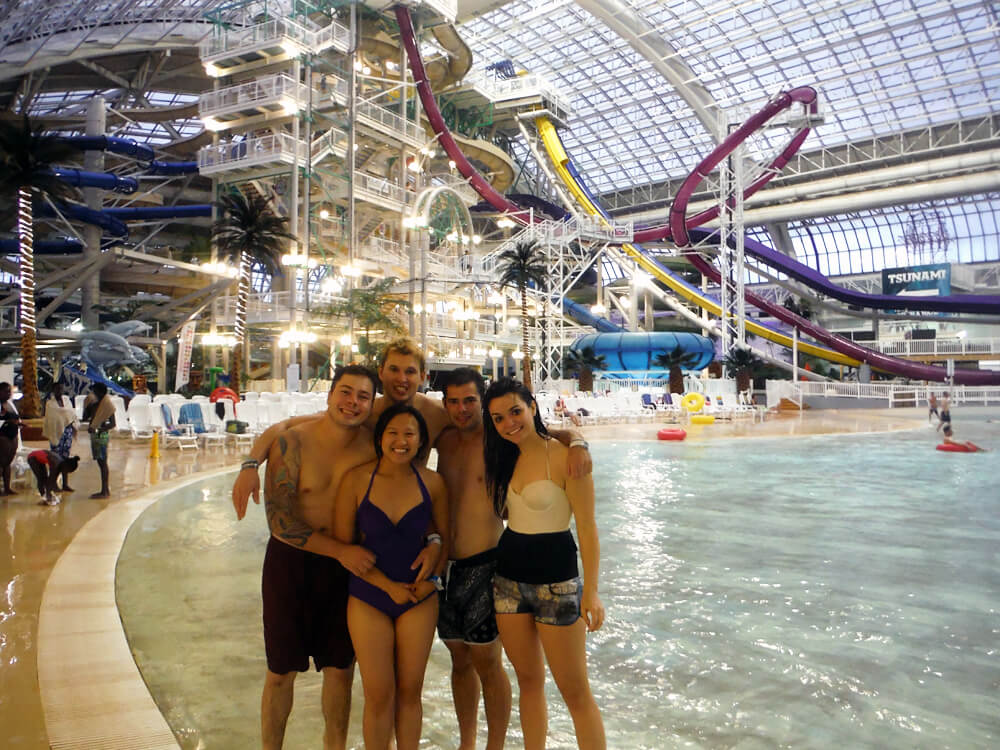 So, do you ever go to the water park? Have you been? What did you think? Leave a comment below!

Disclaimer: I will always provide my 100% honest opinion on this blog. This year’s annual water park trip admission costs and Tsunami passes were covered by West Edmonton Mall, but that did not impact my review or recommendations.

Linda Hoang is a Canadian blogger based in Edmonton, Alberta, who writes about travel, food, lifestyle and pet topics. She's also a seasoned social media/digital strategist with a journalism background, the founder of the Edmonton International Cat Festival and co-founder of Stop Race Based Hate, an online anti-racism education tool. Linda loves exploring the world with her partner Mike, eating their way through cities, supporting local businesses, and photographing Instagrammable Walls. Linda is a fur-mom to two cats and two dogs.
PrevPreviousPreview + Giveaway: Win Weekend Passes to the 2015 Edmonton Expo (Sept 25-27)
NextSocial Media Notes (#84) – Links for the Week of September 7 – 13Next