I’m excited to announce my next round of physically distant Instagrammable Wall Photo Walk & Food Crawl, this time along Old Strathcona / Whyte Avenue August 8 and 9th presented by the Old Strathcona Business Association!

The physically distant walks feature smaller groups (max 10 participants per walk). Participants are encouraged to wear masks and maintain at least a 6 feet distance from one another (this should be easier as it will be outdoors, and there will only be 10 of us). Participants are also encouraged to bring and use hand sanitizer (I will provide hand sanitizer for those who need it). Food items are all to-go, and will be packed individually and can be picked up inside the restaurant one-by-one with limited surface contact.

Because of the smaller groups, I’m offering this walk at four separate times.

The walk dates are:

This is how the tickets will be released:

Bent Arrow has been serving Indigenous children, youth and families in Edmonton and area since 1994 with culture, employment, housing and other programs to help individuals grow spiritually, emotionally, physically and mentally.

THANK YOU to the Old Strathcona Business Association for sponsoring this walk!!!

What you get with your ticket:

Due to physical distancing and a smaller group of participants, no kids tickets are available for this walk. (If you’d like to come with kids, you are welcome, but please purchase a General Admission Ticket). Also max tickets one person can purchase is 2 (due to the smaller group size).

Please note: this is all pandemic pending. Although we are in a reopened stage, if cases climb before the walk dates and things start to shut down, that will impact this walk. Please do not come on this walk if you are sick. Depending on how things go, this event may also be cancelled. Refunds will be issued if the event is cancelled. 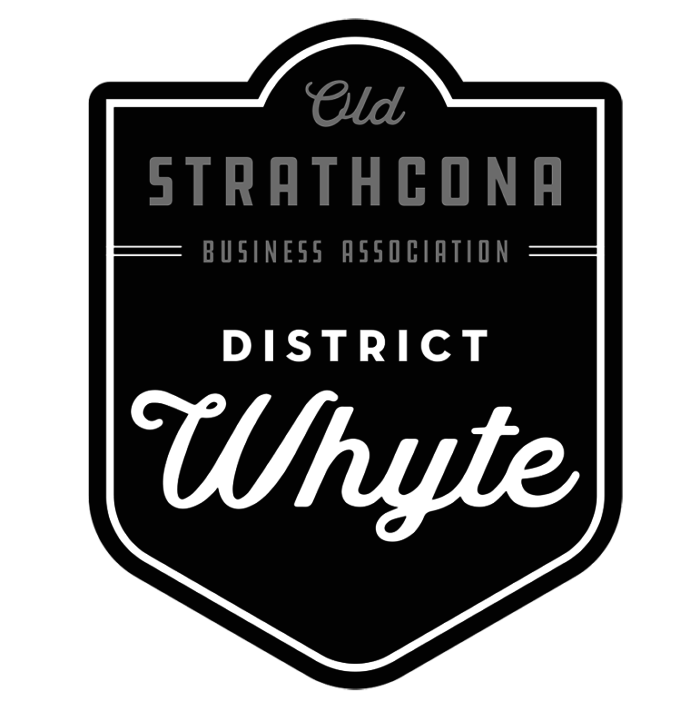 The Old Strathcona Business Association (OSBA)‘s mission is to foster a thriving business district that is inviting to patrons, tourists and businesses. They work to accomplish this by improving things like safety, public space, and beautification of the area through art, flowers and lights. Since the onset of the coronavirus pandemic the association has worked closely with businesses to ensure they have access to valuable resources that serve to strengthen the resiliency of the district; while also advocating for their needs to all levels of government.

This summer, the Old Strathcona Business Association worked with local artist and design studio Amos Kanjer-Nonnekes of DESIGN, et cetera, on a re-painting of the Spur Line Alley (Rainbow Road!), part of a bigger project to enhance the expanded sidewalk space between Gateway Blvd and 105th street. Adding picnic tables, flowers and paint, helps to define the space for pedestrian use and provided both more room to enjoy the avenue, with physical distancing in mind; and additional patio space to accommodate restaurant capacity limits during the pandemic!

Be sure to join the Instagrammable Walls of Edmonton Facebook Group to stay up to date on wall walks, and share any walls you discover as you’re out and about in Edmonton!

You’re also always welcome and encouraged to explore the city on your own self-guided walks year-round too! You can use this Guide to Instagrammable Walls of Edmonton (which includes a fair bit of walls but certainly not all of them, and I’m always behind on new additions!) to help you plan your own exploration.

Instagrammable Walls can be mural walls, bold, colourful walls, graffiti walls, interesting textured-walls—you name it. They are walls that you’d describe as “Instagrammable” (or photographable and shareable online). Instagrammable Walls are not only murals, however there are many murals that are most certainly Instagrammable and in Edmonton, and lots more Instagrammable murals have been added in the city over the years thanks to the efforts of Rust Magic Street Art Festival and Real Fresh Canvas, Next Fest Arts Festival, Edmonton Arts Council, Arts on the Ave, and many more arts-based projects, programs, and independent, local artists or commissions by arts-lovin’ business / building owners (more of that place!)

A Photo Walk is when a group of people get together and walk around a specific location, finding interesting opportunities and areas for taking pictures. On these Instagrammable Wall Photo Walks you’re encouraged to bring your cameras/phones, cute outfits, water, umbrella (just in case with the darn changing weather forecasts!) and comfortable walking shoes!

The first Instagrammable Walls of Edmonton Photo Walk took place on Saturday, June 3, 2017 as part of Make Something Edmonton’s 100 in 1 Day transform your city event. I’ve hosted several walks throughout the years since then, and they’ve also evolved—at the beginning they were primarily just a show & tell of nice photo locations, now they are a much more curated, personal experience where I share information about artists and neighbourhood as well!

I also create Guides to Instagrammable Walls in cities I travel!

Guide to Instagrammable Walls of Edmonton

Guide to Instagrammable Walls of Calgary

Linda Hoang is a Canadian blogger based in Edmonton, Alberta, who writes about travel, food lifestyle and pet topics. She's also a seasoned social media/digital strategist with a journalism background. Linda loves exploring the world with her husband Mike, eating their way through cities, supporting local businesses, and photographing Instagrammable Walls. She is the founder of the Edmonton International Cat Festival and a fur-mom to two cats and two dogs.
PrevPreviousUPDATED Guide to Instagrammable Walls of Medicine Hat
NextSo What Do We Do When Our Adoption Agency Suddenly Closes?Next