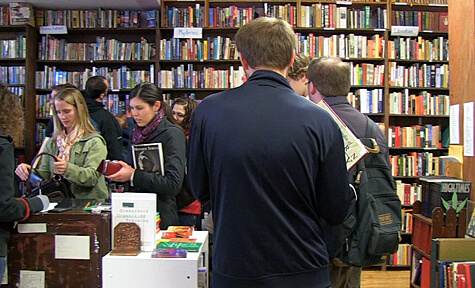 Long lines up at Alhambra Books for Cash Mob Edmonton.

Notes: I still don’t have proper audio equipment so I apologize for the bad audio. Although I do think the audio improved from last time around. :)

“It was unbelievable. It’s never been that busy,” said Josephson, owner of Alhambra Books at 10115 81 Avenue.

She’d just finished spending an hour ringing through customer after customer at the small book store she runs with Monto off Whyte.

“It’s like another Saturday added onto the week and that’s quite a big deal,” Monto said, adding in his 20 years of business he’s never had crowds that big at one time in the store. 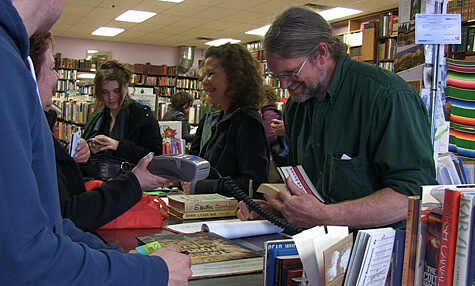 The pair had just been “mobbed” by about 50 people who descended on their local business as part of “Cash Mob Edmonton.”

Monto and Josephson rang up over $1,300 in sales in one hour alone.

Cash Mobs are a spin off of the popular “flash mob” trend. It’s an organized mass spending spree that supports local businesses. It’s spreading from city to city, all around the world and is just the latest in a movement to eat, shop and live locally.

“There’s so many huge corporations with giant marketing budgets that it’s really easy to look over a lot of the locally-owned business,” says Tommy Kalita, co-organizer for Cash Mob Edmonton.

“At the end of the day people can really spend whatever they want but the goal is $20 each and more than anything we want people to really put a spotlight on the business, talk about it on Facebook, Twitter that kind of thing and really raise awareness.” 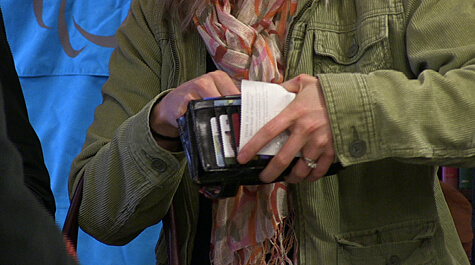 Edmonton’s first Cash Mob happened in March. About 30 people came out to Carbon Environmental Boutique and spent a total of $600. Mobbers then went to a local bakery and wine bar and by the end of the night a total of $1,000 had been put into the three local businesses altogether.

While the Cash Mob is a fun and different way to shop, organizers and store owners say it’s also bringing money back to businesses that really need it, especially at a time when more and more people are heading to big box stores.

“I think there’s a huge advantage to going local with everything that you do if you can,” Kalita says.

“It’s kind of investing in your community as well it’s keeping the money there rather than having it shipped off to another city and another country.”

That investment into communities isn’t a new concept, but has recently become more popular with more people starting to “get it,” says Amy Hayduk with Live Local Alberta.

Live Local Alberta is a non-profit organization dedicated to promoting local business across the province. Hayduk says Cash Mobs are a welcome addition to the local movement. 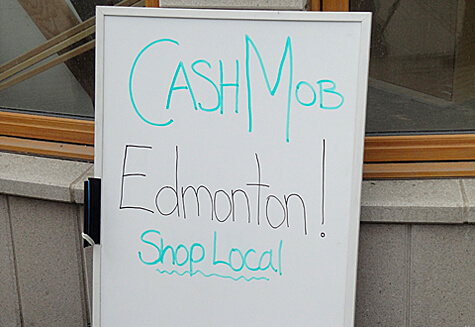 “If nothing else it creates awareness to show the importance of supporting locally,” Hayduk says.

“It’s good to see that the local movement is picking up.”

Hayduk says there are a number of reasons why consumers should buy local including how much value shoppers’ money has when spent at a local business as opposed to a chain.

Various studies show money spent locally is recirculated among the community and produces a ‘multiplier effect’ that positively impacts wage, jobs and taxes.

“When you support a local business, three times more of your money stays in the community versus if you shop at a big box store,” she says. “It makes our local economy stronger.”

Those who participate in the Cash Mob share the same mindset.

“I am a hardcore shop local supporter, support the arts, support the theatre, support eating local, shopping local, that when I heard about this I thought ‘Ah, this is a great idea,'” says Kim Schaeble, who shopped at Alhambra Books as part of the Cash Mob on Wednesday.

Monto and Josephson are thrilled their book store was chosen for the city’s second Cash Mob.

They hope those who took part continue investing in their communities through local shopping.

“I think they’ll disappear if people don’t use them.” 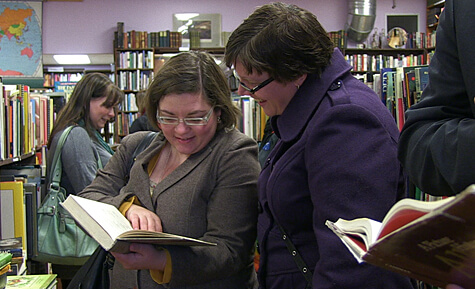 Edmonton organizers hope to hold a Cash Mob each month and they encourage those who are even the slightest bit curious, to come out.

“If you like coming out and meeting people or if you like just supporting something that’s fun and awesome, here’s a way to just go out in the city and discover something new and be with people who are doing the exact same thing,” says Cash Mob co-organizer Monika Czuprysnki.

Linda Hoang is a Canadian blogger based in Edmonton, Alberta, who writes about travel, food, lifestyle and pet topics. She's also a seasoned social media/digital strategist with a journalism background, the founder of the Edmonton International Cat Festival and co-founder of Stop Race Based Hate, an online anti-racism education tool. Linda loves exploring the world with her partner Mike, eating their way through cities, supporting local businesses, and photographing Instagrammable Walls. Linda is a fur-mom to two cats and two dogs.
PrevPreviousPhoto of the Day: Thursday, April 26, 2012
NextStorify: #dearjohn: #yeg breaks up with ‘john’Next