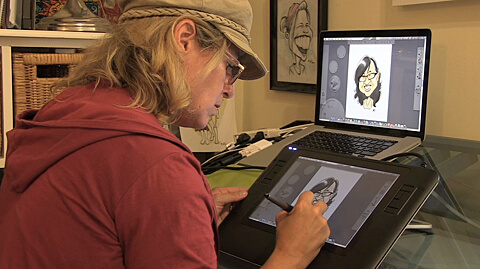 Cathy McMillan is part of a growing number of artists going “digital” – using tablets and other computer art applications to produce their work.

httpvh://youtu.be/9iq-I_d3dHY
* Note: this was the first freelance pack I’ve put together since graduating from NAIT. I used my friend’s Canon XF100 to shoot and Final Cut Pro 7 to edit. Unfortunately there were lav mic audio issues on location and hence the interview audio sounds a bit off. I intend to invest in my own professional video camera this Fall, so hopefully that means more videos to be uploaded and I’ll be able to continue honing my shooting/editing/writing! :)

EDMONTON – Cathy McMillan has been doing caricature art for 27 years.

Her main tools are markers and water colours but after attending the International Society of Caricature Artists conference in Spain in April, and seeing other artists using tablets for their art, McMillan decided to go digital.

She says more and more artists are choosing tablets as their sketchpads these days, largely due to the number of advantages that come with digital art. It’s quicker to produce an image, it’s easier to reproduce and distribute, and there’s the added perk of instant undo.

“When you’re working with water colour or marker or anything like that, you are 100% committed to that line the minute you put it down, and while that’s probably been really good for development, (digital is) really nice and actually relaxing and adds an extra play quality to my drawing,” McMillan said. 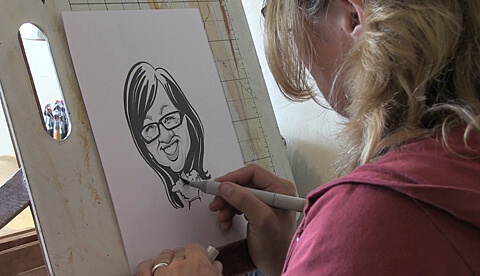 There are a number of advantages of doing digital art, instead of using more traditional platforms, including the ability to “undo” – which then allows the artist to take more risks and be more creative in their work.

“I’ve found with the digital I’ve played a lot more. I’ll do a really courageous line and go ‘no that doesn’t work’ and I’ll erase it or go backwards and that’s a nice thing after so long to have the ability to do that.”

With advice from other digital artists, McMillan began testing out the new platform using her iPhone. She then borrowed a friend’s iPad before making the jump to a tablet specifically designed for artists.

McMillan started with a smaller tablet that forced the artist to look up at the laptop it was connected to in order to see the drawing. She found that functionality didn’t work for her. She ended up purchasing a Wacom 12″ screen Cintiq tablet that allowed artists to view what they were drawing on the tablet itself (although still needs to be connected to a computer).

She sees digital art as a new medium and says at the caricature conference she attended, “digital” was considered in its own art genre.

But some would disagree.

Kim Fjordbotten runs The Paint Spot at 10032 81 Ave., and doesn’t believe the digital impact is quite here yet.

In fact, Fjordbotten thinks digital actually takes away from some of the most important aspects of art.

“When you’re using real tools there are accidents and serendipity and muses that help you. You still need to know that in digital land. I like the accidents and trying new materials and pushing yourself,” Fjordbotten says.

“It’s a tactile feel and I think art will never get away from having the tactile.”

Still Fjordbotten says there does appear to be some growing interest for digital in the art industry, at least for certain types of artists at this point.

“We have recently had someone approach us looking to do digital workshops. I haven’t had a lot of interest in my little sphere but my sphere is not digitally oriented yet. But there is interest out there,” Fjordbotten said.

It’s predicted more than 24 million tablets will sell in the United States alone by the end of the year.

More people are using them for school, work and play.

It’s fast becoming a powerful gaming console and its uses in the art world is only expected to rise.

McMillan and Fjordbotten agree that digital isn’t going to be taking over traditional forms of art.

But McMillan believes digital art is here to stay, and what digital will do now is change how people perceive art.

“People will eventually start to be challenged. Someone does a painting on here, gets it printed onto a canvas – which we can do now – and the challenge is does that mean it’s good art or real art?”

What Fjordbotten is finding most interesting about digital art is its ability for output onto different and new mediums. 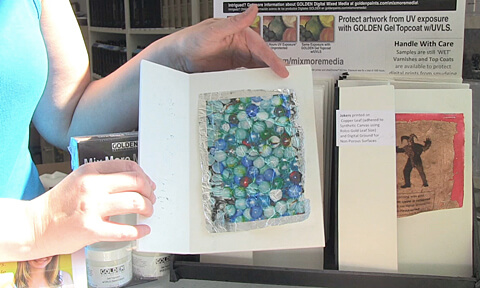 Along with ease of speed and the ability to ‘erase’ when using tablets as platforms for digital art, there are also advantages in digital art output.

“If you’ve got a digital photograph or drawing, now you can output it on fabric, tin foil, you can put it on netting. There’s so many different surface preps, metal, wood, you can also transform it onto traditional print making and that’s really exciting.”

And she thinks digital art uses could open up the industry to more people.

“I watched a group of kids playing with the pottery (application) and I thought it was really good. It’s exposing them to art and now they may have curiosity to maybe go and make an actual pot in pottery,” Fjordbotten said.

While McMillan doesn’t see herself moving completely away from the marker and paper anytime soon, she’s excited about delving further into digital.

She’s currently only using a sketchpad application on her tablet but says she’ll soon dabble into a painting app as well.

“I’m kind of in love with this right now,” she said with a grin.

“I’m shocked actually, I’m not really a technological person but I really enjoy it and I think it’s exciting what can actually happen with it.” 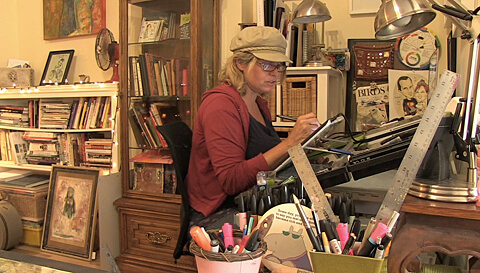 Linda Hoang is a Canadian blogger based in Edmonton, Alberta, who writes about travel, food, lifestyle and pet topics. She's also a seasoned social media/digital strategist with a journalism background, the founder of the Edmonton International Cat Festival and co-founder of Stop Race Based Hate, an online anti-racism education tool. Linda loves exploring the world with her partner Mike, eating their way through cities, supporting local businesses, and photographing Instagrammable Walls. Linda is a fur-mom to two cats and two dogs.
PrevPreviousClicks of the Day: August 19, 20, 21 2011 Weekend Edition!
NextClicks of the Day: Monday, August 22, 2011 Edition!Next