“A month after Millet mother Allyson McConnell was found guilty of manslaughter in the deaths of her two sons, the Crown has filed an appeal, saying the judge made a mistake in finding her not guilty of second-degree murder.”

“Edmonton police are investigating what could be the city’s eighth homicide of the year after a fight reportedly turned deadly on the city’s north end.”

Crazy how higher the homicide number was at this time last year.

“A local science whiz has been named one of four Canadian finalists in the second annual Google Science Fair. Yuhao (Danny) Huang’s prostate cancer research project was one of 90 projects selected this week out of thousands of entries from students in more than 100 countries. “I actually didn’t find out until Google posted the results on their website, so I was surprised myself to see it,” Huang said.”

“Royal wishes were among the many received by the Town of Slave Lake as it marked the one year anniversary of a devastating wildfire. The town posted a brief letter from Prince William and his wife Catherine, the Duchess of Cambridge, on its website Tuesday. The duke and duchess made a two-hour stop in Slave Lake last July as part of their post-wedding tour of Canada. The prince said in his letter, dated May 15 on letterhead from St. James Palace, that the couple remembers the town with admiration. “One year on from the disastrous fire that ravaged your town, Catherine and I send you, the people of Slave Lake, our heartfelt best wishes, in the hope and knowledge that through your fortitude and unquenchable spirit the recovery of your beautiful town is progressing well,” William wrote. “We both remember with such admiration the manner in which this great challenge of nature was met by the people of Slave Lake.””

How extremely thoughtful! :) I love it.

“As a far-flung northern community, Edmonton is sometimes slow to warm to new food concepts. But once we sink our teeth into a trend, we can’t get enough. Need evidence? Look no further than Truck Stop, a mini food-truck festival being held Thursday evenings throughout May in Old Strathcona, right beside the gazebo in the heart of Edmonton’s trendiest district”

We do go hard with trends don’t we, lol. Love the “food truck movement.”

“Taxpayers could be on the hook for more than $1 billion in accumulated severance payments to federal public servants who remain in their jobs, voluntarily quit their positions or retire from government. The eye-popping payout packages are in addition to an estimated $900 million in “workforce adjustment” payments — including 22 weeks pay for one year of service — that will be granted to thousands of federal employees losing their jobs due to federal budget cuts. Combined, the two sets of payments could cost taxpayers $2 billion.”

Of course… aren’t we always on the hook for these things?

“Peter Ross is a world-class scientist and expert on how man-made toxins affect killer whales. By next April, he could also be unemployed along with 74 others across the country. “It’s a disturbing sign for a country that used to pride itself on the scientific research establishment we had” he says. Ross is one of nine people in North Saanich who will lose their jobs when the Department of Fisheries and Oceans shuts down its entire contaminants program, which he says will leave five junior biologists to monitor pollution in Canada’s three oceans. “I can’t think of another country in the world that has a coastline that doesn’t have some form of scientific capacity to look at the threat pollution represents to the health of our oceans.””

“A dying man came “for my children,” a college student said he finally felt “like a citizen of this country,” and an undecided voter was just happy to take part in “a historic” moment. Egyptians turned out in droves Wednesday to take part in the country’s first-ever democratic election of its leader. Fifteen months after the ouster of Hosni Mubarak during the Arab Spring uprising, BBC News reported lines began growing at many polling stations shortly after they opened at 8 a.m. local time (2 a.m. ET).”

“Syria’s oil minister acknowledged the heavy toll international sanctions have taken on the country’s oil sector, saying Wednesday that they had sucked about US$4 billion from the economy. Sufian Allaw said the sanctions levied by the United States and the European Union to put pressure on President Bashar Assad were to blame for the shortages that have left Syrians across the country standing in long lines to pay inflated prices for cooking gas and other products.”

It’s just a mess over there.

“For the first time scientists have succeeded in taking skin cells from heart failure patients and transforming them into healthy, beating heart tissue. The research opens up the possibility of one day being able to use skin to grow the kinds of cells that could repair their own damaged organs.”

“The act of giving ourselves mental messages can help us learn and perform at our best. Researchers have identified the most effective forms of self-talk, collected here — so that the next time you talk to yourself, you know exactly what you should say. Self-talk isn’t just motivational messages like “You can do it!” or “Almost there,” although this internal cheering section can give us confidence. A review of more than two dozen studies, published last year in the journal Perspectives on Psychological Science, found that there’s another kind of mental message that is even more useful, called “instructional self-talk.” This is the kind of running commentary we engage in when we’re carrying out a difficult task, especially one that’s unfamiliar to us.”

“Pregnancy is no time for women to refuse a flu shot since it may bring unexpected benefits to their unborn children, says a new study that analyzed vaccination rates during the 2009 H1N1 pandemic. In addition to protecting pregnant women from the flu, the vaccine also may lower the risk of premature births, stillbirths and underweight babies, according to the study by an Ottawa research team.”

“POM Wonderful, perhaps the best-known purveyor of pomegranate juice, has failed to prove that its tangy thirst-quencher can prevent or reduce the risk of heart disease, prostate cancer and erectile dysfunction, a U.S. judge says… Chappell ruled the company may not say that its products treat or prevent disease unless it ‘possessed and relied upon competent and reliable scientific evidence that is sufficient in quality and quantity based on standards generally accepted in the relevant scientific fields…'”

“After years of Canadians hearing that they need to consume more calcium, a new study suggests calcium supplements might increase their risk of having a heart attack or stroke.”

Typical! (“This is good for you … actually nevermind…”)

“Microsoft CEO Steve Ballmer said during a speech at the Seoul Digital Forum in South Korea that 500 million users are expected to have a device powered by not-yet-released Windows 8 software at the end of 2013. According to an Agence France-Press report, Ballmer believes that its highly-anticipated Windows 8 series will usher in the “rebirth” of Microsoft’s operating systems.”

“From 2003 to 2011, 50 workers died “working on cell sites” and 100 were “killed on communications towers.” The death toll among climbers is roughly 10 times higher than the rate for average construction workers in the U.S, according to a report released byProPublica. The peak of on-the-job deaths correlates with the release and popularity of the iPhone between 2006 and 2008.”

“Four years and $54 million later, the Federal Bureau of Investigation is finally ready to launch a surveillance unit capable of spying on Skype conversations and other Internet communications. The Domestic Communications Assistance Center (DCAC) is a collaborative effort between the FBI, U.S. Marshals Service, and the Drug Enforcement Agency. All three agencies will build customized hardware to enable wiretapping on wireless and Internet conversations per court order requests.”

“Google has crafted another interactive homepage doodle, this one honoring the 78th birthday of Robert Moog, considered by many to be a pioneer in the electronic music space. The playable doodle features his signature Moog synthesizer, with all the accompanying bells and whistles. A quick-start guide on moogmusic.com provides details on how to play the doodle, which also allows users to record their creations and share them with friends.”

“Hewlett Packard Co outlined a plan on Wednesday to lay off roughly 27,000 employees or about 8 percent of its workforce to jumpstart growth. The layoffs, which will be mainly achieved through early retirement offers, will generate annual savings of $3 billion to $3.5 billion as it exits fiscal 2014, the company said.”

That’s a lot of jobs…

“The job market may be bleak, but college graduates of all ages still have high hopes that they will eventually land “impact jobs” that make a difference socially or environmentally.”

“European researchers are planning to use new techniques to analyze DNA that could help crack the mystery of whether Bigfoot exists. In a project announced this week, Oxford University and Lausanne Museum of Zoology scientists appealed to museums, scientists and yeti aficionados to share samples thought to be from the mythical ape-like creature.”

“A British technology firm has created a robotic fish to test waters for pollution… The fish have chemical sensors which can immediately detect pollutants. They are also completely autonomous and do not require a human to remotely steer them.”

“We’ve all been there: Banging the back of a glass ketchup bottle, begging it to give you a dollop of the good stuff or battling with a plastic bottle coercing it into giving up the last of its contents. Maybe that will be a thing of the past. Six MIT researchers say they’ve solved that problem as part of an entrepreneurship competition. The result is a bottle coated with “LiquiGlide,” a non-toxic material so slippery that the ketchup or for that matter mayonaisse just glides out when you turn it over.”

“One Quebecer got sick and two Montreal cats have died after coming into contact with pet food thought to be contaminated with salmonella, causing alarm at a local cat shelter.”

This is extremely upsetting. Also:

“According to updated records kept by the Food and Drug Administration, chicken jerky pet treats from China have sickened nearly 1,000 dogs in the U.S. in recent months. The FDA has logged 900 reports of illnesses and deaths from vets and concerned pet owners since November, when it issued warnings about health problems associated with the products known variously as chicken jerky strips, treats and nuggets.” 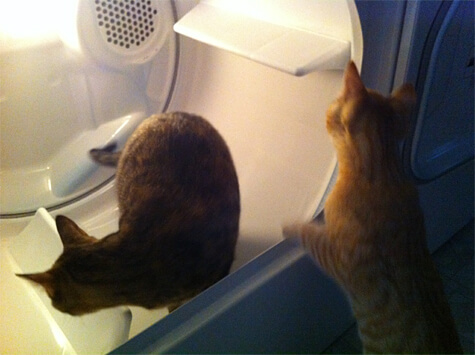 We always have to be careful when doing laundry because of these two trouble makers!

Linda Hoang is a Canadian blogger based in Edmonton, Alberta, who writes about travel, food lifestyle and pet topics. She's also a seasoned social media/digital strategist with a journalism background. Linda loves exploring the world with her husband Mike, eating their way through cities, supporting local businesses, and photographing Instagrammable Walls. She is the founder of the Edmonton International Cat Festival and a fur-mom to two cats and two dogs.
PrevPreviousClicks of the Day: Tuesday, May 22, 2012 Edition!
NextPhoto of the Day: Wednesday, May 23, 2012Next