“An Edmonton-based Mountie has been demoted and fined for disgraceful conduct – including drinking on the job and having sex with subordinates while at work. An RCMP disciplinary board reprimanded Staff Sgt. Don Ray, who had been a member of the behavioural sciences unit at the RCMP headquarters in Edmonton. According to an agreed statement of facts, Ray had kept a bar fridge stocked with liquor in his office – and had regularly offered alcoholic beverages to subordinates. The statement also says he had sex with one subordinate in the RCMP polygraph suite, and also in an unmarked police car, the encounters reportedly dated back to 2006.”

“The man behind one of Canada’s most notorious killings says he is sorry for beheading and eating parts of a Winnipeg man on a Greyhound bus in 2008, but says his schizophrenia lead him to believe he was attacking an alien. Vince Li became known around the world as the man who dismembered and cannibalized fellow bus passenger, Tim McLean. Li was found not criminally responsible for the killing in 2008, and was committed to the secure wing of the Selkirk Mental Health Centre in Manitoba. Recently, Li made headlines when a review board granted him permission to leave the hospital premises for short escorted trips into the neighbouring town of Selkirk. The ruling sparked outrage from members of the public, including the victim’s mother.”

“Tens of thousands of protesters marched through Montreal to mark 100 days of student demonstrations against a hike in tuition and a new law aimed at curbing the revolt. While the march was largely a peaceful one throughout the day, after 10 p.m. police began firing tear gas into the crowd, CTV’s Daniele Hamamdjian tweeted.”

“The gap between the rich and the poor in Canada is getting wider and could eventually lead to an economic collapse, according to a new report by a left-wing think-tank. Income for middle-class Canadians has remained stagnate since the 1980s, while the income of the richest 1% has increased dramatically, according to Dalhousie economist Lars Osberg. As a result, Canada’s income inequality has reached a level not seen since the 1920s, says Canadian Centre for Policy Alternatives. A few people accumulating huge savings while most people rack up debt is a recipe for disaster, the report argues.”

“If an expectant mother hopes to limit her chances of giving birth to an abnormally large baby, new research suggests her wisest course of action would be to control her own weight both before and during her pregnancy. The study, published Tuesday in the Canadian Medical Association Journal, challenges a growing consensus in the scientific community that elevated glucose levels in the mother are primarily responsible for overly large babies, a condition known as macrosomia.”

So I shouldn’t pig out when I am preggers, lol.

“Harping on people ad nauseam to lose weight is rather “sadistic,” there’s little evidence the treatment of obesity works and even the benefits of weight loss are debatable. In arguments like these, being played out in the official journal of the College of Family Physicians of Canada, doctors are debating whether it’s futile to try to treat obesity. “The few patients who manage to lose weight and keep it off achieve something truly remarkable. From a public health standpoint, however, the treatment of obesity is a failure,” writes Dr. Jana Havrankova, of Clinique familiale Saint-Lambert in Quebec, in the current edition of Canadian Family Physician.”

“Snicker if you want, but a recent study shows that a larger number of people feel how attractive they are depends part on the car they drive. According to The CarCourting Report, a study commissioned by autoTRADER.ca and conducted by Angus Reid Forum, more than one third of Canadians under the age of 35 say that driving a sexy vehicle makes them feel more attractive.”

“After waiting months for the go-ahead to say so, Google CEO Larry Page today announced that his company now officially owns Motorola Mobility. Google announced plans to acquire Motorola Mobility for $12.5 billion in August. Upon doing so, the companies had to clear regulatory hurdles to get the deal done. Regulators in both the U.S. and the European Union approved the acquisition back in February, but the companies were forced to wait for China. Over the weekend, China approved the deal, paving the way for Google to close it.”

“Facebook shares sank 11 per cent in the first day of trading without the full support of the company’s underwriters, leaving some investors down almost 25 per cent from where they were Friday and driving others to switch back to more established stocks. Facebook’s debut was beset by problems, so much so that Nasdaq said on Monday it was changing its IPO procedures. That may comfort companies considering a listing, but does it little for Facebook, whose lead underwriter, Morgan Stanley, had to step in and defend the $38 offering price on the open market.”

It’ll bounce back, give it some time!

“It’s a mistake small-business growth specialist Ryan Caligiuri sees all the time: A company decides it needs to play catch-up because it hasn’t gotten into the social media game yet. So managers hire an intern to do it. “I think that’s one of the biggest knocks on social media and why people don’t give it much respect,” Mr. Caligiuri says. “You hire an intern and say, ‘Go ahead and tweet and start engaging.’ Pawning it off on the intern might seem like a cheap way to create a social profile, says the Winnipeg-based Mr. Caligiuri, but it’s unlikely to reward you with results.”

“Switching off your cellphone during a flight will soon be a thing of the past, according to aviation experts, who are tipping in-flight mobile connectivity to become a standard feature of air travel. Virgin Atlantic recently announced that passengers can make calls on their cellphones on the airline’s Airbus A330 and Boeing 747 flying between London and New York. Call charges are similar to international roaming rates, and phones cannot be used during take off and landing. But Virgin Atlantic isn’t alone — more than 100 other aircraft are currently equipped to allow calls to be made in the air.”

“The world’s tallest tower and Japan’s biggest new landmark, the Tokyo Skytree, opened to the public on Tuesday. Nearly 8,000 visitors were expected to take high-speed elevators up to the observation decks of the 634-metre tower to mark its opening. Some reportedly waited in line more than a week to get the coveted tickets for a panoramic view, though Tuesday ended up being cloudy in Tokyo.” 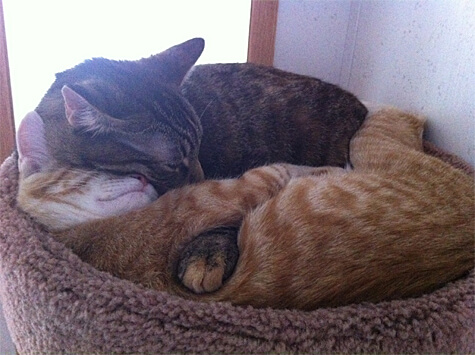 Linda Hoang is a Canadian blogger based in Edmonton, Alberta, who writes about travel, food lifestyle and pet topics. She's also a seasoned social media/digital strategist with a journalism background. Linda loves exploring the world with her husband Mike, eating their way through cities, supporting local businesses, and photographing Instagrammable Walls. She is the founder of the Edmonton International Cat Festival and a fur-mom to two cats and two dogs.
PrevPreviousPhoto of the Day: Tuesday, May 22, 2012
NextClicks of the Day: Wednesday, May 23, 2012 Edition!Next