“Cineplex Entertainment says it will open the company’s first Alberta VIP movie theatre in Edmonton on April 20. Cineplex Odeon Windermere and VIP Cinemas will be an 11-screen, 49,000-square-foot theatre at the Currents of Windermere shopping development near Terwillegar Drive and Anthony Henday Drive. Three of the auditoriums will be VIP Cinemas – a premium, adults-only movie-going experience. For a charge of up to $10 more for a 3-D movie, moviegoers receive reserved seating in large leather seats with more legroom and movable tray tables. VIP customers can also order from in-seat menu service.”

“Edmonton homeowner Crystal Sherris wants to keep her backyard chickens but the city’s bylaw enforcement branch is crying fowl. She is one of an unknown number of Edmontonians who keep hens in defiance of the animal licensing control bylaw. Some raise chickens for the eggs, and because they make pleasant pets. Others appreciate their gardening value; chickens eat weeds, bugs and slugs, and also deposit rich manure, known to be among the best animal fertilizers available.”

Great story. I was planning on doing a Feature Story on this one. So interesting!

“Sick and dying Canadians can apply to Health Canada for a licence to use marijuana to ease their symptoms, but an exclusive Global News investigation has learned drug dealers are hijacking the licencing process.”

“The U.S. soldier accused of killing 17 Afghan civilians suffered a traumatic incident during his second tour in Iraq that triggered “tremendous depression,” his lawyer said Wednesday. Lawyer John Henry Browne said he could not discuss the details of the matter because it remains classified. But he expects the issue to become a focal point in the case against Army Staff Sgt. Robert Bales.”

Despite the horror that he’s charged with, can’t imagine his tours over there were walks in the park. I do feel sorry for him.

“Here is what everyone should know about the case…”

“Brussels sprouts, a nation turns its noses up to you. Such is the scenario at dinner tables across the country, with a report finding today’s generation of kids is widely setting the mealtime agenda. In fact, even as 72 per cent of Canadian moms agree their dishes should be more nutritious, 76 per cent put taste before health when preparing a meal. Studies suggest an undesirable food generally needs to be reintroduced between 10 and 30 times before a child will eat it without complaint. Freedhoff says the key is to have kids try at least one bite but not force-feed the full serving if it doesn’t agree with them.”

“Studies have hinted that diet-soda lovers could face higher risks of diabetes and heart disease, but new findings suggest that overall diet may be what matters most in the end. Several studies have found that people who regularly down diet soda are more likely than people who don’t to have certain risk factors for those chronic diseases — like high blood pressure and high blood sugar. And one recent study became the first to link the beverages to the risk of actual heart attacks and strokes. Still, researchers have not been able to say whether it’s the sugar-free drinks, themselves, that deserve the blame. Many factors separate diet- and regular-beverage drinkers — and, for that matter, people who stick with water. Overall diet is one.”

Still water is probably better for ya, lol.

“People in Europe drink more alcohol than in any other part of the world, downing the equivalent of 12.5 litres of pure alcohol a year or almost three glasses of wine a day, according to report by the World Health Organization and the European Commission. But while the title of world’s heaviest drinkers goes to the European Union as whole, where consumption is almost double the world average, there are also wide variations in drinking levels between sub-regions, as well as big differences in how frequently, where and when people drink.”

Lol probably didn’t need a study to tell us this one.

“Twitter users are being affected by a bug which is causing them to ‘unfollow’ fellow tweeters without their permission. The bug is causing Twitter users to randomly unfollow people without account holders’ prior consent or knowledge. Twitter has advised affected people to visit its support page and go to fellow tweeters’ profile pages to check whether they are still following them or not.”

This bug has really been bothering me!! Glad they’re finally admitting to it but hopefully a fix will be made shortly.

“Google’s cloud storage service that looks to compete directly with Dropbox may launch during the first week of April, according to a report from GigaOm. Google Drive will apparently allocate 1GB of storage to users for free, and additional options will be available for a fee. Dropbox, the market leader in cloud storage, currently offers 2GB of free storage.”

More competition should be good for us consumers :D

“On average, Facebook users spent more than 10.5 billion minutes per day on Facebook during January 2012, excluding mobile devices. This comes out to 12 minutes and 26 seconds per user.”

I’d say I’m above average for time spent on Facebook then, lol.

“In today’s digital age, many people use the internet to read reviews, before trying out a new restaurant or business. Many sites offer consumers the chance to write reviews, good or bad, for any business. Some businesses believe this isn’t necessarily a good system, especially when it comes to the website “Yelp.” Yelp has an automated review filter that is designed to catch fake or bad-natured reviews. Staff members will also delete posts that violate the company’s terms and conditions. A few local business owners say yelp is filtering out a little too much.”

Remember to take all online reviews with a grain of salt ;)

“When Jeremy Lin said he harbored no ill feelings over a racially insensitive headline about him that appeared on ESPN, he meant it. Lin recently had lunch with the editor who was fired for writing the headline during the height of Linsanity with the New York Knicks in February. Anthony Federico apologized after the incident and Newsday’s Anthony Rieber reports that the meeting came at the instigation of the Asian-American point guard.”

“The 9 to 5 is dead, but we’re still harnessing workers with its outdated strictures. Happy workers are more healthy and more creative, so it’s time to start giving our workers the leeway to be happy (because otherwise they work all the time). The secret: Treat them like people.”

“Brian Roberts, Comcast Chairman and CEO, announced this morning that his company and NBCUniversal would commit to hire 1,000 veterans as part of the Hiring our Heroes campaign… The 1,000 positions will be filled over the next three years.”

“Astronomers hunting for rocky planets with the right temperature to support life estimate there may be tens of billions of them in our galaxy alone. A European team said on Wednesday that about 40 percent of red dwarf stars–the most common type in the Milky Way–have a so-called “super-Earth” planet orbiting in a habitable zone that would allow water to flow on the surface. Since there are around 160 billion red dwarfs in the Milky Way, the number of worlds that are potentially warm enough and wet enough to support life is enormous.”

“An ancient beast related to today’s Arctic-loving beluga whales and narwhals seemed to prefer toasty, tropical waters. Called Bohaskaia monodontoides, the new species of toothed whale lived some 3 million to 4 million years ago during the Pliocene in warm water. Researchers aren’t sure why modern belugas have left these tropical destinations and strayed pole-ward, where life would seem to be more difficult.”

Cool. Love fossils and learning about what used to roam our world.

“Grab your dog and a glass of Scotch, and toast to this classy bit of news. Nearly eight years after Anchorman: The Legend of Ron Burgundy hit theaters comes word that anchorman Ron Burgundy will return to the big screen for a sequel.”

Huge news to a lot of people, lol. I watched Anchorman after its original craze so it was never really as huge for me but should still be a fun movie! Haha.

“The Grinch returned all those stolen presents. Now the family of Dr. Seuss (Theodore Geisel) is hoping that the person or persons who took a Lorax statue from the garden of the late, great author’s home also has a change of heart.”

Evil! Who could steal The Lorax from Dr. Seuss’ family :(

“After George, the two-year-old Basset Hound from West Yorkshire, England got so tangled in a phone cord that he began choking, the frantic pup somehow managed to alert authorities by dialing 999 — the British equivalent to 911, the Sun reports. Concerned by the heavy breathing on the other end, the emergency operator dispatched police to the home. Since George’s owners, Steve Brown and his daughter Lydia, weren’t home, their neighbor let the police into the house, where George was choking on the living room floor.”

Wow what a story!

“A baby squirrel gets separated from his family, but luckily finds a home with a cat that just had a litter of kittens. Now the squirrel is just part of the family, and has even learned to purr.” 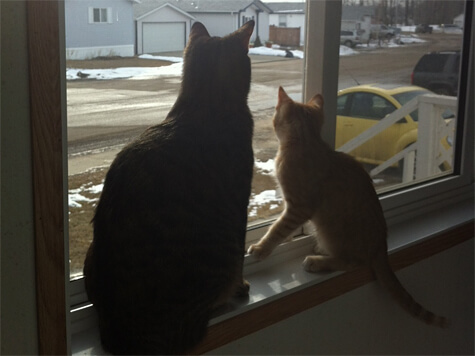 Linda Hoang is a Canadian blogger based in Edmonton, Alberta, who writes about travel, food lifestyle and pet topics. She's also a seasoned social media/digital strategist with a journalism background. Linda loves exploring the world with her husband Mike, eating their way through cities, supporting local businesses, and photographing Instagrammable Walls. She is the founder of the Edmonton International Cat Festival and a fur-mom to two cats and two dogs.
PrevPreviousClicks of the Day: Tuesday, March 27, 2012 Edition!
NextClicks of the Day: Thursday, March 29, 2012 Edition!Next