“Mark Twitchell has abandoned his attempt to appeal his first-degree murder conviction, bringing finality to the lurid, bizarre Edmonton case that made international headlines. From his prison cell in Saskatchewan, Twitchell filed a notice of abandonment of his appeal in February, according to Alberta Justice. Twitchell, 32, will now have to serve his entire life sentence for the murder of 38-year-old Johnny Altinger in October 2008.”

Including “job cuts: 19,200 federal positions to be eliminated, or 4.8 per cent of the federal workforce” – “CBC to lose 10 per cent of annual funding” – “$50 million over two years to provide job skills training for young people” and more.

“The humble one-cent piece is set to disappear from Canadian pockets, a victim of inflation. Thursday’s federal budget said the Royal Canadian Mint will strike the last of the little coins this fall… Pennies will still be legal tender, but as they slowly vanish from circulation, prices will have to be rounded up or down.”

Bye bye penny! Along with such phrases as ‘penny-pincher,’ ‘penny for your thoughts,’ and ‘here’s my two cents…’ :)

“No matter where you are on the political spectrum, no matter how your party is doing in the public opinion polls, there is one number in the recent Leger Marketing poll that is cause for optimism. When asked “how likely are you to vote in the upcoming provincial election,” 60 per cent of Albertans said “extremely likely.” Another 24 per cent said “very likely.” Add them together and you get 84 per cent of Albertans saying they’ll likely vote. For the first time in decades, we have a race. Actually, we have races. In past Alberta elections, the outcome was so skewed to the Conservatives that journalists would struggle to find a dozen ridings to watch, a dozen ridings where the race was in doubt. This time the majority of ridings look like they’re up for grabs. We’re struggling to find a dozen where the Conservatives are safe.”

“References to albinos on restaurant menus are offensive and a violation of human rights. So says Peter Ash and Ikponwosa Ero, who both have albinism. They have filed a complaint with the British Columbia Human Rights Tribunal to be heard later this year. The complaint seeks to have Earls Restaurants remove albino rhino beer and albino chicken wings from their menus and advertisements. ‘People aren’t allowed to order Alzheimer’s appetizers, multiple sclerosis martinis and cerebral palsy cocktails, so why should they be able to order albino chicken wings?’ said Ash on Tuesday.”

I cannot believe this.

“”I’ve done it. I need help to bury a body.” Such disturbing text messages warning of a murder have surfaced on cellphones across eastern Ontario but police say they’re a hoax. Ontario Provincial Police are sounding the alarm about the suspicious cellphone texts after more than a dozen morbid messages led concerned recipients to call police.”

“Zimmerman told police that he shot 17-year-old Trayvon Martin on Feb. 26 after Martin attacked him. His attorney has said Zimmerman’s nose was broken in the fight and the back of his head was gashed. A lawyer for Martin’s family says the video clearly shows that Zimmerman’s nose wasn’t broken and he had no noticeable blood on his head and face.”

“About one in 88 children in the United States has autism or a related disorder, the highest estimate to date and one that is sure to revive a national argument over how the condition is diagnosed and treated. The estimate released on Thursday by the Centers for Disease Control and Prevention represents an overall increase of 25 per cent since the last analysis in 2006 and a near-doubling of the reported rate in 2002. Among boys, the rate of autism spectrum disorders is one in 54, almost five times that of girls, in whom the rate is one in 252.”

“Images of bony hipbones, concave stomachs, and quotes like “Nothing tastes as good as skinny feels” are popping up on social networks. The images are part of a new Internet phenomenon – “Thinspiration” – that young women with eating disorders are using to support their unhealthy lifestyles.”

“Bilingualism helps protect the aging brain and may even postpone signs of dementia, a new review of recent studies indicates. The paper by Canadian researchers, published Thursday, suggests that bilingual people have higher cognitive reserves as they get older. Higher cognitive reserve is associated with a lower risk of Alzheimer’s and other memory-destroying dementias.”

“French scientists say they have confirmed the folklore that a glass in your hand will make you feel sexier, smarter and funnier, even when others privately think you are a turkey… ‘Our study shows that the mere fact of believing that you have drunk alcohol makes you feel more attractive… The alcohol dose has no effect in itself.'”

“The next-generation PlayStation console will display resolutions up to 4096-by-2160 and show 3D games in 1080p, but it may render second-hand games useless, according to an online report. Games would only be accessible for the purported new console, codenamed Orbis, on brand new discs or as downloads from the PlayStation Network. New discs would require online authentication via PSN and then be locked to the account of a single user, according to Kotaku.”

“What if you could take all those tweets you blast out during the day and ruminate on them in a place where your mind is free to wander and relax. Introducing Shitter, a new startup that, for just $35, will turn your tweet stream into four rolls of toilet paper. The homepage tagline reads, “Social media has never been so disposable.””

“Electronics retailer Best Buy has announced that it will close 50 big box retailers, cut 400 jobs in the corporate and support area and open 100 mobile locations by fiscal year 2013. The company plans to save $800 million by 2015.”

“Jim Balsillie, the brash, hockey-loving executive who helped build Research in Motion (TSX:RIM) into a global force with the BlackBerry smartphones, is retiring from the struggling technology company as its new CEO considers options that could include putting RIM up for sale — although that’s not the priority. The announcement, symbolic of the changes afoot at RIM, came along with a financial report that fell short of analysts’ already low expectations on Thursday.”

Ouch. But sure feels like the changes they’ve been working towards hasn’t really resulted in any improvements to the company, lol.

“Canadian newspaper publishers scrambling to get their news online face a stark reality – more than half of their readers still rely on printing presses and newsprint for their daily news hit. A study by the Newspaper Audience Databank examined stats from 62 Canadian weekly and daily newspapers and found that 58 per cent of readers only read print and that print readership has held steady over the last several years.”

Pft who said print was dying??

“Minneapolis-St. Paul International Airport (MSP) is the latest to embrace “relaxation rooms.” These so-called relaxation rooms are like mini-hotel rooms, rentable by the hour. The rooms are about the size of a small office and include bedding, television, Internet access and desks. All the makings of a temporary stay, at a price of $30 for the first hour, $7.50 per additional quarter hour, and $120 for an overnight stay. A bathroom is not included as customers will have to use airport facilities.”

Where there are people with money, there will be such things to spend money on frivolously.

“Hundreds of critically endangered orangutans in western Indonesia could be wiped out by the year’s end if palm oil companies keep setting land-clearing fires in their peat swamp forests, conservationists warned Thursday. ‘They are just barely hanging on’ … ‘We are currently watching a global tragedy.'”

This is disgusting. Yet another example of how mankind is destroying this planet.

“Don’t mess with Japanese honeybees. Not only do they cooperate to attack their enemies, researchers now say their brains may actually be processing and responding to the threat. When confronted with their arch-enemy, the aggressive giant Asian hornet, the honeybees will attack it by swarming en masse around the hornet and forming what scientists call a “hot defensive bee ball” – a move unique to their species. With up to 500 bees all vibrating their flight muscles at once, the bee ball cooks the hornet to death.”

“Scientists have obtained a fascinating new insight into the evolution of humans and our ability to walk. It comes from the fossilised bones of a foot that were discovered in Ethiopia and dated to be 3.4 million years old… It is a significant discovery because it demonstrates there was more than one pre-human species living in East Africa between three and four million years ago, each with its own method of moving around.”

“In an effort to eliminate potential “unpleasant emotions” among students, the New York Department of Education has placed a ban on mentions of “birthdays,” “dinosaurs,” “Halloween,” and “dancing,” in city-issued tests, the New York Post reports. According to the paper, the mandate is meant to curb fear that references to those topics might stir controversy among students. The department is also banning mentions of “divorce” and “disease,” in case students have loved ones who are separated or suffering from an illness. “Slavery” is also flagged and “terrorism” is considered too scary.”

This is unbelievably ridiculous.

“Boy band 98 Degrees is reuniting for a summer after 10 years, RumorFix reports. 98 Degrees — Nick Lachey, Drew Lachey, Jeff Timmons and Justin Jeffre — is supposedly set to go on a 15-city tour this summer between July and August. Rumors of the boy band reuniting began after their website was updated for the first time in nearly a decade.”

“A remix of President Obama’s speeches, presentations and media events set to LMFAO’s ‘Sexy and I Know It.'”

This is hilarious and amazing. Kudos to the editor. Even just the act of downloading and going through and organizing all of those files merits applause, lol.

“Want to get a taste of what it felt like being on the Titanic, sans the part where it sunk into the ocean? A restaurant in Houston is offering what it calls the Titanic Experience: a 10-course meal comprised of similar dishes served to the ill-fated ship’s first class passengers the night they met their demise… the Titanic Experience comes with the sky-high price tag of $12,000.”

Wow. This appeals to me in no way, lol.

Lol. Another example of something silly you can purchase if you’ve got loads of monies.

“Toronto’s fashion industry is bracing itself for a new trend in men’s accessories – man heels.”

“The idea is to create a little cardboard figure of yourself. You can customise it on the Foldable.Me website and it can then be sent anywhere in the world on your behalf. The tiny effigies stand 8cm high and are fun gift to send to friends with minimal fuss. Scissors and glue are not required for assembly and they’re not too tricky to make up.”

Super cute. I want to create a foldable.me! :D 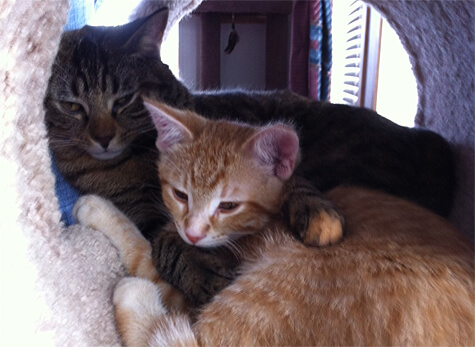 Linda Hoang is a Canadian blogger based in Edmonton, Alberta, who writes about travel, food lifestyle and pet topics. She's also a seasoned social media/digital strategist with a journalism background. Linda loves exploring the world with her husband Mike, eating their way through cities, supporting local businesses, and photographing Instagrammable Walls. She is the founder of the Edmonton International Cat Festival and a fur-mom to two cats and two dogs.
PrevPreviousClicks of the Day: Wednesday, March 28, 2012 Edition!
NextReview: Original Joe’sNext