“Residents of a number of central Alberta communities have begun a massive clean-up effort, after a massive storm – which some said included a tornado – tore through the area Tuesday afternoon. CTV News has learned at least two farms suffered major damages to a number of structures.”

“Comic book collectors will have all eyes on Edmonton, Alta. this month, when 2,000 rare items will go on sale in a private auction at the end of July. From three coveted entries in the 1960s series, “The Fantastic Four,” to the first issue of Marvel Comics’ “The Avengers,” the mint finds included in this auction surfaced recently thanks to an anonymous collector. The collection dates back decades and includes more than 6,000 valuable items… The upcoming sale is expected to fetch as much as $80,000 from bidders.”

I’m glad his head’s been found. Some relief for his family I’m sure… Magnotta’s hearing is still so far away though.

“Five people died in a hostage-taking drama on Wednesday in the southwestern city of Karlsruhe, the police said. The hostage taker, a 53-year-old man, was facing eviction from the apartment he shared with his 55-year-old girlfriend after she lost it in a foreclosure auction in April, the police said. The man took his own life after killing his girlfriend, a bailiff, a locksmith and the new owner of the apartment, said the police.”

“Iran has threatened to destroy US military bases across the Middle East and target Israel within minutes of being attacked, Iranian media reported on Wednesday, as Revolutionary Guards extended test-firing of ballistic missiles into a third day. Israel has hinted it may attack Iran if diplomacy fails to secure a halt to its disputed nuclear energy programme. The United States also has mooted military action as a last-resort option but has frequently nudged the Israelis to give time for intensified economic sanctions to work against Iran.”

“Responding to a welfare complaint from a neighbor Monday, authorities were shocked when they entered a Kentucky home to find 19 children living in squalor with no parental supervision. Deputies said the children, who ranged in age from 8 months to 14 years, were living in the Bowling Green home with no food or working air conditioner, according to a news release by the Warren County Sheriff’s Office.”

“Officials in an Oregon town have canceled its annual fireworks show out of concern the pyrotechnics will scare the protected sea birds roosting in the area According to Fox News, the town of Depoe Bay canceled its annual fireworks show in a decision on July 3. This came after federal wildlife managers, who applied pressure to town officials, stating the noise disrupts the birds. The cancelation has upset many businesses because they’ll lose foot traffic from visitors coming to see the fireworks show.”

I’m happy about this. :) Finally caring about the animals over ‘visitors coming to see the fireworks show.’

“Ancient underground roads have been discovered in Greece’s second-largest city. Archaeologists in Thessaloniki uncovered a 230-foot section on Monday of an ancient road built 1,800 years ago by the Romans in the city’s main travel artery.”

“A mysterious and seemingly fast-acting illness has killed more than 60 young children in Cambodia in three months. Now, the World Health Organization is saying it is investigating. The Cambodian Health Ministry and the World Health Organization released a joint statement Wednesday that said they are investigating the disease, which causes a high fever, severe breathing problems and neurological symptoms. At least 62 children under the age of seven have been admitted to hospitals in Cambodia with the illness. Of them, 61 have died within one to two days of hospital admission. Most were under the age of three.”

“A leading U.S. cancer lobby group is urging the Surgeon General to conduct a sweeping study of the impact of sugar-sweetened beverages on consumer health, saying such drinks play major role in the nation’s obesity crisis and require a U.S. action plan.”

Probably a good idea to look into it.

“Teens are much more likely to try alcohol, cigarettes, and other drugs for the first time during the summer months, according to a new survey. Researchers found first-time use of these substances, as well as marijuana and hallucinogens, peaks during June and July with thousands more youths trying them each day compared to other months.”

Best not to try it all, teens!

“They grow in a secret location in northern Israel. A tall fence, security cameras and an armed guard protect them from criminals. A hint of their sweet-scented blossom carries in the air: rows and rows of cannabis plants, as far as the eye can see. It is here, at a medical marijuana plantation atop the hills of the Galilee, where researchers say they have developed marijuana that can be used to ease the symptoms of some ailments without getting patients high.”

“Rumors of a mythological miniature Apple tablet–smaller than the iPad but larger than the iPhone–have been circulating on the Internet for a while now, but if two new reports in the Wall Street Journal and Bloomberg are to be believed, the myth will become a reality by the end of the year. On Wednesday, both the Wall Street Journal and Bloomberg reported that a smaller Apple tablet may be on the market by the year’s end.”

Too much tech, lol.

“Whether they had a falling out with a friend or were seeking revenge against someone who shared a similarly bad picture, one-fourth of women admitted to having tagged unflattering photos of their friends on Facebook, according to a new survey from photo gifting site MyMemory.”

“Netflix, the internet video streaming company, boasts they are world’s leading internet subscription service for watching movies and TV programs after they seem to be gaining back popularity. After achieving over a billion monthly views, Netflix CEO, Reed Hastings, posted a thank you to chief content officer Ted Sarandos on his facebook account.”

We recently re-subscribed to Netflix after we downsized our TV channels on Shaw, lol.

“This aspect of the decision should largely eliminate fears that linking to copyright materials somehow raises potential legal risks. Last year, the Supreme Court of Canada ruled against attributing a defamation claim to such links and now the Federal Court has concluded that links to authorized postings cannot be said to constitute unauthorized communication and therefore infringement. For Internet users accustomed to posting, linking, tweeting, pinning, or otherwise communicating the news of the day online, they can breathe a sigh of relief as the decision sends a strong signal that such activities fall within the law.”

“All that atom-smashing in Europe’s $10 billion Large Hadron Collider has paid off in a big discovery that scientists say helps explain another mystery of the universe.”

This is apparently a huge deal, lol. (over my head)

“Seabirds eat everything from twine, candy wrappers and Styrofoam, and their stomach contents show there’s been a dramatic increase in plastic pollution off the Pacific Northwest coast in the last four decades, a new study suggests.”

“The colossal black hole at the center of our Milky Way galaxy will soon to get a big, tasty meal, astronomers say. A humongous gas cloud is on a collision course for the Milky Way’s core — the home of Sagittarius A* (pronounced “Sagittarius A-star”), which scientists suspect is a supermassive black hole with the mass of 4 million suns. When the huge gas cloud arrives in the vicinity, which it will appear to us to do in mid-2013, scientists say it will surely be swallowed up by the hungry black hole.”

“In a cosmic case of “now-you-see-it, now-you-don’t,” a brilliant disk of dust around a Sun-like star has suddenly vanished, and the scientists who observed the disappearance aren’t sure about what happened.”

“The cover image for J. K. Rowling’s first adult novel has been revealed by the author’s British publishers, Little, Brown… The 512-page book tells the tale of an idyllic English town being ripped apart during a parish council election, which is brought about by the untimely death of one of it’s members, Barry Fairbrother.”

“Amateur photographer Ben Torode’s new kitten “finally made it to the top of its scratching pole.” The rest of the gallery is equally killer.” 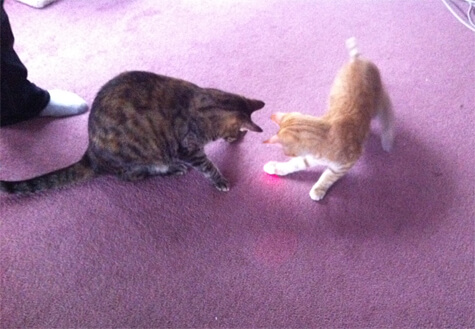 We finally got them a laser pointer. The vet suggested it would be in Thor’s best interest if we did (to get her to lose weight lol)

Linda Hoang is a Canadian blogger based in Edmonton, Alberta, who writes about travel, food, lifestyle and pet topics. She's also a seasoned social media/digital strategist with a journalism background, the founder of the Edmonton International Cat Festival and co-founder of Stop Race Based Hate, an online anti-racism education tool. Linda loves exploring the world with her partner Mike, eating their way through cities, supporting local businesses, and photographing Instagrammable Walls. Linda is a fur-mom to two cats and two dogs.
PrevPreviousClicks of the Day: Tuesday, July 3, 2012 Edition!
NextNews Online: Woman hit while jogging in northeast Edmonton talks about her recoveryNext