“I’ll admit I’m not a podcast “expert,” but I’m pretty sure live show recordings with a sell-out audience are few and far between. To mark their third season finale, The Unknown Studio hosts and co-producers, Adam Rozenhart (@bingofuel) and Scott C. Bourgeois (@scottybomb), put together a live show last Wednesday at Happy Harbor Comics featuring local talent, including musicians, a comedian, an author and much more.”

So fun! Glad it was a success. Love when people take chances and try things like this (and love when others support it!)

“For one Edmonton-area family, July 3 marks a sombre anniversary – it was on that day two years ago, that Lyle and Marie McCann were last seen alive.
“We go about our daily life, but always with a heavy heart,” Bret McCann, the couple’s son said Tuesday. “There’s always that burning question, we just don’t know what happened to my parents.” The last time the couple was seen alive, was at a gas station in St. Albert on July 3, 2010 – as Lyle McCann pumped gas into the couple’s RV, ahead of their planned road trip into B.C. along Yellowhead Trail.”

I hope they figure out what happened to them.

“The Edmonton Police Service will not punish an officer who shot a man four times after the man stabbed his police dog. In a 90-page decision released Tuesday, retired Insp. Paul Manuel cleared Sgt. Bruce Edwards of misconduct for a July 27, 2006 incident in which Edwards fired seven shots at Calgarian Kirk Steele, hitting him four times. Manuel wrote in his decision the use of lethal force “was not only appropriate, it was the only available option for Sergeant Edwards.””

If anyone ever stabbed my cats…

“Albertan individualism came up against the sizable Quebec state this week, as an oil rig worker making a Terry Fox-style trek across the country to raise $1-million for an Edmonton children’s hospital was arrested after arguing with police about his route. Curtis Hargrove spent several hours in jail, and then had to chase down four teenagers who stole the Canadian flag from his RV. But one bad day in a stretch of 45 good ones has earned the Cold Lake man a surge of support from Canadians who heard of his ordeal — he’s received a flood of donations, more than 700 likes on his Facebook page and now has a decent shot at winning $100,000 in a Scotia Bank Gamechanger contest since the arrest at 2 p.m. Monday.”

“The Famous 5 are officially Edmonton giants after a mural was made public Tuesday, depicting the women behind the Persons Case. The painting, attached to the side of a parking garage at 10027 102nd St., shows Irene Parlby, Nellie McClung, Henrietta Muir Edwards, Emily Murphy and Louise McKinney, along with scenes of marches for women’s rights. The five Alberta activists won a 1929 legal case declaring women “persons” eligible to sit in the Senate, a major step in the move toward gender equality.”

“Ta-da! Today we launch Capital Ideas, where Edmonton’s entrepreneurs help each other by sharing what they know. We’re building a community of business owners who have expertise to share and questions they need answered. So if you are a business owner in the Capital Region, join us.”

Hoorah! Will be interesting to see how this develops. :)

“Ontario Provincial Police will launch a criminal investigation into the Elliot Lake mall roof collapse that killed two people and injured 22 others.”

Would be very sad if the collapse was intentional.

“A meeting of Syria’s splintered opposition in Cairo on Tuesday descended into scuffles and fistfights that will dishearten Western leaders calling for unity against President Bashar al-Assad.”

“A new report from Human Rights Watch out Tuesday identifies 27 detention facilities in Syria and details the arrest, detention, and torture of an estimated tens of thousands of people in the country since the beginning of the March 2011 uprisings against president Bashar al-Assad.”

“Colombia has decriminalized cocaine and marijuana, saying that people cannot be jailed for possessing the drugs for personal use.”

“Intermittent explosive disorder — a controversial mental illness marked by outbursts of uncontrollable rage — is so common among adolescents it affects one in 12 teens, a large new study finds… The findings suggest the disorder is affecting hundreds of thousands of youths — close to six million in the U.S. alone, according to a statement released with the study.”

So it’s not just teen angst.

“While it’s not as though hospitals have ever been lauded for their gourmet cuisine, the idea that you’re filling your body with the nutrients it needs to heal has certainly inspired more than one patient to force that last bit of rubbery mystery meat down the hatch. Because when you’re lying prostrate in a bed on wheels, IV firmly hooked into your right arm and your wellbeing in the hands of the people around you, it’s important to trust your health is being looked after from top to bottom. But according to the CBC, your gag reflex may have been trying to tell you something all along. According to a host of experts sourced by the news network, hospitals often use frozen, processed food out of cost and convenience — food that, naturally, lacks proper nutrition. It’s edible, but it’s not actually good for you.”

“The map shows that the top six tweet producers (for geocoded tweets, in absolute terms) are the United States, Brazil, Indonesia, the UK, Mexico, and Malaysia. The authors observe that just two of those countries — the US and the UK — are from the industrialized West and “are traditional hubs of the production of codified knowledge.””

Interesting results! Canada not in the Top 5 and colour-coded as “low.” Surprising.

“As CNET’s Lance Whitney is reporting, the latest browser market-share numbers from Net Applications show that Internet Explorer’s once-overwhelming lead is slipping. Except–well, the report still shows that Microsoft’s browser has more users than everything else combined.”

“Nearly 30 per cent of U.S. teenagers have sent a nude photo of themselves via text or email, according to a study suggesting that the practice of sending explicit digital missives is more prevalent than once thought.”

Cut it out, people! You don’t want that stuff hanging around the digital world.

“Apple has paid $60 million to settle a dispute in China over ownership of the iPad name, a court announced Monday, removing a potential obstacle to sales of the popular tablet computer in the key Chinese market… Apple Inc. says it bought the global rights to the iPad name from Proview in 2009 but Chinese authorities say the rights in China were never transferred. A Chinese court ruled in December that Proview still owned the name in China. Proview, which is struggling financially, asked Chinese authorities to seize iPads in an apparent effort to pressure Apple to settle.”

Quick what other “i” names can we come up with so we can get a money settlement when Apple needs to use it?!

“Japanese electronics maker Toshiba has been fined $87m (£55m) for conspiring to fix prices of liquid crystal display (LCD) panels in the US. It has been accused of holding meetings with other LCD makers in a bid to keep prices of the panels at a high level. The fine comes just months after Taiwanese firm AU Optronics was found guilty on similar charges.”

“You might have thought the federal government wouldn’t have to weigh in on an issue mainly popularized by Disney and 4-year-olds, but apparently you would be wrong. NOAA has made an update to its “Ocean Facts” site stating that mermaids do not exist, and “[n]o evidence of aquatic humanoids has ever been found.””

I still believe they’re out there! ;)

“Rising sea levels cannot be stopped over the next several hundred years, even if deep emissions cuts lower global average temperatures, but they can be slowed down, climate scientists said in a study on Sunday. A lot of climate research shows that rising greenhouse gas emissions are responsible for increasing global average surface temperatures by about 0.17 degrees Celsius a decade from 1980-2010 and for a sea level rise of about 2.3mm a year from 2005-2010 as ice caps and glaciers melt. Rising sea levels threaten about a tenth of the world’s population who live in low-lying areas and islands which are at risk of flooding, including the Caribbean, Maldives and Asia-Pacific island groups.”

We’ve screwed the planet beyond repair.

“According to NASA, Jack Scudder, who is a researcher at the University of Iowa, has found “hidden portals on Earth’s magnetic field [that] open and close dozens of times each day”. Some of them are open for long periods of time. Scudder says that these portals “create an uninterrupted path leading from our own planet to the sun’s atmosphere” 150 million kilometres away.”

“American actor Andy Griffith, best known as the folksy Sheriff of Mayberry, died Tuesday at his home in Dare County, North Carolina. He was 86 years old. The legendary actor, director and gospel singer was best known for his television roles as lead character Andy Taylor on “The Andy Griffith Show” and the kind but shrewd criminal defence lawyer “Matlock.””

I have little memories of watching him but I know a lot of people were sad to hear of his passing!

“A $2.2 million expedition is hoping to finally solve one of America’s most enduring mysteries: What exactly happened to famed aviator Amelia Earhart when she went missing over the South Pacific 75 years ago? A group of scientists, historians and salvagers think they have a good idea, and are trekking from Honolulu to a remote island in the Pacific nation of Kiribati starting Tuesday in hopes of finding wreckage of Earhart’s Lockheed Electra plane in nearby waters.”

Amelia Earhart’s story is soo fascinating. Wonder what they will find!

“Women who are infected with the common cat parasite Toxoplasma gondii may be more vulnerable to suicide, a new study finds, adding to the evidence that T. gondii or Toxo, as the bug is known, may cause subtle changes in the human brain that lead to personality changes and even mental illness.”

I think I’ll be okay! My kitties contribute to my life happiness meter, lol.

“This kitten has seen too many friends throw their 9 lives away because of their addiction to chasing a laser pointer, and he isn’t about to let it happen again.”

“A breaking news story so fresh there aren’t any facts. That’s not going to slow down the Onion as they report it anyway. It’s better to be first then right.” 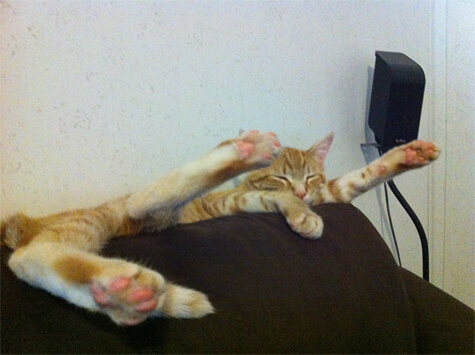 Linda Hoang is a Canadian blogger based in Edmonton, Alberta, who writes about travel, food lifestyle and pet topics. She's also a seasoned social media/digital strategist with a journalism background. Linda loves exploring the world with her husband Mike, eating their way through cities, supporting local businesses, and photographing Instagrammable Walls. She is the founder of the Edmonton International Cat Festival and a fur-mom to two cats and two dogs.
PrevPreviousSocial Media Column: Podcast rocks
NextClicks of the Day: Wednesday, July 4, 2012 Edition!Next