“Edmonton is one of the youngest cities in Canada, say new Statistics Canada figures. According to Statistics Canada’s 2011 age and sex census released Tuesday, 31% of Edmontonians are between the ages of 25 to 44. The census confirms the City of Champions is attracting young people “in the prime of their careers and family development” said John Rose, the city’s chief economist. ‘Many Edmontonians are starting households, making for a very bright outlook in terms of income growth, house building and consumer spending,’ said Rose. ‘This is an age profile suited to continuing strong growth.'”

Making for a bright outlook indeed.

“Wanted: “’northside-types” for new Edmonton reality TV show. The TV show called Northsiders is being produced by Ignition Media Productions and is touted as reality show in the same vein as Big Brother and Jersey Shore.”

“While the province hasn’t changed its stance on directly funding the downtown arena, the mayor hopes it could free up funds – that could go on to fill the $100 million funding gap in the project. The Conservative Government is considering putting more funding for infrastructure towards cities in the future – as the province has predicted a budget surplus of more than $5 billion in three years. Municipal Affairs Minister Doug Griffiths said the province is looking at the option in the future, said doing so would follow up on a commitment made by the provincial government in the past, that he said was stopped due to the economic slowdown.”

“Police discovered a second package containing a body part on Tuesday, hours after a stunned Conservative receptionist opened a blood-soaked box containing a human foot that had been delivered to the party’s headquarters. On Tuesday night, investigators carried out the second package in a brown paper bag from a Canada Post sorting plant through which every letter or package sent to or from Ottawa travels. Police X-rayed the bag before they opened it to find a hand.”

“Canada’s population of seniors is higher than ever before thanks to the nation’s aging cohort of baby boomers, the latest census data reveals. Just as demography experts had predicted, the 2011 survey released Tuesday shows the population of people over the age of 65 has ballooned and is expected to keep growing. Moving forward, this massive influx of seniors is expected to influence policy decisions related to hot-button topics ranging from healthcare to pensions.”

“Child poverty in Canada is more prevalent than the overall national poverty rate, according to a new report that ranks 18th among 35 industrialized nations when it comes to the gap between the two figures. The country falls even further behind when it comes to the number of children who are actually considered poor, the report released by UNICEF Canada found.”

“The latest mutilated cat was found on Sunday, bringing the total number of dismembered cats to seven in the past two weeks and 22 since June 2011.”

I couldn’t really read through this article because it makes me too sad… this is horrible. People can be so sick.

“Horrific photos have emerged allegedly showing the badly mauled face of a man who fell victim to a drug-fueled cannibal-style attack in Miami. Authorities are still looking for more witnesses to the grisly incident in which a naked man refused to stop chewing on the face of another naked man on a busy highway ramp, despite being shot by police, was finally shot to death.”

This story deserves to move up from ‘weird/other news’ to world news. Now can someone please interview a zombie expert about this… before it’s too late.

“The United States and 10 other countries expelled Syrian diplomats Tuesday after blaming government forces for last week’s massacre of more than 100 villagers in central Syria, but they again stopped short of calling for more aggressive action to end the violence. Despite expressions of outrage and agreement that the situation in Syria has reached what U.N. special envoy Kofi Annan called a “tipping point,” the Obama administration and its major allies said they would continue to rely on diplomatic, political and economic pressure against Syrian President Bashar al-Assad.”

I feel like this diplomatic, political and economic pressure is NOT working.

“At least 16 people died, one was missing and 350 were injured after a 5.8-magnitude earthquake shook northern Italy Tuesday, Italian authorities said. The earthquake, which forced thousands of people from their homes, came nine days after a 6.0-magnitude quake struck the same region, killing seven people.”

“The rates of both cesarean sections and childhood obesity have risen steadily in the U.S. over the last couple of decades. Now, a surprising new study suggests the two trends may be linked. After following 1,255 mother-and-baby pairs from pregnancy through the child’s third birthday, Harvard researchers found that by age 3, 16 percent of children born by C-section were obese, about twice as many as those delivered vaginally.”

“Canadian kids have once again earned an F for “active play and leisure” on a report card evaluating their physical activity levels. The 2012 Active Healthy Kids Canada Report Card on Physical Activity for Children and Youth finds that Canadian kids are spending a pitiful amount of time playing, with 46 per cent of kids taking part in three hours of active play every week or less.”

Perhaps a solution is:

“Children changed their exercise level about 10% to better match those in their circle; children who hung out with more active students were more likely to increase their physical activity levels, while those who befriended more sedentary children became less active… The results are encouraging also because they suggest a potentially inexpensive and effective way to change children’s behavior. Rather than relying only on organized exercise programs or drowning kids in messages to get moving, perhaps a subtler approach — introducing sedentary kids to more active ones — might help more kids get off the couch.”

“A new cyberweapon described as a “highly sophisticated malicious program” has been discovered in the Middle East, according to a Russian Internet security firm. According to a blog post from Kaspersky Lab, the virus is on the attack in several countries in the region, including Iran. Dubbed “Flame,” it has the ability to carry out cyber espionage and can steal information such as computer display content, information about targeted systems, stored files and contact data. The virus can even reach into a nearby Bluetooth-enabled cellphone and suck data from the device.”

“Struggling BlackBerry maker Research In Motion warned Tuesday that it will have an operating loss in its current March-to-June quarter and said there will be significant layoffs this year.”

“The community might feature a celeb such as Jack Black or Joss Whedon once in a blue moon, but what I find most appealing by IamAs are the average regular folk who open themselves up to questioning. I really enjoyed learning about my favourite TV show, The Daily Show, thanks to an intern who revealed behind-the-scenes tidbits about Jon Stewart and the writing crew. There’s the fellow who lost his dad to a stroke and is walking across the U.S. to honour his memory. Or the 24-year-old living with albinism. Or the retired drug dealer. Or the Iraqi who lives through horrific war. And this is just the past four days. What is compelling about these interviews is the unfiltered truth. No editor is hand-selecting what questions are answered. It’s up to the interview subject, who truly says Ask me Anything! (thus, AMA). The editorial gatekeeper is bypassed to bring readers an honesty you won’t find anywhere else.”

I’ve always believed everyone has an interesting story to tell and this supports that. Very cool.

“Move over, brides! The wedding industry is getting well groomed. Rules of engagement are changing as grooms mark their territory in a traditionally women-only industry and say “I do” to planning the big day… It’s no longer her day, it’s their day, chorus wedding planners, who are seeing growing groom interest and involvement in all things nuptial, as vendors offer miles of aisles of groom goodies, including custom-made suits, fast cars and man caves. The shift in the past five years has been incredible, says wedding expert Karina Lemke. Many grooms are getting in the game from the get-go.”

Lol. I ask for Mike’s opinion…

“Bluefin tuna caught off the US coast have been found to contain radioactive material from Japan’s quake-struck Fukushima nuclear plant, according to a new study. Researchers found “modestly elevated levels” of two radioactive isotopes in 15 bluefin tuna caught off the coast of San Diego, California in August 2011, according to the study published online Monday by the Proceedings of the National Academy of Sciences (PNAS). The researchers said the elevated radioactivity posed no risk to public health as the observed levels were more than an order of magnitude lower than the Japanese safety limit and were lower than other naturally present isotopes.”

“Modern day birds may simply be dinosaurs that never grew up, researchers say. A comparison of fossilized skulls of juvenile dinosaurs with those of birds shows remarkable similarities, adding further evidence to the growing consensus that birds are evolutionary descendants of dinosaurs. A team from Harvard University reported online in the journal Nature that for some as-yet-unknown reason, some dinosaur infants began to mature much more rapidly than normal.”

“The world’s biggest and most powerful radio telescope, designed to lead the search for life on other planets, will be spread across South Africa, Australia and New Zealand. Members of the Square Kilometre Array (SKA), a $1.9-billion radio telescope that will investigate the greatest mysteries of the universe, made the decision at a meeting in Amsterdam Friday.”

Cool. Hopefully we connect with the lifeforms out there.

That’s quite some time.

“The BBC apologized to viewers after mistakenly showing a graphic from the hit computer game Halo in place of the UN Security Council logo. In a report last week on the continuing deadly unrest in Syria, the British public broadcaster ran a large graphic behind presenter Sophie Raworth as she read the news, The Guardian reported. Unfortunately, instead of the Security Council logo, viewers were shown the badge of the United Nations Space Command, the military agency depicted in popular interstellar war game Halo.”

“Every day for the past 35 years, the fabric of his tie has been an exact match to that of her dress. They have 146-custom made outfits matching just like that. ‘We don’t dare go somewhere without (being in) matching outfits,’ Mel Schwanke, 86, told ABC News affiliate KETV 7 in Omaha. ‘Every day, my tie matches her dress.'” 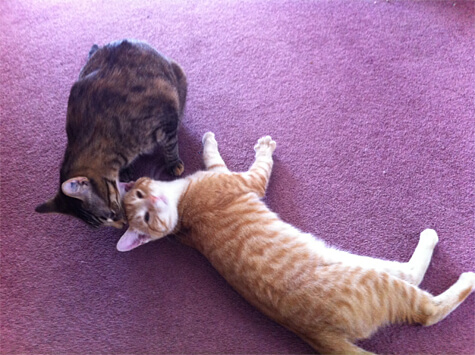 Linda Hoang is a Canadian blogger based in Edmonton, Alberta, who writes about travel, food lifestyle and pet topics. She's also a seasoned social media/digital strategist with a journalism background. Linda loves exploring the world with her husband Mike, eating their way through cities, supporting local businesses, and photographing Instagrammable Walls. She is the founder of the Edmonton International Cat Festival and a fur-mom to two cats and two dogs.
PrevPreviousPhoto of the Day: Tuesday, May 29, 2012
NextClicks of the Day: Wednesday, May 30, 2012 Edition!Next