“A 36-year-old Edmonton man is facing charges of sexual assault, possessing and making child pornography. Police say the offences were allegedly committed against the man’s niece, who is now five-years-old.”

“In an effort to recoup healthcare costs connected to smoking, the Alberta government is preparing to file a multi billion dollar lawsuit against tobacco companies.”

“The unpredictable nightly protests that helped spur a government crackdown have largely been a Montreal-only affair — until now. Since Premier Jean Charest passed a law last week limiting protests in the province, defiant demonstrations have popped up in cities not known as hotbeds of activism. Small groups from Granby, south of Montreal, to Jonquiere, north of Quebec City, have joined Montrealers in taking to the streets with pots and pans to protest Bill 78. Their message is clear: This conflict is not just about tuition anymore.”

I believe Edmontonians are staging something in a couple weeks in solidarity with Montrealers on this.

“Montreal police have issued a Canada-wide warrant for a 29-year-old male model and adult-film actor in connection with a dismembered torso found in their city and two body parts found in the mail in Ottawa.”

“An Edmonton webmaster may have posted video footage online of a killing linked to the mailing of dismembered human remains to political addresses in Ottawa and Montreal this week. In the days leading up to the discovery of the foot, Edmontonian Mark Marek was told a video on his website could be footage of the murder. The horrific online “shock” video Marek posted online is entitled “1 Lunatic 1 Ice Pick” and contains the apparent murder, beheading, dismemberment, cannibalism and necrophilia of an unidentified Asian man by another man.”

“A homeless man whose face was mostly chewed off in a bizarre, vicious attack faces a bigger threat from infection than from the injuries themselves, according to experts on facial reconstruction. He will require months of treatment to rebuild his features and be permanently disfigured. Though gruesome, such severe facial injuries are generally not life threatening. The most serious risk to Ronald Poppo as he remained hospitalized Wednesday were germs that may have been introduced by the bites of the naked man who attacked him. One of the 65-year-old’s eyes was also gouged out.”

This continues to be such a gruesome story.

“The consumption of shark cartilage supplements and shark fin soup has been linked to the development of Alzheimer’s disease and ALS (Lou Gehrig disease), due to biomagnification of a toxin produced by algae.”

“Driven in part by commercial interests, doctors around the world are overdiagnosing and overtreating illnesses in healthy people, an editorial published in the British Medical Journal says. Aside from being a threat to human health, treating people unnecessarily wastes health-care resources, wrote Ray Moynihan, a researcher at Bond University in Australia.”

“You know that smell in retirement homes and your grandmother’s house? Mothballs and stale air may not be entirely to blame. In a new study, researchers have confirmed for the first time that older people have a recognizable body odor that can’t be fully explained by grooming, diet, or other environmental quirks. In fact, the study found, this “old person smell” is distinctive enough that young adults can more often than not identify an old person by body odor alone.”

“Women who work night shifts have an increased risk of developing breast cancer, according to doctors at the Danish Cancer Society in Copenhagen.”

“Zynga is building a portfolio of mobile, casual and social games across a variety of social networks and platforms, including, most notably, Facebook and iOS. It has at least 100 million monthly players across its Farmville and Citiville games on Facebook and has expanded its mobile reach significantly with the acquisitions of Draw Something and Words with Friends. But Zynga Founder and CEO Mark Pincus has bigger plans: He wants to be a network.”

“Social Media Day is exactly one month away! On Saturday, June 30, digital enthusiasts will hold meetups across the globe to celebrate the one thing that unites us and keeps us in constant contact: social media.”

Anything being planned locally??

“Beware, teenage texters and overworked professionals. If you stare at your phone for too long, you just may end up with a case of “smartphone face.” At least, that’s what a bunch of British cosmetic surgeons say. British cosmetician Dr. Mervyn Patterson explains exactly what the condition consists of in the London Evening Standard: ‘If you sit for hours with your head bent slightly forward, staring at your iPhone or laptop screen, you may shorten the neck muscles and increase the gravitational pull on the jowl area, leading to a drooping jawline.'”

“Several websites, including this one, have published articles recently about how journalists are using Pinterest. But none of these offers data-based analyses that measure whether newsrooms are using Pinterest to engage effectively with readers. As a way of measuring engagement, follower counts are a basic metric. But knowing how critical the tweet to retweet ratio is for measuring engagement on Twitter, I sought to apply this principle to Pinterest. I wanted to compare average repin to pin ratios for a variety of local and national news organizations.”

“SETI hunter Jill Tarter says Sir Stephen Hawking is wrong about aliens coming to attack or colonize Earth. If aliens can get here, Tarter reasons, they’ll be advanced enough not to need slaves, food or other planets.”

We won’t until it happens now will we?

“Just like its U.S. sibling, Big Brother Canada will feature a group of diverse castmates living under the constant watch of TV cameras. Chairman and CEO of Insight Productions and Executive Producer of Big Brother Canada, John Brunton, said the franchise presents an opportunity to make serious waves north of the border.”

I have never been interested in Big Brother but this is huge news for a lot of people, lol.

“A crowded reception room at UBC plays havoc on Mits Sumiya’s hearing aid. He leans in, fiddling with the device’s remote, eager to repeat his story of how he was pulled from the University of British Columbia and forcibly interned along with roughly 21,000 other Japanese Canadians during the Second World War. At 89, he’s one of the youngest remaining to receive the honourary degree from UBC 70 years after 76 Japanese Canadians were exiled from the B.C. coast.”

“Greg Rubar has been working at D’Amico’s Italian Market Café in Houston for 16 years. This past week a couple, who have been coming into the restaurant and waited on by Rubar for eight years, left him a $5,000 gift in cash after their usual Saturday lunch. The bill for their meals? About $27… The couple had known that Rubar’s car had been ruined on a flooded roadway and wanted to help, so they gave him 50 $100 bills.”

Wow can you imagine??

It’s about 40 seconds longer than it needs to be but it’s pretty cute, haha. 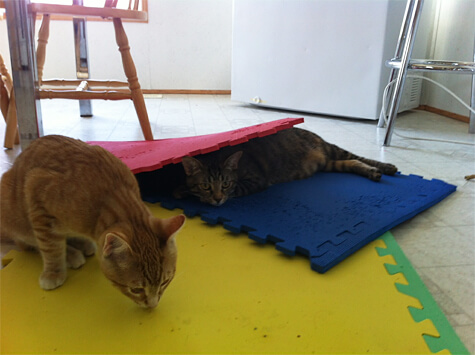 Linda Hoang is a Canadian blogger based in Edmonton, Alberta, who writes about travel, food lifestyle and pet topics. She's also a seasoned social media/digital strategist with a journalism background. Linda loves exploring the world with her husband Mike, eating their way through cities, supporting local businesses, and photographing Instagrammable Walls. She is the founder of the Edmonton International Cat Festival and a fur-mom to two cats and two dogs.
PrevPreviousClicks of the Day: Tuesday, May 29, 2012 Edition!
NextPhoto of the Day: Wednesday, May 30, 2012Next